Leipzig After Action report Part I

For starters I would like to thank Tom and his lovely wife Laura for allowing us to use a (small) portion of beautiful home to stage the game. This is especially important as Tom and family has just moved to Michigan from Texas in the week before. They were gracious and generous hosts. Thank you again!

I have long heard of the famous quote by a British soldier regarding the battle of Waterloo, "As for myself all I know it that I spent the day lying in the mud while every scoiuyndrel with a horse rode over us". I do believe that I now have an inkling of what he was talking about. My fight for Connewitz and its environs left me with only a vague understanding of events elsewhere on the battlefield. I will post further pictures later so the other generals can provide their insights.

As events played out for the big Leipzig refight we came up short-handed on generals so we trimmed the game down to just the southern front. Even then we found ourselves commanding more than one Corps each in several cases. Perhaps the weekend of the 4th of July wasn't the best choice after all.

I commanded Merveldt's troops facing Connewitz, R.U.P. commanded Poniatowski's troops facing me. The Austrians were south and east of the river trying to cross on two bridges in to the teeth of the deployed French and Polish troops who were wisely deployed just out of close cannon range from the bridges, effectively forcing me to pass through the defiles into a "field of death". 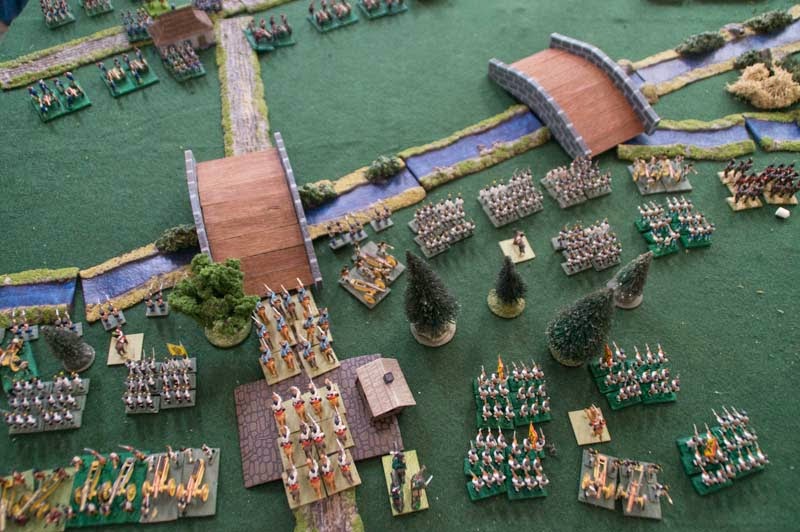 the Austrians, nice and orderly, prepare to cross the bridges
Read more »
Posted by Anton Ryzbak at 6:28 PM 1 comment:

Players, and interested observers:
It seems that I have missed some of your email addresses, if you have not gotten an email from me with Tom's new address please send an email to me at daftrica89@yahoo.com with the title "Leipzig location" and I will send you Tom's address in a reply. We are aiming for 0900hrs Saturday 5JUL14 as a start time so you all will have to control your intake at my party on Friday!
Posted by Anton Ryzbak at 9:38 PM No comments: