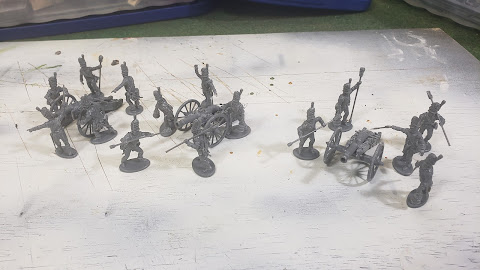 just waiting for good weather to spray them

After almost a week of alarums and excursions I had a chance to sit down and finish assembling these figures. I am a big fan of plastic minis because they allow for variety in positioning making my minis both more active-looking and personally "mine". This was a difficult case with this set. The Victrix figures are superbly sculpted, have excellent proportions and are very well cast but the sculpting allows for little choice in posing the minis (this is compounded by the fact that few choices of spare arms are offered with the set). I had to try out a great many combinations of arms and head positions to achieve my standard "no two guys alike". But, in the end, everything came together rather well. 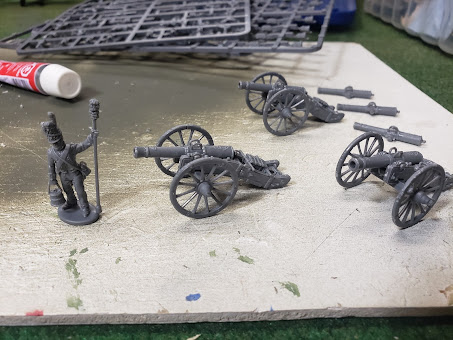 at least there aren't a lot of gunners!

While rummaging around in the Pile of Guilt I found that I had purchased a set of Victrix French artillery. Thinking that my Guard Chassuers have been alone at the task for too long I decided to build and paint these guys. The guns went together like a dream but the figures have specific but arcane instructions as to assembly. More to follow as I make progress.

Time to move some mountains (and hills, trees, buildings etc) ! This weekend is Bastion Gaming Center's Terrain Blowout Sale. 15% off prices as marked on the full array of terrain. If you need some 40K stuff for that Kill Team you just finished painting, or a load of Sarissa MDF to fill that WW2 table you can get it there. Store opens at noon, sale lasts until closing time at 9pm.

Posted by Anton Ryzbak at 8:10 PM No comments:

Here is your chance to ditch all of those old projects that are never going to get finished and make a little coin along the way (maybe even start a NEW project the will "certainly take top priority"). Painted, unpainted, still in the box or never even opened; bring it all on down! 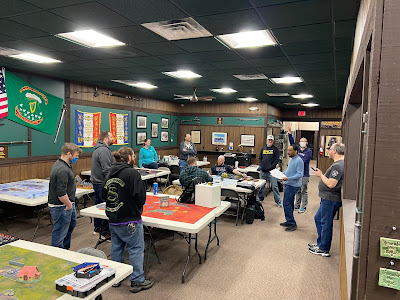 plenty of room in the Main Gaming Hall

Bastion Gaming Center is hosting a Swap Meet/ Flea Market on Saturday April 16th from noon until three in the afternoon in the main gaming hall. Sixteen 6'x3' tables are available. All gamers and hobbyists are welcome, tables are free but space is limited so get there early to ensure that you can claim your spot.

Often considered the "junior partner" among the Axis powers in WW2 the Italian army had a longer battle history and wider experience than the Germans. While Adolph and his gang were Anschlussing a friendly Austria  the Italians had been fighting campaigns in Africa against Ethiopia, finishing the conquest of Libya and meddling in the Spanish Civil War. The Italian army had no lack of bravery, experience of battle or of fighting in wildly different climates. What they did lack was capable commanders and an advanced armaments industry, this led to them becoming less combat effective as the onset of war forced the pace of weapons development.

This set of minis will allow you to build Italian forces for most of the pre-war conflicts as well and most of the troop types that saw service during the Second World War. The models are cast in the now-familiar soft gray plastic that give very precise detail and exhibits no flash and very few mold lines. Included in the kit are the dizzying array of headgear worn by the Italian army between 1936 and 1943 (some might start before and last longer for all I know), pith helmets, Alpini caps, steel helmets along with an assortment of feathers to mark them as Bersaglieri. Also included are  shovels and axes in a surprisingly large quantity. A particularly nice addition is a water-cooler MMG on the smaller command sprue, complete with tripod and arms with hands holding the grips, nicely thought through and parted-out. 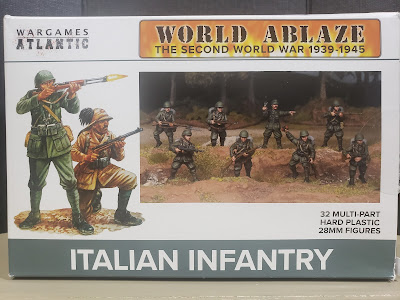 Among the many units in the German army that laid claim to the status of "elite" few had a better claim than Panzer Lehr. Composed of veteran  (and very often decorated) soldiers drawn from German forces these troops were first assembled into a school unit but ended up being thrown into the maelstrom of combat that was the Normandy Campaign. Almost destroyed there they were withdrawn only to be used in the ill-fated Ardennes Campaign known to the Western Allies as The Battle of the Bulge. A distinctive part of their dress was the panzer-style crossover jacket rather than the usual infantry blouse. This set is molded in the now-standard soft gray plastic that provides a smooth finish and displays detail very well, no flash and very little by way of mold lines ca be seen.

Included in this set is the full array of Late War German infantry small arms; rifles, pistols, SMGs  and the ever present MG42. You get a bit of anti-tank ability with the included Panzerfausts and there is even enough spare parts to assemble these models as Panzer crews (seen fighting on foot at the Battle of Arnhem). There is even a jerry-can!

The proportions and posing are natural and effective and the modeling of the uniform captures the comfortable loose fit of the German gear. Molding of the weapons is precise and crisply detailed, 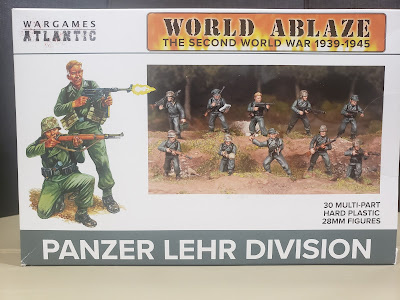