This being one of my favorite periods and once again having just Joe as an opponent it seemed a perfect time to give The Pikeman's Lament rules another go 'round. We agreed on standard size companies  but threw an added spin on it by gaming with my (ancient) Minifigs 15mm ECW forces. A little playing around with the look of things we decided that each base of figures would stand in for two figures under the rules; this gave a good looking game and matched the physical space that the larger 28mm figures would have occupied thus saving us from having to scale the moves and ranges. The battle was a heads-up fight to make sure things worked as we hoped they might. 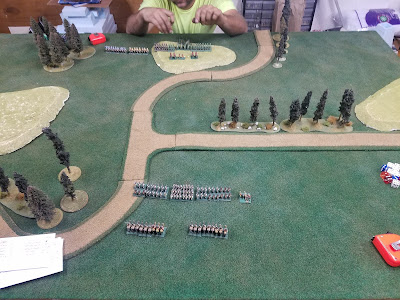 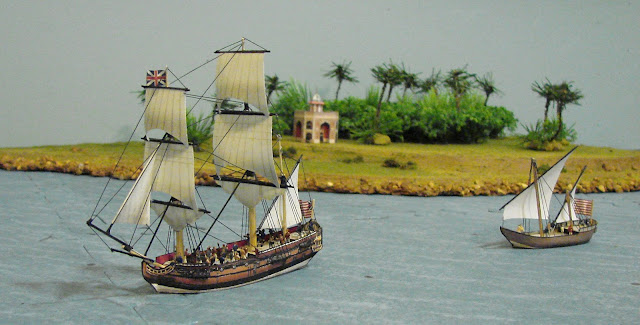 Look at the models then guess the scale then follow this link to be truly amazed!
Then back up a page to his albums and prepare top be awestruck! Talent like his is absolutely humbling.

The only person that could make it for the game on the 19th was my rules-junkie buddy Joe. Knowing this I decided that we would give Pikeman's Lament a try. Everybody else in my gaming group has pretty well made up their mind about the pike and shot era (and in a very negative way, I might add).
These rules are derivative of the Lion Rampant system but have enough differentiation to feel rather specific to the period. In reading the rules one of the scenarios gave me the idea for our game; a redoubt has been constructed in front of the main gate of the fortress and last night the big guns have been moved into position, these guns must be destroyed before they can blow in the the gate and allow the besieging army access to the fortress. To this end a desperate force of volunteers has been assembled and will attack at first light. They must place an unwavering unit on each gun for a full turn to spike the barrels and burn the carriages, anything else is failure. 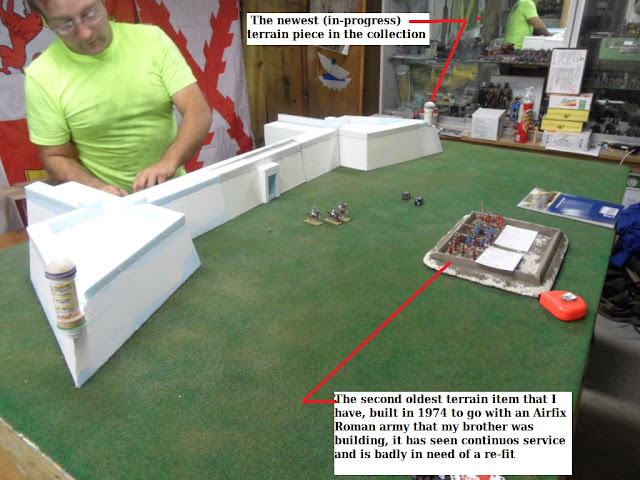 Actually a couple of people have expressed interest in playing games from the Neulandia Campaign so it looks like we will be running some VSF craziness.

First up Her Britannic Majesty's Forces will show the bandits on Vectis what proper hospitality looks like (tea and crumpets served a bayonet point, I am guessing)

Next we have the Mexicanish Empire's initial exploration of their newly granted lands, just so The Housemartin can show off his freshly painted soldiers. (Housemartin please bring your whole force so we can do an "Up close and personal" post on your unique force, you too Joe, and you as well R.U.P.)

Third will be the  (hopefully) final encounter between the Prussians and the rebellious Malagassian upstarts.

And, because all of that should take less than three hours I encourage everyone to bring 36 points of their favorite VSF tank/walker/War-car etc for a free-for-all battle as a nightcap. If you don't have enough models I have lots of stuff left over from the D.O.D.O. DampfPanzerLandSchiff Korps so I can help fill in any gaps.

Posted by Anton Ryzbak at 12:53 PM No comments:

Having finished the fun part of the project I am now faced with the essential but hugely tedious task of cladding the surface with card. This process involves covering the model with glue and sticking index card weight paper over the surface. I find that this greatly strengthens the model and helps the foam resist dings and damage in handling. This is neither interesting to see or easy to photograph so I will refer my gentle readers to the posting on my efforts while building Fort Matanzas. It will take some time to complete this step so I will leave you with a photo or two before I return to the workshop. 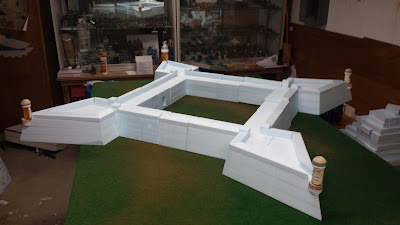 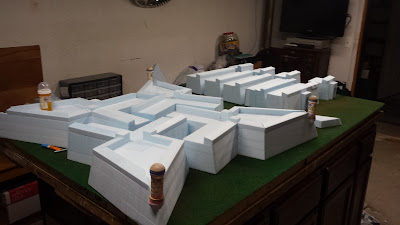 and storage is going to be an issue too

Of Towers and Gateways

I had a moment to spend on the Starfort. Operationally unprepared to start cladding the fort in card I opted to build a few of the details that make it scream "Spanish!" Corner tower were a must and the spirit of the Baroque era demanded some sort of fancy gateway. While I was contemplating the off-cuts pile it occurred to me that if I made tiny sections of wall that would connect the bastions to one another it would save a lot of space on the table. There was a handy heap of blue board in 5"x5" squares. These were left over from the build phase and were exactly the  right size for wall segments. So, off I went. 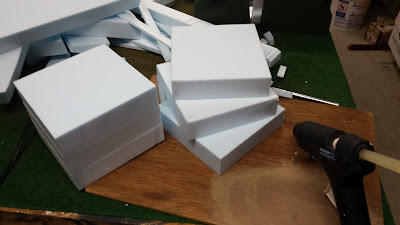 first I dug out my old Nemesis, the hot glue gun, and glued the squares into three-high stacks
(this is exactly wall height)

Of Parapets and Such....

Having completed the rough shape of the bastions I now needed to add the all-important parapet (that bit of the wall that the soldiers were actually protected by). I cut strips of foam to correct shape and then glued them to the top edge of the bastion, mitering the corners as I went. Below you can see one of the bastions with its parapet installed. 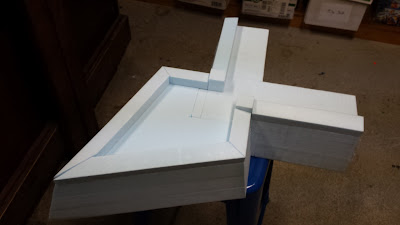 cutting, trimming and installing the parapets took longer than building the bastions did
Read more »
Posted by Anton Ryzbak at 4:27 AM 2 comments:

Further Progress on the 28mm Starfort

OK, for once I turned down overtime at work and had a whole glorious day with nearly nothing to do with myself. Shunning the magnificent sunshine I descended into the depths of the Anton's Wargames Workshop to address unfinished project pile. Looming (literally) over the rest of my many "in-progress" efforts was the vast blue bulk of the starfort. I grinned and set to work, below you can see the fruits of my efforts. 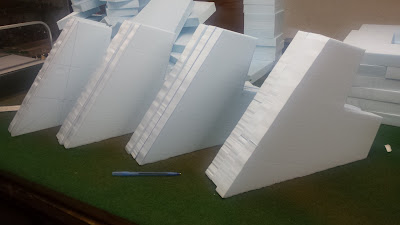 the rough-cut bastions,these are slightly wider than the prototype,
apparently math DOES matter