This game was on the table next to the Return of Ragnar, I got some good shots but wasn't able to follow the action. It looked fabulous and the players were enjoying themselves.﻿ 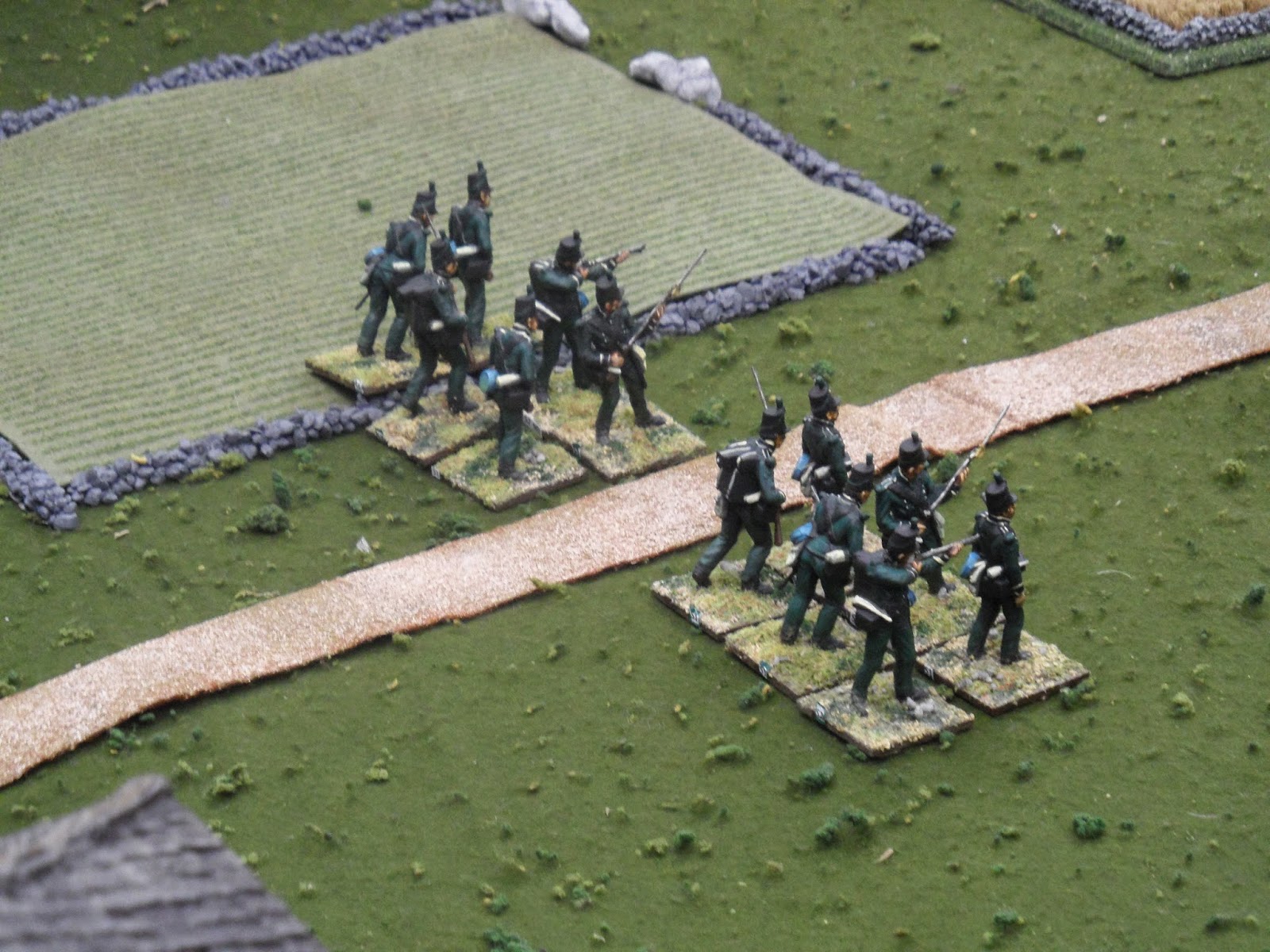 Just a collection of pictures from the con, not a lot of notes but they are attractive all the same﻿ 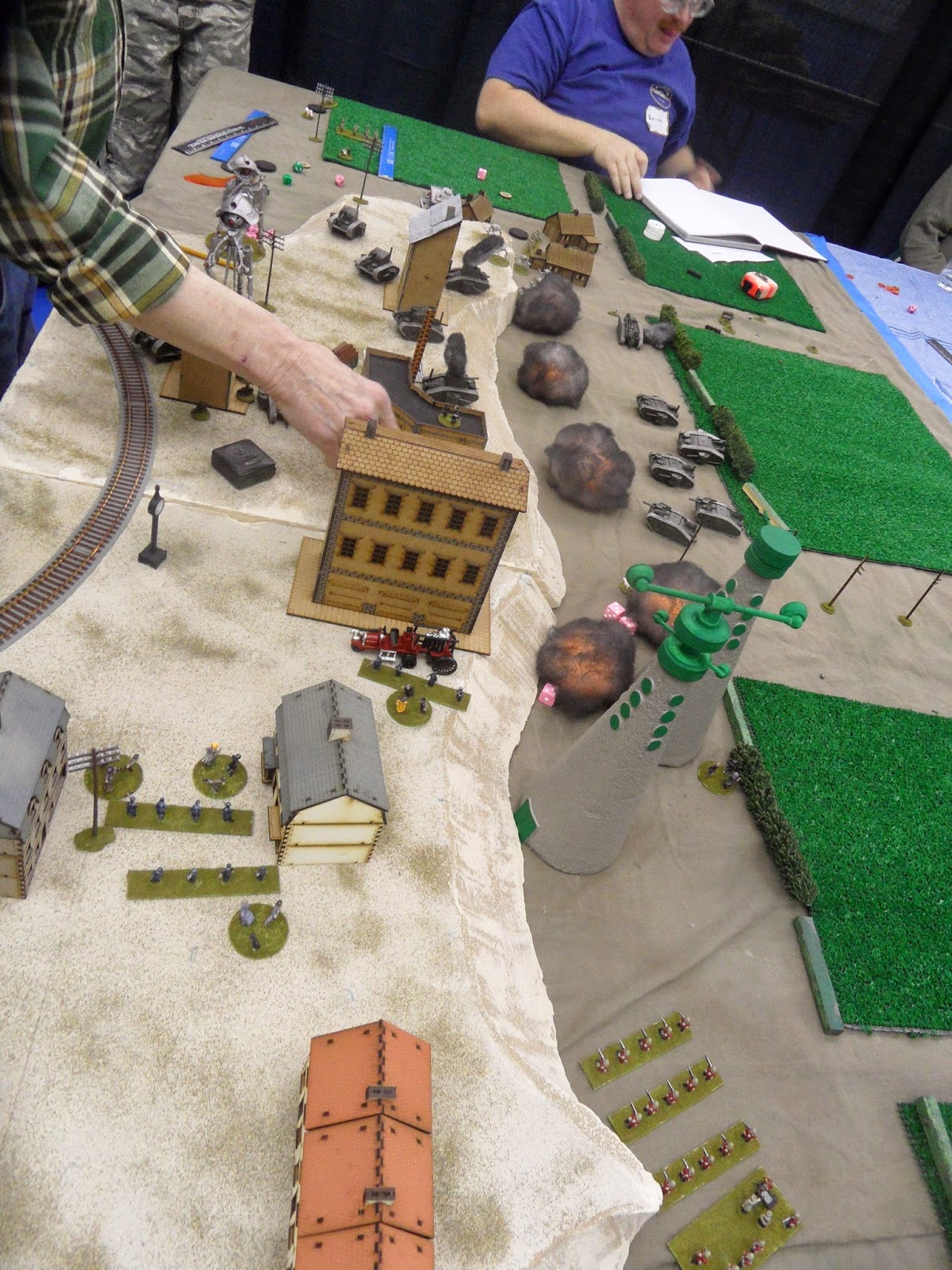 the Housemartin's "All Quiet on the Martian Front" game, cool models, neat scenario,
I understand that it didn't go too well for the Martians due to a series of unfortunate die-rolling
Read more »
Posted by Anton Ryzbak at 10:37 AM No comments:

B'Maso! - Tip-Toe Through the Biergarten

My apologies for this being stuck in "draft" for so long that I can't remember too much of the game. This was another one of R.U.P.'s lushly pretty B'Maso games that involved a multi-layered scenario with multiple twists in the plot. I led the FFL force in an attempt to free hostages from the brewery office  (the yellow building with a parking lot in the upper right of the picture below). Of course things turned pout differently. My notes are open to revision by any player that recalls this differently, please reply in the comments section.﻿ 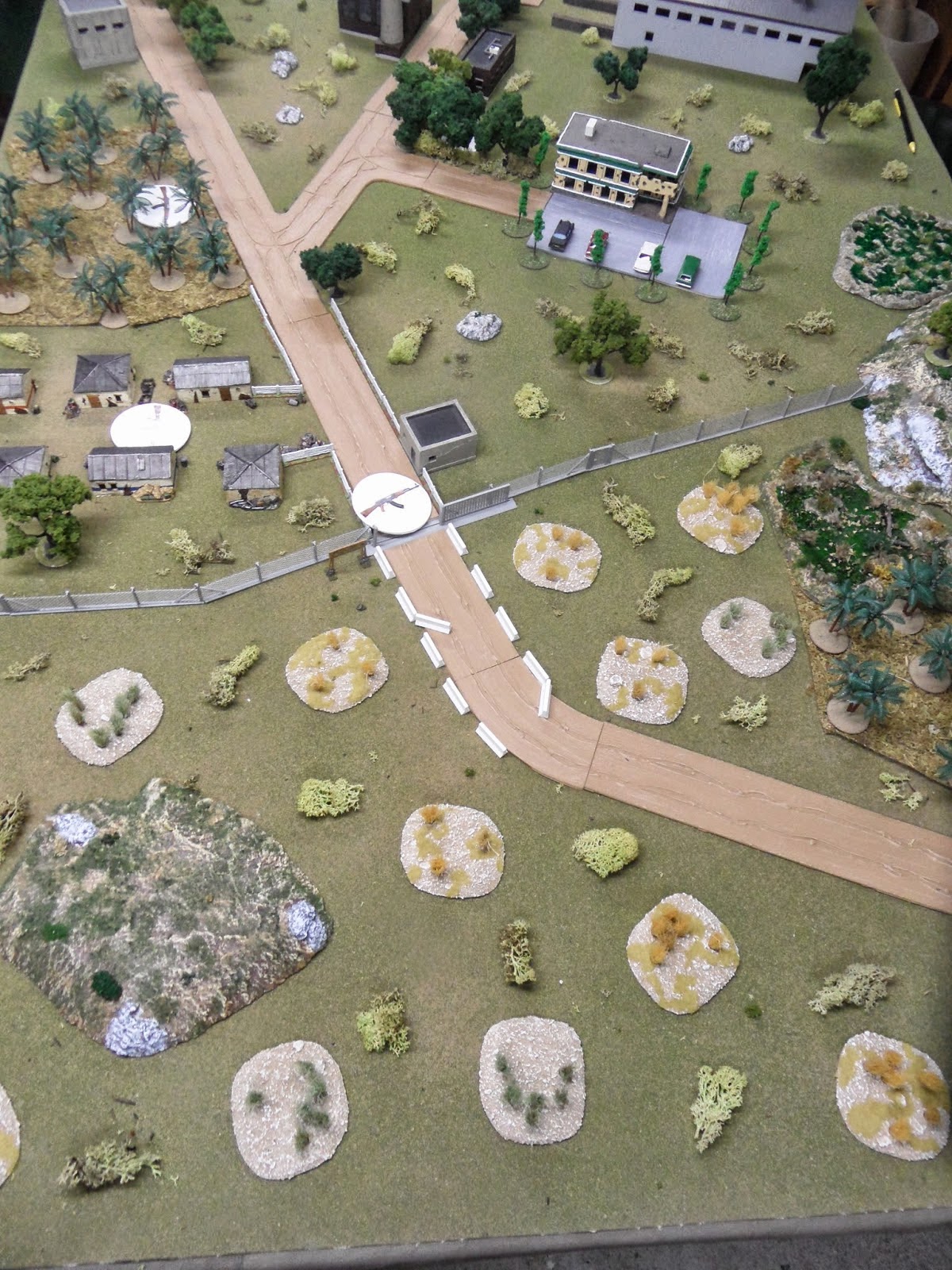 what we upon arrival, just one blind at the sentry post,
a couple more further into the compound
Read more »
Posted by Anton Ryzbak at 10:01 AM 1 comment:

I hope the past year has been happy and fruitful for all of you and that next year will be the same.

These sort of games always get me interested, they look so much like the old 3-D drawing in the Time-Life Civil War series that I start thinking about finally getting serious and painting the mountain of minis in my basement. A truly lovely game, Lowell Hamilton's games are always a delight for the eye. Once again I was busy elsewhere and unable to follow the action but it sure looked great!﻿ 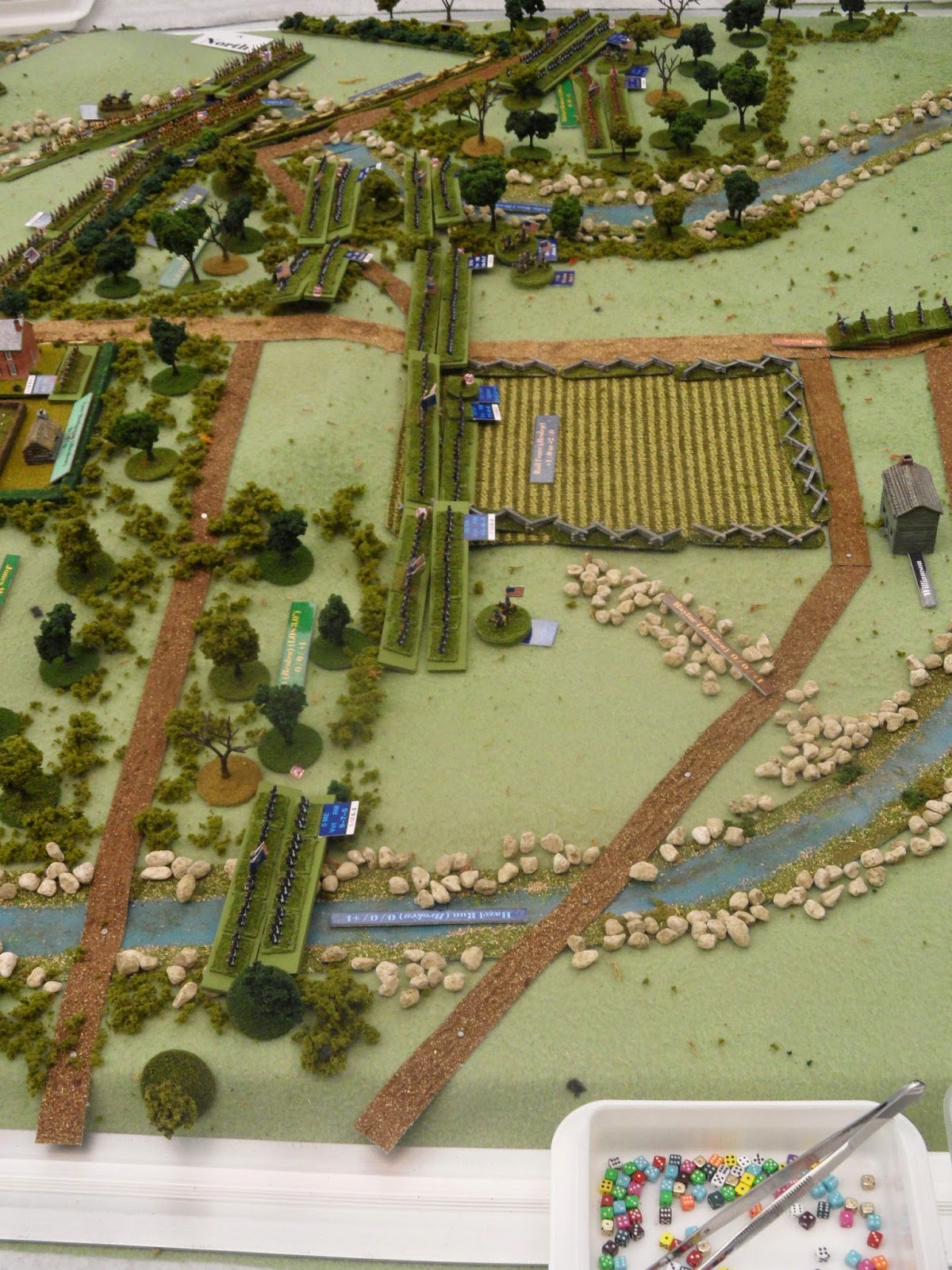 Certainly one of the prettiest games at the Con but I was ties up and could only manage a few photos. One of these days I am going to a Con and just reporting instead of running/playing games. This was lovely; models figures and the material aspect of the games was of top quality as well. Everybody involved seemed to be having a blast so the rules and gamemaster were up to standard as well.﻿ 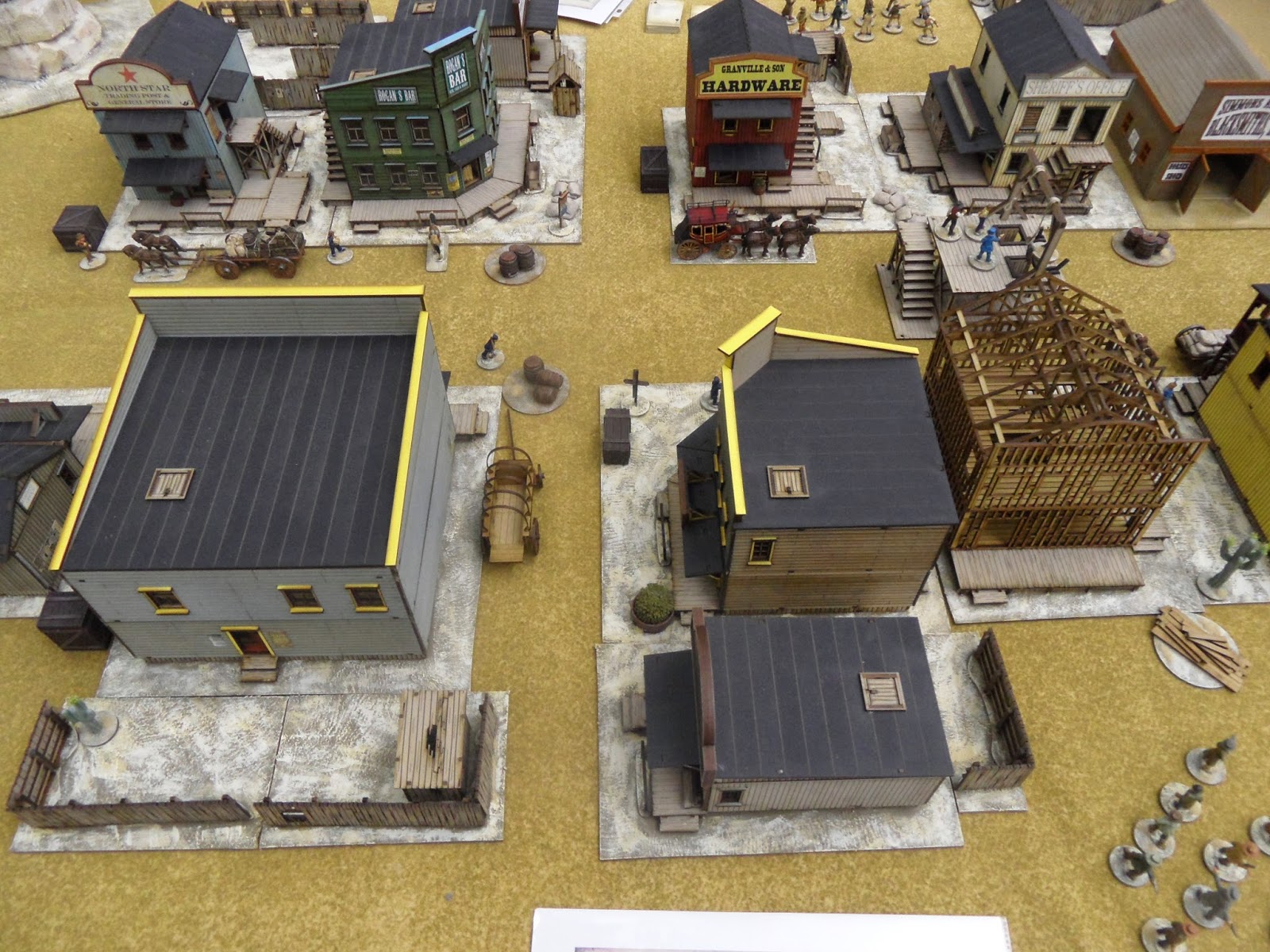 I particularly liked the unfinished structure,
before laser-cut MDF this would have been an insanely tedious and fragile model to build!
Read more »
Posted by Anton Ryzbak at 12:00 PM 1 comment:

Thoughts on re-starting a VSF campaign

My Daftrica campaign collapsed a few years ago after a good run, we were in campaign year seven but too many people had dropped out or were so slow that they were effectively not participating any more. It passed away quietly of apathy. What it also did was leave us with large collections of Victorian/VSF figures. Recently J&R, RUP and I have been discussing launching a new VSF campaign taking into account lessons learned from the previous campaign. Here are some of the primary points;

1. Massively simplified economic system
2. A map that only shows known areas, all the rest of our new "Dark Continent" will remain unknown to all but the gamemaster.
3. Reduced size armies and starting economies
4. Simplified map movement and campaign year

With these objectives in mind we are considering inviting people to join. There will be hard and fast rules regarding participation and timeliness. You must possess your own army to play (Victorian/VSF only, sorry about being snobs but re-naming a WW1 army just doesn't cut it, and people with "skin in the game" seem to be a lot more committed than casual participants). Basic math skills a must (we will be checking your budgets) and the ability to play twice a month are also minimum requirements.

This launch may not come off but I would like to see how much interest there is out there. Please reply in comments.