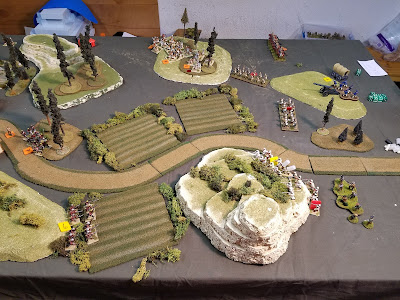 oldSarge dropped by on Sunday and we got his year closed out in the Neulandia Campaign; two hard-fought battles in which he caught the Bandits in the open and then chased them into their mountain hideaway.  The next opportunity I have for gaming is Thursday evening at 7pm.

Ideas on games, period, or which rules are open at this moment.
Posted by Anton Ryzbak at 10:29 AM No comments:

Somewhere in Africa......B'Maso After Action report

Once again Rich Uncle Pat has graced us with one of his cleverly contrived and beautifully presented games. This outing involved a stolen aid convoy, foreign mercenaries, rebels and an invasion by an aggressive neighbor. So, in other words, an unusually quiet afternoon in these parts. But far and away the most striking thing about the game is that it took place in a shanty-town that covered the entire 6x4 foot table. These little gems had been acquired from tinned-pears via Ebay.UK who produces them in 15mm/20mm/28mm and is also open to commissioned projects. He can also be found on Facebook at Tinned Fruit Buildings. I was completely blown away with the look and the fact that each and every one was a hand-crafted original. Simply Awesome! 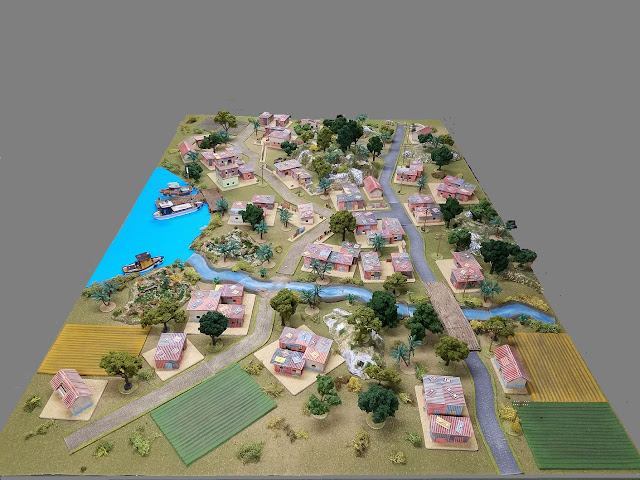 R.U.P. has more buildings but we needed to have room for a few minis! 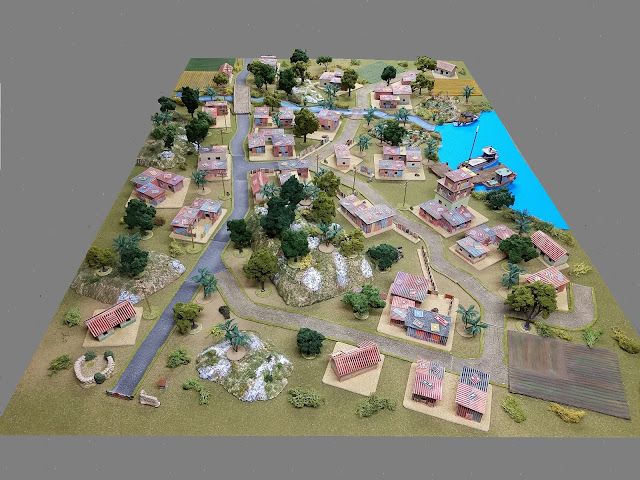 A view from the other end, just as stunning 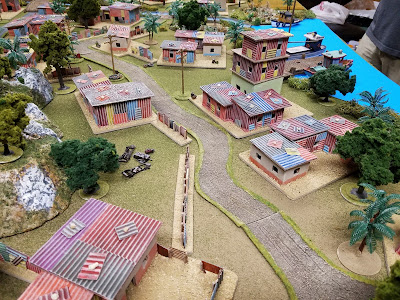 the mean streets down by the docks 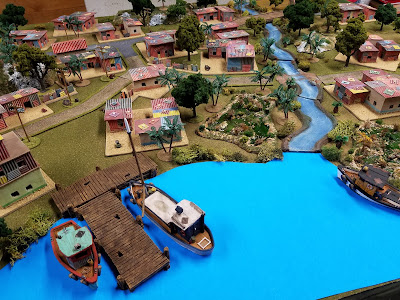 hardly a bustling waterfront, but then, civil war is usually bad for commerce

A Return to the Rampant Lion

Inspired by the fun we were having with Pikeman's Lament Joe and I decided to dig out Lion Rampant and my old 15mm Middle Ages troops and play a game. I have to admit that my first experiences with Lion Rampant left a bad taste in my mouth. As I have played more of Mersey's games I understand his design ideas a bit better and have come to terms with my old apprehensions.

True to form, instead of playing a game of twenty-four points a side we thought that we would give a sixty point battle a try. We did make two changes; we broke each force into three Battles, these groups diced as separate entities so that one bad die-roll didn't freeze the action all the way across the table, secondly we decided that each base represented two figures (ignoring the number of figures mounted on the base) this changed the look of the game a great deal. 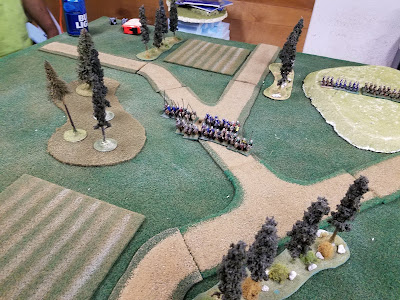 the right flank of Joe's army, a threatening mass of cavalry, four units of Mounted Sergeants 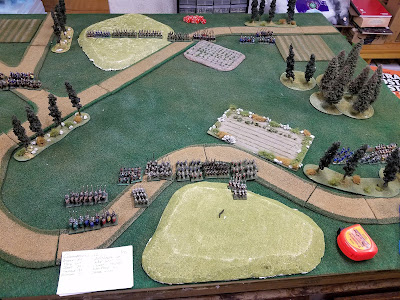 in the distance the rest of Joe's force; four units of Elite Archers flanked by a unit of Foot Sergeants, on his far left two units of Mounted Knights and another unit of Sergeants

Read more »
Posted by Anton Ryzbak at 4:30 AM No comments:

Once again I had an opportunity to play a quick game and my sole opponent was Joe, we quickly resolved on playing a round of Pikeman's Lament. I had a scenario in mind for a Napoleonic game but the it translated well to the 1690's so I laid it out on the table.

The situation is that a convoy of siege guns needs to be delivered to the besieging army, it is being escorted by a group of infantry with a nominal cavalry escort. Word of the convoy has been passed to the opposing side. They don't have the forces to lift the siege but there is a handy force of elite cavalry and brave infantry. With steely nerve and a dash of luck they just might be able to intercept the convoy and destroy the guns and disperse the crews. 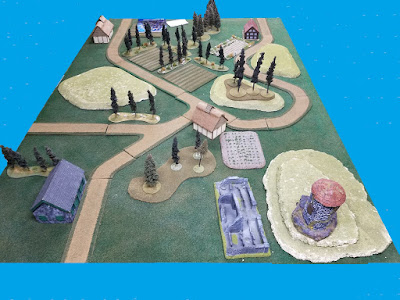 the place of battle, the convoy will arrive from the far end,
dicing to decide which road they are on