More ideas from my fevered brain:

1.   Forts
Every colony will start with a fort, it is capable of housing 24points of troops. The walls will support 12 figures fighting in each direction (subject to the points limitation). if a cannon or Gatling gun is mounted it displaces as many figures as it has crew plus one. If the field piece is mounted at a corner it displaces figures from both of the walls that make up the corner.
The model of the fort will be no larger than 12" square. In game terms it counts as hard cover (divide hits by two, rounded down) and higher ground.
We will discuss the price of forts, I want them to be relatively expensive to force the colonial forces to keep moving around to enforce the Sovereign's will.
I will build a standard fort, if you have a desire for a different design, and can draw it coherently, and it interests me, I will build a special one for you.

2. Supply Wagons
Supply wagons cost one point each, they will support 24 points worth of troops each week on campaign. Effectively a 24 point force will "consume" a wagon a week while on campaign. The supply column will be present on the table with every Imperial Power's force. Wagons can be destroyed by inflicting six hits on them either in melee or by shooting. Once a wagon has been consumed it is removed from the supply column. Loss of supply wagons will either foreshorten your campaign or lead to attrition among your troops.

3. Heavy Guns
As the game is designed the guns are small field pieces. Fortresses and siege trains may have need for heavier hardware. Heavy Guns cost 8 points each, shoot 48", have five crew figures and ignore two levels of cover.  They move 2" a turn without limbers, 4" with limbers. There are no heavy Gatling Guns, but I am open to discussion.

Old Sarge has been busy

Pop on over to Old Sarge's blog, besides being a much better painter and modeller than I am he has a series of posts linking to great rules ideas for The Men Who Would Be Kings and In Her Majesty's Service blogs. Food for thought as we work out the rules details for our campaign.
Posted by Anton Ryzbak at 8:26 PM 1 comment:

Some thoughts from Joe

Hey John,
I'm having trouble posting on the blog again, please post this as a reply to your latest topic for me!
thanks,
Joe

All,
RE: points above
High command on table: I was thinking a single figure 3 hit unit as per Dragon Rampant. Free, over and above 60 point total force. 4+ shooting (If allowed to shoot) and 4+ h2h.

The planned VSF campaign will require (but will not be limited to ) the following:

We are using The Men Who Would Be Kings rules from Osprey, you will need a copy, either a PDF printout or a bound copy, hard copy preferred!

An Army List of 60 points under the rules, this will be the ENTIRE land forces of your colony so choose wisely.

Some practical thoughts on Higher Command appearing on the table.

Some thoughtful ideas on how to handle steam-powered vehicles including AFVs.

A list of the three most important things you want out of a campaign game.

Tom's Halloween Party is this weekend, it looks like we will be meeting next on 5NOV16 1900hrs.

oh, and wee need a name for the mythical continent, my vote is Neulandia. 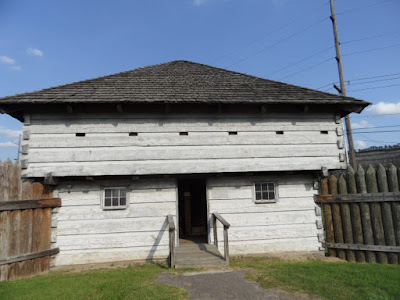 Located oddly enough in Stuebenville Ohio, this on-site reconstruction represents one of the first new forts built by the fledgling United States (technically they were the Confederated States as the Constitution had not yet been written and ratified Actually, true believers, Article 1 of the Articles of Confederation is them declaring that their confederacy would be known as the 'United States of America'. It's a single sentence long. Also, I now feel like Stan Lee... - Justly Rulin' JnR). Named after the Baron Von Stueben of Revolutionary War fame this fort was constructed in 1786 to protect surveyors who had been contracted to begin the platting of "ranges" (a.k.a. townships) along the Ohio river. The presence of the troops also enforced the claim to the lands west of the mountains that had formerly belonged to Great Britain and helped enforce the treaties with the Native American tribes in the area. The fact that the 150 soldiers present there represented one-fifth of the total armed forces of the nation showed how seriously the government considered the work being done.

The original fort was built in just over a month by the 150 soldiers assigned to defend it, it was reconstructed in fits and starts over a much longer period of time. There was suggestions of building a reconstruction on the centennial of its founding and then, after repeated archaeological digs on the site,and some very dedicated fund-raising by local enthusiasts, work was begun on the current reconstruction in 1989. This project continued for ten years with alternating bouts of construction and fundraising until the project was finished. The fort has a very informative and well presented Visitor Center staffed by knowledgeable and enthusiastic volunteers. If you are in eastern Ohio, western Pennsylvania or the northern tip of West Virginia take the time to drop by it is well worth a visit!

The ever creative and relentlessly jingoistic ( or would that be Gingoistic ? ) Housemartin has laid claim to the Mexican Empire as his nation in our Alt-History/VSF campaign. To bolster and buttress his claims to a place in the sun on the newly discovered continent he has issued the following missive. A literary masterpiece soon to be required reading worldwide! I encourage everyone intending to participate to construct a similar time-line (it does not need to be a complete - or bombastic- as this beauty) to announce to the world their backstory and plans.

It is a delightful example of thinking outside the box, about how a few minor changes to a timeline could have changed the face of the world we know. No need for time-travelling AK-47 merchants (side-eye at H. Turtledove) just a few different decisions and a different bit of luck.

The Mexanish Empire’s History of Magnificence.

The ascension of Emperor Maxmillian I on 10 July, 1863 was the brightest day in Mexico’s brief, but glorious history. Since his ascension, His Most Catholic Majesty, Maximillian I, has presided over a rapid and impressive rise in both Mexican power and prestige on the world stage. At his ascension the Emperor faced the warmongering ways of the Yankee Imperialist Lincoln with manly resolution. Avoiding both direct involvement in the American Civil War, but also maintaining his right to the throne of Mexico. When the Southerners successfully defeated Lincoln in their Civil War, with significant material assistance from the Sovereign of Mexico, any attempts at Yankee meddling in Mexico were ended.

After several successful games of The Men Who Would Be Kings and a serious-minded discussion with some of my gaming compadres (and an even longer serious discussion with myself) I have decided to float the idea of starting a new VSF campaign. Drawing deeply on the seven years of experience that the Daftrica campaign provided will correct the flaws that became apparent as time went by.

All are invited to the discussion of what they are looking for but I am the final arbiter of the campaign. I will set forth the rules and modifications to be used, I will establish the entry level commitment for players (be ready to paint your army if you don't already have one available) and the time-lines that will drive the campaign. If you aren't serious, have issues with completing paperwork in a timely manner or want to sponge armies off other players please do not apply. There will always be plenty of slots in the OPFOR side of things for people that only want to show up and push lead.

Baseline requirements are:
1. Have a copy of the rules, The Men Who Would Be Kings, no excuses, none, don't ask. Osprey rules are cheap and widely available, and these are dead-easy to understand.
2. Have an email that is checked regularly, that means daily, preferable twice a day.
3. An army totaling 40 points under the rules, these must be composed of PAINTED  period-specific figures from 1850-1900. No recycled WW2 Japanese or such. Certain exceptions will be tolerated but you must come to me on bended knee to ask permission.
4. The ability to undertake the rudimentary math required by the rules.
5. A true sense of the Victorian and a jovial sense of humor, a strong sense of the power of the Pun is welcomed as well.

Further, probably more irrational requirements will be imposed by me on a whim, proper pith-helmets (or other period appropriate headgear) is a possibility.