I happened across these at Michigan Toy Soldier today. I don't know if they are new, but they are new to me so here they are. A series of 28mm Dark/Middle ages buildings that will happily stretch into the early modern era without too much effort. They are solidly cast in a medium gray plastic and nicely detailed, they will be a breeze to assemble. Priced at $8.00US they are very affordable and should paint up easily with the deeply incised details. Sorry about the cello-wrap in the pictures, but I have seventy or so 28mm buildings so I passed on buying these and snapped photos at the store. They have that "just right" feel, large enough to match well with the miniatures but small enough that they don't dominate the landscape. I would consider these an excellent purchase. 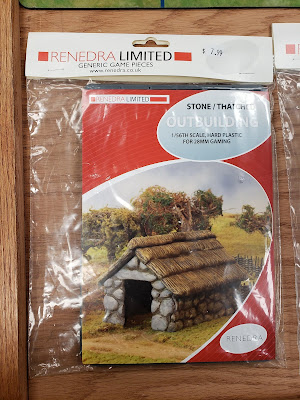 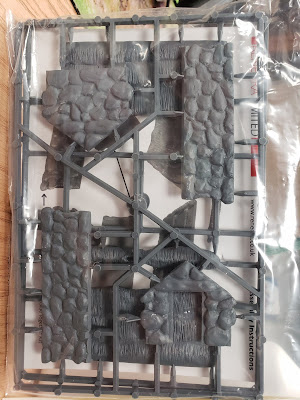 The Joy of Styrene 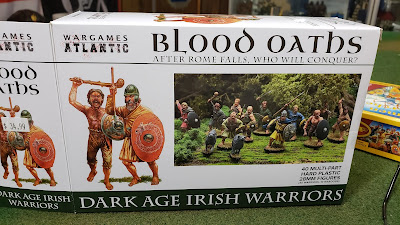 So, I'm back at my Irish Dark Ages figures intending to finish off the first box as lightly-armed skirmishers and I will dedicate the next box to some close-ranked spearmen that can double as Welsh in a pinch. Before I even started I got the itch, that certain itch I suffer from whenever I'm dealing with plastic figures; the modification itch! I just knew that I couldn't build these as "out of the box" figures; they would need some cutting-up and new bits. For starters I wanted to add some archers to the mix, no, none of those deadly longbows from a few centuries later; just some run of the mill lads with bows. To this end I dug out one of the boxes of "donor bits" that I had placed aside when I had built some minis a few years back, the Gripping Beast Arab Light Cavalry box. I had built these as a largely spear-armed unit so there were plenty of spare arms holding bows still available.

So I managed to get the canons put together, building this with MDF is always an interesting trick and the more fiddly the item, the more I think people should not make the item out of mdf, but people keep making them and I keep ending up with them so here are the canon builds. 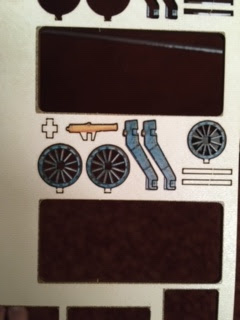 Time for a look back at what I have accomplished (or failed to accomplish!) in the last three months. As the world began to open up I spent a less time in the workshop and thus my total number of postings fell to fifty-two posts from the previous high of seventy-six. This was accompanied by a reduction in page visits to 26, 028 for a daily average of 289. I gained two followers.

As far as the content of the posts go I did one book review, three figure-set reviews and completed six after-action reports. During this period I completed three model aircraft which were covered by corresponding posts. I did a step-by-step photo tutorial on how I rigged my 1/350th scale galleons. For once in a very long while I resisted the urge to produce a large terrain project and confined my creative energies to scratchbuilding ships and converting figures. At the request of The Housemartin I scratchbuilt a 1/200th scale Dauntless class light cruiser and two A Class destroyers for his Operation Ironclad campaign. I undertook to convert six Dark Ages Irish into 18th century Scots just because I love converting plastic figures. Following along in that vein I built thirty Great War German Infantry, most of which were subject to conversion/customization, some of it rather radical, as well as building a Wex Flammenwurfer and T-Gewehr to equip them with. To provide them with an opponent I scratchbuilt a 1/56th scale MK IV British tank. Stepping down a size I painted a 15mm Stargrunt Neu Swabian League force consisting of eleven vehicles and one hundred infantry.

Realizing the dual facts that I won't live forever and that my interests have shifted radically I sorted through The Vault and identified a large number of plastic model kits that I simply won't ever build. I placed a few of these on a tab entitled "Better Than Ebay" and will add to that as time goes by. I had to admit to myself that if I've been hauling this stuff around since 1979 without getting any appreciable amount of them built I'm not likely to find myself suddenly shifting focus and going back to finescale modelling.

Enough of that for now, back to the workshop!

And now for something COMPLETELY Different ... The Jacobite Rebellion of 1745!

So periodically, A certain website where people go to buy and sell all manner of things awards free money to spend on their website (quarterly).  I used my free money this time two buy two things.  A funky chain saw and this. 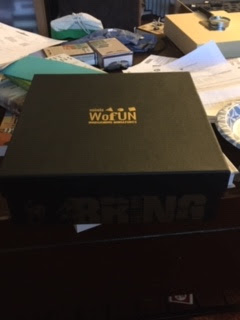 The name of the manufacturer is WoFun games.  They are from Romania and sold in the U.S. by a company called Ravens Banner Games out of Texas.  They have a range of periods besides the 45 including Texas War for Independence, Ancients for Romans, Carthaginians, Greeks, Macedonians and Persians including early and late, The sets are made in either 18mm or 28mm.  Perter Dennis is the artists behind these and Andy Callan writes most of the rule sets.  These are the same system that Peter Dennis tried a few years back with papers figures and rules in a book format.  Apparently those paper figures did not "take flight" so now they are trying the same figures in a different format - painted Plexiglass!

Sometimes it takes just one figure 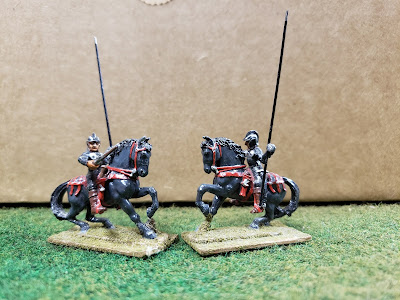 I have probably forty-five different armies in various scales and periods. Some I built as part of a group project, others because I was interested in a specific period. Occasionally I have built entire armies because of one sculpt. Many ages ago I spotted a pack of Pal Partha Renaissance figures hanging on the rack in a local hobby store, what really caught my eye was the magnificently sculpted horse in the little clear plastic bubble-pack. It looked like something Michelangelo might have sculpted himself.  Like all Ral Partha products is was beautifully sculpted and perfectly cast. Sadly it appears that this line is no longer in production (other Ral Partha product lines still are). I took my pack home and painted it, then I bought another, and another until I found myself in possession of an entire Swiss army. This has happened several times since, but the Swiss were the first. 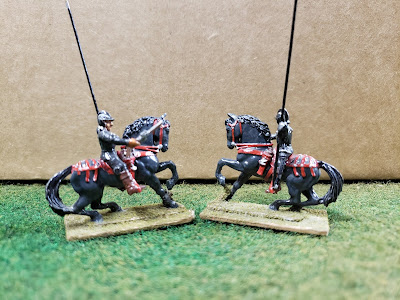 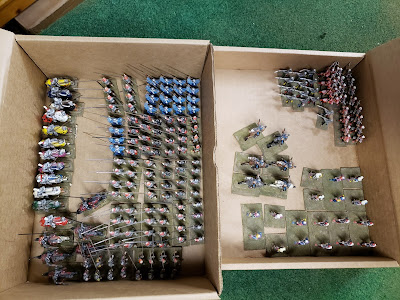 the infantry are just as well sculpted 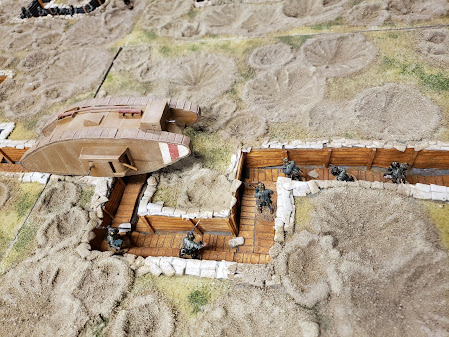 Trunkmonkey and R.U.P. were kind enough to donate their Saturday night to testing and critiquing my beta version of the Great War Tank hunter rules. We played two games, both ending in victory for the Germans and identified several areas of the rules that needed development/clarification. Unfortunately I was so busy sorting through my scribbled notes (i.e. the beta version of the rules) that I forgot to take any pictures. Thanks to R.U.P. for keeping a cooler head and snapping a few frames.

Thursday will see a land action in my 30 Years War Imaginations campaign,

Saturday's event is still to be determined

Posted by Anton Ryzbak at 10:43 AM No comments: 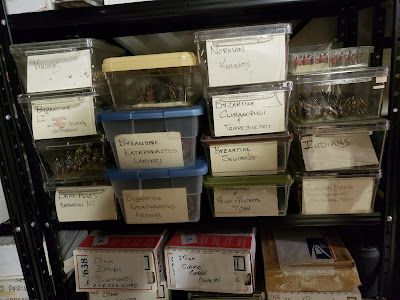 they accumulated slowly, as I painted the figures

The other night as I was looking for a place to tuck my newly-painted German Great War Infantry into my Toy Room I stood looking at one of the many shelves packed with boxes of minis. They were packed away in their storage boxes; plastic shoe boxes mostly, that I had bought as need occurred. As I contemplated trying to wedge another box onto the already crowded shelf it occurred to me that the plastic shoe boxes were wasting a lot of valuable space, I mean a LOT of space. 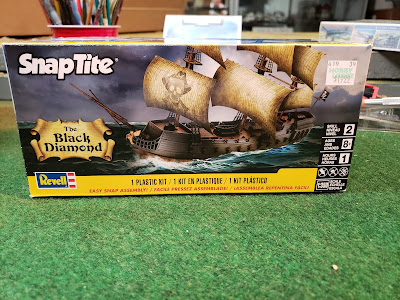 I happened to be strolling through Hobby Lobby when I spotted a bright pink sign exclaiming "40% all Boxed Kits!". Intrigued I took a look and quickly spotted two Pirate Ships from Revell, a closed glance caused me to see that they were labelled as being 1/350th scale. I am always looking to enlarge my 1/350th fleets and thought that these would be a nice addition, and the thought that they were nearly half off caused me to buy both of the models available in the store.

Read more »
Posted by Anton Ryzbak at 6:16 PM No comments:

A One Night Stand With Babs UPDATED

Having completed the WW1 German tank hunters I didn't much feel like painting any minis for a little while and, lacking the need for additional terrain, I was at a loss for something to turn my hand to. Without a wargaming project I decided to take a pass at Mount Plastic; an entirely unscientific method brought me to choose an LS model of the KI-15 "Babs" that was sitting on the top of the "Spats" pile. 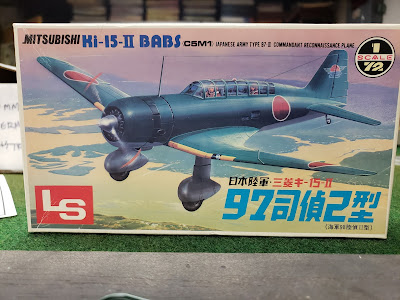 We will be gaming this Saturday, 26SEP20 at 7pm

Be there, or be reviled behind your back!

Posted by Anton Ryzbak at 1:31 AM No comments: