Mars Attacks (Duluth?); An All Quiet on the Martian Front game

The Housemartin is a huge fan of the All Quiet on the Martain Front rules. I have to confess that I like the rules as well and find the models beautiful. I had built a rough fortification at Housemartin's request as he desired to try out the fortification rules.

The design of the fort was based on the idea that the Martians have no naval presence to speak of  and thus the guns and turrets from warships can profitably be used to defend important points inland. The fort is an elongated hexagon with a twin-gun light cruiser turret on each corner. in the center  are a pair of towers; one equipped with range-finders and huge fans (to dispel the Martian toxic gasses), the other has a gun that shoots a thick mastic substance (think Liquid Nails) to cripple anything entering the surrounding earthwork.

The Martians had several Assault Tripods, a heavy Howitzer Tripod, a couple of lighter Scout Tripods and a Slaver running as bevy of drones(?). 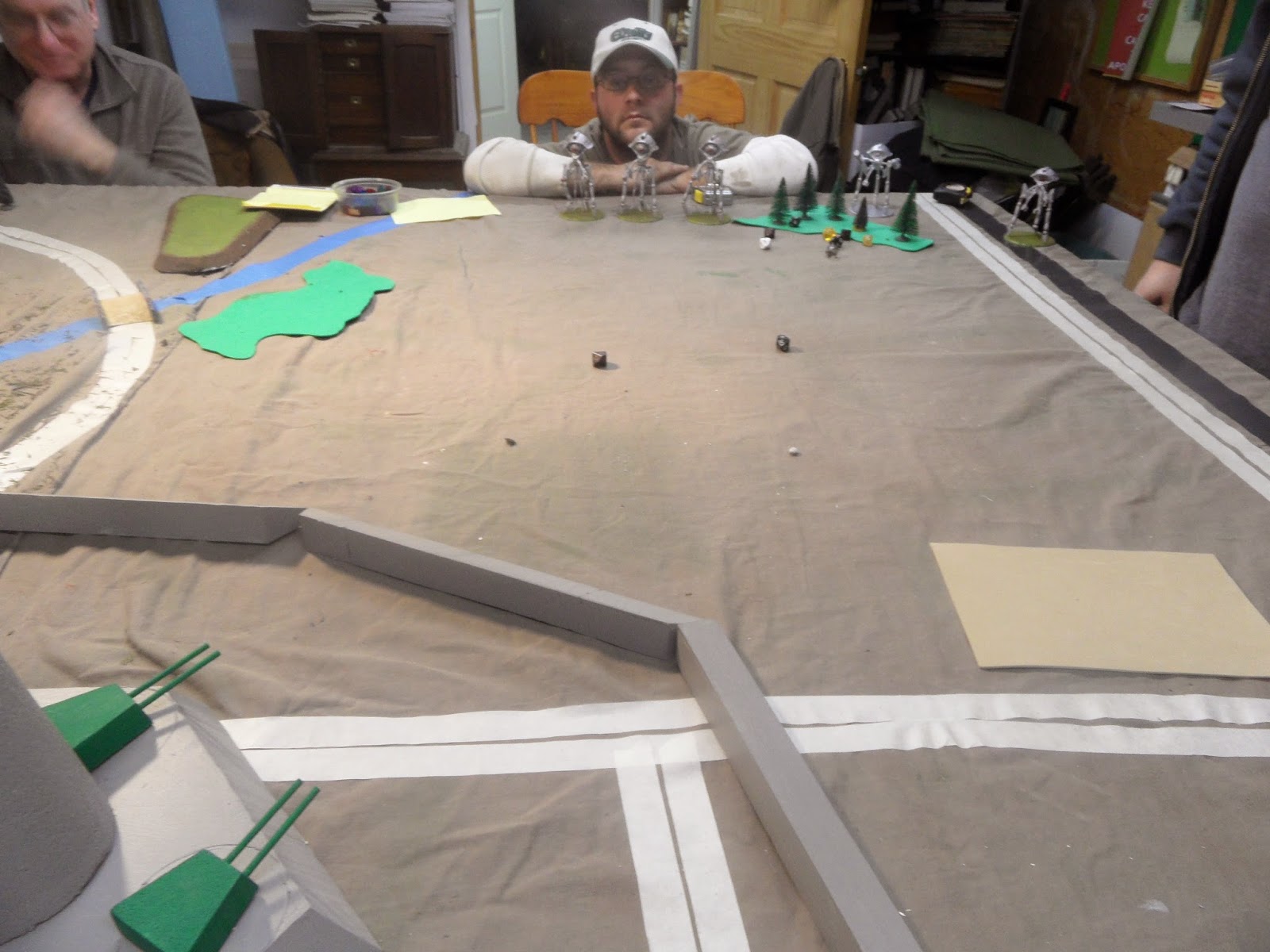 at the beginning of the game the 'Pods come into view

Joe dropped by last Saturday and we ran a game of Battlegroup Kursk. The rules use an interesting activation/command system that is interleaved with the morale function. At first glance the tank by tank activation would seem to play slowly but, with only a limited number on command points to employ (often some units do not get to move every turn) and generous movement allowances, thing banged along at a snapping pace. 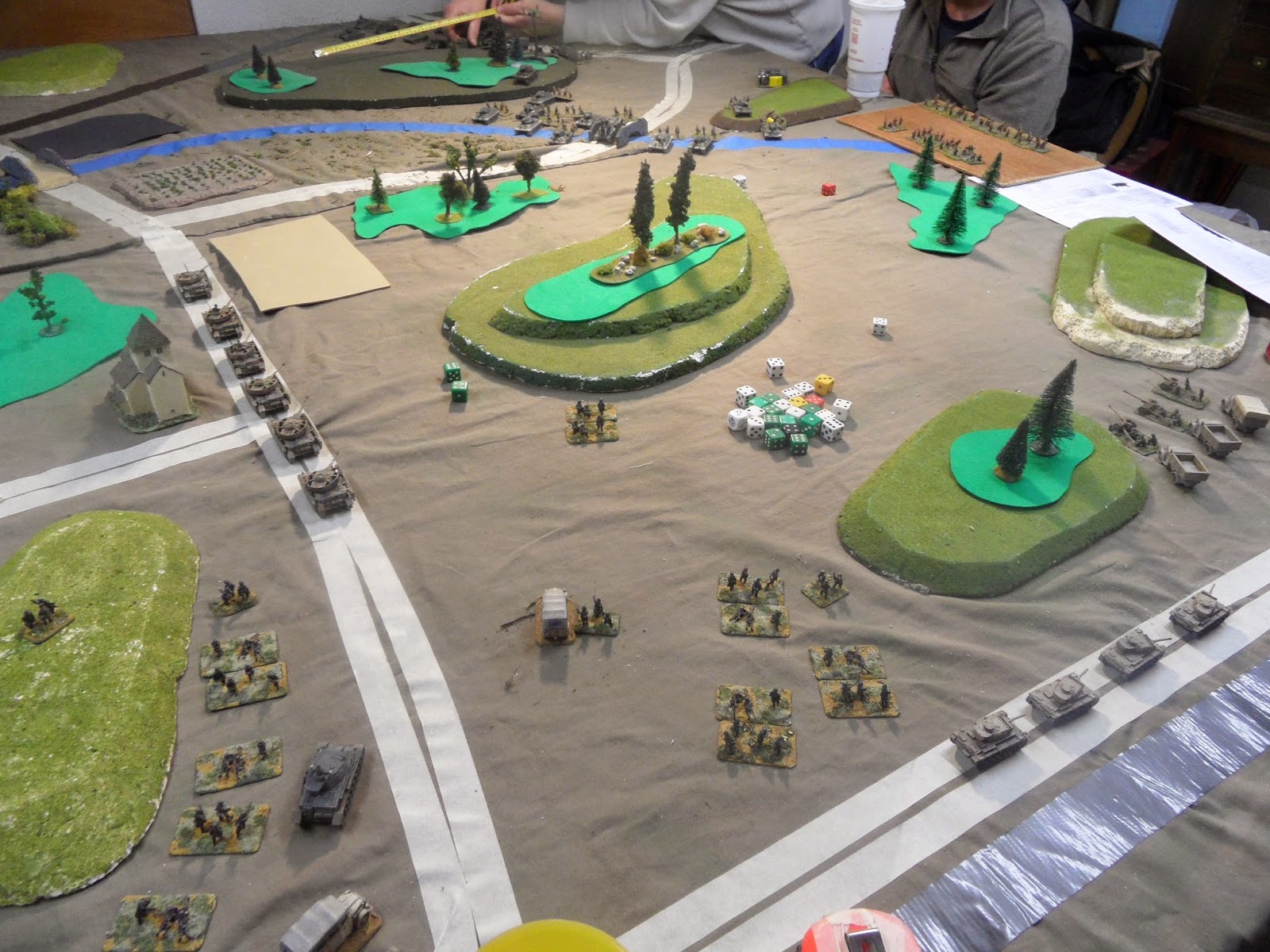 the situation on turn two, Germans trying to move on both flanks
to force the Russians to give up some flanks shots

Further progress on the SMS Blitz

I had a little free time so I finished up the major components and started to paint them. This time I remembered to leave them separate from the hull until I was finished painting them, it certainly makes life easier! 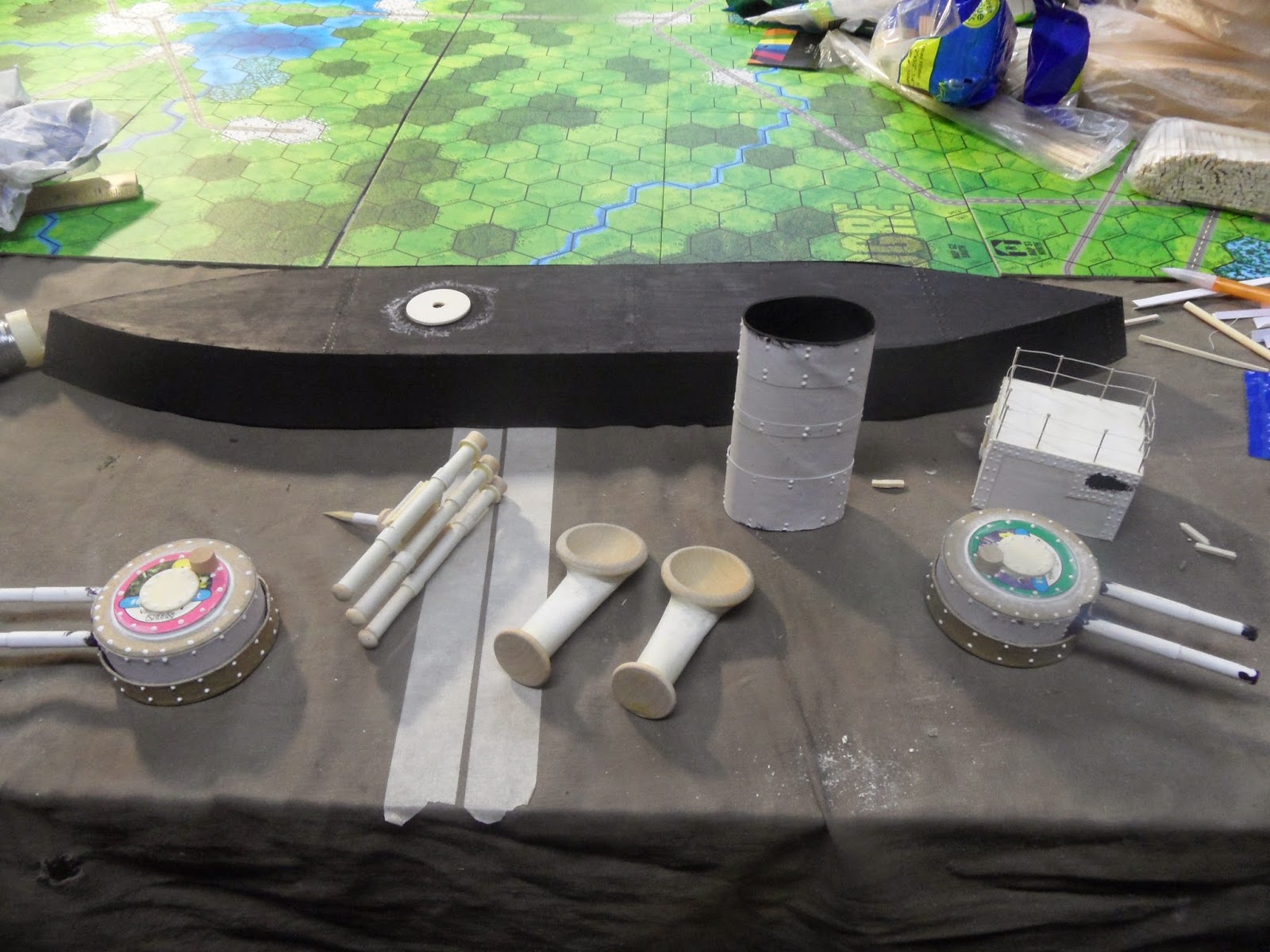 the hull got a preliminary coat of black 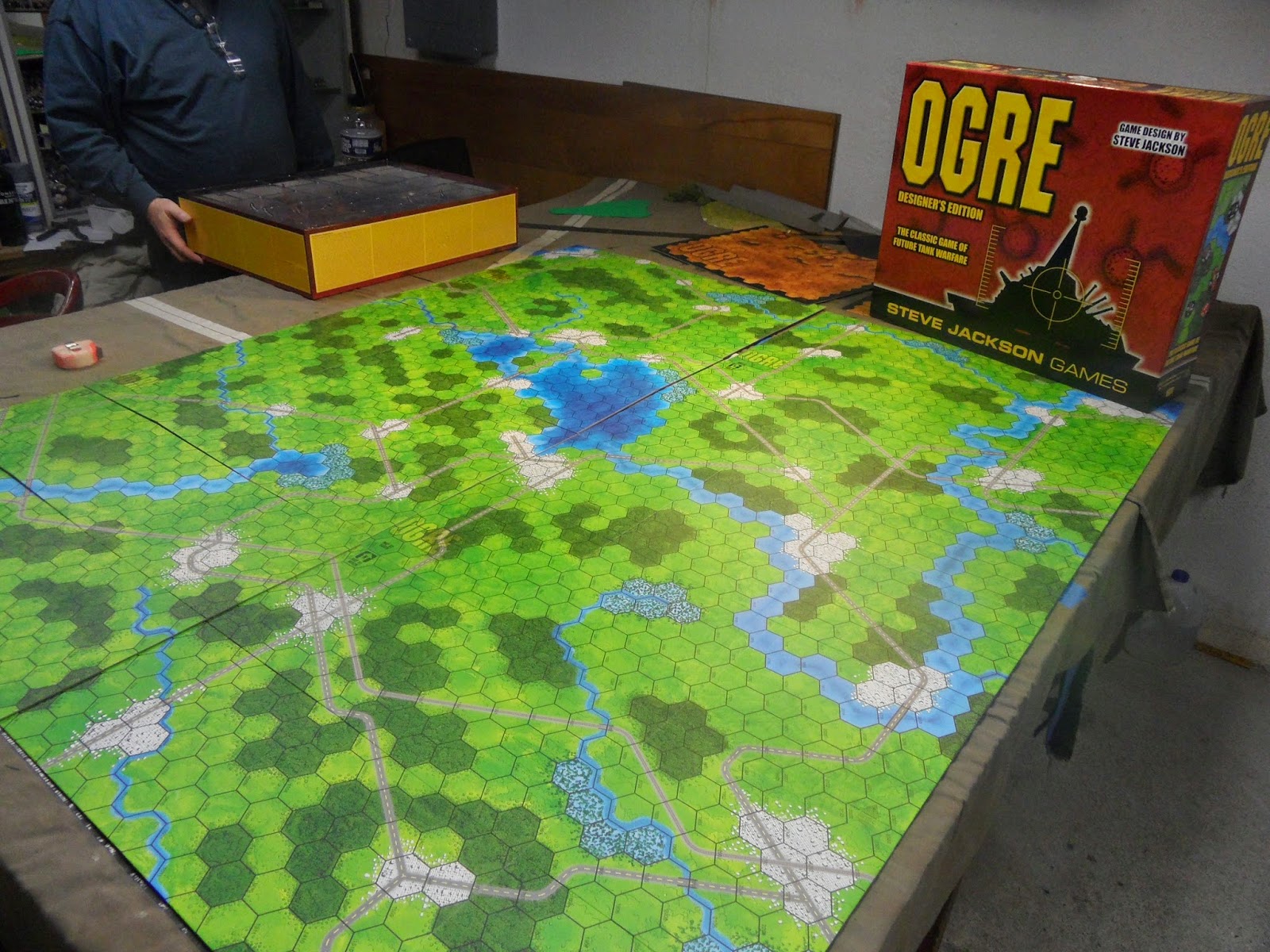 We finally opened our copy of Steve Jackson's magnum opus version of Ogre. I have to say this is perhaps the finest boardgame that I have ever dealt with in all the forty years that I have been wargaming, the quality of the components is simple astounding. We spent a couple of hours punching out and assembling the 3-D models and sorting through the counter. Next week we will play the egame. It has been years since I played the old pocket version, my college buddies and I played until the counters, and the map, simple fell apart, I can scarcely wait!

This is getting to be a habit!

So I was sitting around (trapped indoors due to the extreme weather event we are currently enjoying here in Michigan) trying to work out the dimensions of Fort Mantanzas in 1/60 scale when the boat building bug bit me again! I resolved to construct something simpler than the challenging Dupuy so I stuck with a sleek little light cruiser. I got out the Proxxon hot wire cutter and shaped a narrow, slightly tumble-home hull then sat and looked at it for a bit, mulling options over in my head. It would need to be German to bring the forces back into balance but from there I was just winging it (as always!).. 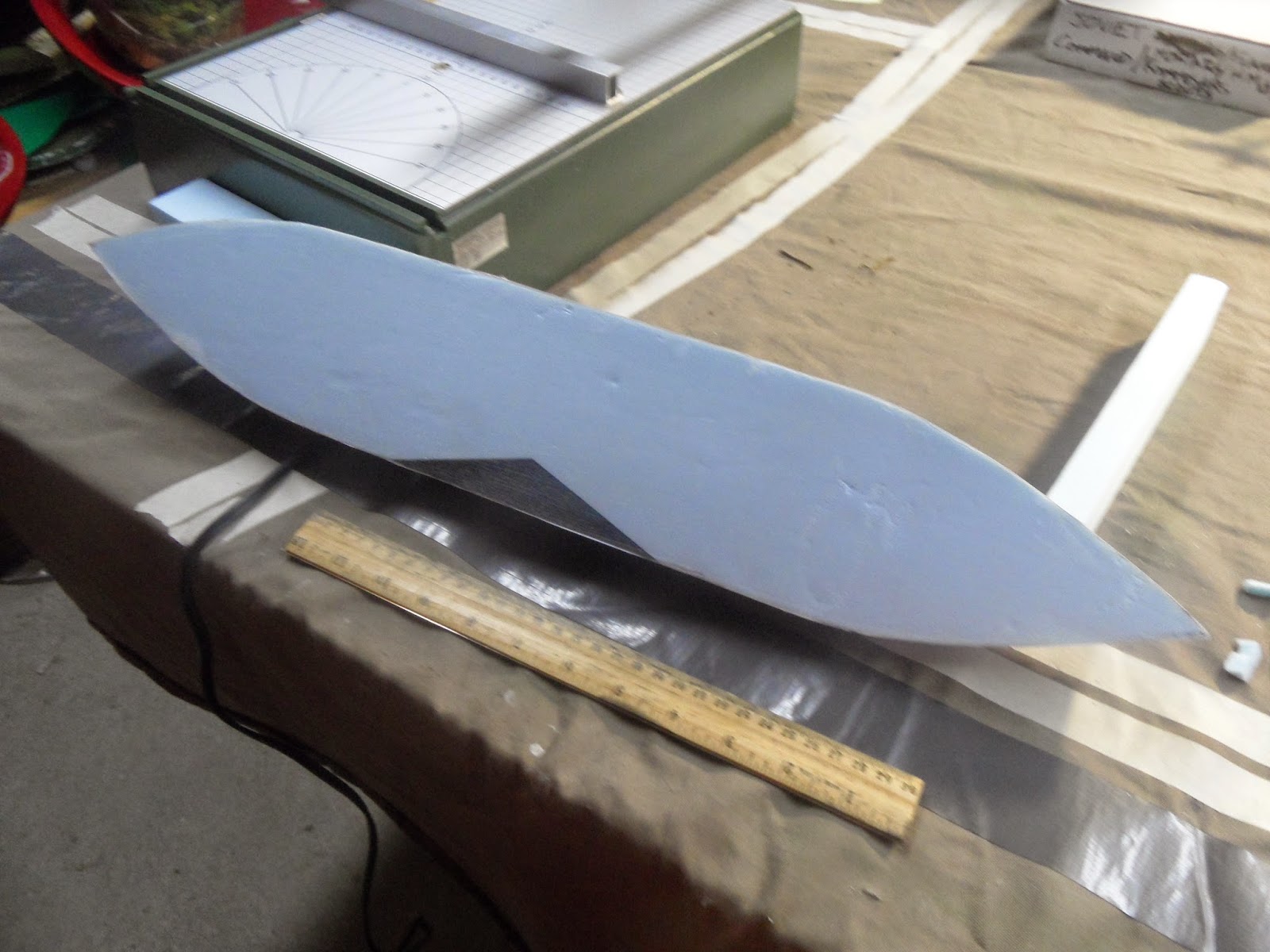 razor sharp and narrow, she will be fast

I recently discovered a new 3D paint that looked like it might just replace my old rivet=making standby. I decided to put them to a head to head test; 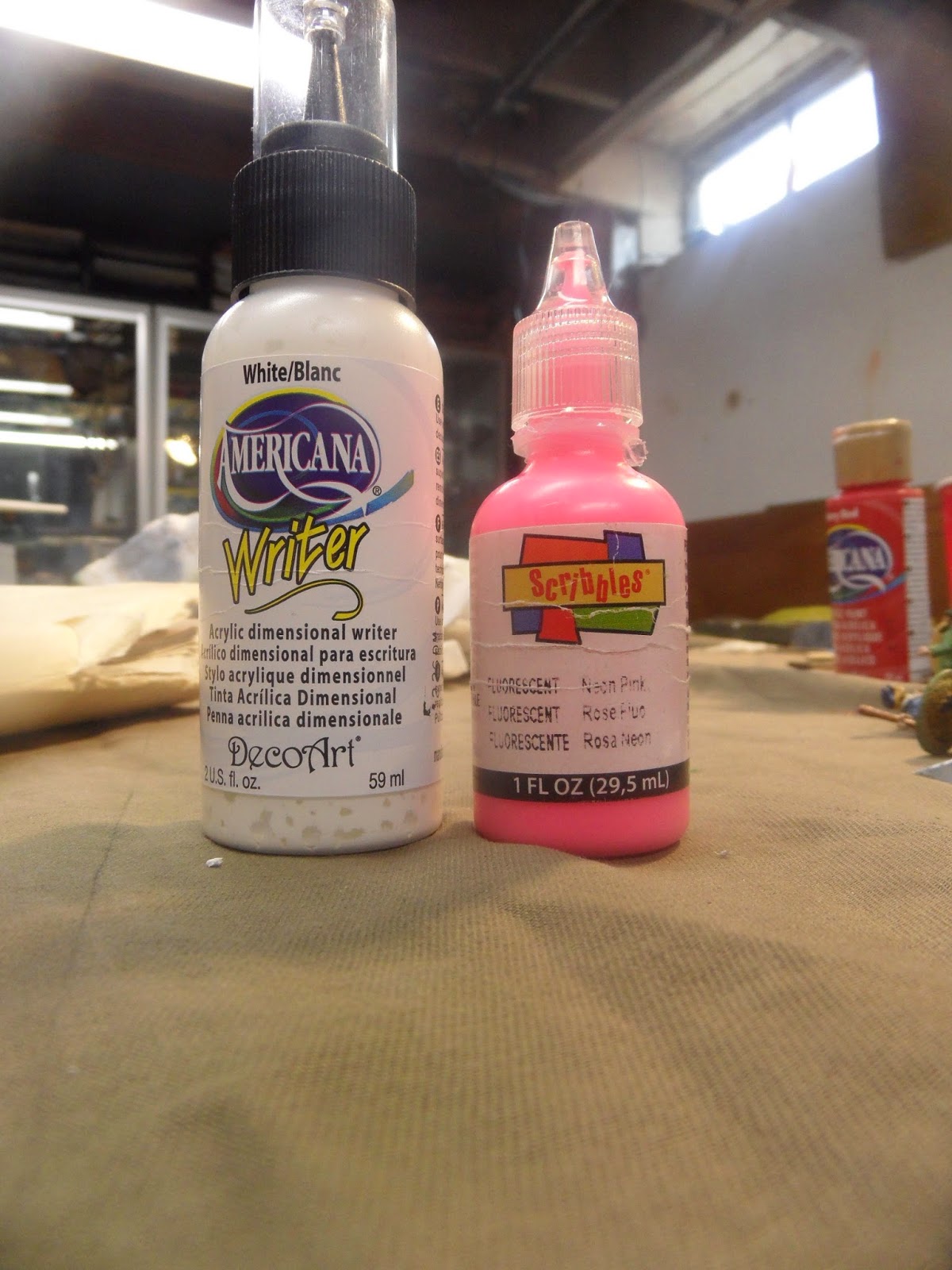 the contenders, Americana Writer (the new guy) and Scribbles (the champ)

Below you will find a photo of the test, the grid is 1/4" lines and I tried making rivets as small as possible on up to a size that seemed larger than any I would find a use for. 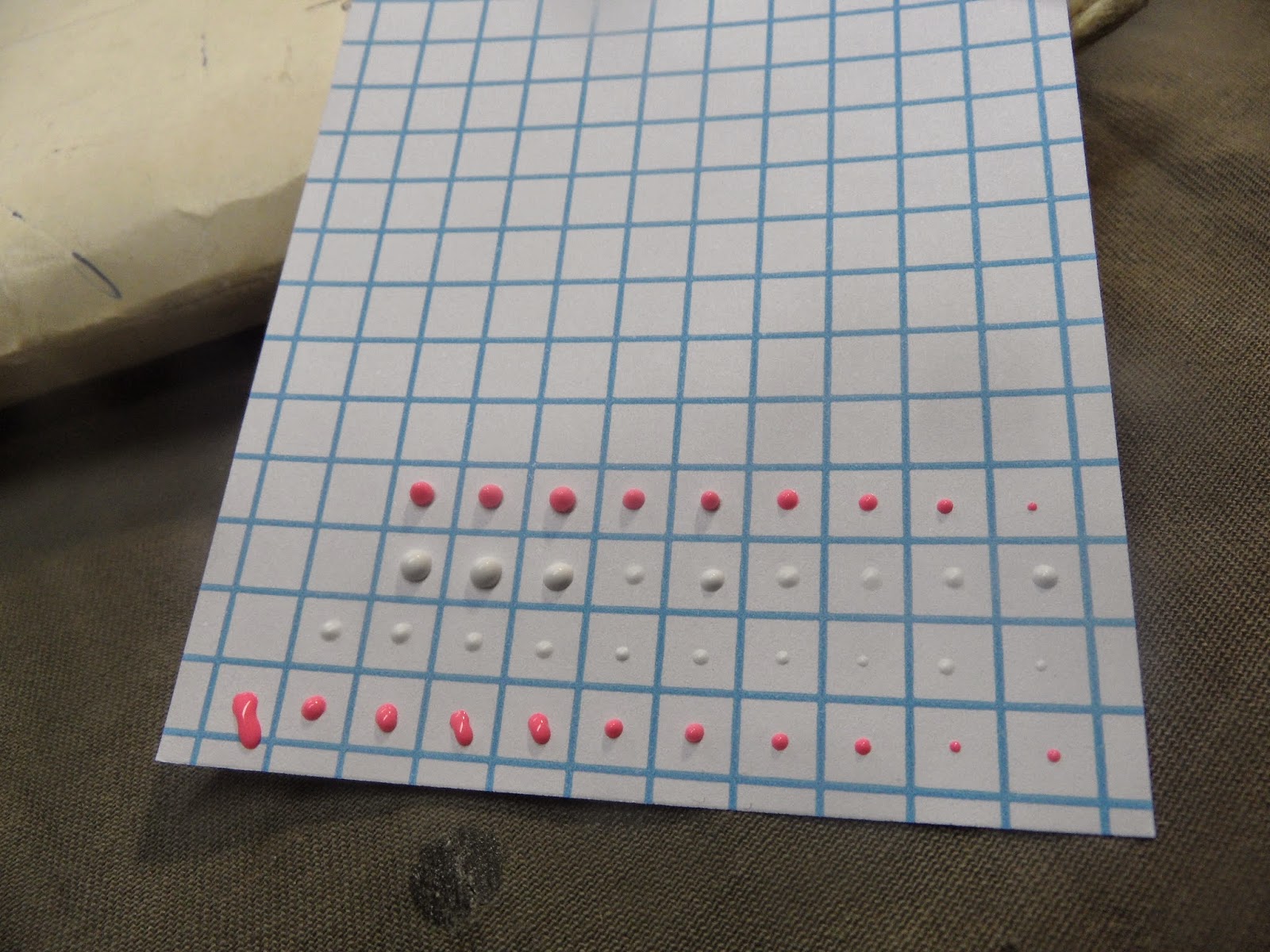 To my mind there is little to choose between them at the smaller end of the spectrum, but as you get larger, the Americana Writer provides a rounder, more symmetrical rivet that is less likely to run or drip. The fact that it is white will also greatly ease the painting situation as well. I was impressed by the way it help up when the Scribbles ran. 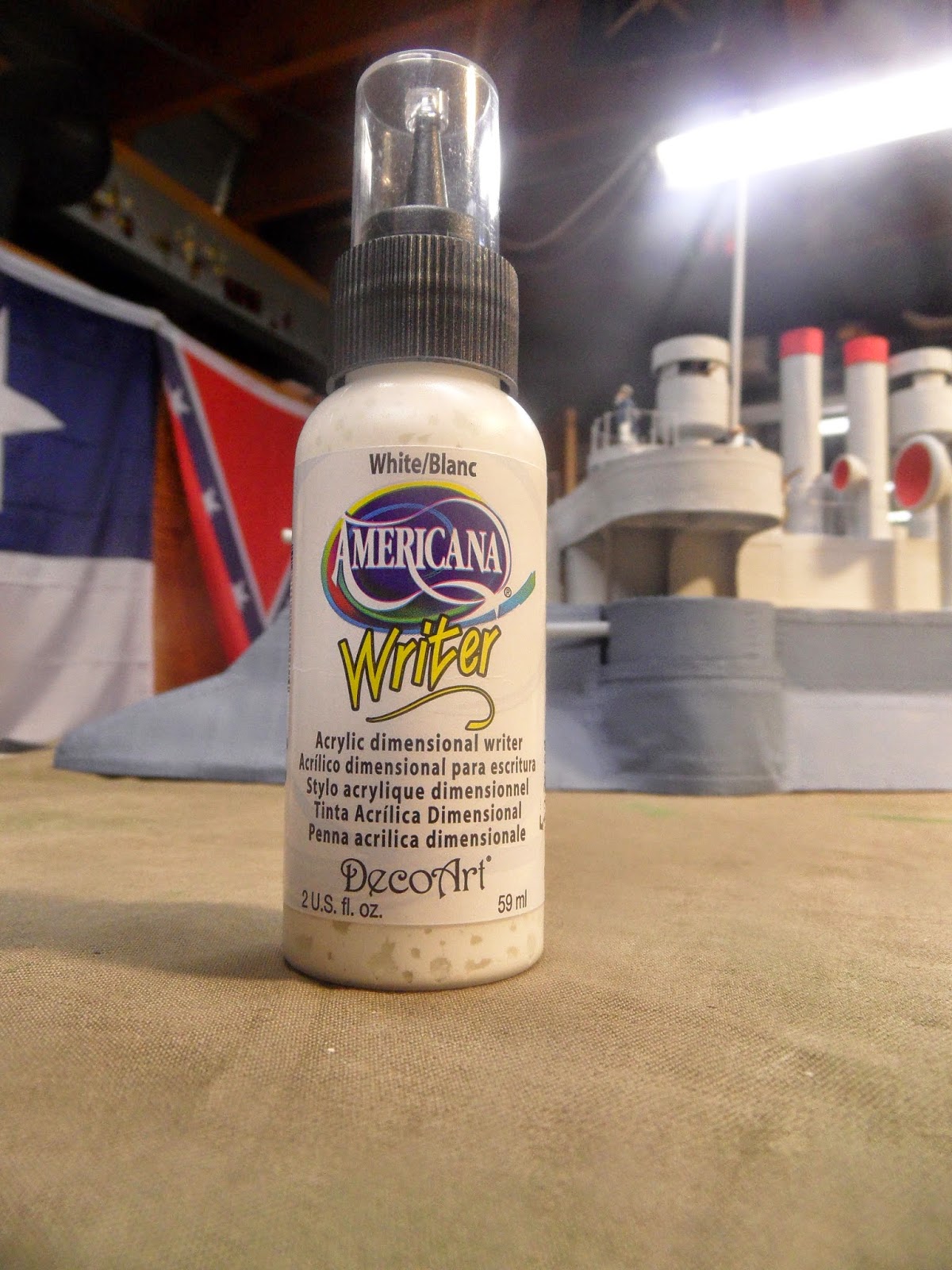 the new champ
I will probably keep both paints in my arsenal, but for now, the Americana will be what I reach for first.


Posted by Anton Ryzbak at 5:55 PM No comments:

One of the biggest compromises that one encounters in making models for wargaming is the significant difference between the scale (or size) of the model and the ground scale. This is rarely more evident than in naval gaming. You can wave you hand over a group of a dozen or so figures and declare them a battalion of six hundred men without raising too many eyebrows, but you can hardly wave you hand over a model ship and declare it a squadron. You pretty much end up having to represent the individual vessels for historic encounters.
Even in games that have no historical precedent players would be reluctant to accept a single model as their cruiser squadron. The history of naval conflict is laden with stories of heroic individual ships, players want that level of granularity.
Confronted with this issue and desiring to build ships in 28mm (yes, I know I am more than slightly mad) I had to make concessions in the dimensions of the model itself. Using the idea out forth by the great Col. Tremorden Rederring's website I compressed the size of the vesssel, essentially making them caricatures  of the real vessel.
My latest effort, the Dupuy de Lome, was actually a far more graceful ship than my model, I had to leave out a a vast part of the hull to make a model that I could store and transport with a reasonable amount of effort.  Below you find a drawing of the actual vessel. You will instantly see that I have left between one half to three fifths of the center part of the vessel out of my model, including the oddly mounted center battery of heavy guns. My model would be more rightly called "inspired by the Dupuy de Lome".

I tried to include the characteristic features, the triple turrets at each end, the flying bridges, the heavy military masts and the huge ventilators that made the Dupuy de Lome stand out but I had to remove a vast section of hull,. A model over six feet long simply wouldn't work! Below you find a side picture of my model. Scale modelers would be tearing their hair out at the sight of it, but I am building for the rough and tumble world of wargaming and am more than willing to accept the compromises. 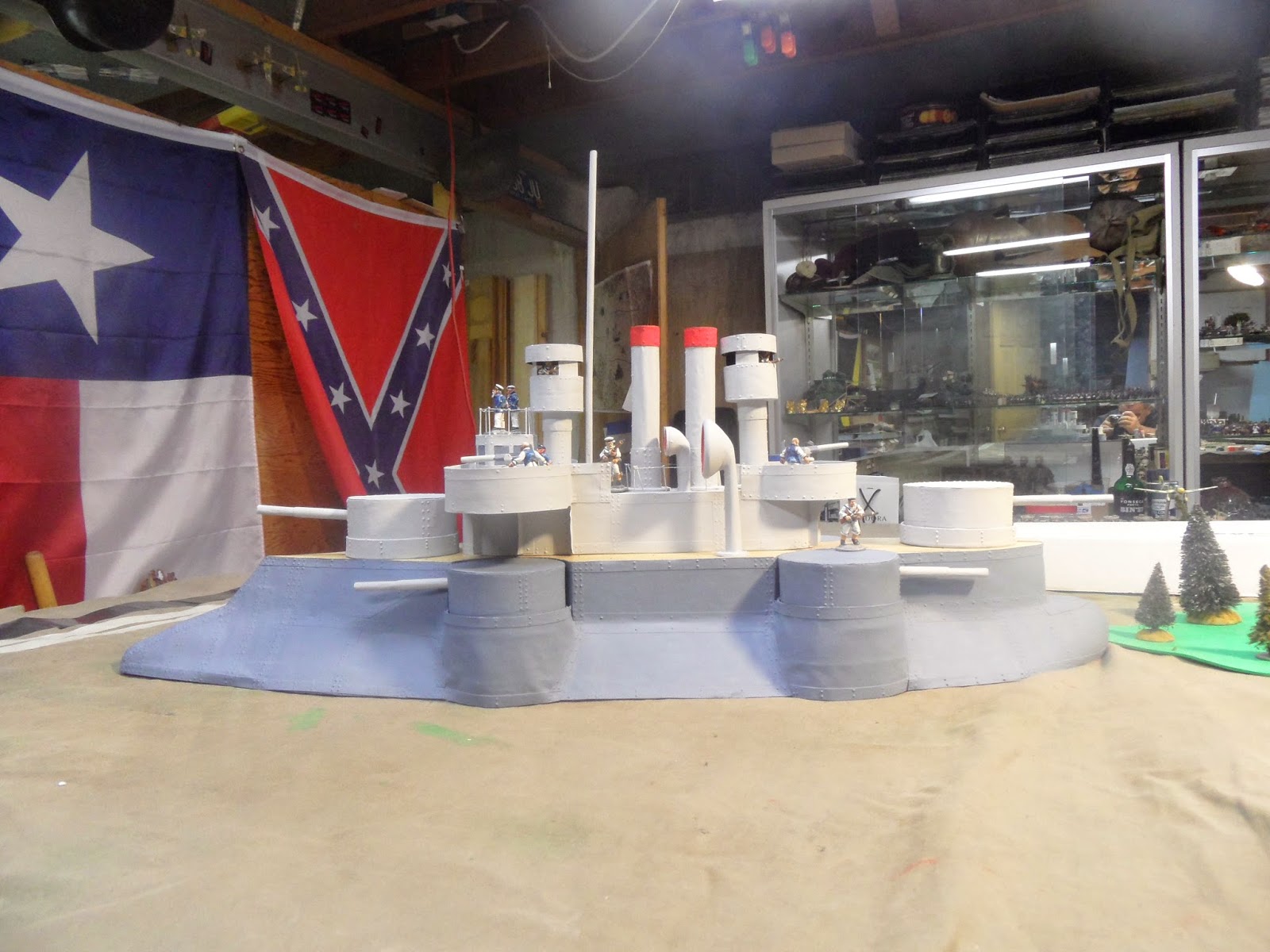 a well done 1/700 scale model,
beautifully detailed but far too fragile to game with,
and the figures are WAY too small to paint well!

Next, some light cruisers! I also intend to re-write my rules and publish them here (I know that I have threatened to do that before).

Well, I finally got the turrets finished and threw a coat of paint on the model. I still need to buils the lifeboats and boat-handling equipment, but she is pretty close to done! (At last!) 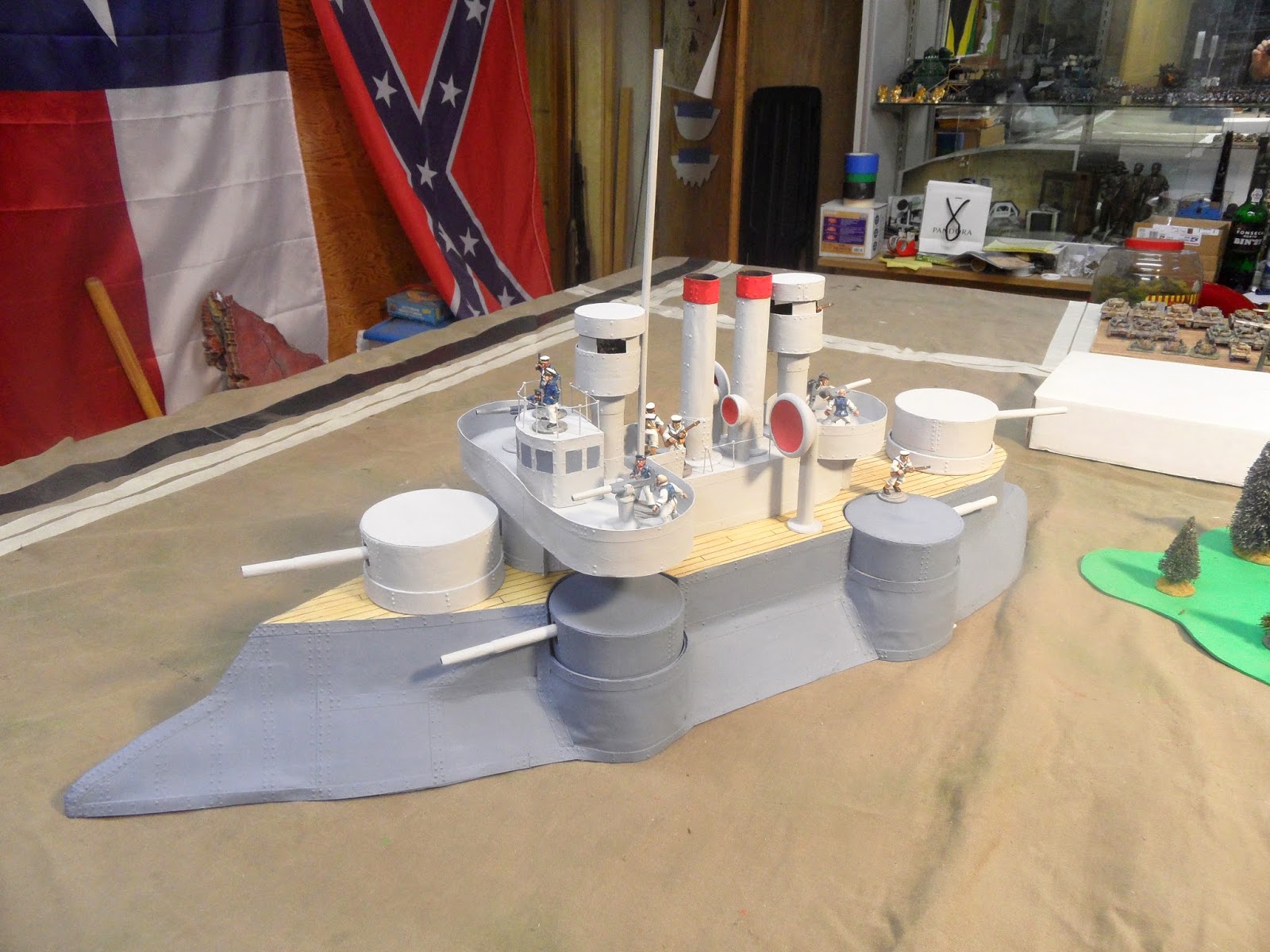 the crew seems happy
Read more »
Posted by Anton Ryzbak at 11:40 AM 6 comments:

So I took a long afternoon and spent it applying rivets to the models. Not a lot to say it was just dot-dot-dot until it looked right. 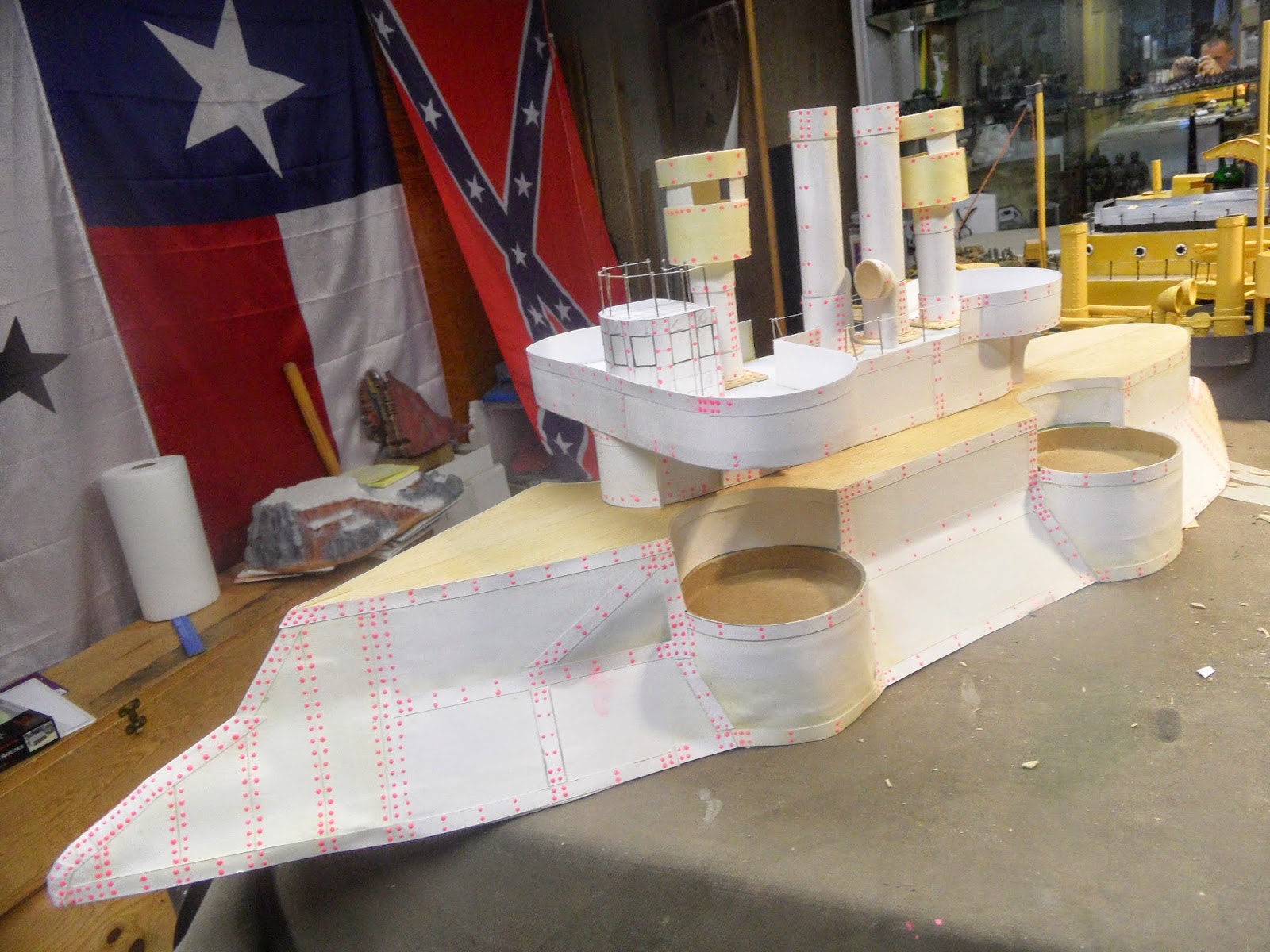 it turned out to a pretty big model