The other weekend I finally convinced my wargames buddies to try a hand at Axis And Allies WW1. The game, as one would expect from this series, has excellent components and clearly written rules. The map took some getting used to but we settled right in after the first turn or so. The game mechanic where you can co-exist with enemy units in the same space really changed the feel and play of the game and gave a satisfyingly different pattern of game-play. As in reality the race is for the Central Powers to find a road to victory before the Americans decide to toss their hat in the ring and put and end to the nonsense in Europe. It is very easy for them to get over-extended in the East and find it difficult to return victorious troops to the West in time to exploit the success.

All in all we agreed that the game played fast and well and gave a very effective reflection of the strategic problems faced by both sides.

Recommended to any Great War fan 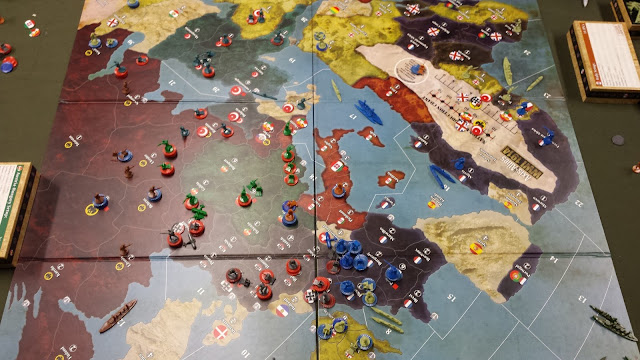 An intersting source of information on the War That Never Was

In one of my aimless ramblings around the interwebs I stumbled across a treasure trove this blog.

It seems to have everything related to The Cold War that one could desire. Take a look.
Posted by Anton Ryzbak at 7:18 PM No comments: