A Century and a half of Wargaming

I'm not referring to the time since H.G. Wells seminal book on the matter (Little Wars, a book every gamer should read, it is free from Gutenberg click on this highlighted section), I'm talking about the total years of wargaming experience that was crammed into my game room the other day when my friends Kevin, Skip and Tom all showed up to play a couple of games of Pikeman's Lament. We had all been wargaming since the late 1970's and it just stuck us just how much combined experience there was in our little company.
I hadn't seen Skip in ages, and Kevin lives on the other side of town, so we don't often see each other aside from gaming conventions, Tom is a rather more frequent visitor, but few of us are gaming as much as we would like. Skip and Kevin each brought 18 points worth of their ECW troops to stand in for Imperialists and I refashioned the Housemartin's Turks into a 36 point Ottoman force looking to seize Vienna. 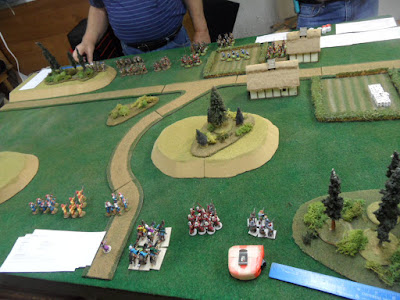 Last weekend R.U.P. presented another sailing ship action, a close fight between a couple of Napoleonic featherweights; Portugal and Spain. A follow-on to this  earlier action. The history between the nations that share the Iberian peninsula is long and acrimonious so they probably didn't need to be on opposite sides in the Napoleonic era to take a chance to have a go at one another, but any excuse is a good one when you are looking for a fight.
The problem being is that neither of these nations were on the cutting edge of naval power by the 1800's, in fact they were pretty solidly in the "has been" category. That didn't make them hate each other any less (or lessen their desire to steal each other's colonies) they just weren't real good at the fighting part of conflict any longer.
The scenario is two Spanish ships fleeing a slightly stronger (and better manned) Portuguese fleet trying to make safe harbor behind the guns of a fort. 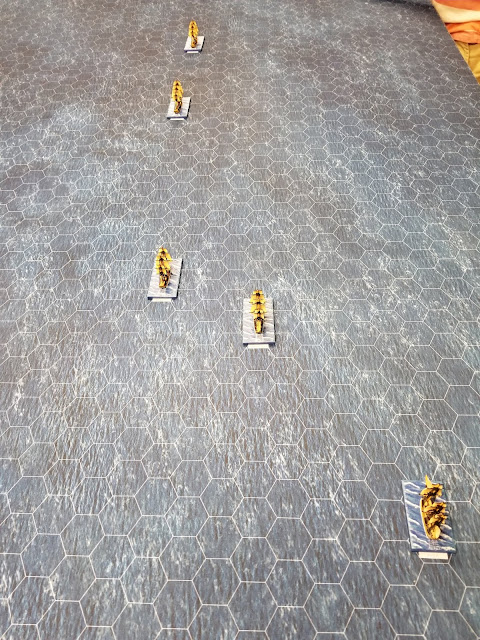 the layout, in the distance the Spanish, the nearer three ships are Portuguese,
sailing slightly faster and closing in inevitably on their prey

Half a Million hits...a pause for thought

Frankly I am a bit surprised at this success, and heartened by all the positive feedback that my ill-organized ramblings have provided. I thank all of my readers, and particularly all the kind souls who have provided advice, encouragement and honest appraisals of my work.

Having noticed the milestone it gave me a thought to look back over the last eight years and see what has been popular, what hasn't and what I could do better. Blogger provides some (very) limited data resources but, as I haven't bothered to keep track, their data will have to do.

Most Popular Post;
In the last month; Blue Board Sabot Bases
Over all time;       More Silliness with Blue Board

Now, I understand that a good few of these are from people linking to that page as an entry point to my blog instead of going to the homepage and linking from there (I have done the same thing myself with other blogs) but I do find it funny that the post that motivated them to link to my blog was one that stemmed from one of my rather mundane D.I.Y. efforts. This is further reinforced by the fact that of my organized Pages the link to Adventures in Blue Board and Foamcore  has gotten far away the largest number of hits with over 14,000

These I had thought would be more popular until just a few minutes ago when I Googled the subject, it seems that I am just one of thousands playing the "unboxing" game. Still I will continue to do them on any new figures that I purchase, I hope that they are received well as I do try to be honest and accurate (being as these are models I intend to add to my collection and not motivated by any commercial compensation).

And the last two are photo-stories, at number eight an AAR on one of R.U.P's visually stunning Cold War in Africa games; Somewhere In Africa  which I thought odd as all of his games are over-the-top beautiful and at number seven a photo report on Spartacon 2018.
I was a a bit taken aback by the low ranking of the AAR, all of R.U.P's battle reports were commented on heavily and favorably; even some of my game reports caught the attention of readers enough to get a comment or two.

These sort of stats seem to indicate that I should stick with the arts and crafts postings but I suspect that the real truth of the matter is that the AARs and figure reviews are more popular than they seem as they are the producer of many more comments. Don't anybody get your hopes up for a better, more organized and streamlined blog. It is going to remain the same part-time stream of semi-consciousness mess that it has always been.

Thanks again to everybody who has put up with me so far, I hope you continue to enjoy the hobby as much as I do!

So, I was playing around with the Proxxon hot wire cutter and made some more sabot bases . Nothing new with the techniques so I won't bore you with all that. I made them into long narrow irregular shapes to depict troops moving in files through bad terrain or (turning ninety degrees) an infantry line that has become unformed or disordered 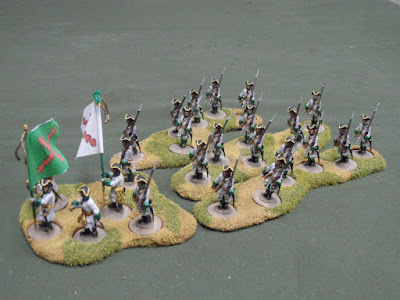 This Saturday, September 15th, Rich Uncle Patrick shall be hosting another game of Close Action, the game of 18th Century Sail. 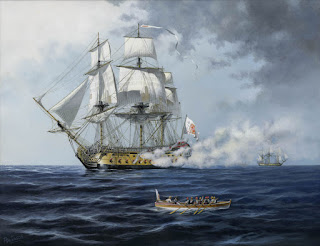 Quarrelsome Catholics face off in a small engagement of utmost enormitude and importance off the coast of South America! Gather up your men, get the blessing of your Padre, and set off on the waves to glory for crown and country*! *Glory not available on all Seven Seas. Please consult with your local governor to see if this applies to you. You must be Catholic to collect on this glory; please contact Pius VI for more details on glory and afterlife. Glory not redeemable for following things: food, shelter, money, happiness. Glory is non-returnable after 1807. Do not taunt glory. Glory should only be taken in controllable, select doses; using too much glory may lead one to Armada obsession, Imperial disfunction, and Naval gazing. Void where prohibited.

Posted by Justice and Rule at 9:56 PM No comments:

Painted minis and models for sale

My long-time friend, Tom from Texas, recently made a couple of large purchases of collections to get certain figures into his own collection. The problem being there is a very significant number of figures and models that are excess to his needs. To avoid hauling this mass of things around to Conventions trying to sell them he has set up an Ebay store and a blog to pass along the extra figures. All of the items are complete and well-painted, and he is offering them at prices at or below the cost of the miniature.

You will see him in my blogroll as The WargamesAlchemist

The Ebay store can be found here

He assures me that new items will be added daily so keep an eye out for that certain something to add to your toy collection.
Posted by Anton Ryzbak at 7:07 PM 5 comments:

Blue Board Tower and base completed 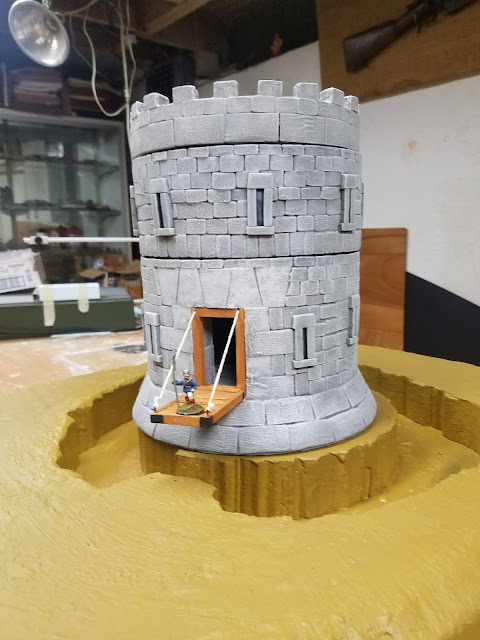 the tower, as we last saw it

It was far too miserable to be outside today so I bestirred myself and retried to the workshop where I found my tower in the same state that it was a week ago. Shamed by my sloth I decided to put in a couple of hours work and get this thing done. The first step was to find my container of Tidy Cat kitty litter (always buy the unscented variety) this was liberally applied around the foot of the cliff and the inside edges of the moat. Soaked in a mix of Titebond wood glue and water and left for an hour or so this sets up quite hard and looks rather nicely like mounds of small rocks.