R.U.P. brought by some of his lovely toys and taught J&R and myself a new Naval Wargaming rule set called Close Action. These play with a similar level of granularity as Wooden Ships and Iron Men but emphasize different aspects of sailing and combat. I enjoyed them very much even though I had a slow pig of a ship and an hilariously incompetent crew. We played using R.U.P.'s beautiful collection of GHQ Micronauts on a Deep Cut Studios sea mat, the boats are mounted on Langton Miniatures bases.

The scenario is a simple one, on 20 April 1776 the Spanish 70 gun ship of the line, the San Augustin, is fleeing from two Portuguese ships the 64 gun Prazeres and the 32 gun Pilar. The San Augustin is trying to get to safety under the guns of the fortress on Santa Catarina island. The San Augustin has one huge problem; she has been at sea for far too long and her bottom is badly fouled rendering her very slow. And, by the way, the crew of pressed farmhands and shop clerks have very little training and very poor morale. 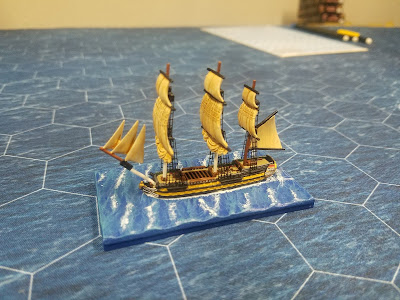 this is my Spanish ship, the San Augustin, 70 guns, captained by Don Jose Techain
R.U.P. always goes all-in on his projects,
he is currently completing another forty or so of these GHQ beauties 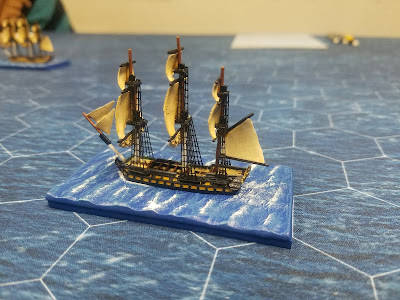 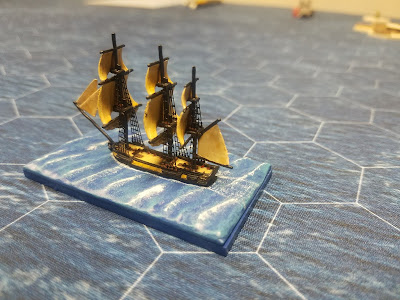 and the Portuguese frigate, the Pilar, 32 guns,
under the orders of Capt. Arthur Phillip
lightly built but with even better speed, handling and crew 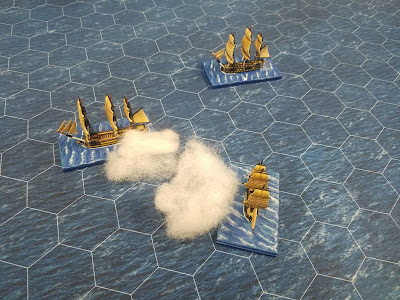 unable to outrun the Portuguese I tried dodging from side to side to upset their plans,
unfortunately I dodged into as many broadsides and I ducked away from 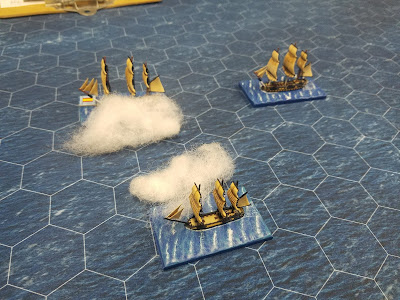 R.U.P. smartly handled his frigate,
and clung to me like a pit-bull with a mouthful of mailman,
trading broadside for broadside 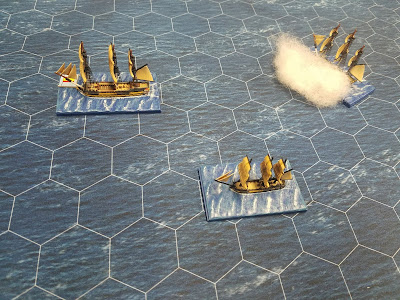 and, on the rare occasions I dodged the Pilar's fire
I caught a tailpipe full of cannonballs from the Pazeres 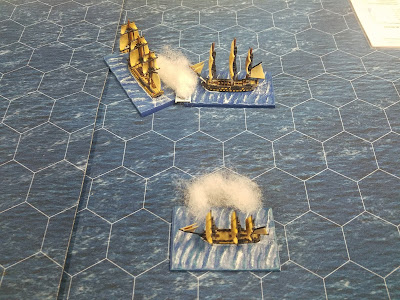 on the odd occasion when I did everything right and got a bow-rake in on the Prazeres,
I still received a stern-rake from the Pilar 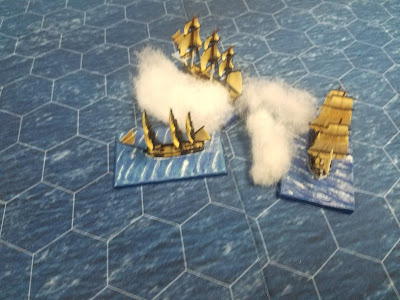 crew exhaustion plays a role under these rules, firing constantly kept reducing my crew's ability to effectively serve the guns, as a result I became progressively less dangerous to the Portuguese ships.

The game came to standstill when I crossed the bow of the Pilar and we became fouled. By this point my crew was so beaten down that my cannon fire was nearly harmless to the plucky little frigate, and they were too dispirited to form a boarding party to board the Pilar, heck they didn't have the energy (OK, actually it was some terrible die-rolling, nine successive fails at a 33% chance!!!) to cut away the fouled rigging. I was eventually able to clear the decks of the Pilar through musketry from my Marines but even then my crew refused to board her. All the while the Prazeres was sailing around me pummeling my boat with canon fire. Eventually common sense broke out and I struck my colors.
This was a neat test of these rules, I do like them a lot, particularly the effects of declining morale and exhaustion among the crew. I am sure we will be returning to these rules soon.