I have never been a patient man, waiting is what I do worst.

While working on my War of the League of Augsburg rules it was apparent that handling the loose figures was not going to work and I needed to base them as groups rather than individuals. But I didn't want to base them all only to find out that a change was needed or, worse yet, that I was scrapping the project and going back to just using them in skirmish games.

Then it struck me that all I really needed was sabot bases that would fit the pennies that the figures were mounted on. A quick search on the internet revealed several sources that would happily make the bases for me; but I would have to wait until they were made and shipped! This wouldn't do.


Fortunately I remembered the device that I had made for cutting portholes in my model boats. Nicknamed "The Shiv" it was little more that a bit of thinwall brass pipe with the end of the pipe sanded to produce a cutting edge around the lip. All I needed to do was find a bit of pipe marginally larger than a penny and I would have a die cutter for my sabot bases. 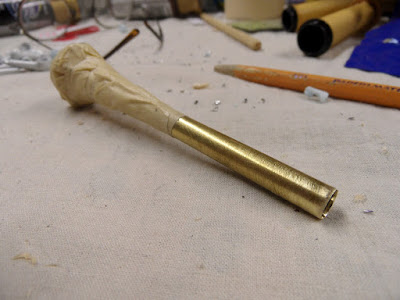 A search of my "useful bits" bin failed to turn up a piece of pipe that was the right size for the project so it was off to the building supply store. Frustratingly the supply of metal pipe did not match (even close) the size of a penny. I dug around until I found a plastic T junction that would work. I took a craft knife and removed a lot of the thickness from the inside of the pipe and then sanded the outside with 60 grit sandpaper to get a finer edge and provide some "tooth" to aid the cutting. Quite pleased with my inventiveness and cunning I tried out my invention on a bit of heavy mat-board that I intended to use for bases. It was a fiasco, the tool left a tidy circular mark on the heavy stock but nothing more. 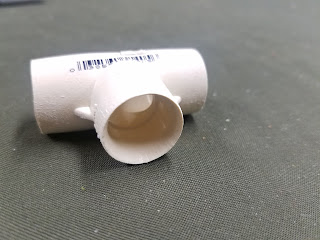 the T junction after its first test, look how sad it is

Suitably chastened I sat and considered what other material was the thickness of a penny and would be easier to cut than heavy card-stock.  Balsa was a failure, just splintering under the pressure, and basswood would be more expensive than laser-cut MDF.  By chance my eye fell upon the Proxxon hot wire cutter and, as I stood there wondering why I hadn't put it away as I should, it struck me that the upper layer of a sabot base only needed to be sturdy enough to keep a penny in place. BINGO!! Problem solved! 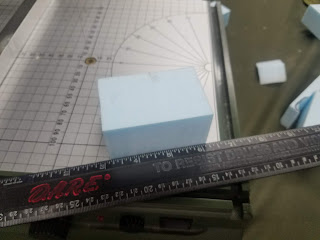 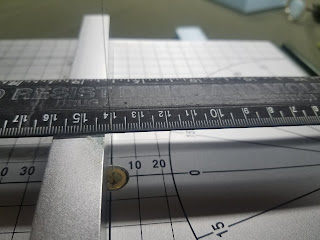 then I set my faithful sidekick to cut  2mm slices 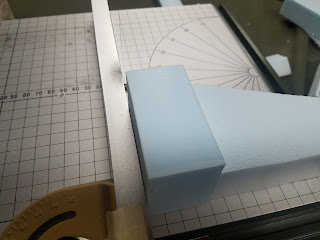 and I made 2mm thick rectangles 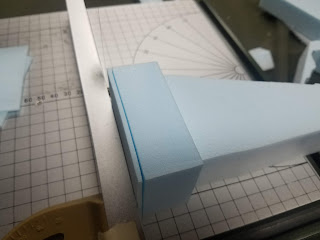 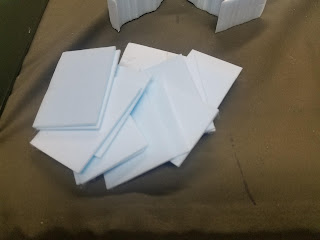 in a few moments I had the blocks all sliced up 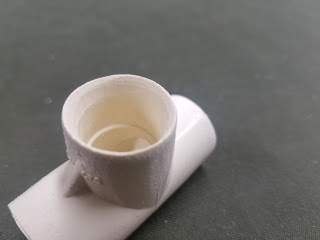 a closer look at the T junction,
you can see the inside of the pipe where I thinned out the sidewall
and the tiny "teeth" that sanding the outside with coarse sandpaper  created 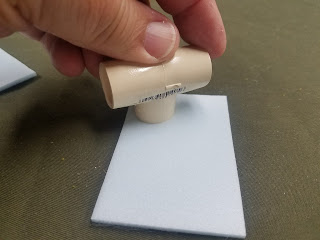 a simple matter to pressing gently and twisting, much like a keyhole saw 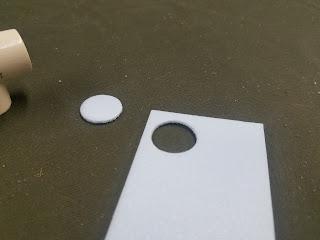 and there you have it 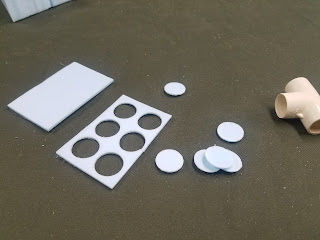 five more passes and it is ready to go 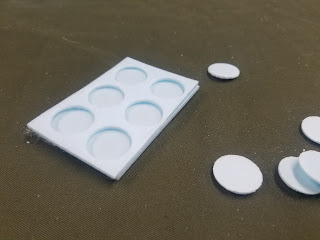 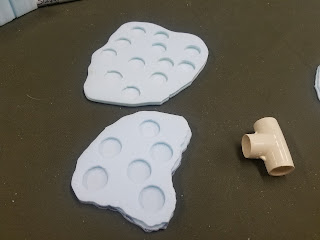 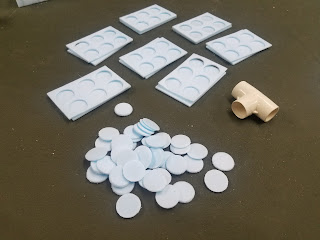 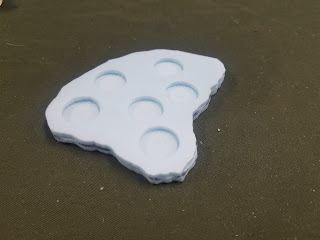 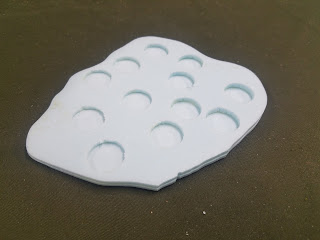 I made bases for over 200 infantry figures in very little time and at nearly no cost. This sort of method can be extended to all sorts of uses; any rule set that calls for large numbers of individually based figures will play faster using such bases to ease movement.