Both Joe and I had an evening available so I once more imposed on his good will for further testing of my rules. The scenario was a follow-up to the previous one; with the success in the last battle the French were able to force the Allies to turn and fight a major action. Unbeknownst to the Allies the wily French had dispatched a force to turn the Allied flank. Discovering this threat at the last moment the Allied commander sent a brigade of foot and a couple of guns with the intention of slowing the French enough that they would arrive too late to affect the outcome of the main battle. 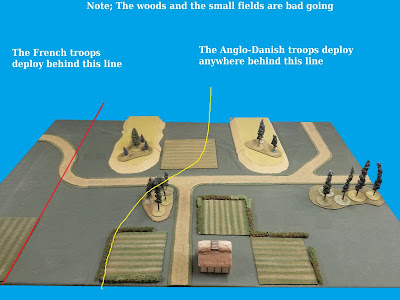 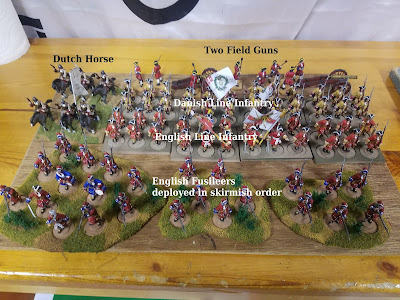 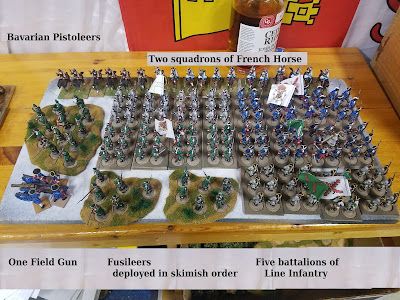 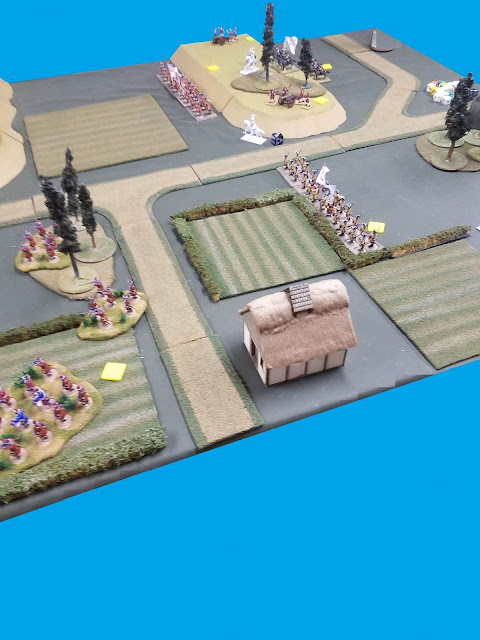 the English deployment; fusileers pushed forward into the bad-going
in front of a solid line backed by the cannon and the lone cavalry squadron 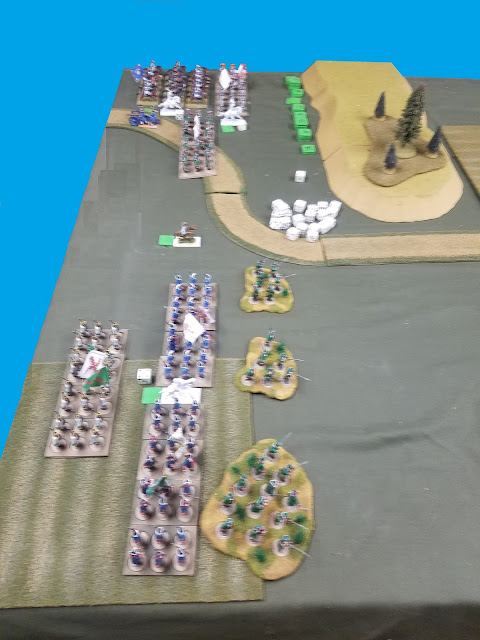 the French sledgehammer; three Line battalions fronted by skirmishing fusileers on the right, on the left we see two more battalions and all three cavalry squadrons,
the CinC held the center by himself 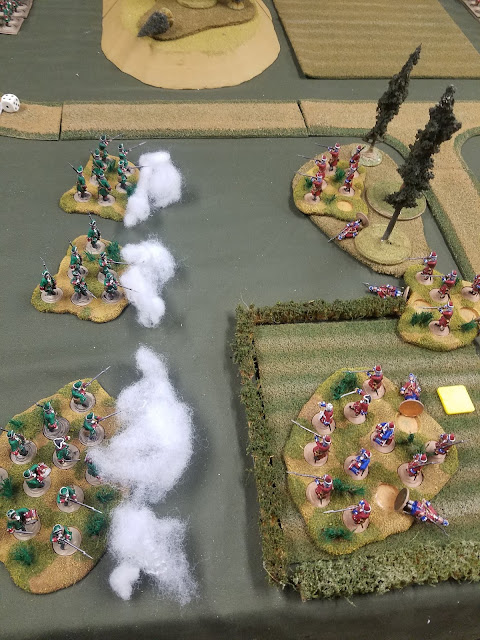 first blood went to the French fusileers, downing five of the Englishmen
surprisingly their return fire inflicted even more casualties and drove off the French light troops 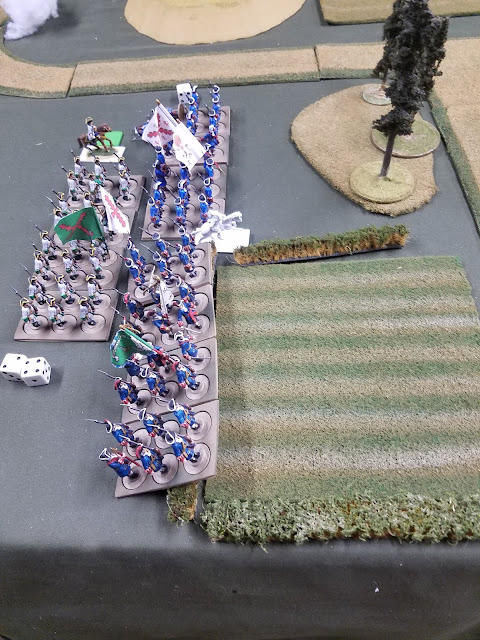 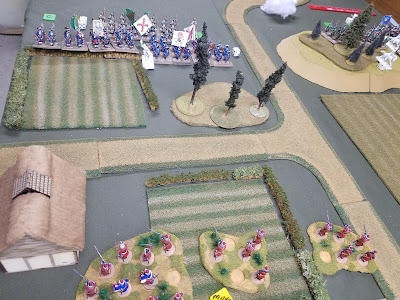 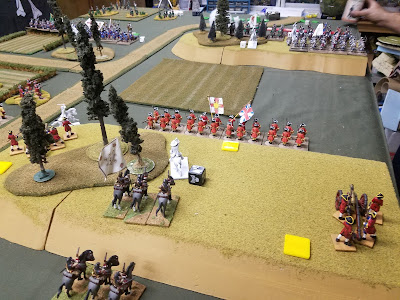 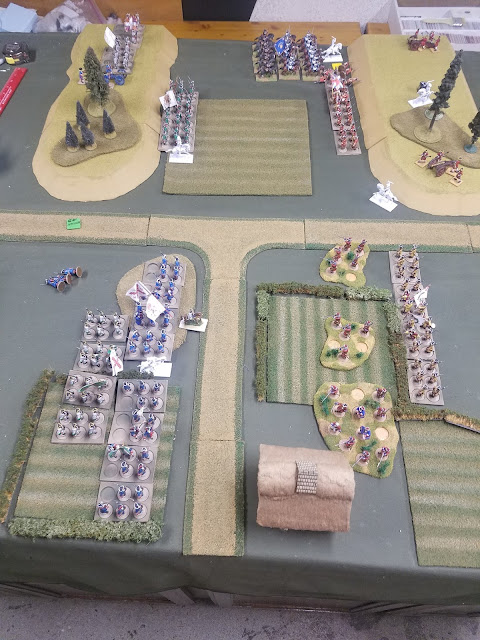 this may have been a bad decision,
when the Foot failed a morale check and fell back behind the Horse
the bold French cavalry now advanced at full speed
take a moment to look at this picture,
it was the last moments of the Anglo-Danish brigade as a fighting force the flood-tide of French horse now threatened the British right,
the gunners hurriedly rammed home a double-shot of grape to welcome Louis's horsemen
I issued a "Stand Ready" order to them but then rolled horridly in the Command Phase
thus  allowing the French to act first 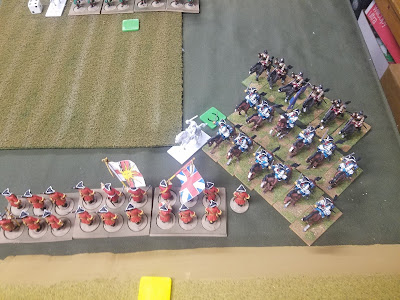 the wily French charged the British Foot instead 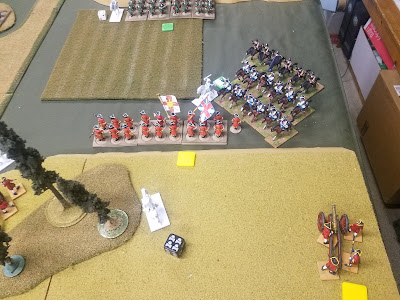 the doomed Foot got off a steady volley and dropped four French cavalry
Joe, of course, passed his morale check with flying colors
and inflicted a shattering eleven casualties to the Foot who replied with a feeble four 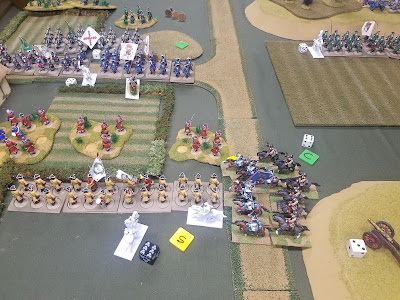 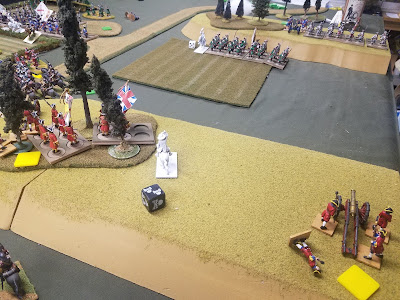 suddenly my commander was in charge of little else but a gun! 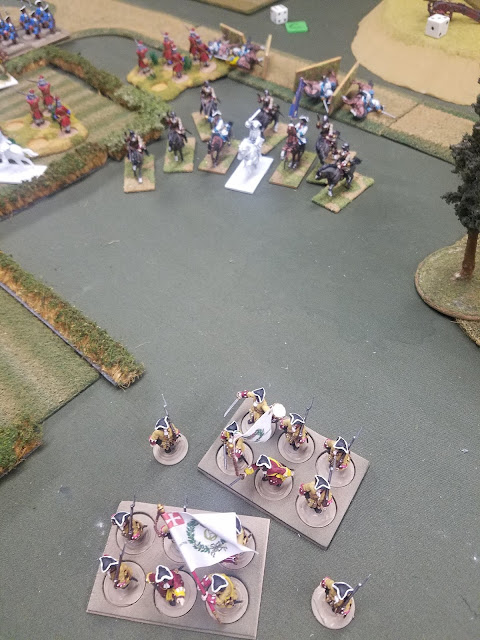 unable to fire, the Danes took a blistering ten figures in casualties
while doing only four in return to the frothing Frenchmen
the Danes found that discretion was the better part of valor and retired 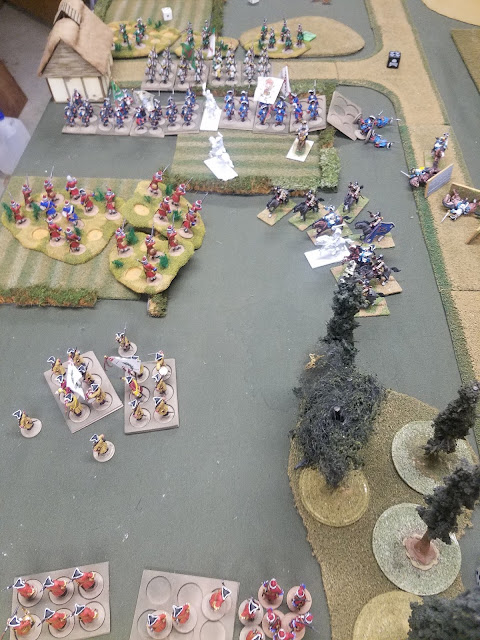 This game was intended mostly to test the Light Troops rules. After due consideration (i.e. Joe and I talked about it over a couple of beers) we decided that the shooting of Skirmishers was too effective and we are changing it to one die per three figures instead of one per two. In other respects they seemed to work well enough and we will test them further before other changes. The game stood out with Joe's uncanny ability to roll very well in the Command Phase on the turns when he needed the initiative  giving him the option to act or force me to take my actions first, on several occasions it saved his Foot from further pounding from my guns and at the end he was able to deliver the crushing cavalry charge unhindered by my laggard command staff. Jolly good fun all around, and done start-to-finish (not including the beers) in under two hours.
Posted by Anton Ryzbak at 10:50 PM