Have you had enough of fantasy RPG stuff? Tired of Tolkien? How about some old-fashioned rank&flank massed fantasy battles with loads of beautiful minis? Bastion Gaming Center will be hosting a Conquest Hobby Day on July 30th from Noon to 9pm. to introduce new players (and encourage older ones as well) to Parabellum's fantasy army battle system called Conquest.

There will be a group painting area where we can show off out talents and encourage others, and pick up tips and pointers, a Paint and Take table for interested folks to try their hand along with demo games so that you can give the game system a try. I have seen the minis up close and can say that they are exquisitely detailed and crisply cast so painting will be a joy. If you wish to try a game you can find a free copy of the rules here.  There is a regular group playing Conquest on Tuesday evenings aty Bastion and they would be delighted to have new players join in the fun.

On top of everything else there will be free pizza for all participants.

This is really worth a look!

Posted by Anton Ryzbak at 1:56 PM No comments:

Surprise for Everybody! Game at my place Saturday 23JUL22

Posted by Anton Ryzbak at 8:55 PM No comments:

A Surprise for Anton, updated with some results

Anton and I have been reinvestigating the first major gaming craze of our careers.  WRG 6th Edition. 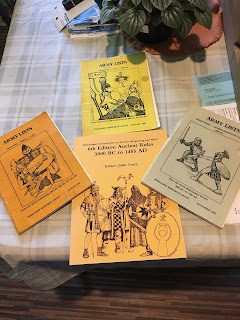 Read more »
Posted by The Housemartin at 7:00 PM 4 comments:

This was the last biplane fighter accepted into Imperial Japanese service. It was a product of the "dog-fighting school" of aerial combat and emphasized maneuverability over speed and firepower. Early in the Second Sino-Japanese War it was very effective but it was a design dead-end and the Japanese (and almost all of the rest of the world) got out of the combat biplane business. There is a useful Wiki here.

Both the X-Otic and ICM kits leave a lot to be desired  but will do for wargaming items. As usual I assembled these with steel plugs inside the fuselage to allow for mounting on my adjustable magnetic flight bases.  I find the biggest disappointment to be that even though the aircraft are shown with spats in the box-art there are none to be found in the kits! I have had these around as completed kits for some time but finally got around to applying paint and decals. With these four I have completed my 1935-1941 collection (yes I know there are tons of Japanese light bombers and fighters not on my list but they are only available as expensive epoxy kits out of the Czech Republic). 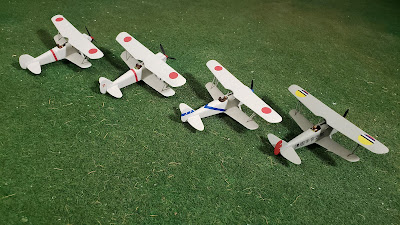 the odd multi-colored roundel on the aircraft on the right mark it as a
member of the  Manchukuo Air Force, a puppet empire
set up by the Japanese with the Last Emperor of China as it head 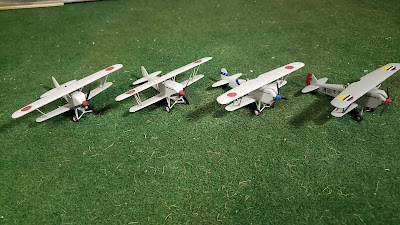 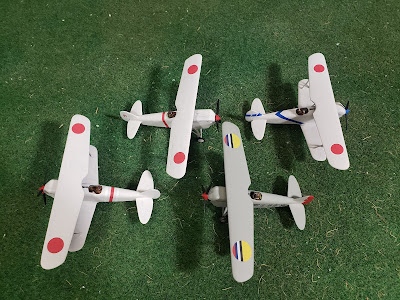 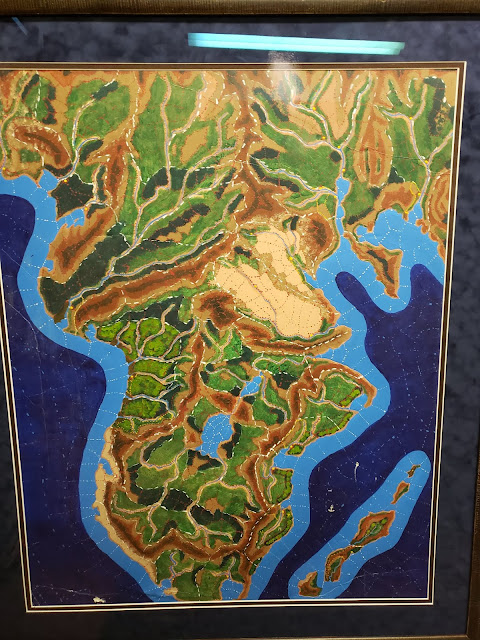 Daftrica, the grand-daddy of my full color maps

I have been fascinated by maps since my childhood. The concentration of information that a good map represents is a wonderful thing. My wargaming with maps started when my brother and I got a copy of Avalon Hill's "Luftwaffe" for Christmas, we played that so many time the counters fell apart. A short while later we discovered "Panzerblitz" this had geo-morphic maps that contained much more information. It opened our eyes to lanes of fire, reverse slope positions, and using terrain to mask our maneuvers.

I had fallen victim to a schedule that became wildly more demanding through June. I think that for the next few weeks life may be somewhat more normal. I can't promise a flood of new posts but here are some Victrix 28mm French Guard artillery that I painted in the past couple of weeks. I like them a lot less now, there is little flexibility in the posing and the figures are difficult to arrange around the guns in a convincing manner and still fit them onto a normal-sized base. They are rather pretty sculpts however. 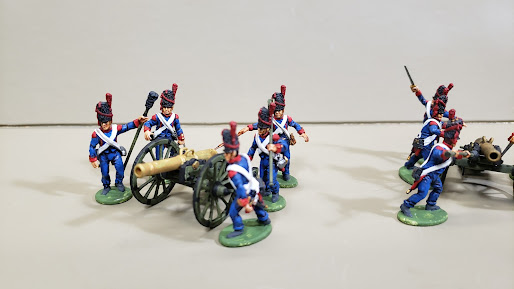 I haven't decided yet whether to mount them on pennies (as per usual)
or just attach the guns and minis to the base
Read more »
Posted by Anton Ryzbak at 10:25 PM 2 comments: