For the second year in a row the weekend of Spartacon was not the winter storm of the year. This sort of thing makes me worry. Anyways I attended with some of my buddies and we had a blast. The venue was the same as last year, Lansing center in the "small room", well lit, comfortable and warm. The games were up to the usual high standard, visually sumptuous and well-run.

I ran my Wild West Shootout game and had a jolly good time playing in a delightful ironclads game. This little gem was presented by Doug Johnson and involved rules of such staggering complexity that they all fit on one half of a standard sheet of paper (see photos) and vast fleets of scratch-built models. 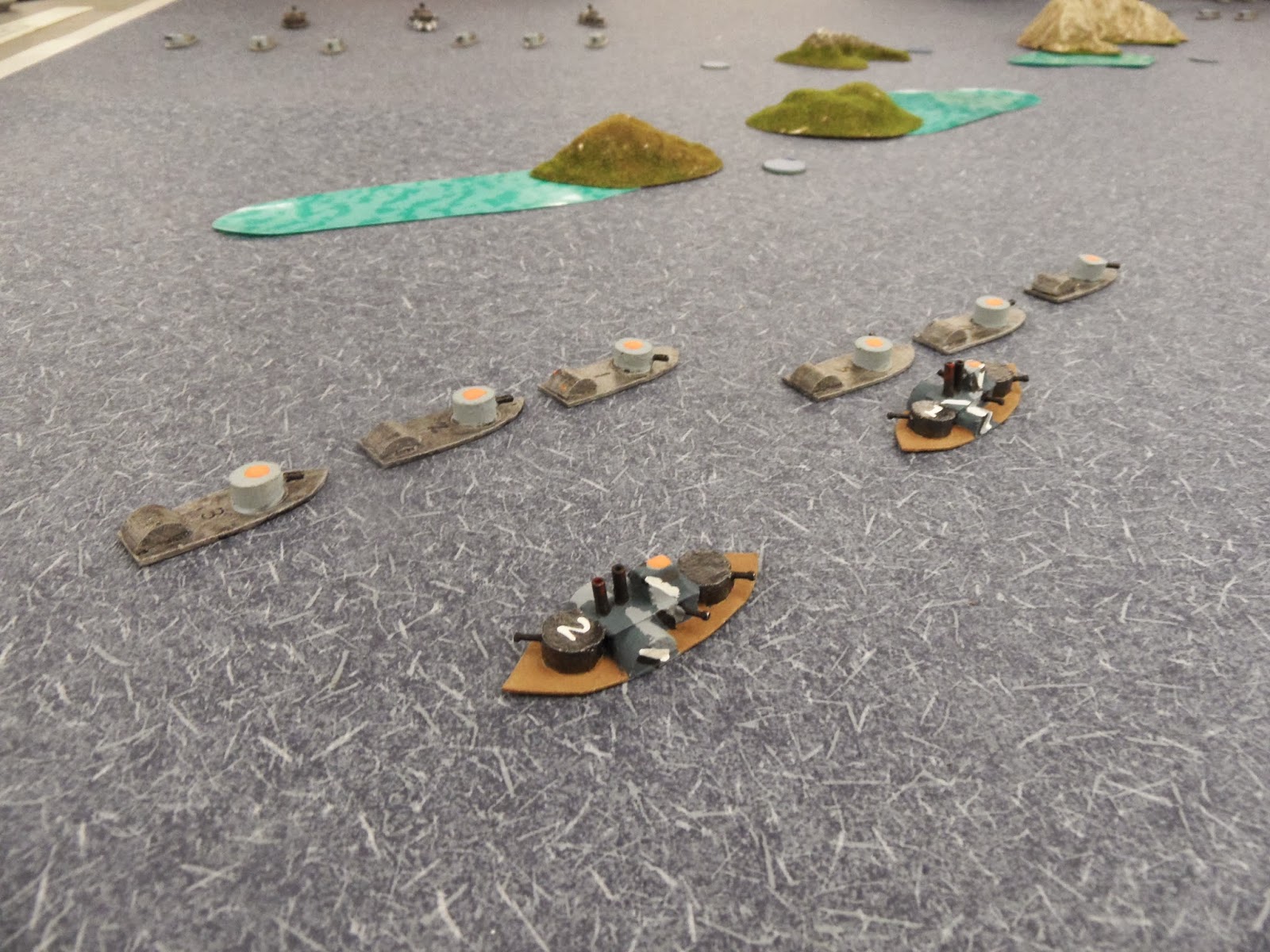 My brave squadron heads off to battle,
the small gray vessels are monitors, the larger ones are battleships 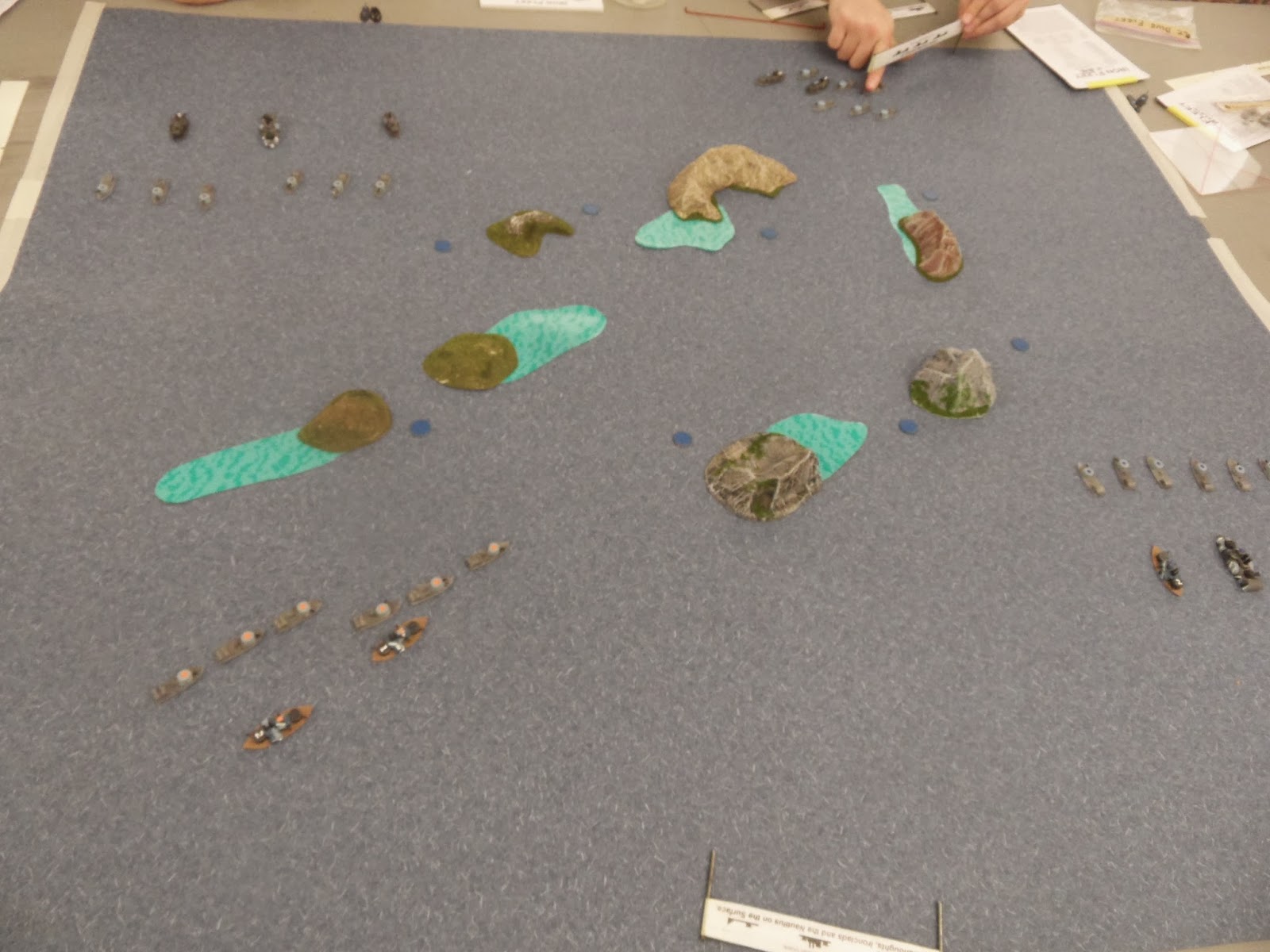 the overall scenario, I am on the lower left, my ally Brad is on the lower right,
opposing us are the combined fleets of Pat (upper left) and Kris (upper right)
Our plan was for Brad to fix Kris while I dashed up the slot so the we could
overwhelm  our opponent's left 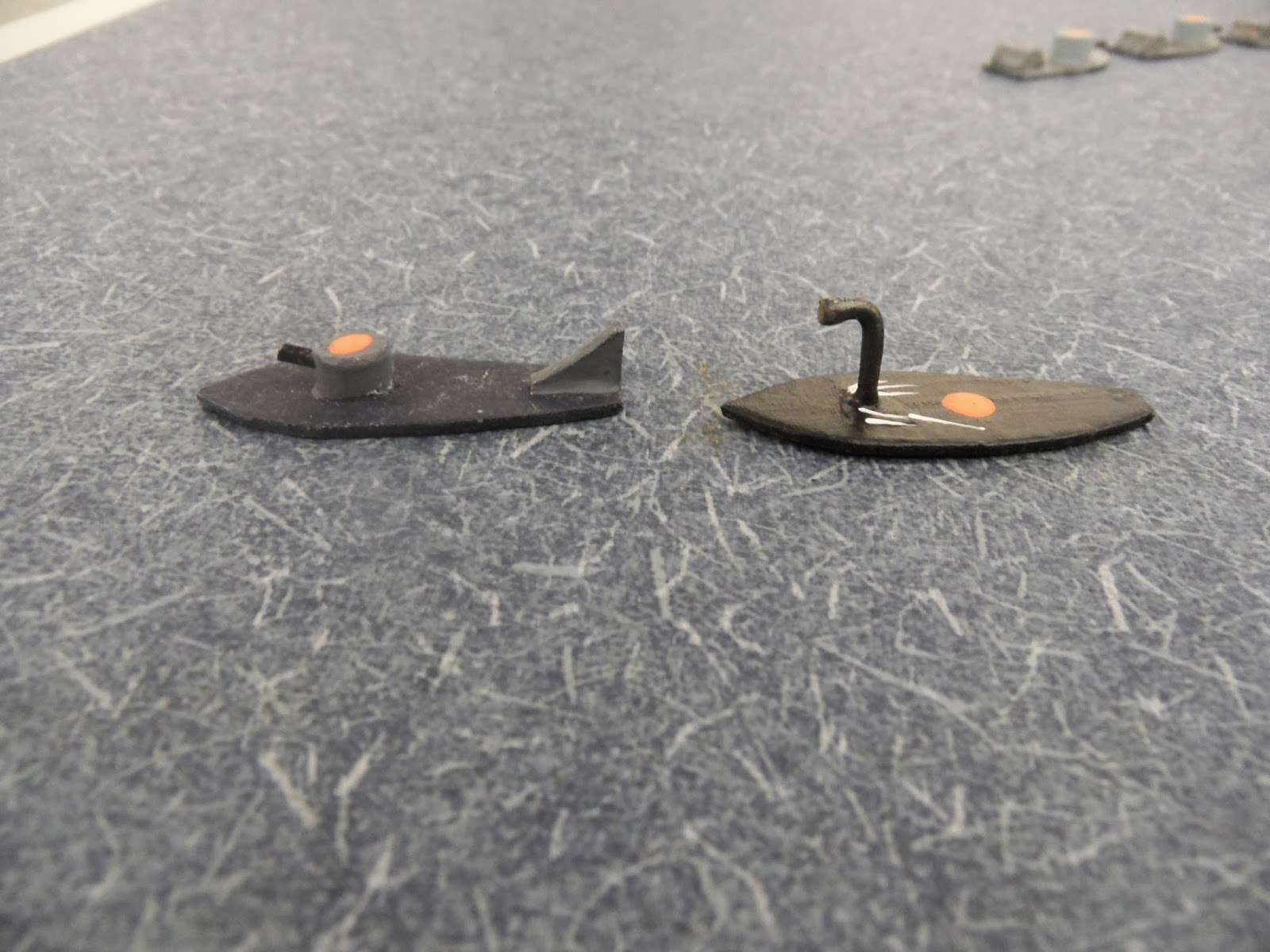 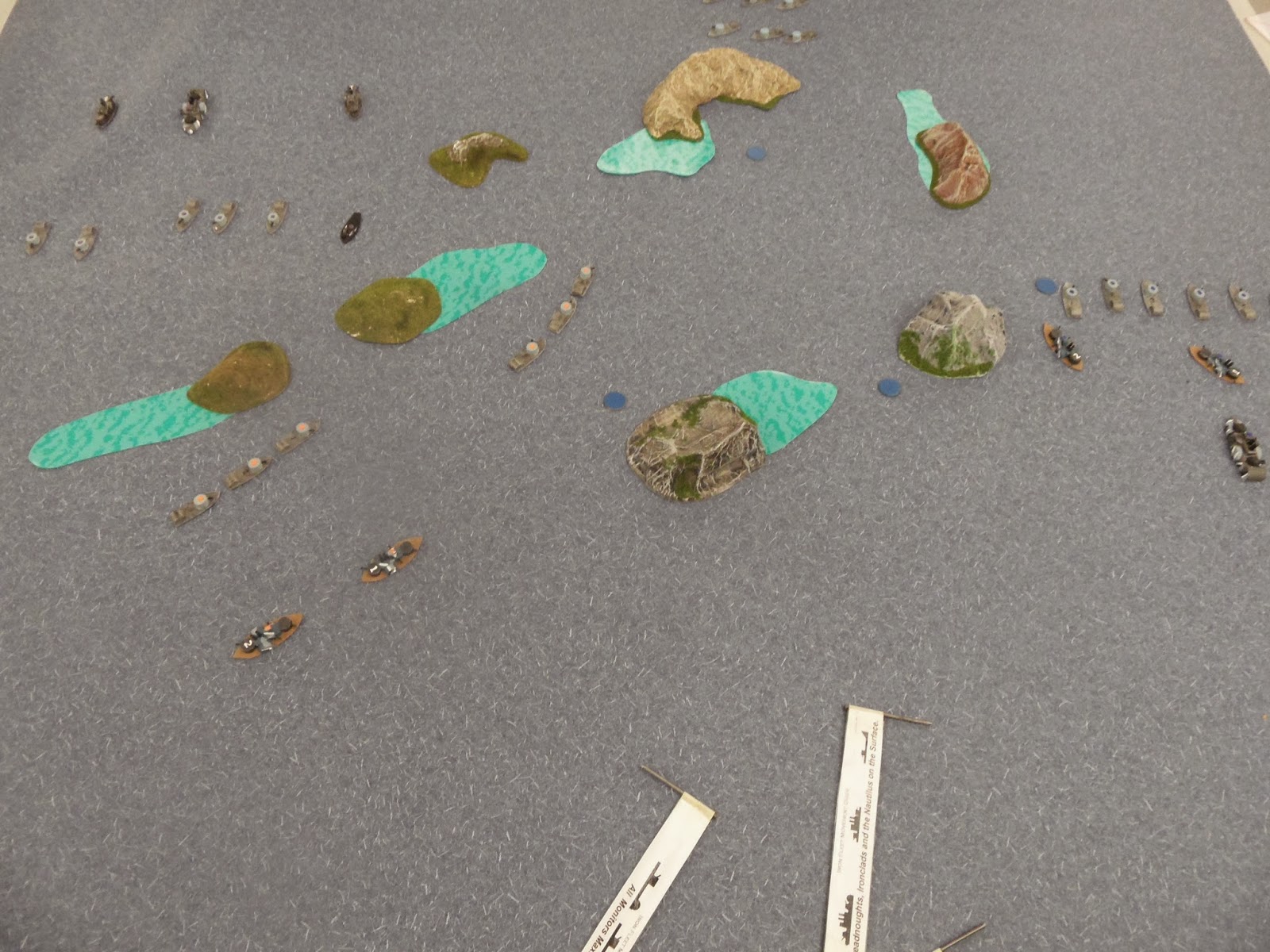 as with all battle-plans things went wrong right from the start,
Kris conducted a hard to starboard and ducked behind some islands,
out sight from Brad's guns and still out of range of mine,
meanwhile Pat charged hard straight at me 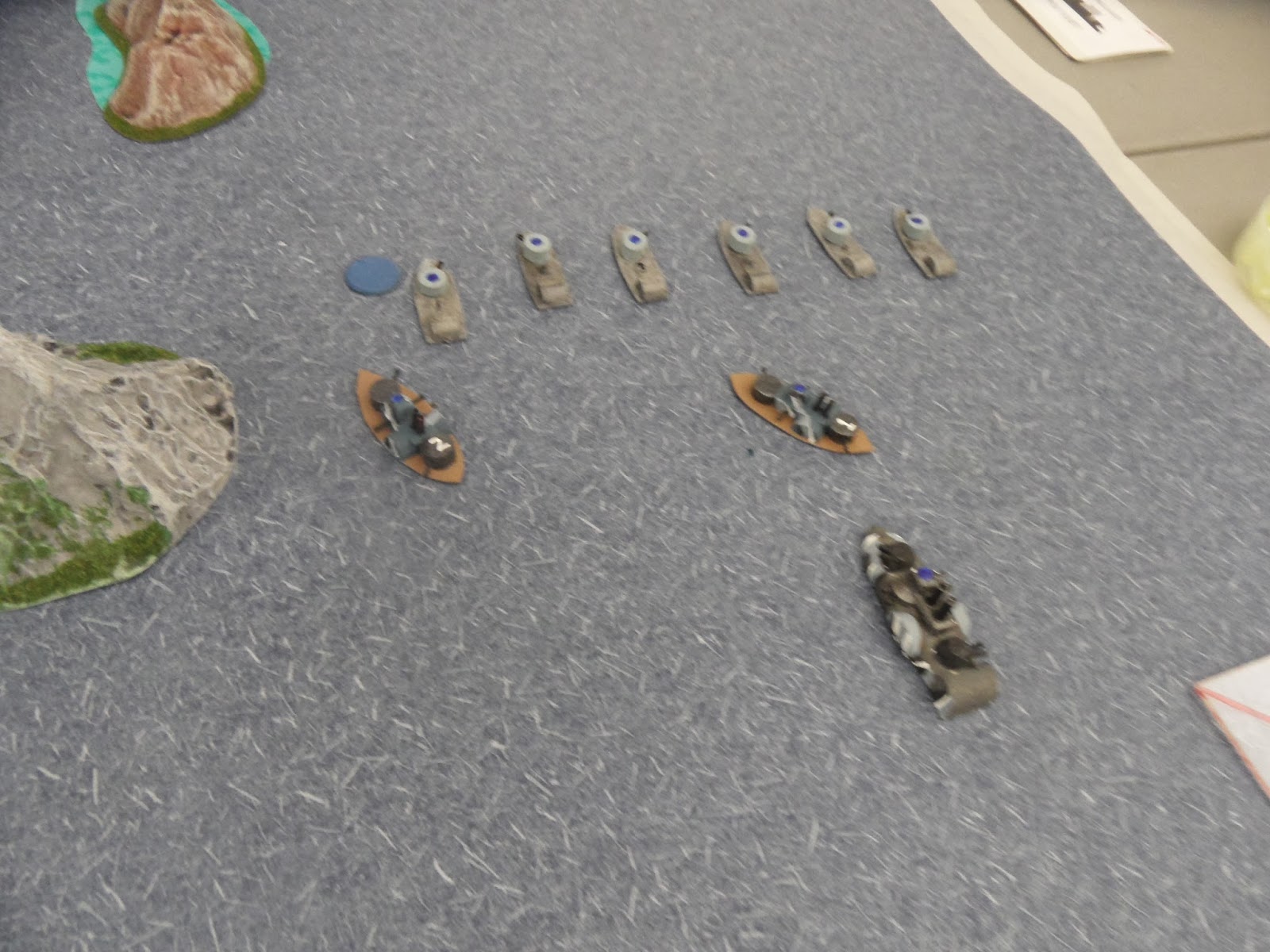 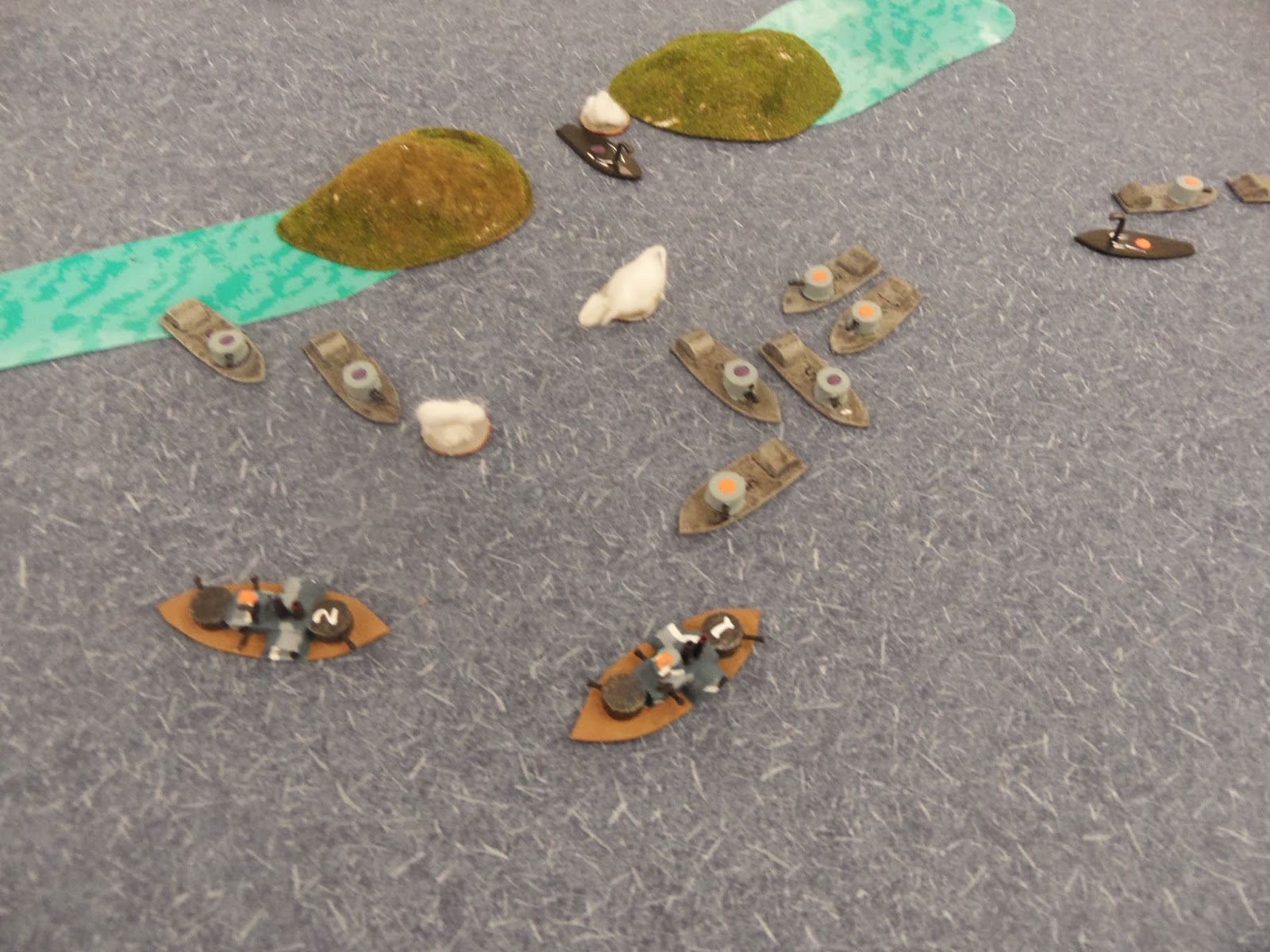 on my side things had gotten very sticky;
Pat's speedy monitors closed with my flank
and I had to reverse my battleships to sort them out 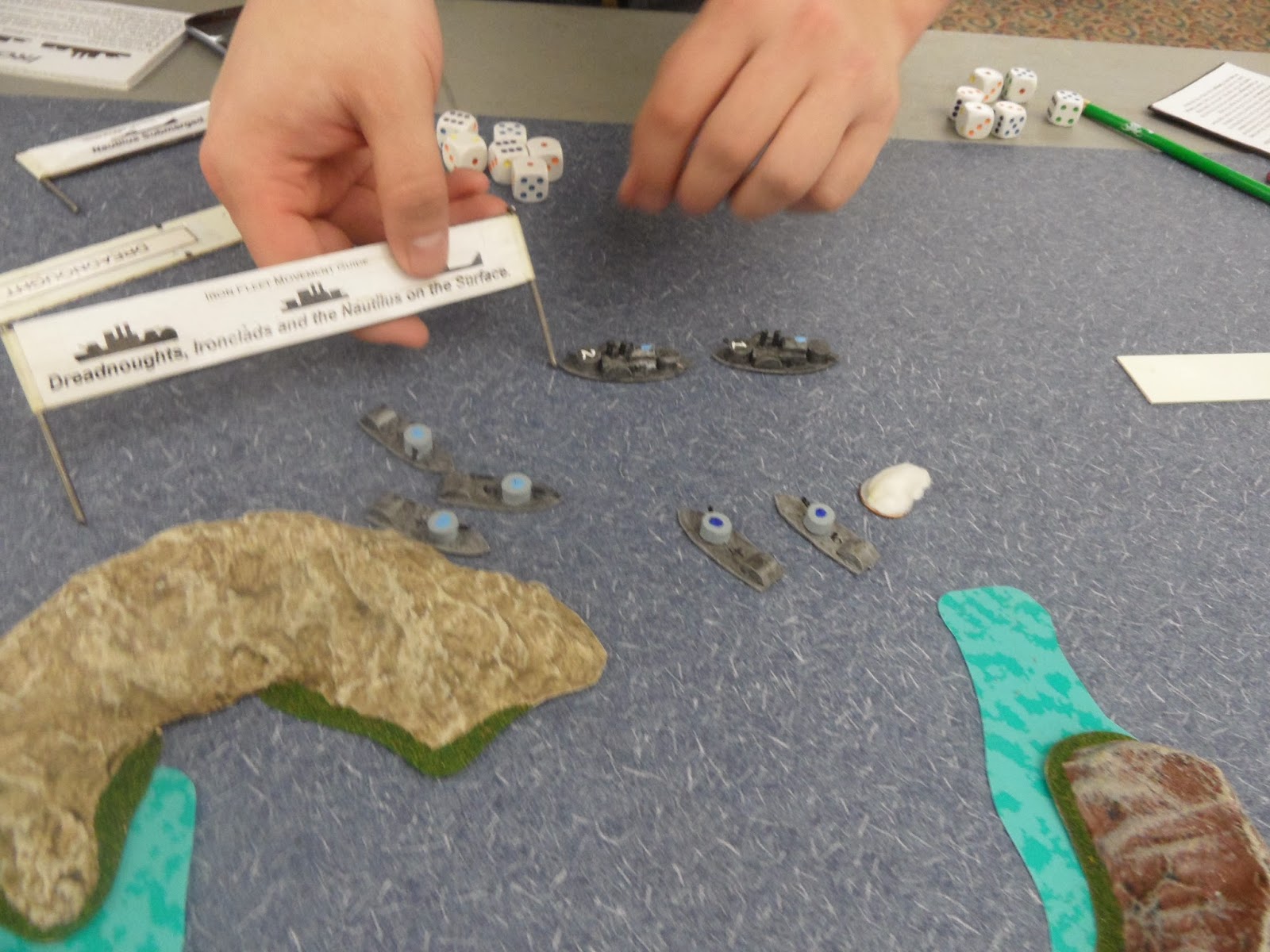 movement seems laughable simple (at first) you place the rear pin of the movement widget on the stern of the model in question and then place the prow of the model on the other pin parallel to the length of the widget, easy enough when sailing in line but maneuvering around islands and other vessels can get very tricky indeed 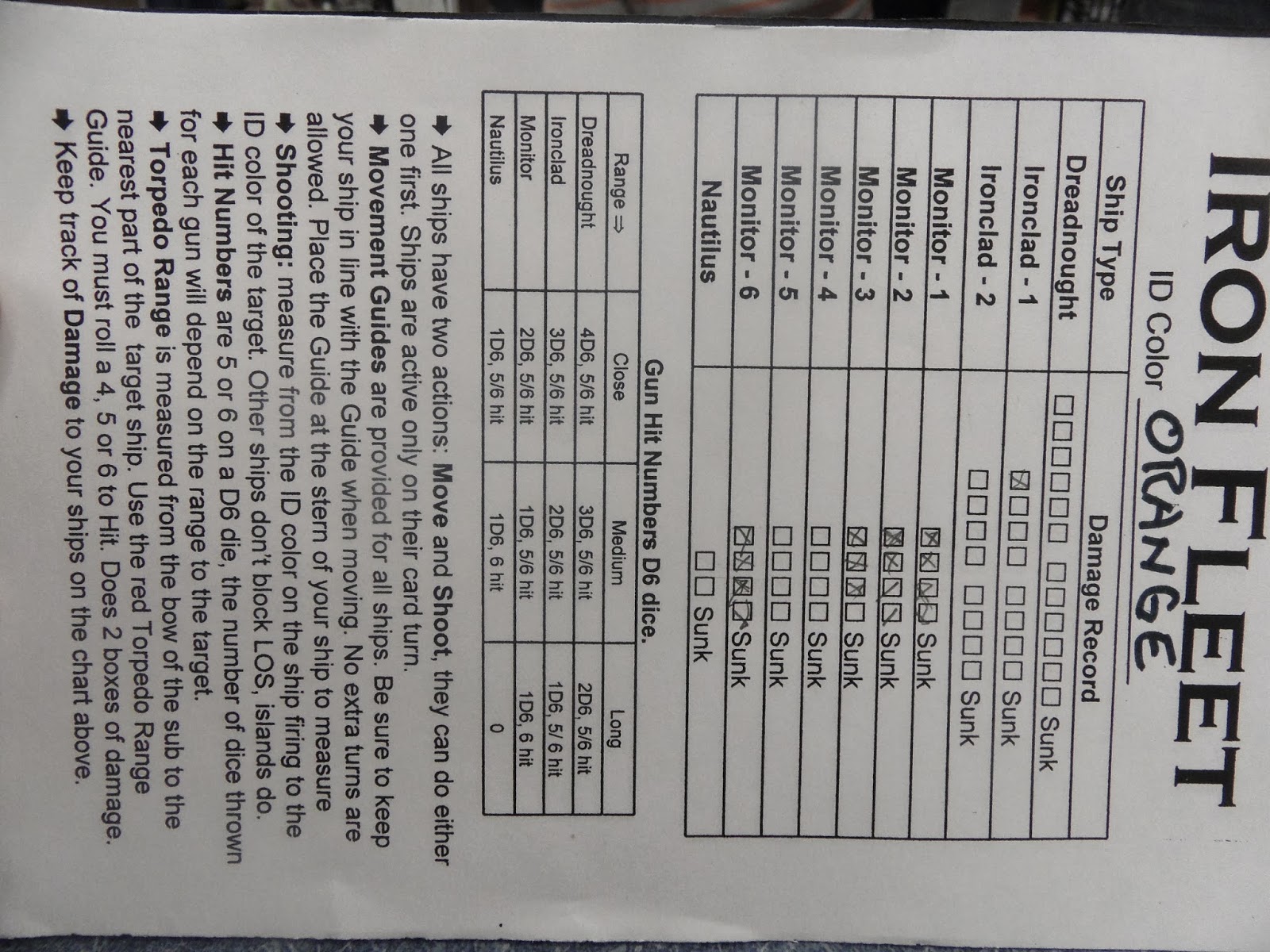 data sheet for a fleet, each hit takes a box 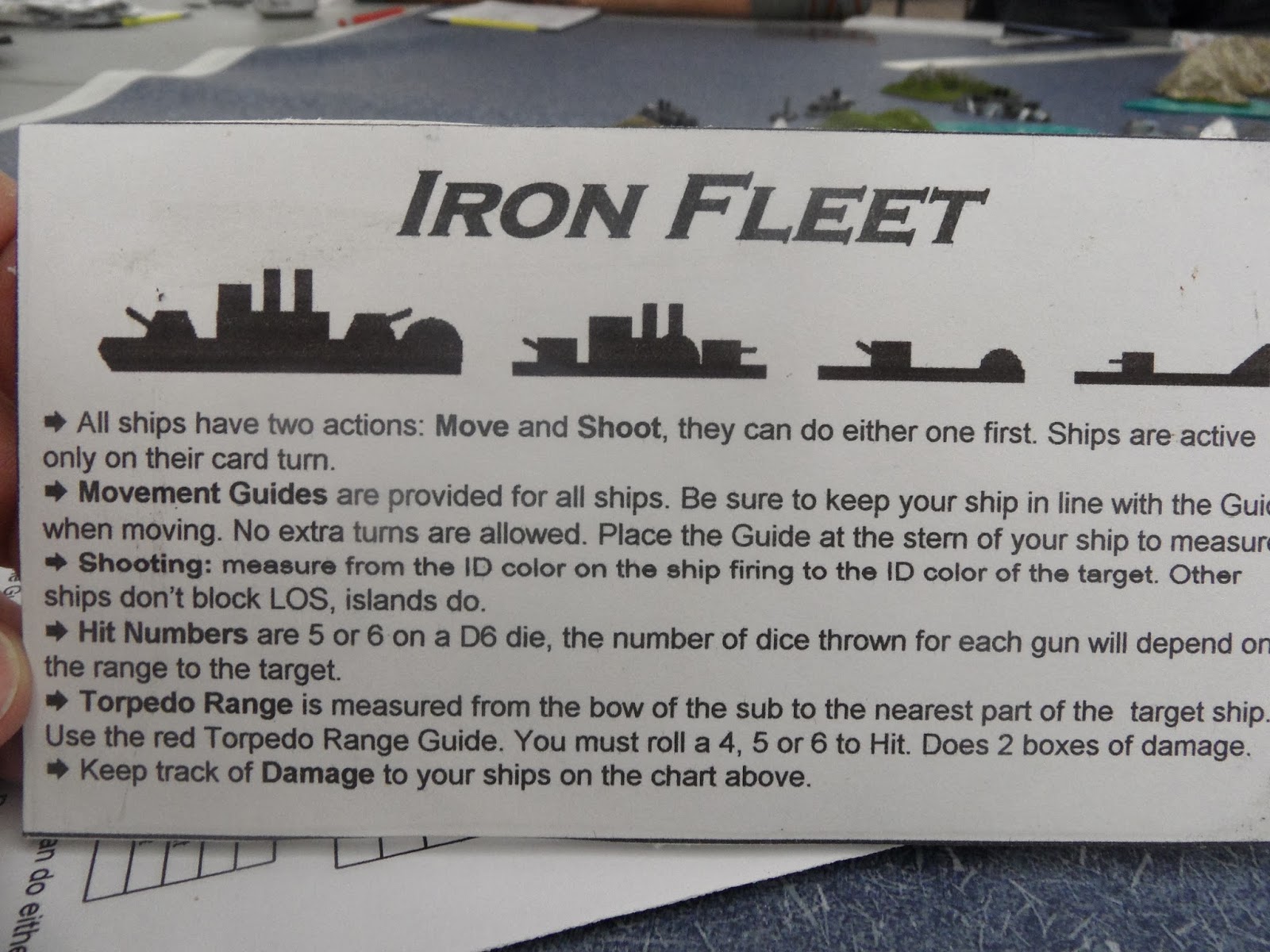 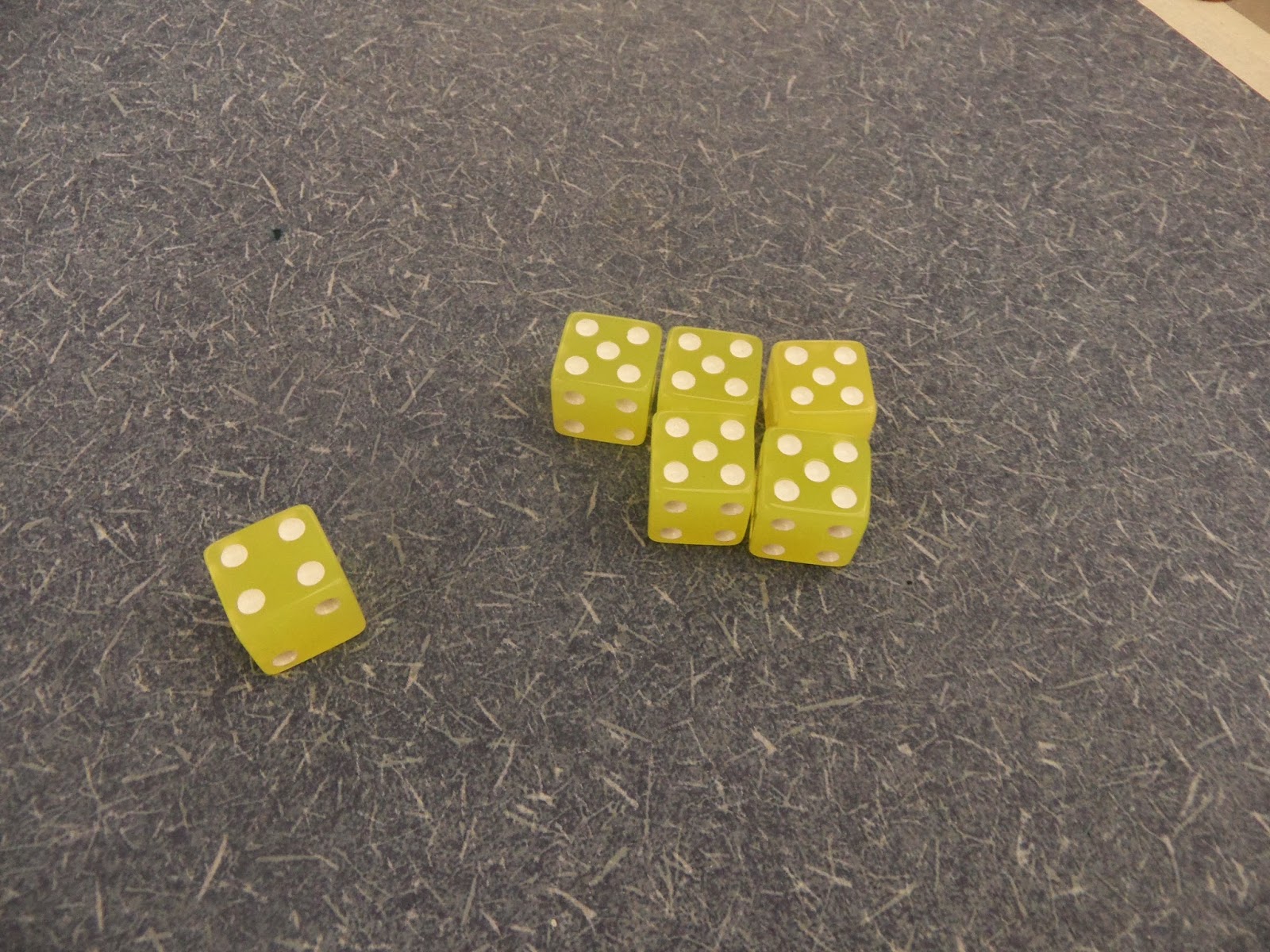 "you neeed fives or sixes to hit"
it was Brad's best day EVER with the dice,
rumor is that this carried over into the second session 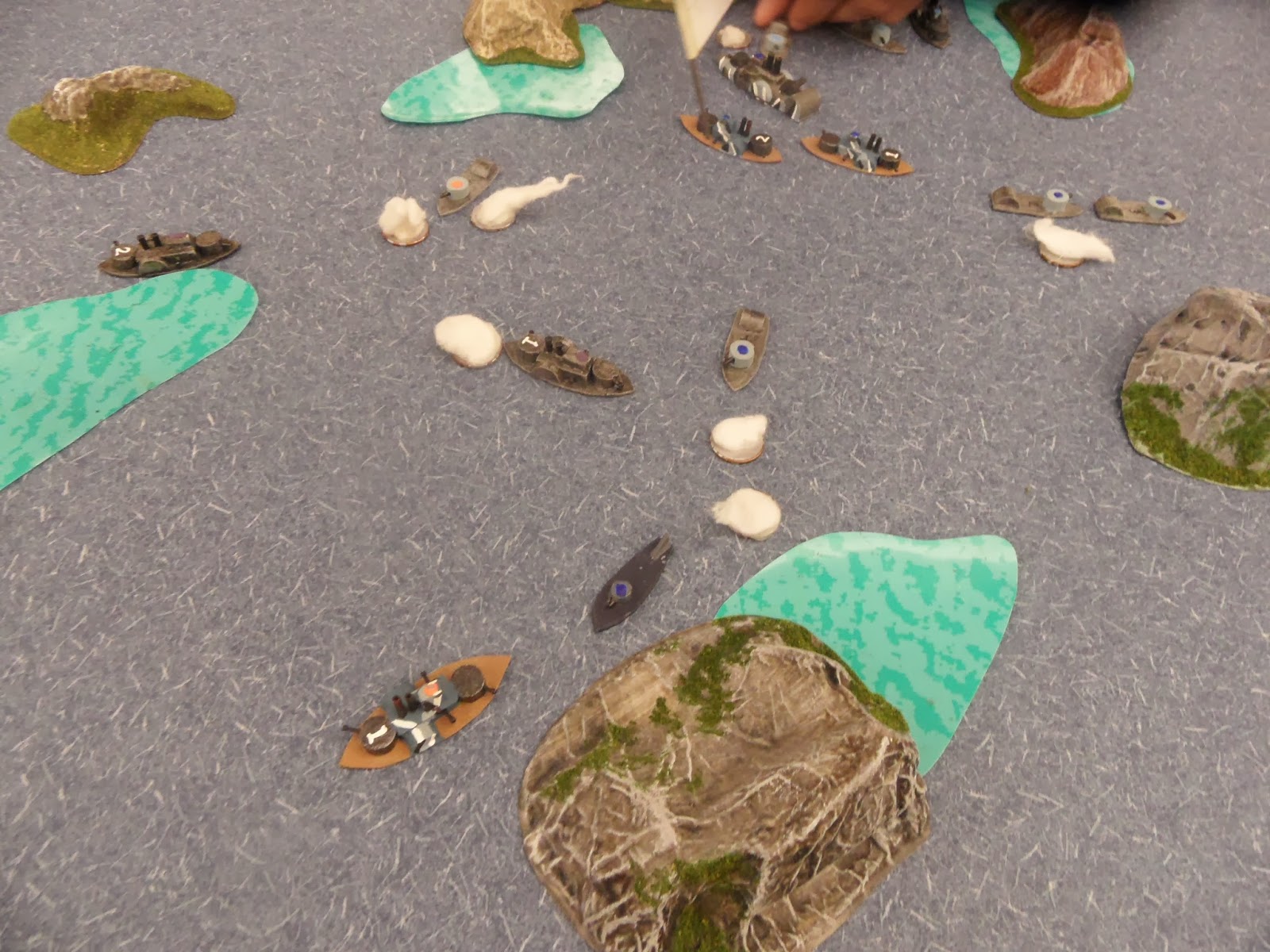 having sorted the monitors,
my battleships now hurried back to the main action
only to find Pat's battleships already there 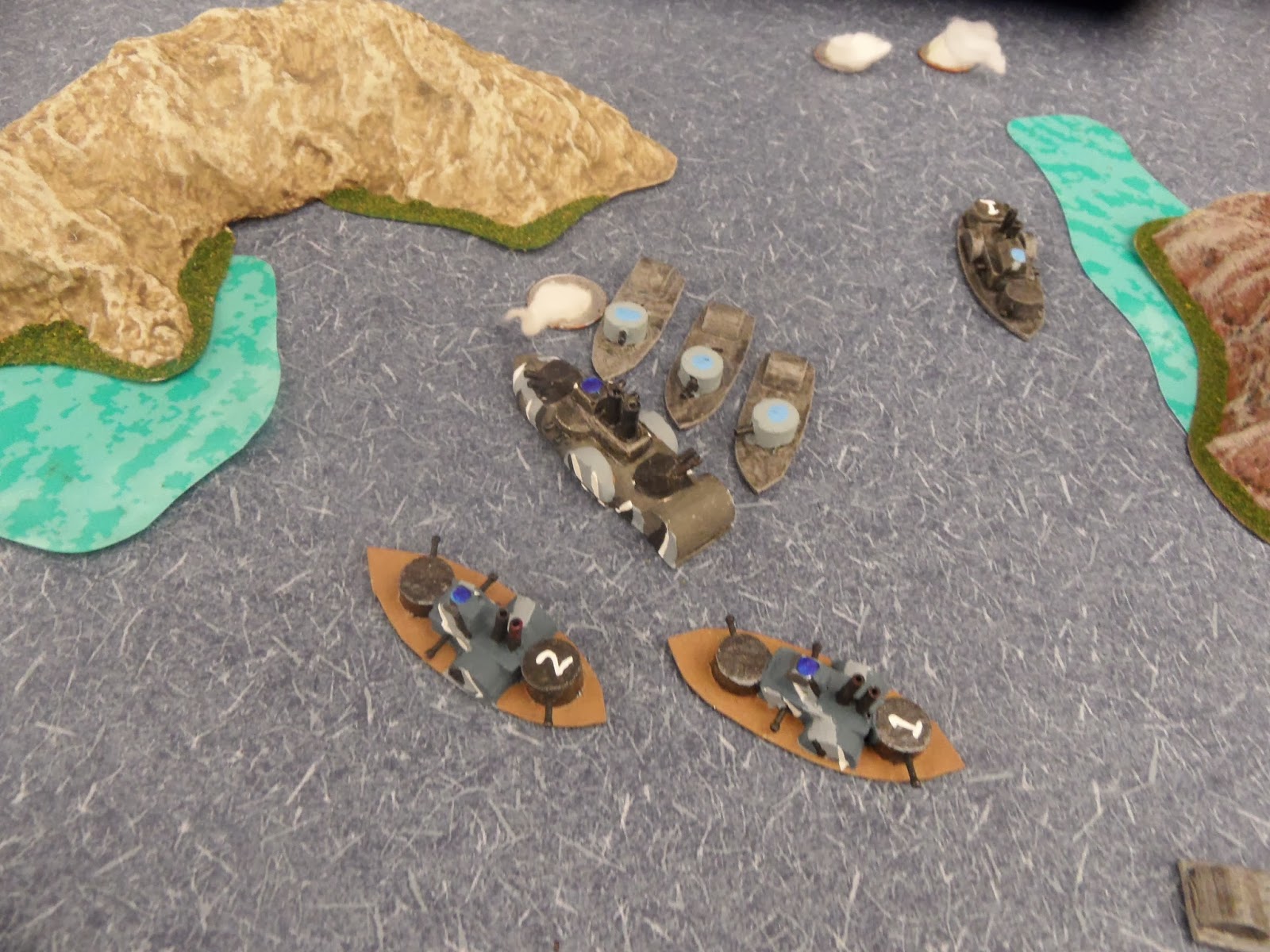 the monitors bravely sacrificed themselves to take down the dreadnought
but the next turned suffered extermination at the hands of the battleships
I have to thank Doug for a great game, great rules and delightful scratch-built models as well as a jovial and patient game-master made this a real treat!
﻿
Posted by Anton Ryzbak at 12:48 AM