Leipzig, Action in the East, Updated

Again, more photos for which I have little explanation, but they are very pretty. I rely on the respective commanders to provide their (unbiased, ahem!) versions of events. Some of these are duplicates of the action in the center because the photos overlap.

I have now added the Housemartin's (clearly unbiased and nonopinionated) notes to the photos. 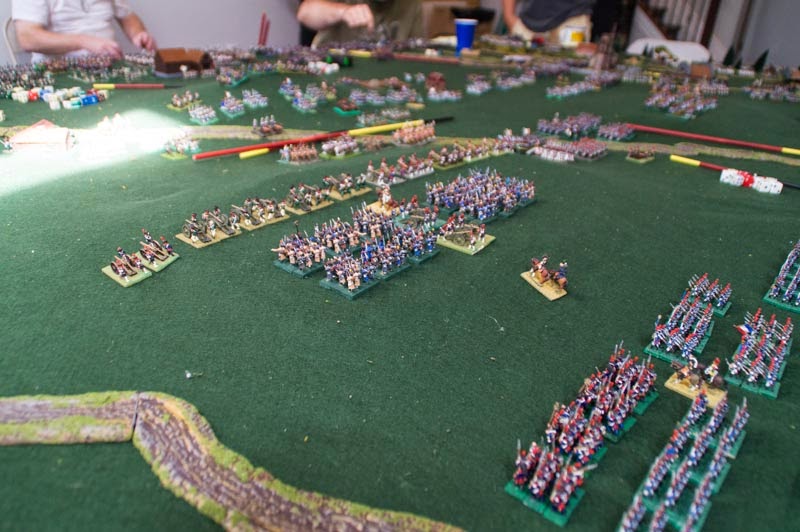 Young and Middle Guard on the hill at the center of the Battlefield
with their artillery positioned in front of the battalions. 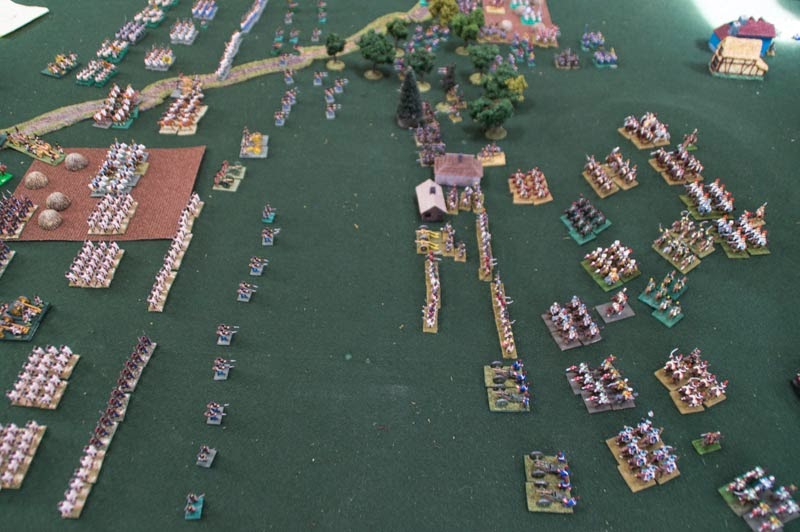 Overall on the extreme East at the start of the day.
MacDonald's Corps (Italians/ Neapolitans/Germans/French)
backed by a mixed cavalry corps (1 division of cuirass and dragoons, 1 division of lights)
vs
an Austrian Infantry Korps (20 battalions of infantry)
supported by 4 regiments of cavalry (3 Kuirass and 1 Chevauxleger) 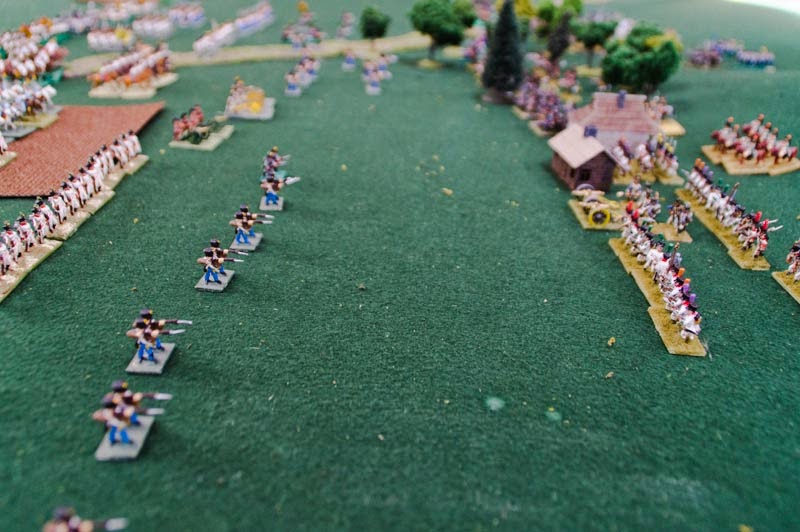 Close up of the start positions, Austrians on left. 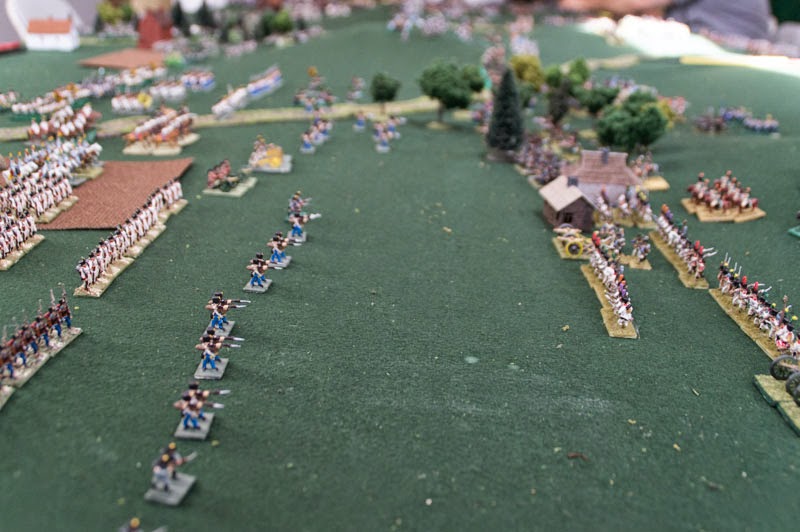 another close up of the start positions, Austrians on left. 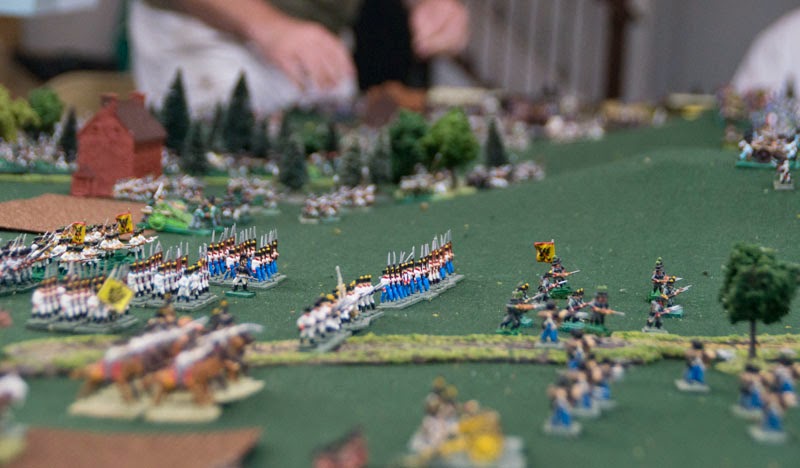 The first Austrian Infantry Division marches into the "Woods of Doom" (Austrian doom anyway as over the battle seven Ausrian Battalions will enter the woods and all will be broken and driven out in rout) led by a battalion of Jagers and a battalion of Grenzers.

The first Austrian Infantry Division marches into the "Woods of Doom" (Austrian doom anyway as over the battle seven Ausrian Battalions will enter the woods and all will be broken and driven out in rout) led by a battalion of Jagers and a battalion of Grenzers. 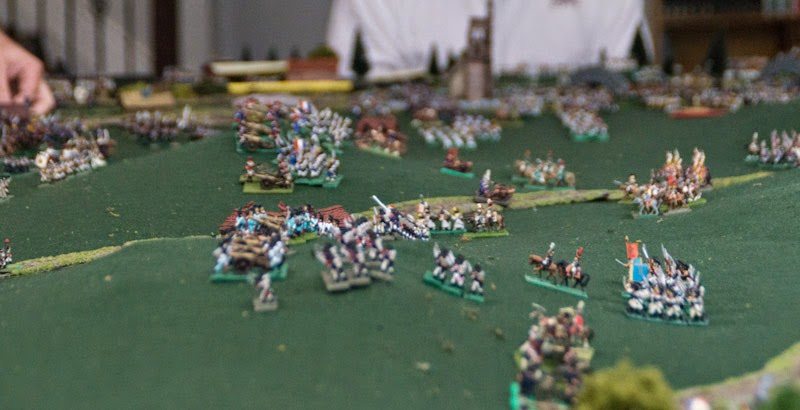 A distant shot showing the Germans (Hessians and Baden) Holding a Hill to cover MacDonald's right flank. This hill was in front of the Hill that the guard started out on in the first picture. 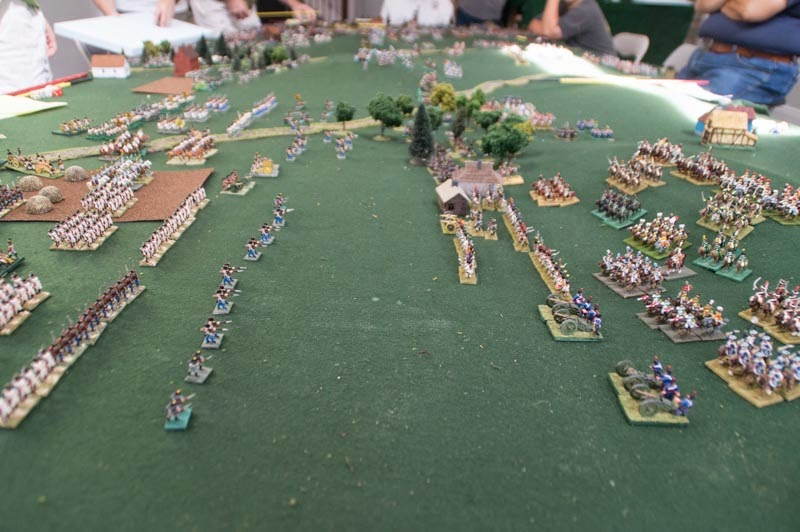 This picture is from early on in the battle when I shifted my cavalry corps to the left to threaten the Austrian second Infantry division (not the one going into the "Woods of Doom"). 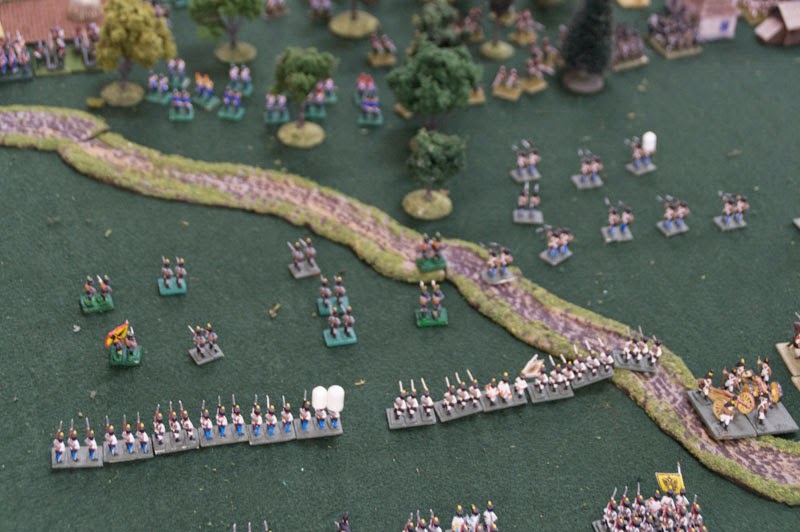 The basic Austrian problem is shown in this picture. The Austrian Jagers are being blasted out of existence and the lines behind are starting to suffer on their approach to the "Woods of Doom". Meanwhile my scads of light infantry (13 battalions in the corps) snuggly and safely skirmish from the edge of the "Woods of Doom". 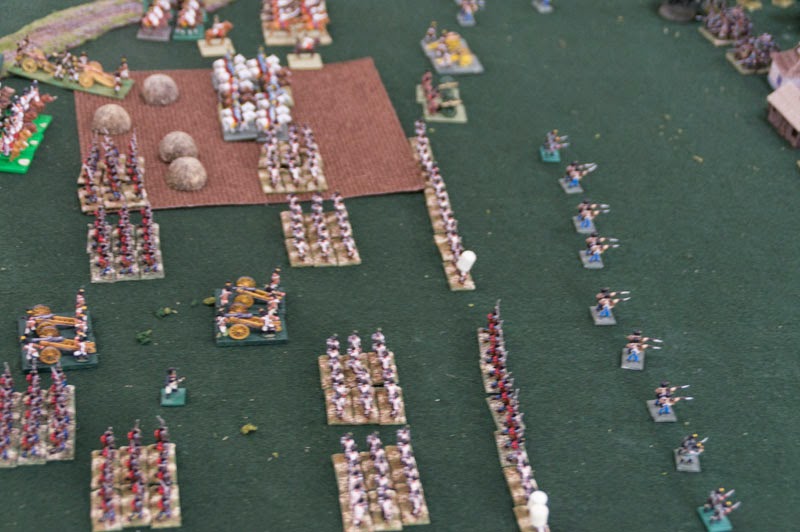 As Garrie shifted half of his cavalry (2 regiments, but like everything Austrian they were twice the size of my regiments) to his left to support his wavering infantry division, I shifted my heavy cavalry division (8 regiments) to my right to turn his left flank (not in the picture). 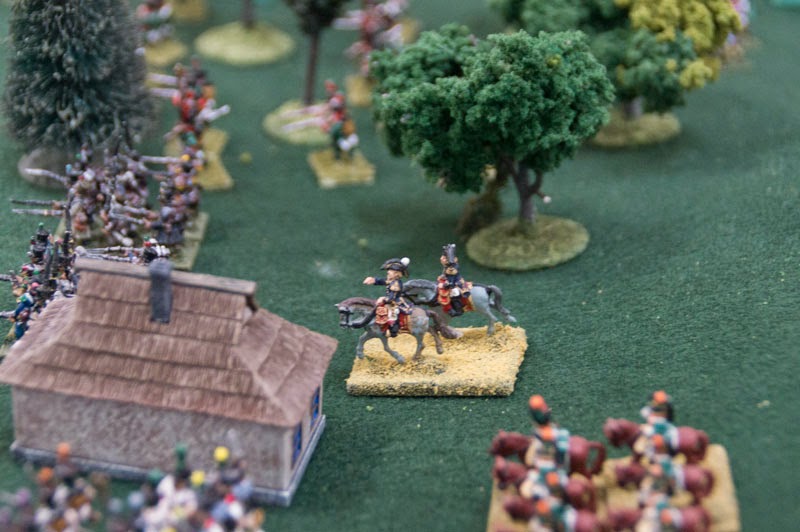 Italian Divisional general Lecchi confidently monitoring developments between the village and the "Woods of Doom". 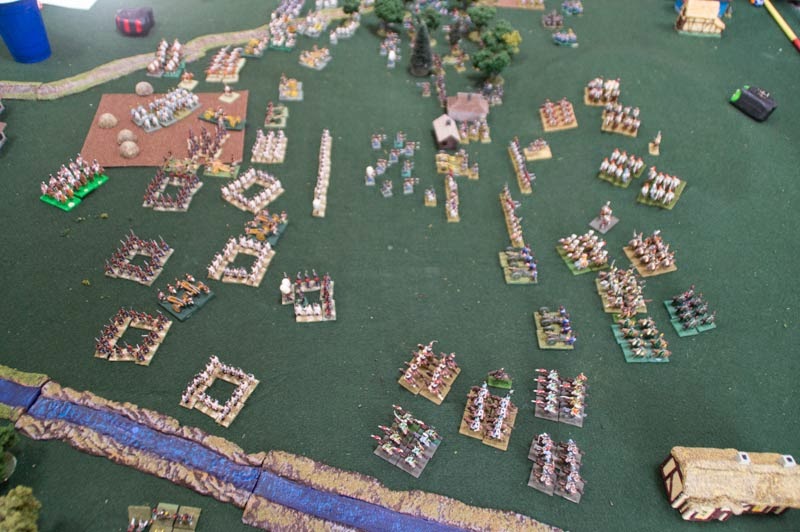 Top right my cuirass in process of shifting right. Bottom center my light cavalry division is threatening Garrie's 2nd Infantry Division forcing it into square and its gunners off their guns. At the same time my guns begin a withering fire on the Austrian squares (I never rolled well, but turn after the turn the casualties mounted). Top center of the picture shows the Austrian First division's broken units clogging are space behind the woods (from my perspective) because too many units were being routed out of the woods for the limited Austrian officer Korps to rectify the morale problems. 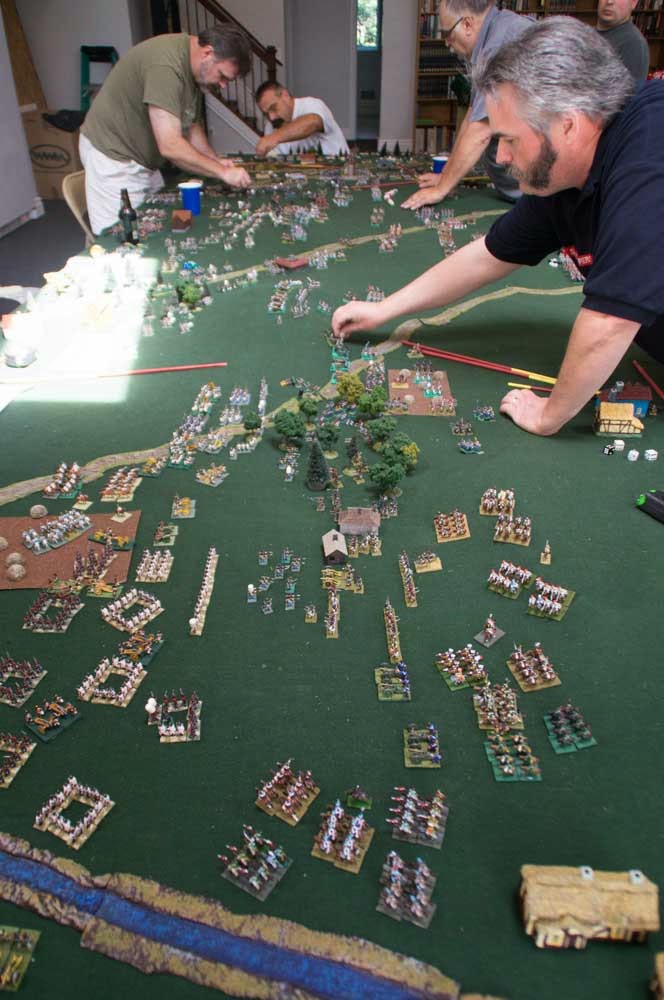 A picture of me bringing up some more guns from the corps reserve to intensify the hammering on the Austrian clump of routed troops. 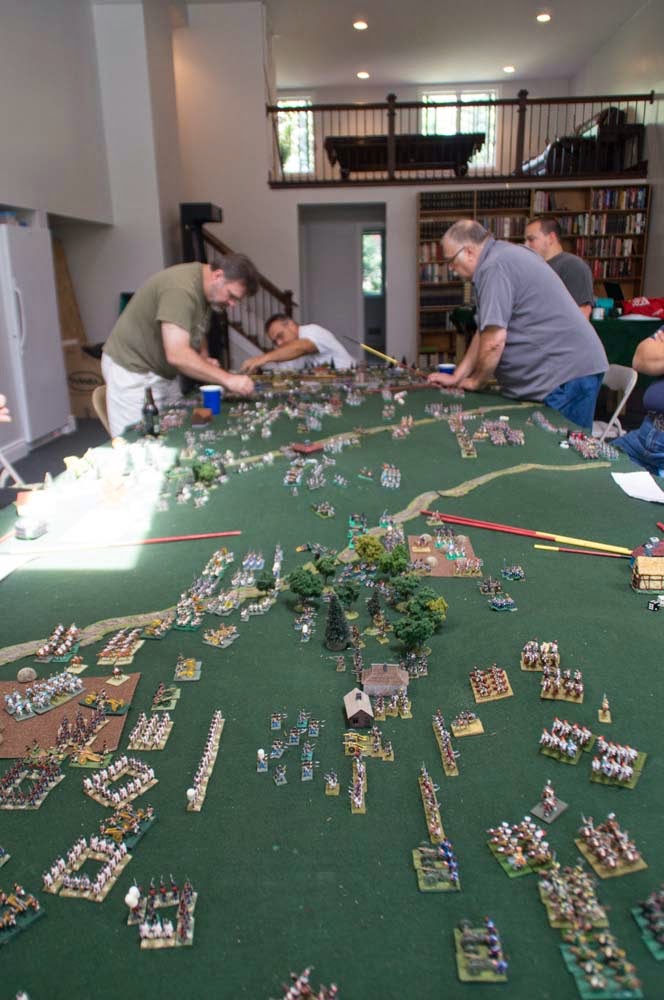 a long view of the entire battle about 2/3 of the way through from my end (the East side). 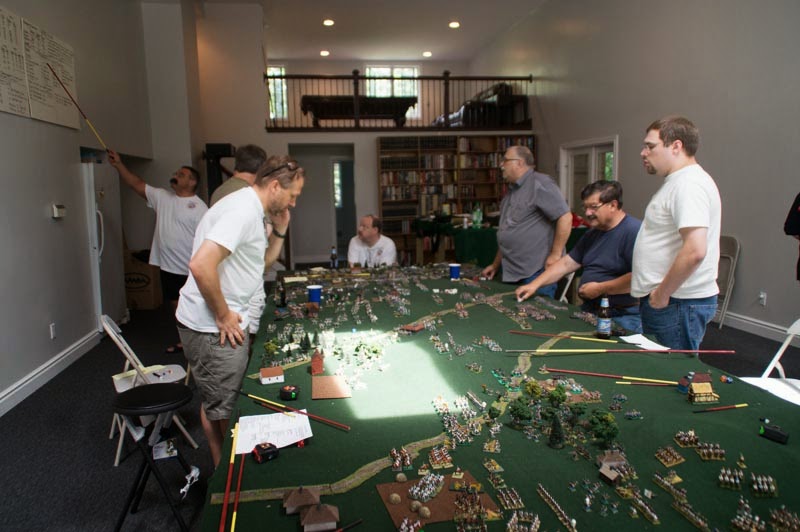 another long viewsof the entire battle about 2/3 of the way through from my end (the East side). 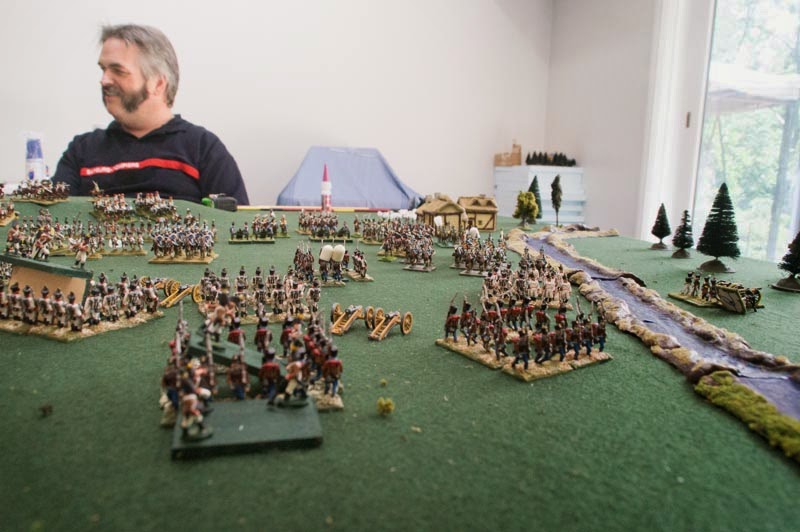 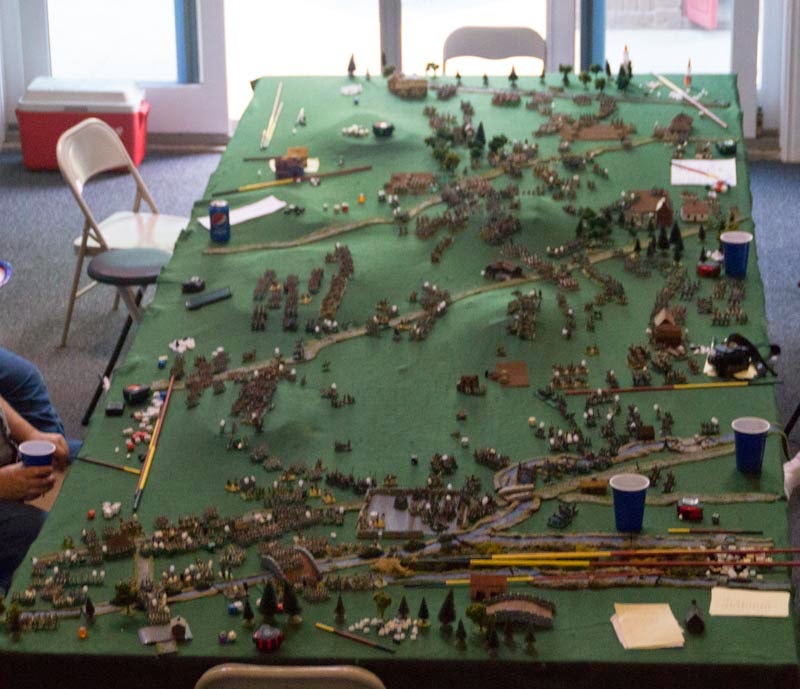 Long view from the opposite (West) end of the battle. I do not know why it is here.
(ed note: Context, my boy, context) 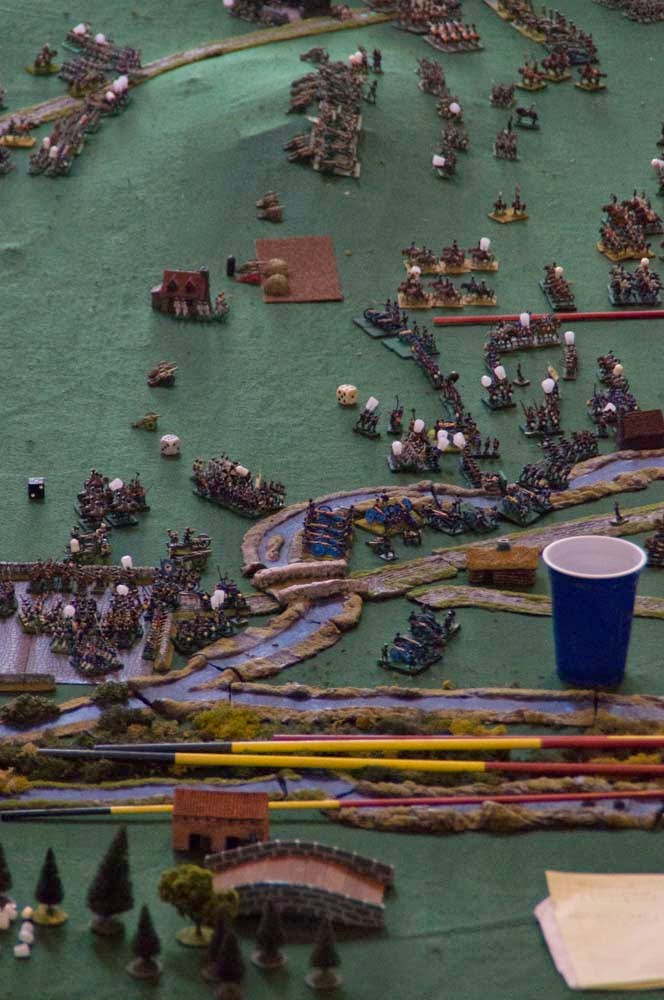 Close up view of the West end of the table. Again I do not know why it is here.
(ed note, this one is operator error) 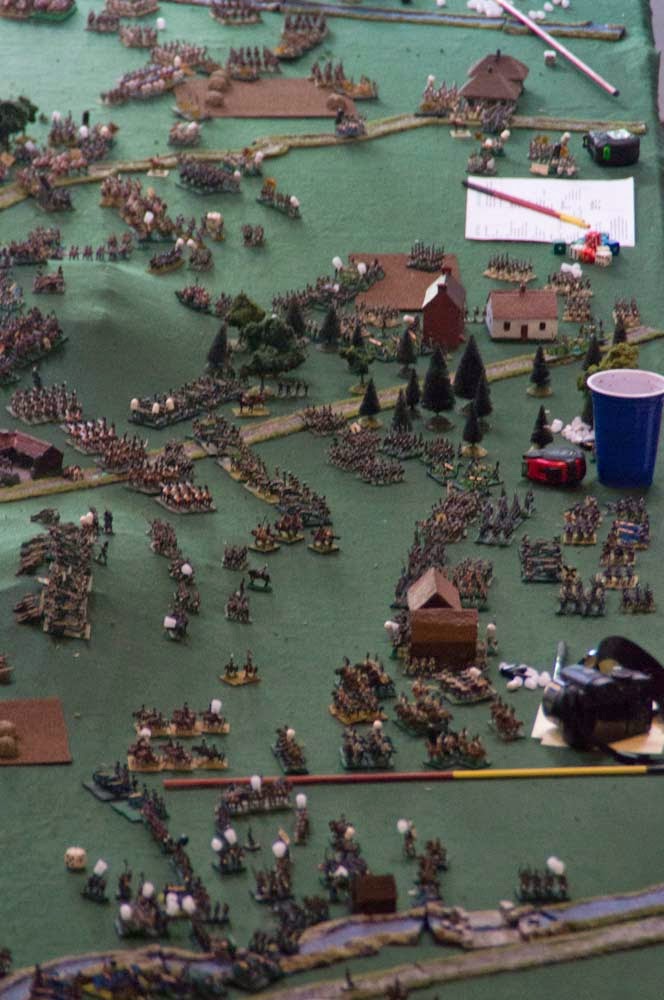 Another long view from the West end of the table. I still do not know why this is here.
(pleading context again, I guess) 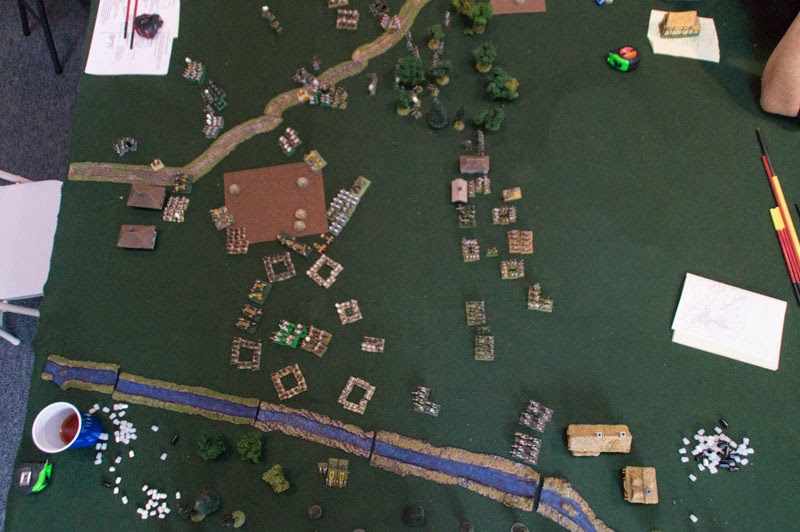 A Beautiful overhead picture at the end of the battle on the far East end. I believe Garrie took this, but I could be mistaken. Garrie's first Division has completely routed off the field (or been exterminated) along with half his cavalry. The second Infantry Division has lost all of its light infantry and a battalion of line infantry. The remaining six battalions are caught in square at the bottom center of the picture. One is about to break, another is being weakened, the last four are untouched. Garrie's third regiment of cavalry is being ridden off the table in the middle of the six squares by one of my light cavalry regiments and his last regiment is formed up in the center of the picture and threatening my infantry by the village to the right (thus they are in square). All of the troops from the woods to the left edge if the table are mine moving in to complete the surrounding and destruction of the remaining Austrians. However, all was for naught as our inability to clear the bridges on the western edge of the battle meant that the whole army was cut off from France. An Ahistorical arrival of the Swedes to my left also undercut my ability to complete the destruction of the Austrians. Well, at least I had opened a road for my corps to escape through.
﻿
Posted by Anton Ryzbak at 11:51 AM