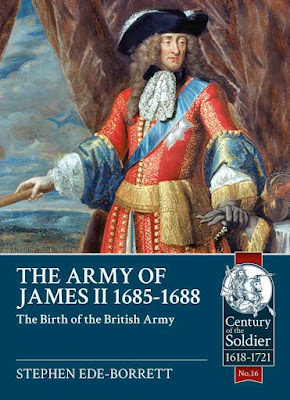 Way back in 1987 I bought a copy of this title's predecessor; it was a laboriously type-written fifty-some page softbound book that displayed all of the primitive standards of the wargames publishing industry of the era. What shone through the crude material presentation was the immense amount of data gathered on what, at that time, was an incredibly unlikely subject. The energy and passion that Ede-Borrett has lavished on this subject was evident on every page.


Time has passed, Mr Ede-Borret has clearly continued his in-depth investigation of this formative period of the British army and Helion has given him to opportunity to present the fruits of his labors to the world at large. I must say it has been well worth the wait. In just over 200 pages, supported by a cornucopia of charts and diagrams and illustrated with a host photographs of paintings and period-pieces in museums, contemporary engravings and prints, as well as original artwork Mr Ede-Borrett unravels the complicated evolution of the British Army. In a period when record-keeping was hit or miss (often deliberately!) he has pored through the available documentation to tease out the strength and organization of the army as it was transformed from its feudal roots into a "modern" standing army. The diligence and passion that was so evident in the original is even more evident in this work. This certainly sets the standard for this subject.
Not a book to be taken in hand for a leisurely read, this volume is so densely packed with data that it should be considered a reference. In reading it one sees the struggle that James II had in creating a professional army in a country that was rabidly opposed to such an idea. Funding, recruiting, equipping, organizing and training are all covered (down to the pay-rate of the individual troopers). The dizzying array of colonels that raised the units is tracked (units in the British army of the period were not given numbers or regional names but referred to by the current Colonel's name) as are the recurrent changes in uniform. The text is made much easier to read as the masses of data are organized into convenient charts.
James II army was destined to fight only one battle (Sedgemoor) before it was traitorously turned over to Dutch William by none other than one of its commanding officers, John Churchill. The volume provides an organization for the army during the Sedgemoor campaign but does not go into the battle at any length.
Uniforms, standards and organization of both Foot and Horse are given a close examination as is the embryonic Artillery. The level of detail is amazing; down to the 12,600 tent-pins that the Ordinance Office supplied to the army. This volume gives a real insight into what it took to organize and equip even a small army such as James envisioned. One can only imagine the work entailed in putting Louis XIV's 200,000 man army into the field!
This book is a tour de force treatment of the birth of the British army and is an absolute "must have" for anyone interested in the inner workings of the establishment of that legendary force.

Very Highly Recommended
Posted by Anton Ryzbak at 12:38 AM