The point of owning and painting wargames minis is to actually play games with them, at that is what I have been told! The growing pile of Lace Wars figures had me thinking that I would like to see them in action on the table top, not just a staged photo-op, but a real game. So I concocted the following scenario.

On the Island of Santa Margarita the Spanish have begun to construct a gun battery on a bit of high ground that overlooks the Straits. They have been concerned over the increasing tensions with Britain and want to secure the passage against interference by the Anglos. Right near the proposed battery is the homer od Senor Fernandez, the leader of the local militia. He has called them to his home to assist with the construction work and to guard the area while the battery is built.

Having better and faster ships the British have found out that war has broken out against Spain. The salient problem is that while word has arrived, reinforcements have not. Lord Feversham understands the need to capture the battery position and spike or carry away the guns but he lacks the manpower for the job. To make up numbers he has struck a bargain with the devil and signed on a large number of Buccaneers to at as shock troops. They have been promised a free hand in looting the island as long as the battery is wiped out first.

The British player was given the choice of flanking attacks from the north or the south, or an attempt to land directly onto the dock with the one schooner light enough to handle the shallow water. He chose to launch all of his units into a flank attack from the south with the schooner sailing toward the dock as a distraction and a signal to his own men to begin the assault. Below we have a map to the table 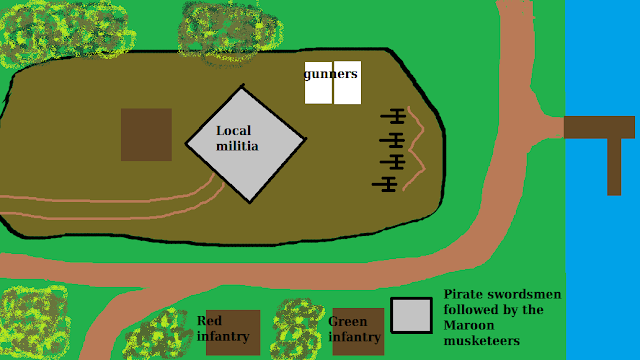 Before I continue with the After Action Report I will make some notes on the rules. Each commander is given a hand of standard playing cards that had two more cards than he has active units in his force. Black cards are movement, red cards shooting, face cards allow movement or shooting Aces and jokers allow movement and shooting plus a "cinematic" event, with the added proviso that when the Joker card is activated the turn is over and all remaining cards are removed.. The commander place a card by each unit (face down at first) after all cards have been placed they are flipped over. Play proceeds in the order of the cards from Joker down to deuces, if there is a tie the highest suit gets to choose if they wish to go first or to hold. In all cases a higher card may hold its action and then activate later, effectively interrupting another cards action.

Spanish,
A unit of twelve gunners with four cannon (asleep in their tents)
One unit of local militia, 24 figures strong, stationed in the hacienda, with pickets out on
guard duty scattered around the table
Three units of line infantry, 24 strong stationed off table but "nearby"

British;
A unit of 18 Pirate swordsmen
A unit of 24 Maroon musketeers
Two units of line infantry, each 24 figures strong
One sloop capable of carrying 24 figures

The commanders were dealt their first hand of cards with a joker among the cards that the British commander got. He chose to use this to bring on the Pirate swordsmen (see map) the cinematic effect he chose was to silently dispatch the lonely guard in the small house near his point of entry. 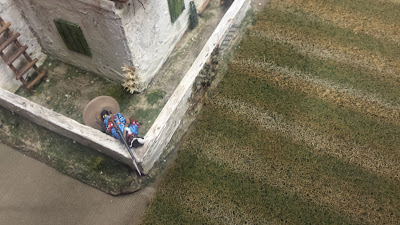 I guess that is why they call them "cut-throats"


The pirates silently swept past the dying guard and made it to the foot of the hill. Here the turn ended due the the Joker having been played.

The next hand found the Spanish in possession of the Joker. They held its action until play had advanced a bit and provided more targets. Then the Spanish activated it and the cinematic action was for a sharp-eared sentry to hear the musket of his unfortunate friend fall to the ground, shots were fired into the dark waking the other soldiers. mother round of play saw the pirate Swordsmen sweeping up the hill and pushing back the very stalwart Spanish gunners as the Maroon musketeers fired at the main house enthusiastically if not effectively. At the same time the greens had opened fire on some of the militia attempting to form up outside the hacienda , wiping them out and the red infantry had deployed to block the approaching reinforcements. 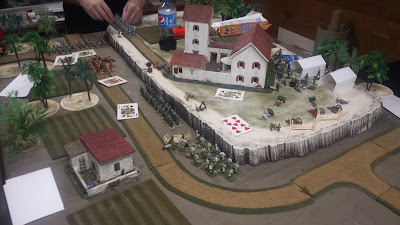 we tend to let the table get a little "busy" during games,
but you can see the cards deployed next to the units

This is where the card sequencing came in to ruin the Britisher's day. A string of lucky card draws gave the Spanish the opportunity to fire first in several key engagements. Fire effects are put into action as the card is played so a unit that took casualties  from another unit that fired on a King only returns fire with its surviving members when it replies later in the sequence. Combined with some good dice rolling this served to swing the tide of events. 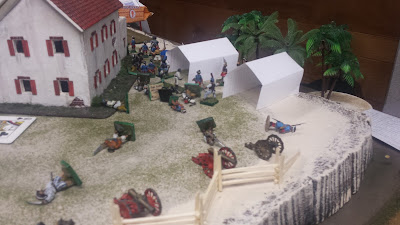 the gunners fought like devils against the Swordwmen but were gradually driven back,
the pirates lost many men to sniping from the hacienda 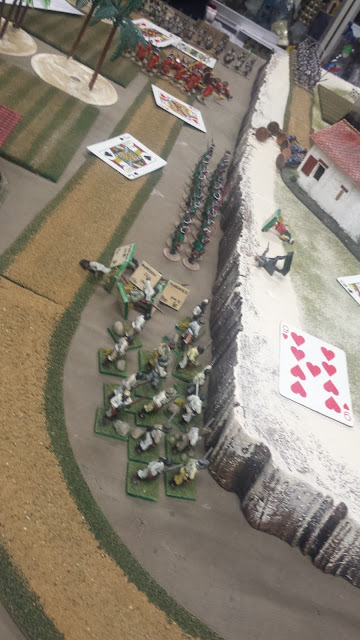 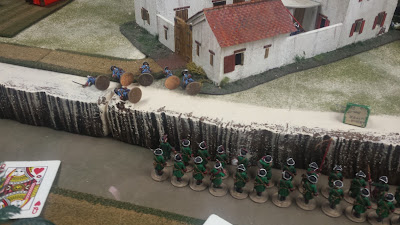 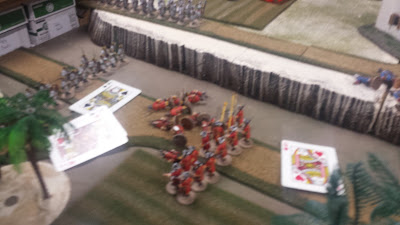 neither did the red infantry,
facing off against another regular unit but firing second,
and getting flanked on their right 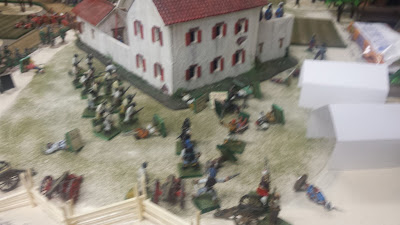 frustrated the Maroons closed to point blank range
and began firing directly through the windows,
this helped, but not enough 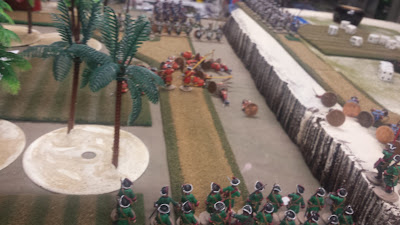 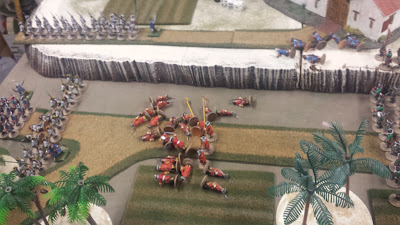 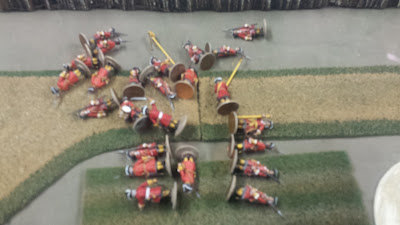 thier bravery will long be remembered 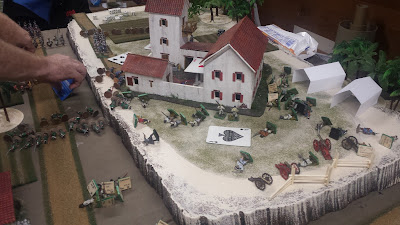 as the green infantry battled the odds and dice
the pirates suddenly remembered that they were here to spike the cannon,
not kill the gunners and turned toward that task
covered by the fire of the much-diminished Maroon musketeers 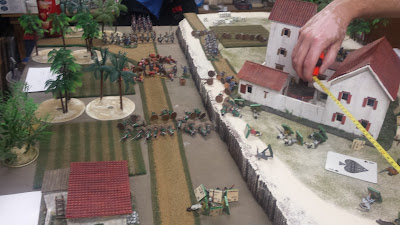 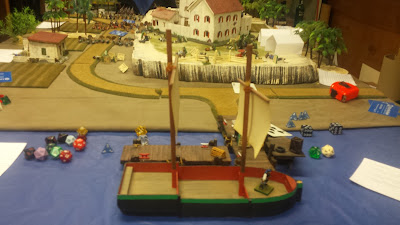 in the end, only one pirate made good his escape 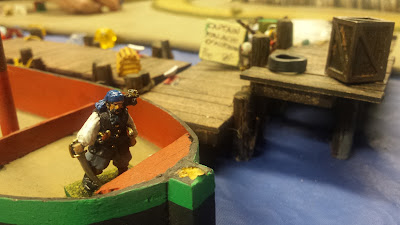