Now on to the Three story buildings.


These are the last of the Timber framed set and I will be reviewing two three story buildings, a 'single' and a 'duplex'. 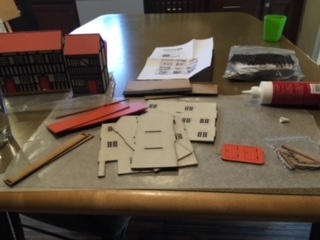 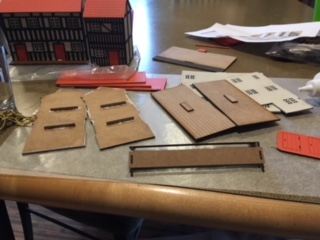 The first three steps are shown here.  Assembling the roof substructure in the foreground.  Gluing the floor supports into the side walls.  Finally the directions tell you to glue the wooden tabs onto the removable floors.  However, this last step had already been done.  Also the directions showed that there should be two separate pieces that make up the third floor, but the floor came as one single piece. 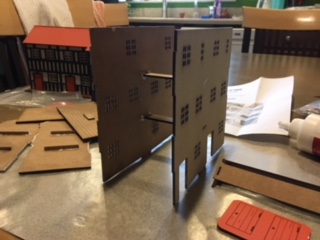 Next, the directions said to glue in these two spacers and then glue on the building sides.  After I glued in the spacers I discovered that the spacers held the walls too far apart and the sides would not come together.  Eventually I decided to remove the spacers and proceed.  Once the spacers were out I was able to get the walls assembled. 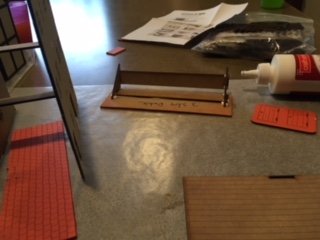 Before I discovered the walls issues I decided to start gluing the real roof on the subroof. 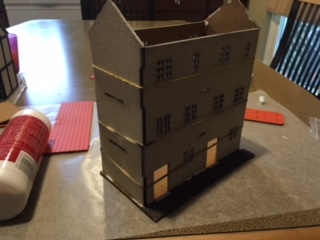 Here is the completed building with the rubber bands trying to hold things together. 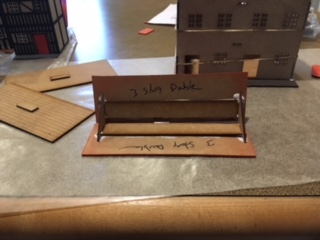 While awaiting the glue's drying I decided to move back to the roof.  Unfortunately the roof panels were bent so there was difficulty getting everything settled in to place. 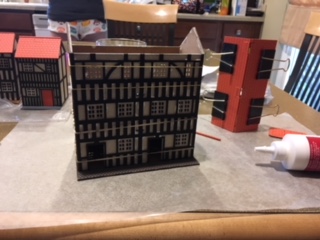 By this point I have added the timber framing and set the rubber bands back on for drying.  Meanwhile the roof would not set up properly due to crooked roofing.  I decided to bring out some old friends of mine, some binder clips.  These are very inexpensive and will hold things together well.  I have used them in kit construction before and even built full sized items like shields using these.  In the rear you can see four of the clips locking the roof in place.  This resulted in the matter of the roof being resolved. 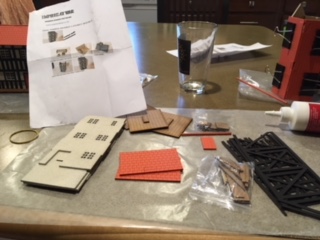 While the duplex dried I launched into the single building.  Here is the kit out bag. 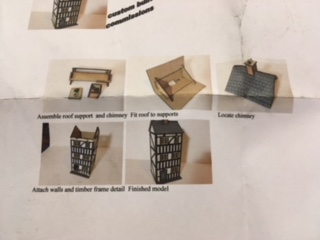 As you can see here this kit's directions leave something to be desired, like details.  Fortunately for me I had already built four of these buildings so I could get it done without real directions.  However, if this had been the first building I tried this could easily end up a mess. 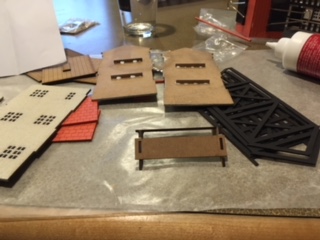 Here are the first two steps in this kit.  Assembling the sub roof and gluing in the removable floor supports. 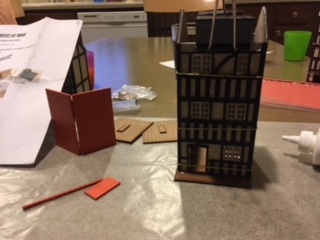 In this photo I have added the timber framing plus the rubber bands and started construction of the actual roof.  The timber framing left something to be desired as it was crooked in several place that I could not realign.  Furthermore, the framing would not line up with the basic walls properly.  The back side timber framing is off center. 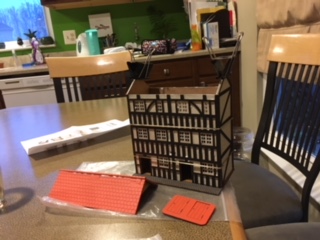 Here I have returned to the 'duplex.  The roof pole has been added. 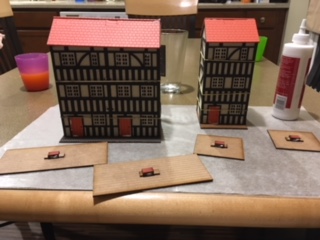 Finally, here are the finished buildings.  I have increased the height of the removal tabs on the  removable floors.  I do this because the size of these tabs are vey small and hard to get ahold of for removal during a game.  I have also glued the doors in place in both buildings.


Having completed all five of these now I have come to the determination that these buildings are not of as high a quality as the Spanish Italian buildings I reviewed previously.  The gabled building is pretty close, the two story buildings are not as good and various problems like missing parts and poor directions creeped into the mix.  With these three story buildings the fit of the buildings was terrible.  The models did not hold together during assembly well, even with rubber bands and the timber framing appliques, while completely cut, are miss cut.  Once the buildings are completed and the glue sets up they are serviceable  war gaming scenery, but not simply outstanding like the Spanish Italian range.


I am hoping that the Spanish buildings I plan to convert o shops arrive shortly as I would like to build them next.  My final build will be the Amphitheater, but that will have to wait until my vacation.

Posted by The Housemartin at 11:49 PM