The good people that host Spartacon each year were kind enough to allow me to run a game using my 28mm Victorian Science Fiction Pre-Dreadnoughts. The Lansing Center where SpartaCon is hosted has a very generous-sized room. This allowed me to run my 28mm Pre-Dreadnought game at the convention in a much larger space than even the dance studio had permitted. The scenario for this action was an all-out fleet engagement, a fight to the finish if you would.

I ran this game differently than most other naval games, the effect of fire was known only to the ship Captain of the vessel that was fired upon. The opposing captain was only told that his shells missed or that strikes were seen on the target vessel. Other players had to surmise what was going on by the appearance of splash markers on the playing surface.Players had to write movement orders in advance and the gamemasters moved the models (many thanks to J&R for his assistance in this matter). This kept an air of suspense as no player was certain of the results of his fire. 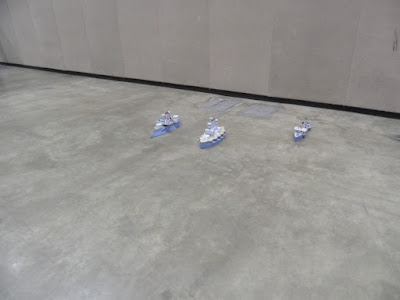 The French fleet: the Dupuy de Lome, the Charles Martel and the Nemesis (left to right). 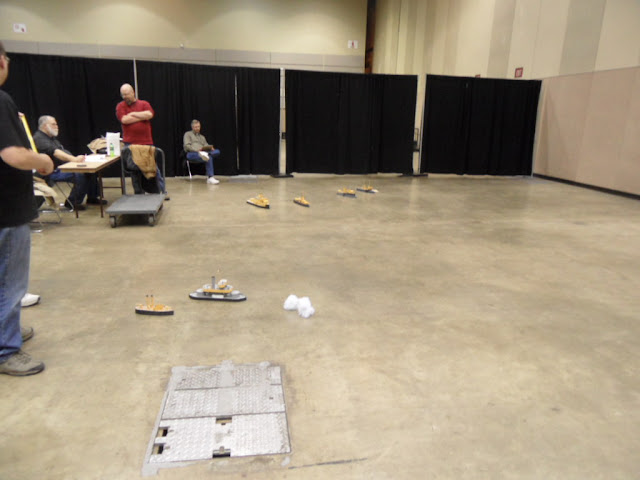 The numerically larger, but rather more old-fashioned, German Fleet:
the Panther and the Thor (the colonial squadron) in the foreground,
the Seydlitz, the Blitz, the Gneisenau and the Donner in the distance, once again left to right. 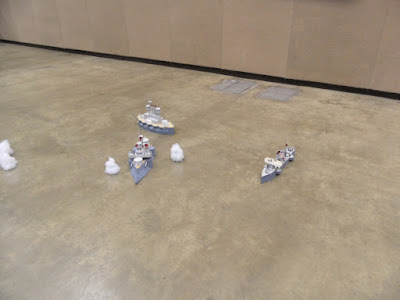 The opening salvoes missed the French... 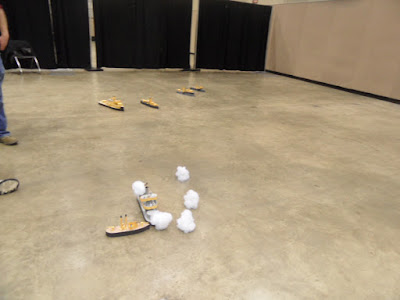 ...and the Germans as well. Disasteriously a piloting error
very nearly caused an accidental collision in the first move. 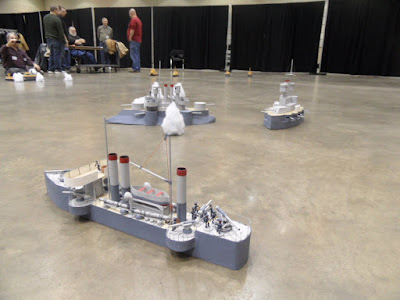 The French were not immune to steering issues and almost collided as well, with the de Lome and the Martel passing at hailing distance. We heard the exchange but alas it was in French and we could not make out what was said, it sounded angry! First blood went to the Germans with a strike on the deLome that caused inconsequential damage. 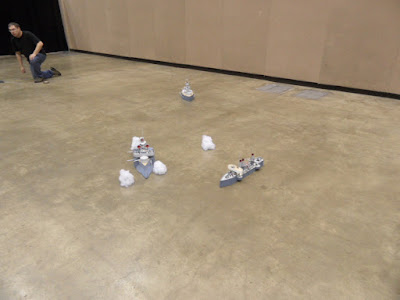 The Martel sailed off to engage the main German force
while the deLome and the Nemesis eliminated the Thor and Panther. 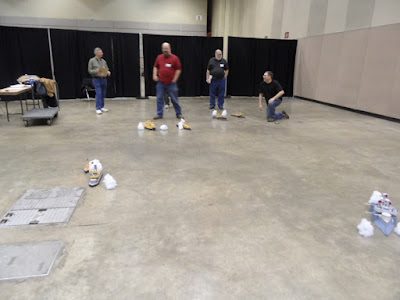 The plucky Colonial Squadron sailed majestically (or, more accurately, slowly) into the teeth of the French fire, assisted by some lucky die-rolling they avoided too much damage and continued to close. 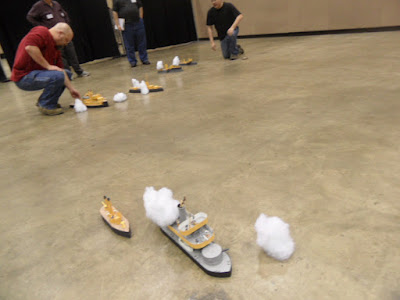 The Thor became a shell-magnet, her old but sturdy hull absorbing round after round
of French fire the rest of the German force took fire from the Martel. 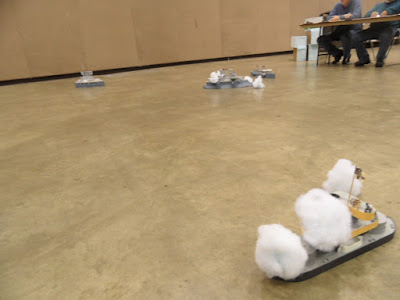 The Thor returned fire against the deLome, however, causing a surprising amount of damage. 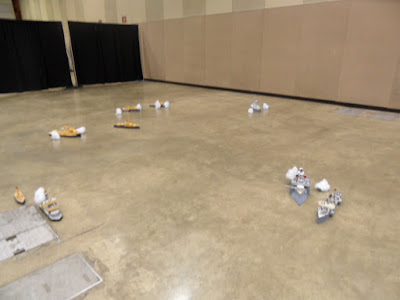 The Martel continued it's lop-sided fight with the rest of the German force,
spreading its fire amongst the opposing ships. The Nemesis moved past the de Lome
and added its significant firepower to the torrent aimed at the Thor. 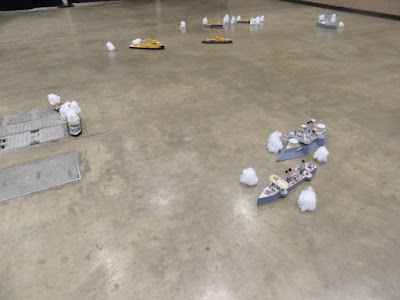 This tirade of fire began to take a toll on the Thor. Her hull was shot to ribbons but
all of her guns continued to fire. Some fire finally began to fall on the Panther,
and in the distance you shall observe that the Martel has recognized the threat
posed by the Donner's torpedoes and has opened a concentrated fire against her.
This caused significant damage but was too late to stop the Donner from launching. 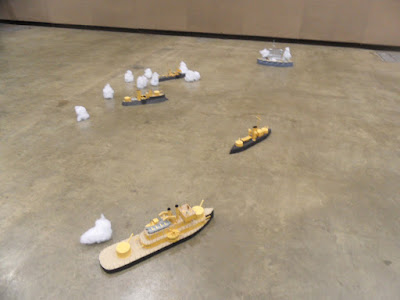 The weak firepower of the German ships was having trouble hurting the solidly built Martel,
but the dreaded torpedoes took a fearsome toll. In return, the Donner and the Gniesenau
took a terrible beating from the French guns, but fearlessly continued to close. 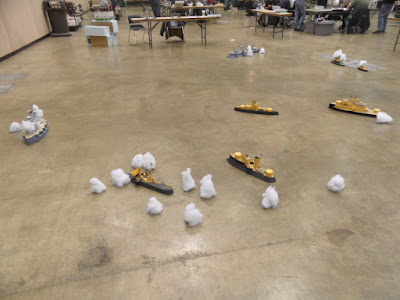 The Martel's fire savaged the approaching Germans as the deLome
and the Nemesis continued to club the Thor and Panther into submission. 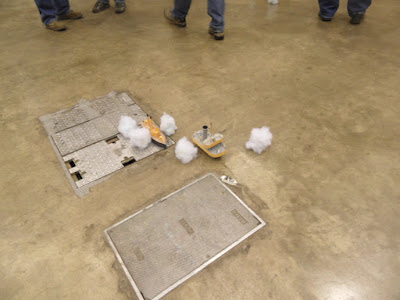 Lashed by gunfire and torpedo strikes, the Thor eventually slipped beneath the waves, but not before the Captain had led the remaining crew to the launch to form a boarding party. 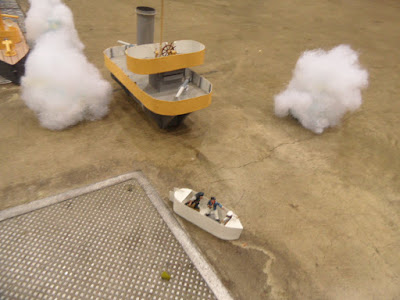 Exhorted by their indomitable Captain the Germans rowed on... 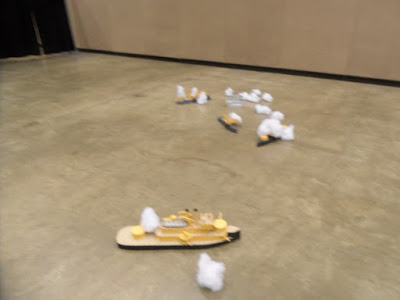 ... while at the other end of the area a similar drama played out with the roles reversed. 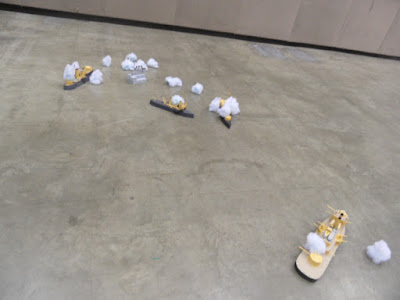 Pummeled by gunfire and lanced through with many torpedoes the
Martel went down, she had faced and fought most of the German fleet,
but there was no way she could defend herself from attack on four different axes. 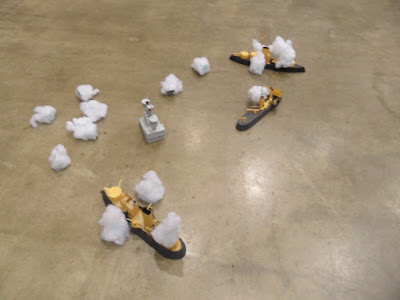 True to the brave (if unlucky) French tradition she went down flags flying
and guns blazing, having sorely wounded all of her attackers.


I would again like to thank the good people that run Spartacon for giving up a simply HUGE area of floor space to let me play with my toy boats. I hope that my brave captains enjoyed the game.
Posted by Anton Ryzbak at 12:13 AM