I attended the Pro Or Con convention today and was very much pleased by the change of venue. The hall was large and well-lit with plenty of space between the tables and lots of room for vendors and rummage sale space. I tried out two games; Sharpe Practice Two and Tanks! 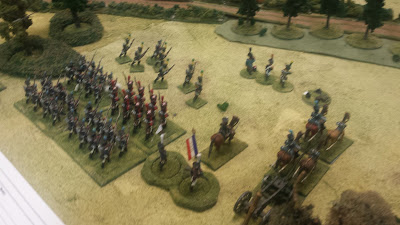 the game used the old 25mm Minifigs, I have always loved the clean
simple lines of the old Minifigs range, and these were very well painted to boot!

Sharp Practice was very well presented and was a lovely game to look at. The rules themselves seemed to fall between two stools; not detailed and granular enough to be a proper skirmish and yet too fiddly for a larger game at the brigade or division level. Most of the other players seemed to be enjoying themselves so maybe it is just a problem I had. 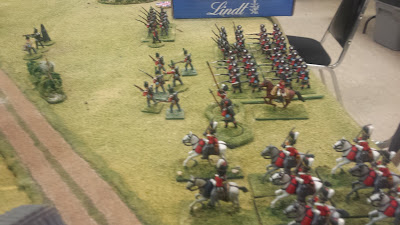 nobody has equaled the Minifigs mounted figures to my eye 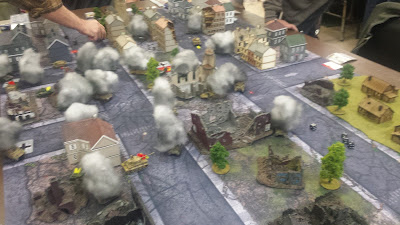 late in the game, smoke rises from burning wrecks in every quarter of the city
as tanks blaze away at each other like mad

Tanks! on the other hand, was a low-density bit of fun. The rules are simple enough and the information is presented to the player on a unit-specific card that allowed us to be running the game with only guidance from the gamemaster after just the first couple of turns. Be Warned! This is no game for rivet-counters and such, generalizations abound and some pretty broad assumptions are in play. Similar in approach to the Star Wars minis game the system looks to widely adaptable to other fronts and periods. This is certainly something that I will be looking into for further amusement and rules tinkering. Our scenario was a slugfest between late war Germans and Russians that saw a great deal of maneuvering. The use of highly variable "Critical Hits Cards"  kept us guessing as to the effect of our shots through the game. 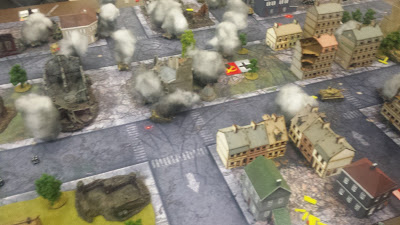 this was another "eye friendly" game, with excellent terrain,
beautifully painted models and nice effects

Overall I would have to give this show a big thumbs-up; a better venue, great games and hard-working and friendly staff made things go very well. I hope they continue in this manner and intend to be back for Battlefields.
Posted by Anton Ryzbak at 8:50 PM