Having shown you the terrain, and the Union's Cunning Plan, we will now begin to unfold how the game progressed. As always the Plan did not survive contact with the enemy.........but it at least provided a framework for action. The Fire & Fury Brigade level rules functioned very well, providing a fast playing game with its share of frustrating Command breakdowns and offering realistic results.

I played Mansfield, the narration is told from the Union viewpoint (mostly mine). J&R or R.U.P. please add the opposing narrative if you wish. 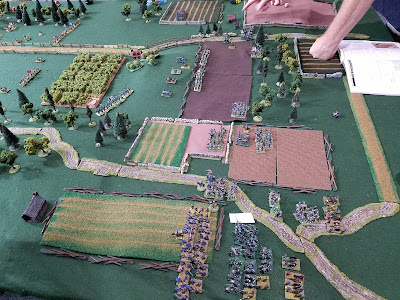 and the Cunning Plan runs into problems right away,
Mansfield's Corps is slowed by atrocious Command rolls right off the bat
moving at half speed instead of a stunning sudden assault 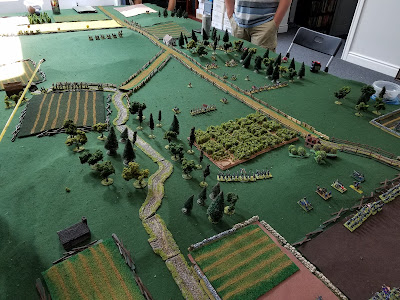 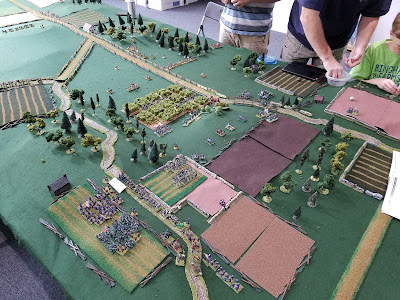 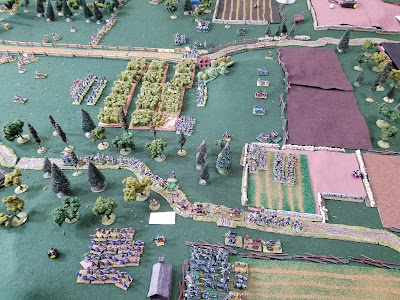 risking a repeat of the early demise of Mansfield I attached him to the lead brigade and he dragged  them forward, in the center Hooker's troops burst forth from the cornfield and slammed into the Confederate center, this was the beginning of an epic struggle 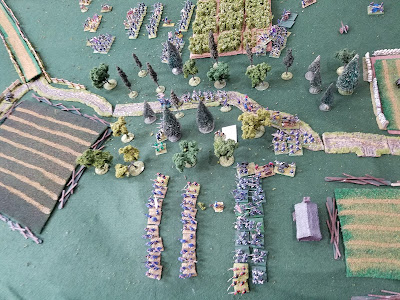 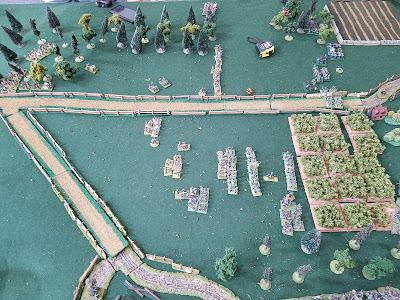 in the center Hooker's troops had cleared the cornfield and were busy assaulting the Rebel line, the small brigade in the center of the Confederate proved amazingly durable 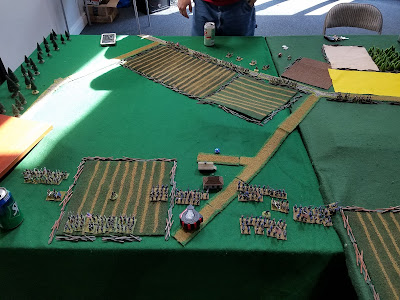 having grown weary of waiting for Mansfield to deliver the shattering blow in the center
Sumner began his attack, this reversed the original battle plan of stripping away the Confederate reserves before Sumner delivered the killing blow 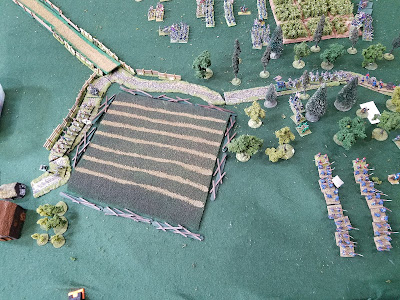 the target of Mansfield's exertions, a small Confederate brigade and two batteries,
calmly awaiting their fate, I had no clue how much trouble they were about to cause me 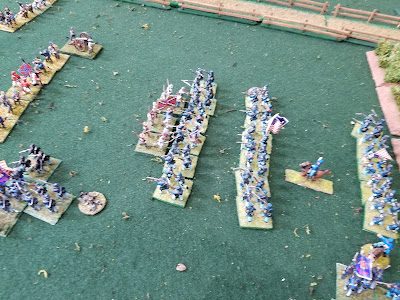 in the center the "unkillable" Confederate brigade refused to go away,
despite the attentions of most of a Union division 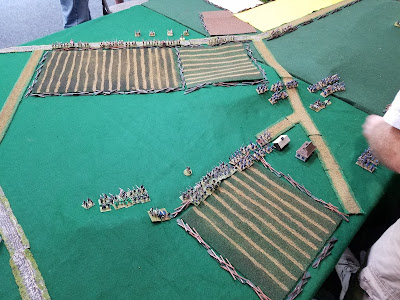 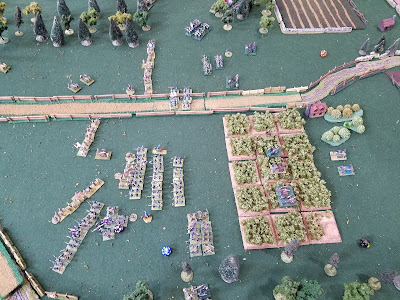 as the Union finally began to get the upper hand in the center
and bring the artillery through the cornfield...... 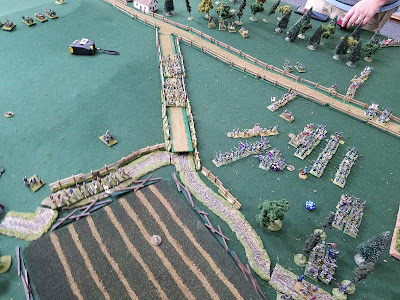 .....a division of hard-fighting Texans appeared from the Confederate reserves,
these fellows caused quite a few problems for the Cunning Plan 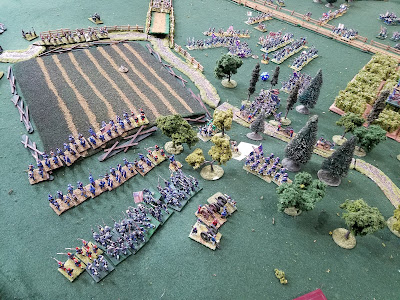 a series to horrid Command rolls, combined with the enthusiastic
attentions of the Rebel artillery, slowed Mansfield to a crawl 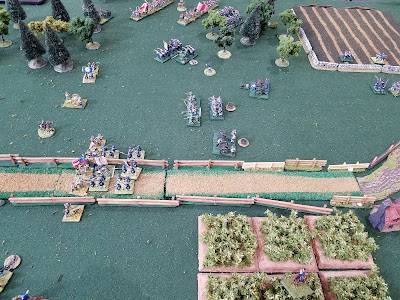 on the far right the Confederates were proving difficult to eject from the near edge of the West Woods, both sides began to run short on infantry and the artillery  took up the fight,
only to promptly go low on ammunition
(note the "empty ammo box" markers behind most Union  batteries) 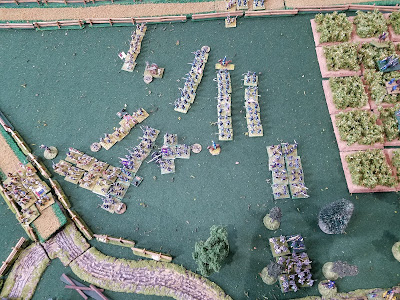 then the Texans crashed the party,
slamming into a Union brigade and sending it cascading to the rear 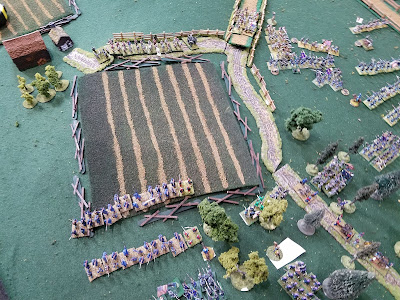 Mansfield continued to stand,
nailed to the ground by a complete collapse of his Command dice,
in the upper right you can see the other Texan brigade
coming to block Mansfield's  efforts in the woods 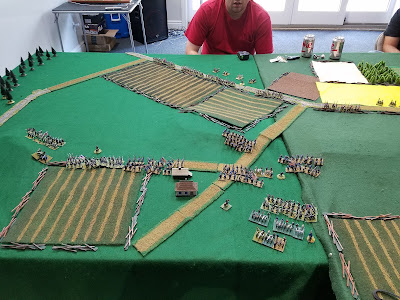 on the left, Sumner oozed forward in a deliberate manner
arranging his troops to crest the rise as a simultaneous event 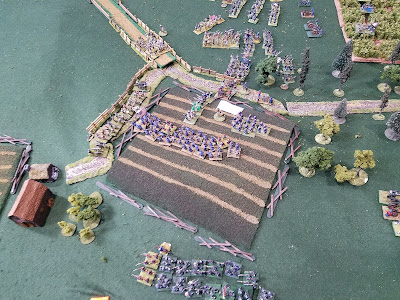 just in the nick of time Mansfield passed a series of Command rolls
and threw his entire Corps forward into the teeth of the Rebels guarding a snake-rail fence,
this began a fight that would mirror the bloody cornfield fight of the historic battle 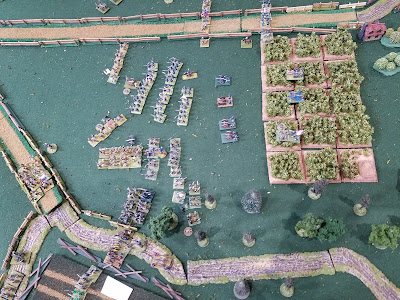 in the center (actually, just to the left of center in this photo) the Texans,
not satisfied with routing one Union brigade, tore into a fresh victim,
sending them flying as well


Thus ended the first phase of the battle, the Rebels hanging on for dear life and parsimoniously using their reserves, the Union clawing their way forward against  a tenacious Confederate defense. With all the available Union troops now in play the Confederate Commander could see the direction of the Northerners efforts, and dole out his reserves to thwart the Unions successes.
Posted by Anton Ryzbak at 3:06 PM