A Test of my Convention Game 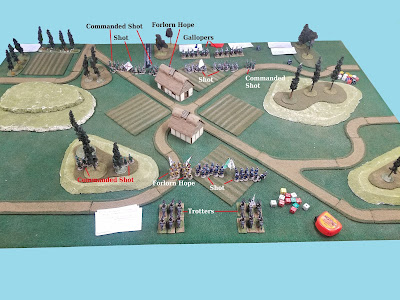 the table and troops

Joe dropped by and we took the opportunity to test out my game scenario that I was planning on using at the Convention on the 28th. The picture above shows the troops and the layout of the table that I am planning on using. I tried to give a good selection of troop types while remaining close to the sort of troops found in the early stages of the Nine Years War. 32 points per force provides plenty of troops for two players on each side. After due consideration of the terrain I conceived a Brilliant Plan, see below 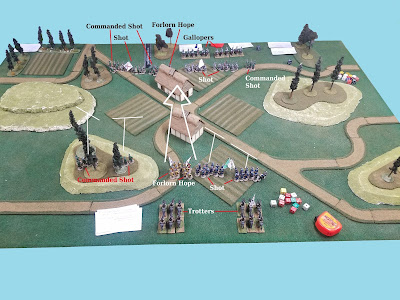 the Forlorn Hope (being totally B.A. troops) would smash their way into the farmstead and then be able to fire into flanks of the enemy troops while being safe from the powerful Gallopers
the skirmishers would make noise on the left
while the Shot advanced to flank the farmstead and provide a base of fire

The flaw in this plan was the assumption that Joe would calmly allow me to execute it without any urge to interfere. This proved to be a largely faulty assumption. 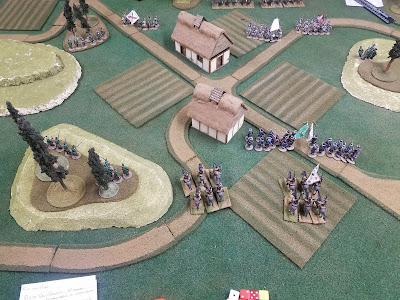 the first turn went fine (for once I actually moved all of my troops without failing a Command roll)
the Forlorn hope units made it into the first farm building, everything was looking good 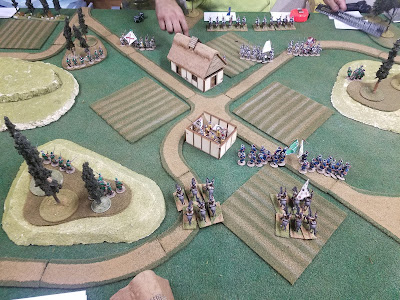 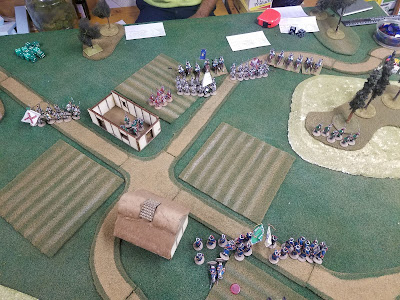 he pressed forward with the rest of his force while opening fire with one of his Shot units,
causing my unit some casualties and a Waver 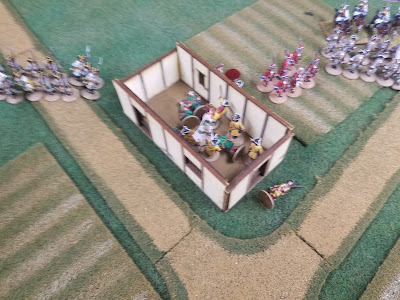 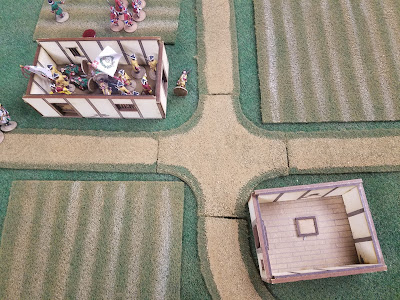 my leader then followed with the other Forlorn Hope unit,
things were shaping up nicely 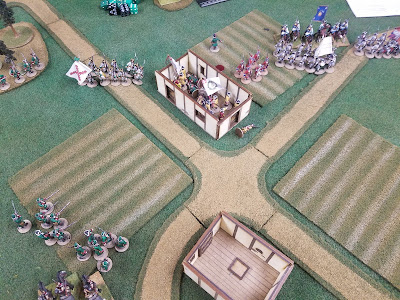 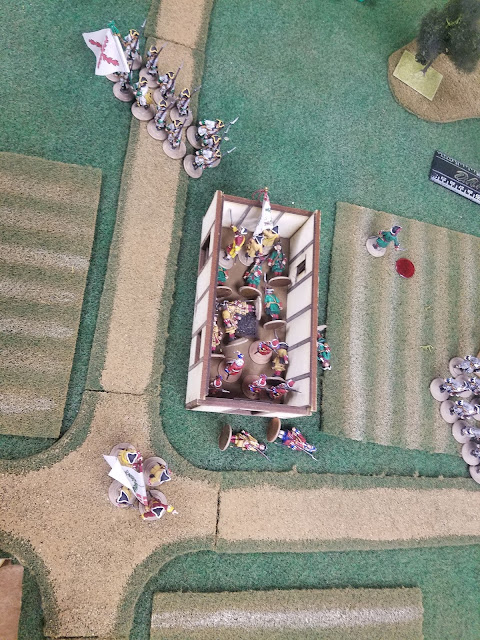 angered at the effrontery of my troops, Joe sent his general (and the rest of his Forlorn Hope unit) into the building to clear me off, which they did in grand style 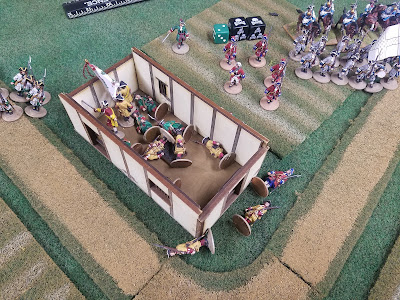 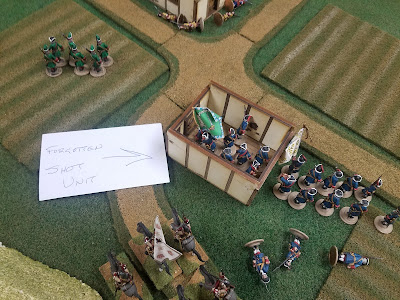 having lost a couple of figures in the Shot unit outside the small building I tried to move them into it, only to find the Shot unit that I had moved there three turns before, I had promptly forgotten about them as soon as I replaced the roof! 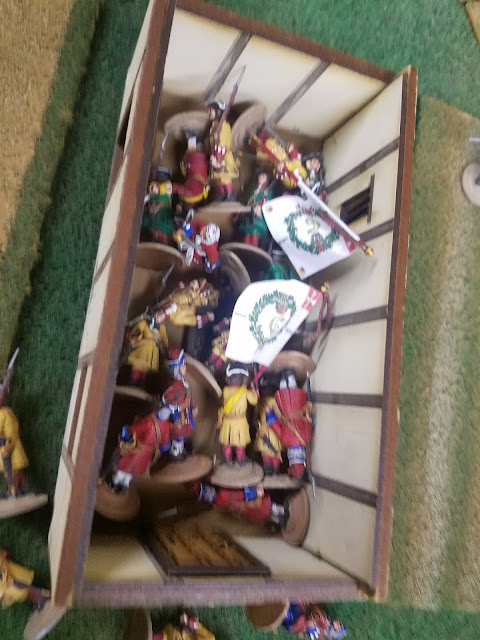 meanwhile Joe's general returned to the Cottage of Carnage and killed the rest of my Forlorn Hope unit inside, losing everyone except his general in the bargain (he is the fellow in the red jacket and white wig in the upper left of the picture) 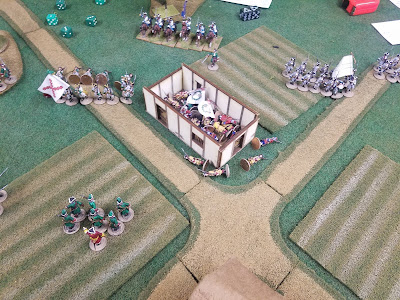 not to be outdone my general led his unit of Forlorn Hope back into the cottage only to lose them all and be sent packing, he took refuge behind a unit of Commanded Shot 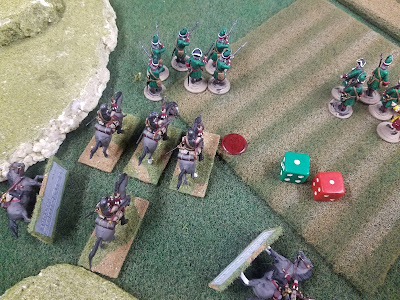 to add to my misfortune two of my Trotters fell dead
(they also, of course, failed the Morale test too, barely remaining on the field) 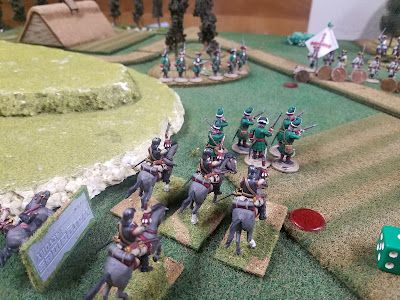 casting my eye across the battlefield I saw the source of the fire,
some sneaky Commanded Shot lurking in to woods edge 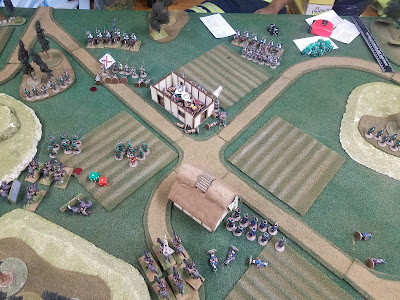 seeing that I had denied my right Joe began moving troops to the (my) left,  he moved a Shot unit up to reinforce his general (who was holding the farm building be himself) 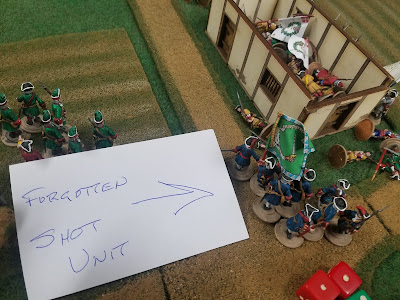 in my turn I tried to activate the Forgotten Shot unit, I rolled a double one and they promptly forgot that they were a SHOT unit and decided to charge Joe's general 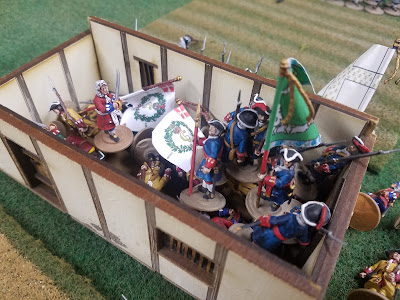 the brave leader squared off against the tide of soldiers pouring through the front door,
he killed two of them before being overwhelmed 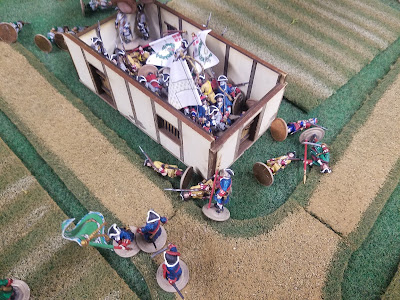 the dice roll that did that included this wierdness 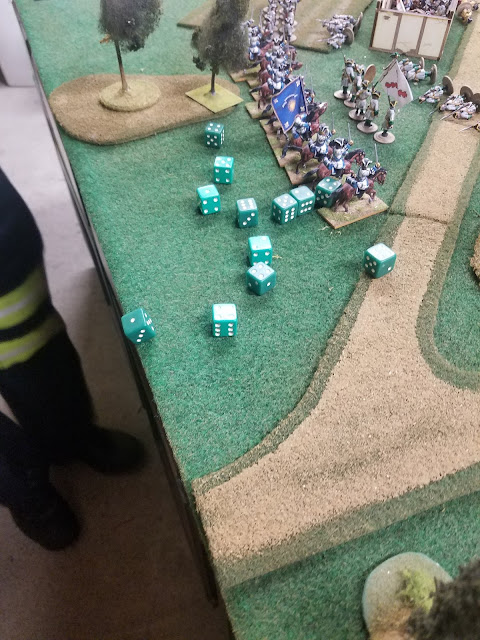 the die was balanced on the very edge of the table, one the tiny overhang of the
gaming mat that stuck out past the surface of the wooden table below 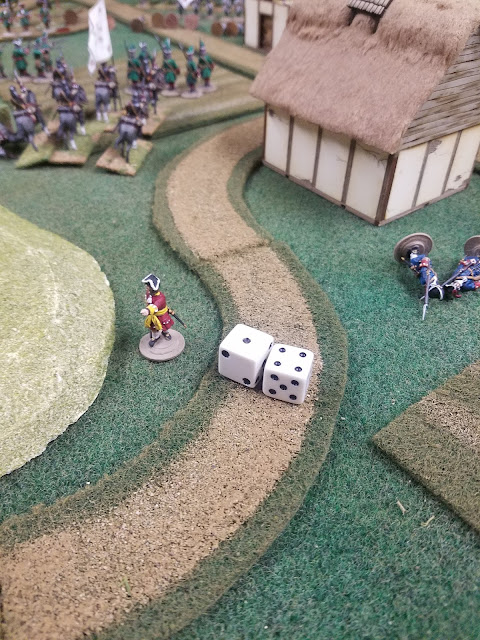 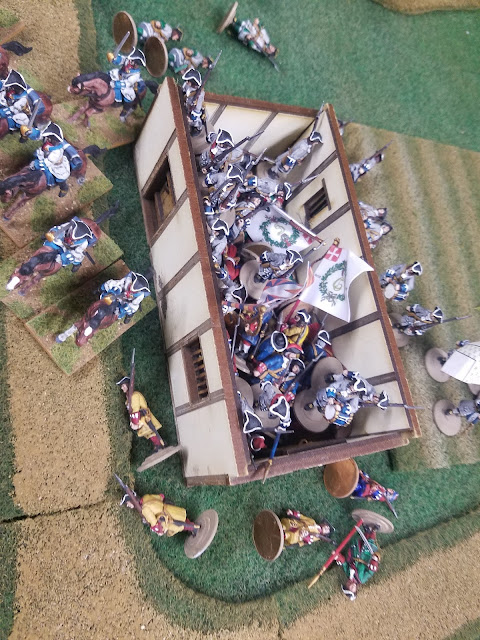 Joe's Shot unit were horrified at the slaughterhouse they found in the farm building,
five units had fought (and mostly all died) to take or hold the six by three inch structure 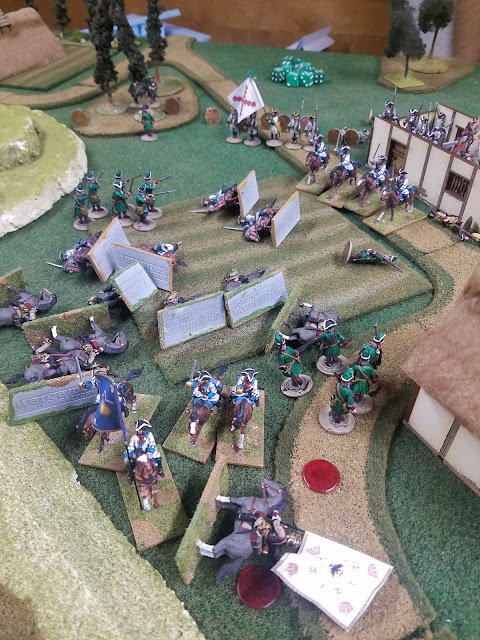 the loss of my general had caused several of my units to Waver, Joe took advantage of this and charged (and crushed) one of my units of Trotters with his Gallopers
knocking a hole clean through the center of my rapidly diminishing army 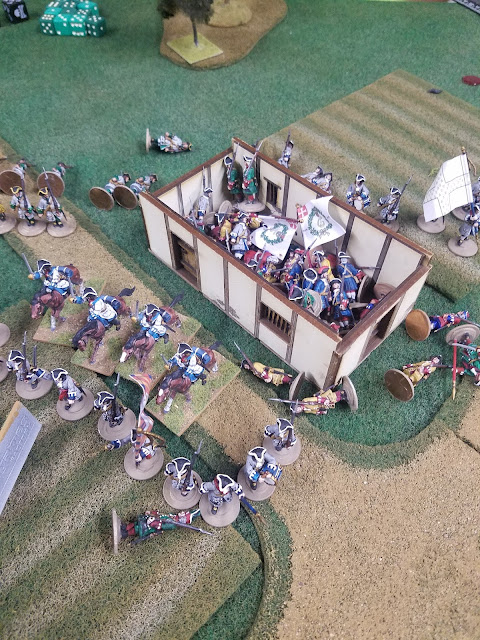 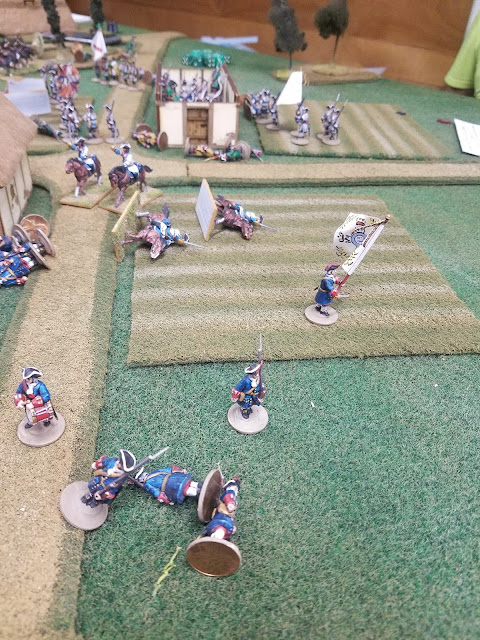 trying to move my troops to counter Joe's success I  moved the unit of Shot on my far right to take his  Gallopers under fire, I then failed my next Command roll and the play returned to Joe, his Gallopers glanced to their left, spotted the Shot unit standing in the road and instantly charged them sending them to the four winds in the blink of an eye, at this point I conceded the game

Based on this test game I am tweaking the scenario a tiny bit and adjusting a couple of things with the forces. I plan on removing one of the farm buildings and placing the remaining one in the very center of the table. The French force will be slightly restructured to further emphasize shock attack and the Dutch will be altered to focus on Firepower. Both forces will be allowed the option of trading in units for a Regimental or Field gun. 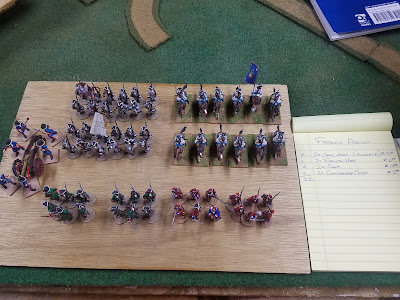 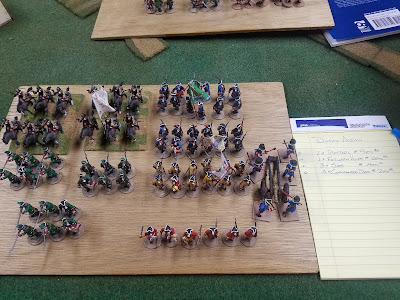 the Dutch; two Trotters, three each Shot and Commanded Shot and a single unit of Forlorn Hope