Another Pro or Con convention has come and gone. The games were beautiful, the company convivial and the bargains were available. My game was oversubscribed and I ended up with twice as many players as I had figured on; changes were made and everyone had a good time. Due to the press of action in my game I was not able to take a look at any of the other morning session games (apologies to the many gamemasters that had games with excellent terrain and beautifully presented miniature, I could only glance at your displays).
After a short break for lunch I was able to photograph some of the afternoon session games. See below. 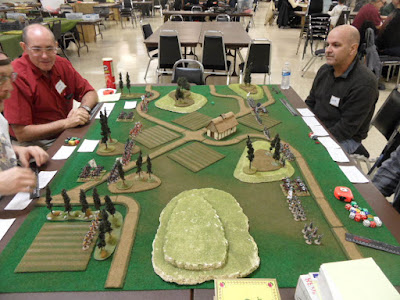 the first game I was too busy to take any photos, the second game had fewer players
and they had a handle on the rules which allowed me the luxury of taking pictures
here we see the French on the right and the Dutch on the left 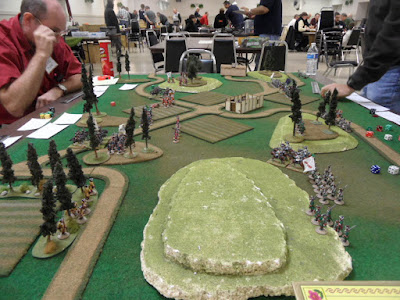 both sides advanced resolutely toward one another, the Dutch aware that their advantage lay in shooting, the French opting for a opportunity to charge gloriously into battle 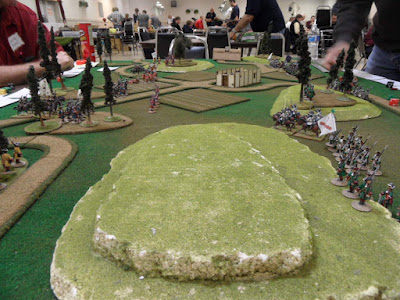 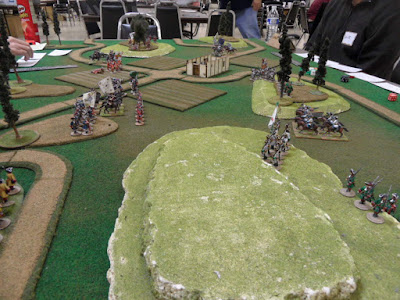 on both flanks the Dutch occupied cover, with a Forlorn Hope unit in the near hedge
and several Commanded Shot in the wooded hill on the opposite flank,
they pressed forward in the center to gain good fields of fire 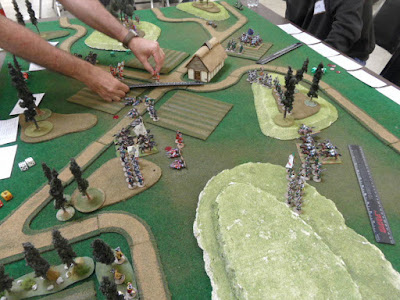 in the center the French were gaining an advantage in the firefight , but on their right a catastrophic morale failure saw one of their Shot units flee the field after trivial casualties 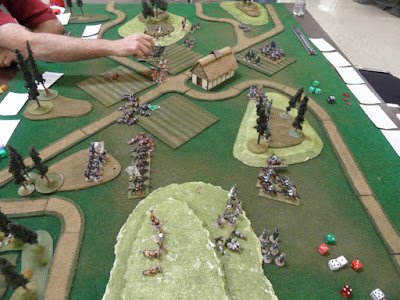 to redress the uneven fight in the center the Dutch advanced the Forlorn Hope from the tree-line to the hilltop, and the Trotters unit from the center , despite taking casualties on the approach their combined fire broke the French Shot unit 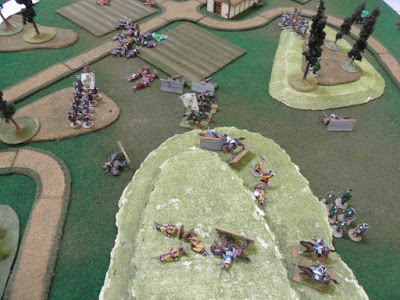 with an opportunity to charge the French Gallopers tried to clear the hilltop
but bounced away leaving a trail of casualties behind them,
meanwhile, in the center of the battlefield (top center of the picture), the farmhouse drew a Dutch Shot unit toward it, combined fire of three French units saw the Dutch Shot wiped out before they got to the building 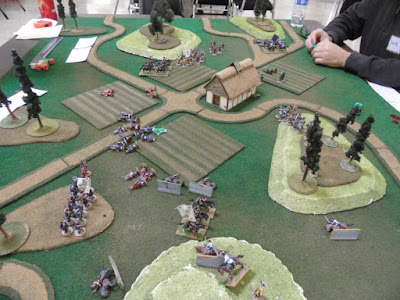 the farmhouse continued to draw forces toward it, the French trying to anchor what was left of their right flank on it and the Dutch throwing a unit of Trotters, a unit of Shot and a unit of Commanded shot into the effort to capture it, in the lower edge of the picture the Dutch Forlorn Hope was decimated by the French Commanded Shot and the last of the trotters died under a hail of lead from a French Forlorn Hope hiding in the central woods 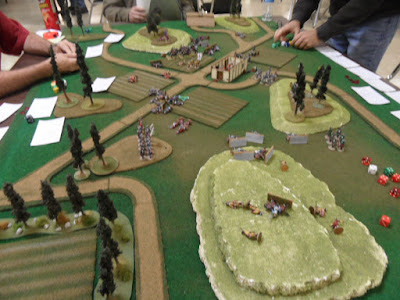 the final scene as time ran out; both sides were moving troops toward the fatal farmhouse which had finally fallen to the Dutch, in the distance the Trotters were winning a grinding melee with the Gallopers and their last Forlorn Hope unit moved toward the farmhouse, the French prepared to attack the farmhouse with a Shot unit as they moved the Forlorn Hope that way as well, nearer the camera a Dutch Shot unit and a French Commanded Shot unit eyed each other from just out of range 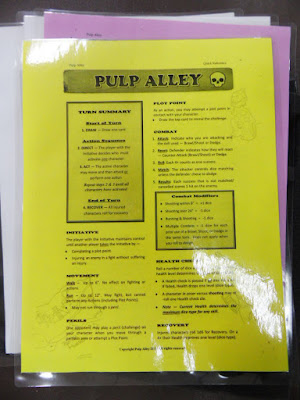 apologies to the game-masters, I lost my copy of the flyer and I don't know who was running these games but they struck as attractive and evocative, first is a Pulp Alley rendition of Dracula's Castle 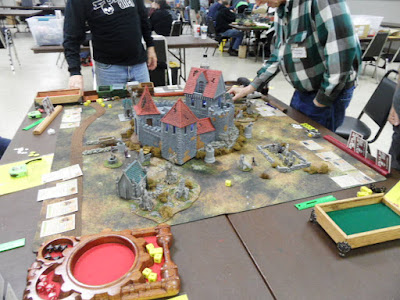 this game had the COOLEST accessories, check out the fancy dice-rolling trays 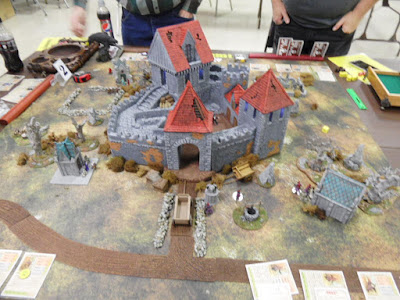 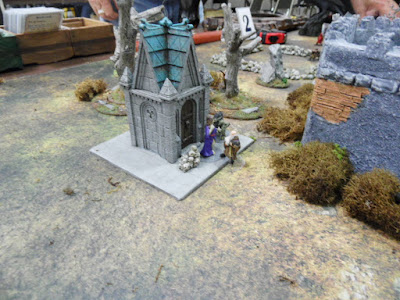 outside the walls were a series of smaller, but every bit as attractive, vingettes 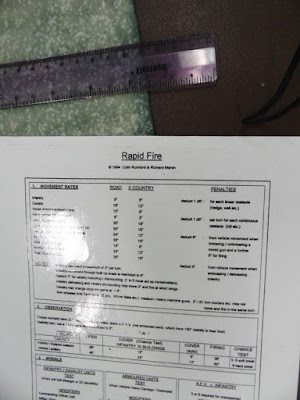 next was a massive Rapid Fire game 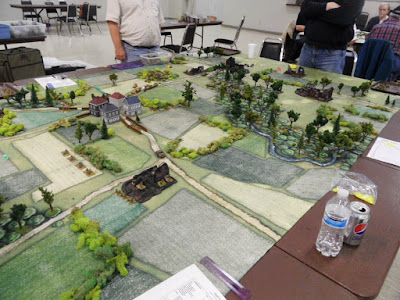 the painted game-mat made it look like aerial reconnaissance photos,
very cool indeed 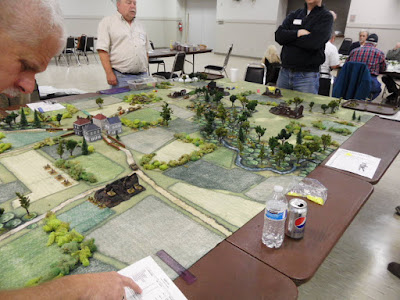 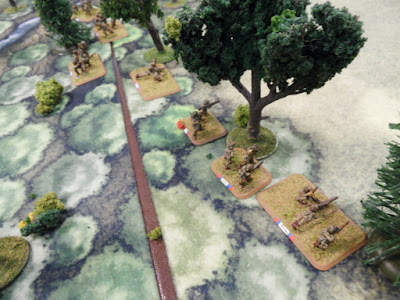 however limiting the pre-painted terrain mat may be, the look of the table is simply superb 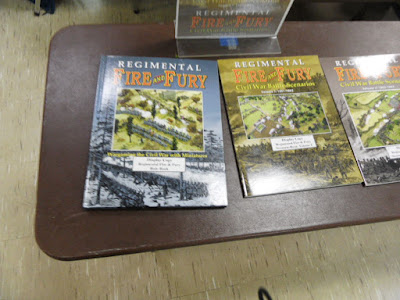 the classic Fire & Fury rules, pretty soon
they will have been around five times as long as the Civil War lasted 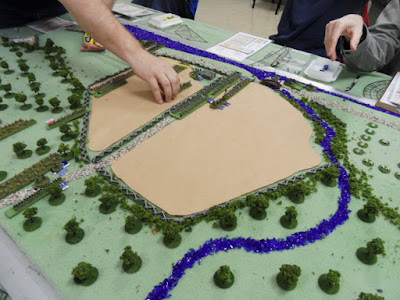 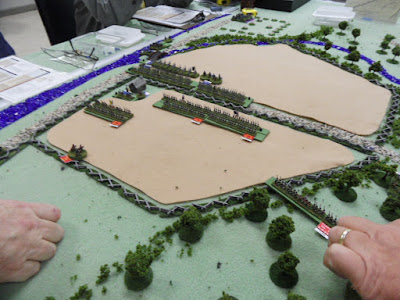 it reminds me of one of the things that got me into wargaming;
the illustrations from the old Time-Life books on the Civil War 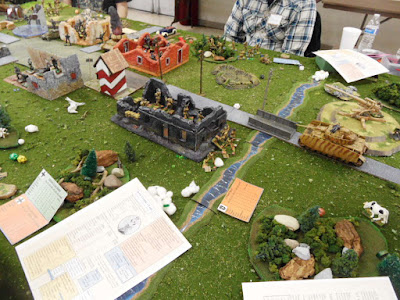 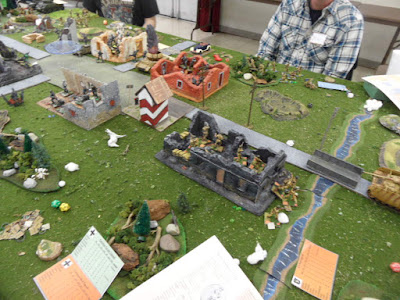 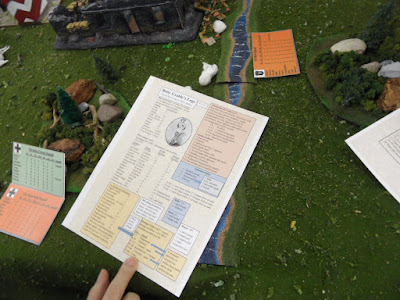 the players seemed to be having quite the time as well 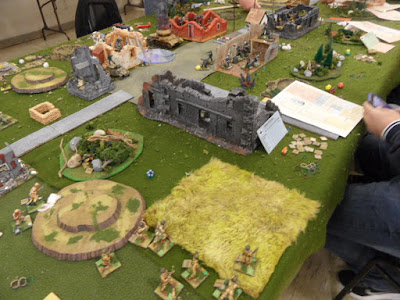 the sheer size of the terrain was stunning
(where do you store all this stuff?)