Facing the daunting task of installing bars in simply dozens of window frames I wimped out. The fact that I had run out of florist's wire and there was a snowstorm in progress gave me an excuse, but it was just an excuse and I know it.
Instead of the barred windows I opted for installing shutters, it was only afterward that I realized that I would now have to put no less than four rivets on each and every one of of the hinge straps! 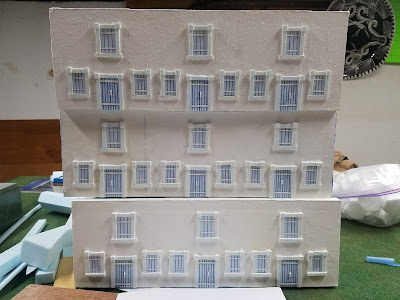 in retrospect I should have made a mold for the window and door frames
at times I am an idiot
Posted by Anton Ryzbak at 4:55 PM