A Funny thing happened on my way to the forum.

So, three odd things happened while I was refreshing my memory on Roman construction styles and figuring out which buildings to use for my Roman games.

First, I learned that the Romans invented Timber framed construction.  Timber framing was used for the lowest class people's buildings.  Basically, it was just a timber frame with various "stuff" (rubble, rocks etc) stuffed in between the timbers as a matrix and then the "stuff" was smoothed over with the usual stucco (sand and limestone).  Such construction was VERY susceptible to basically ANY form of natural disaster.  Earthquakes of course, flooding almost as much, and even fires could lay low entire sections of a Roman city with this sort of construction.
Second, while perusing a certain online website where people buy and sell all manner of things I discovered that Empire's at War sells a range of Timber framed buildings.  These are intended for Germany any time after about 1300 A.D.


Third, that same online company for some reason desperately wanted me to link my phone number to my account and upload their app to my phone.  They were so desperate in fact that they offered me a 40% off discount on any one item currently listed.  This offer arrived during a large rebate promotion as well so I would earn 10% back on the original price. 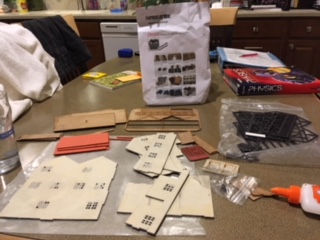 I started with the Gabled building as it is not really historically accurate and so if I screwed this up it was not as catastrophic a loss.  I painted the basic building with the Limestone spray paint used on that atrocious Sarissa kit last reviewed.  And painted the roof the same Uber Matte Salmon I have been using since the Temple.  The walls were originally painted a light while and the roof a medium-dark gray.  Here we see the kit out of the bag (after I have painted it) 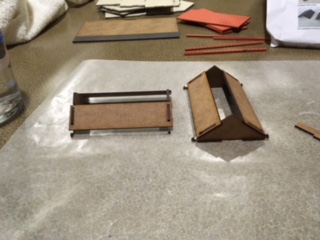 The first step in the directions was to glue the roof supports together and let them set up. 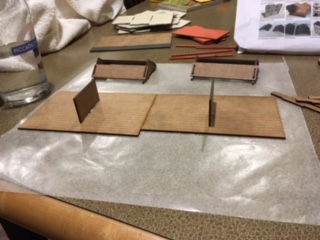 Step two was to glue the lifting handle onto the second and third floors.  That's right, these babies come with a removable floor for each level of all five buildings! 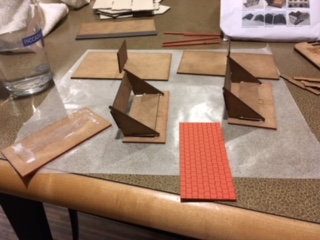 It was at this point that I added a step to the build as I noted that at no place in the directions did the directions tell me to glue the roof plates on to the roof supports.  So I just did it now since it had to be done at some point.  If you care to examine the picture more closely you can see the pattern on the roof here.  I believe the roof was intended to either be some sort of grayed wooden shingle, or even a slate roof.   However, the Romans happened to have a small rectangularish clay roof tile style so I just painted them a new color lightly.  Be sure to go easy on the paint as it allows the pattern of the tiles to show through the paint. 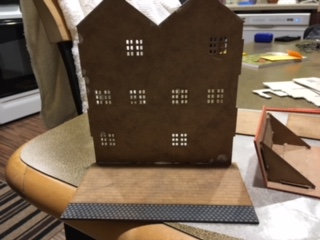 Next up, glue the back of the building in place.  These are odd kits.  In this instance only the back wall actually locks into the base, the other three walls are just glued down and to each other.  As the glue sets up, and later elements are added, this can make the build tricky so be careful. 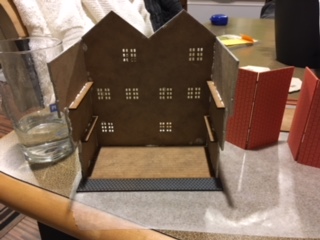 The next step is to glue on the side walls which had the supports of the removable floors.  These walls are glued to the back wall and to the base.  However, these pieces do not lock together very well.  It appears to me, after wasting considerable amounts of time fiddling around with these pieces that they are not intended to "lock" into place.  But do not be concerned gentle reader, in the end we will have a clean and well finished product. 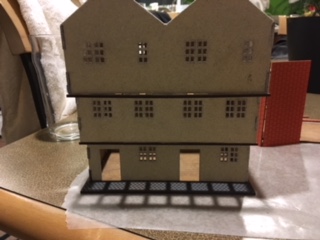 The next step involves gluing the three pieces that make up the building front in place.  Underneath each of the second and third floors an odd piece is also glued to lock the front of the building to the floor below.  These odd pieces can be seen in shadow in the above picture as a series of squares on the table in front of the building.  These come from the room lights shining through the holes from above. 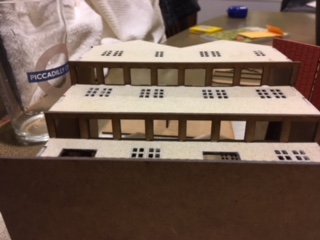 Here is a view from below showing these pieces more clearly.  Once the glue sets up these pieces add a great ideal of rigidity to the floors and overall structure.  They particularly lock the extended floors into the whole building. 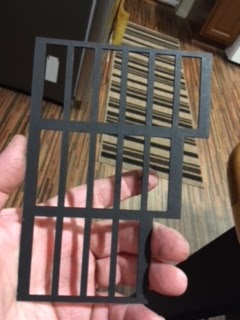 Now it is time to add the Timber frame to the building.  Literally this is just an applique that is glued on the appropriate side of the model.  The above piece is the left side (looking at it from the front).  The back side is white, the showing side is black.  The 'black' in this case appears to be some sort of graphite.  It is extremely messy.  DO NOT HANDLE THESE PARTS IN LIGHT COLORED CLOTHES!  These things are really messing and make quite a mess in side the bags as well.  They piece is laser cut like everything else and seems to be made of some sort of very thick paper or card, not too unlike the stuff that makes up the roof in the in the shop kit by Sarissa.  I did not like the stuff at all as a roof, but when you are gluing onto the side of a building as an effect, it works much better.  However, I can not emphasize how messy these parts are, despite being careful I still ended up smudging some of the crud on the walls of the building.  But I did manage to keep it off my clothes. 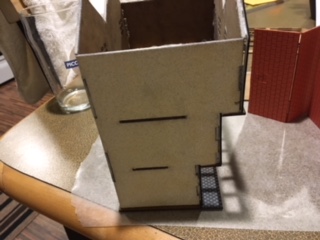 Here we have the appropriate wall that the timber effect is about to go on. 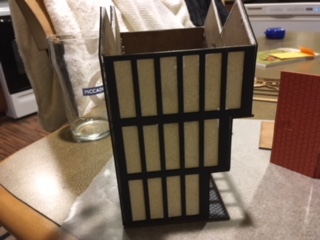 And here is the finished side. 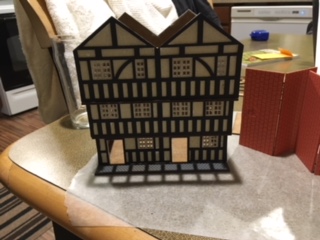 Here is the finished front of the building.  This is three separate pieces of the timber facing. 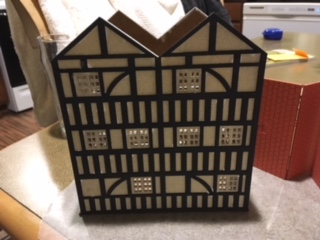 And here we see the back of the building. 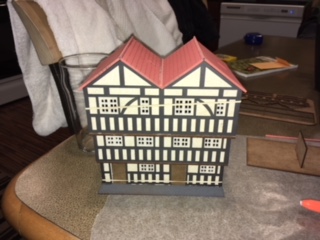 Here we have the basically finished building.  The only thing missing is the doors (I forgot to paint them).  The roof is finished off with a pole running across the center line of each section.  I added spare stick of mdf on the edge of the roof section on the left as you look at this picture to create something to cover the crack between the two roof halves.  I did not glue the two roof sections together, but just wanted to cover an obvious crack in the roof line.


This kit goes together well and looks really good when completed.  I will probably use it despite its 'barbaric' appearance because I like it.  I have not washed the kit as I am not sure that would be a good idea with the general nature of the timber effect.  However I may try simply putting the wax on it to try and lock in the timber clad mess.  If you are looking for these sort of buildings these are great models and would be strong choices for your gaming.


At $10 it is a fantastic item for inclusion in any game if appropriate.
Posted by The Housemartin at 11:13 PM