Book Review The Battle of Killiecrankie The First Jacobite Campaign, 1689-1691 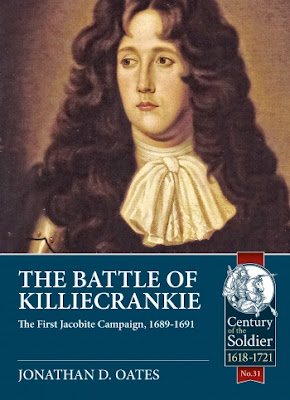 The title is perhaps a little misleading, the Battle of Killiecrankie features large as it was early in the campaign and a stunning victory of the Highlanders over regular Government forces but this book covers the entire Jacobite cause from 1689-91. Oates covers not just the military campaign but also significant portions of the political situation and the logistics of trying to campaign in the unforgiving terrain of the Scottish Highlands. The text is clear and easy to read (except for some of the lengthy quotes from the period; a combination of the local dialect and the lack of standardized spelling makes interpreting them a bit difficult) and moves along at an easy pace.

Oates avoids falling into the romanticism for the Jacobite cause that has tainted many earlier works, but he is no apologist for the forces of William III. Most of his sources are from the Williamite side but that is because so little military documents survive from the Jacobite side. Force organization is listed for both sides in each of the three major battles and the author is clear in his writing when he is quoting a source or making a best guess.
The book opens with a brief stage-setting description of Scotland at the end of the seventeenth century then moves to examine the Jacobite forces (they weren't all Highlanders by a long shot) then moves on to describe the troops of the Dutch upstart. Having laid out the forces involved Oates describes the maneuvers prior to the Battle of Killiecrankie.Of particular interest (at least to me) was the difficulties of a regular army operating in Scotland where they struggled to gain any worthwhile intelligence of their opponent. This was not helped at all by the vicissitudes of trying to maintain a cavalry force of any size, not to mention the fact that most of these "regular" units were newly raised and far less familiar with warfare than their Jacobite opponents. The detailed description of the fight and aftermath at Killiecrankie probably takes longer to read than the actual battle took to conduct.
The book continues with an assessment of casualties on both sides and the impact of the loss of the charismatic Jacobite commander Dundee. Of all the losses at Killiecrankie the bullet that took his life did more to determine the outcome of the campaign than all the rest fired during the war. Without their leader the Jacobites seemed at a loss of what to do with their victory and the campaign drifted along without a coherent direction. The struggle of the Williamite forces to reorganize and resupply are dealt with in detail as are the fruitless efforts of the Jacobites to garner some form of material support from King James. This book makes clear that logistics and money were the two greatest stumbling blocks to both sides efforts in this conflict.
The book continues and describes the nest two major battles; Dunkeld, a desperate last-stand by the isolated battalion of the Cameronians who by dint of blunt courage and inventive tactics managed to survive a night-long assault by probably five time their number of Jacobites and the final battle Cromdale an unmitigated disaster for the Highlanders as they were caught in their encampments by a night march of the Williamite troops. Both these battles are treated to the same level of detailed examination of forces and dispositions that Killiecrankie was given.
Battles aside the overall strategic situation is given consideration as well. Throughout the campaign MacKay pressed William for naval support to keep the Islesmen from lending support to the Jacobite forces in the Highlands. When he finally obtained it the impact was immediate and effective. Although briefly covered the naval side of the campaign points to several interesting gaming possibilities.
Throughout the book is well illustrated with period artwork and contemporary photos of the battlefields and monuments. A color section illustrates the uniforms of the combatants in what could only be described as a primitive manner. As a guide to the color and shape of the uniforms they are adequate but they are nowhere near the standard of artwork that one has come to expect in a modern publication. The maps are functional but lack enough detail to use as anything other than a guide to searching Google Earth for the landscape.

Despite my reservation regarding the artwork and maps I still give this a Very Highly Recommended rating due the concentration of information and the detailed analysis of the campaign.
Posted by Anton Ryzbak at 3:37 PM