02 Hundred Hours, Starter Set; a skirmish game with a difference 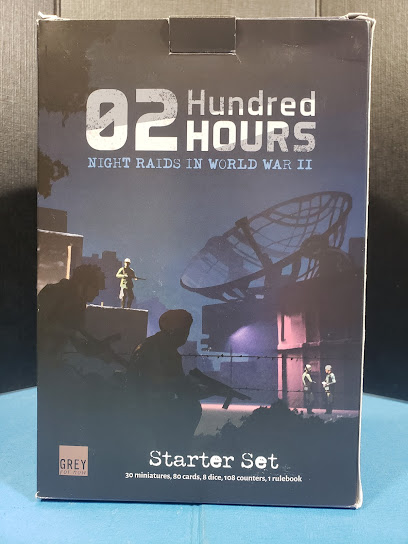 nice box art on the cover,
the box is kind of flimsy but you wont be using after
you assemble the minis anyways so it doesn't really matter
I have been waiting to get my hands on this since I first read about it in the British glossies. I picked this up from the good folks at Michigan Toy Soldier. The central premise of the rules is a one-to-one skirmish in the dark. Strictly Special Ops/Commando/Resistance type stuff! This isn't a regular skirmish game that has been adapted to "playing in the dark" this system was built from the ground up to address the circumstance and difficulties of stealthy operations in the dark. There are some examples of play available on Youtube.
But not only are the rules specially adapted the minis that come with this set were specially commissioned for this game (you can use them for other rules if you choose, of course). The remaining components, while fairly standard, are of very good quality as well.
Let us take a look. 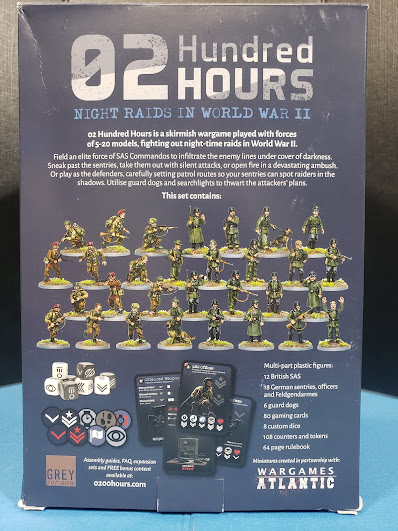 the back has the assembled and painted minis, you know exactly what you are getting 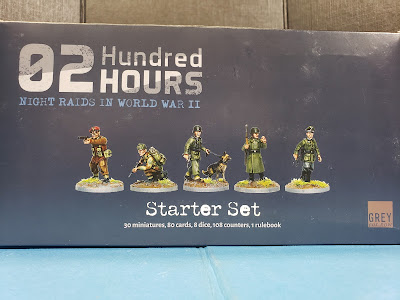 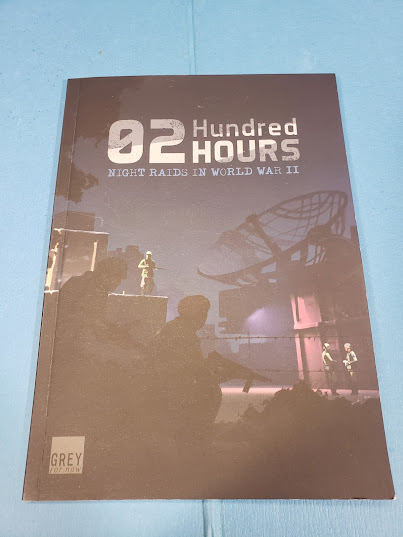 the small rule-book is nicely bound and heavily illustrated 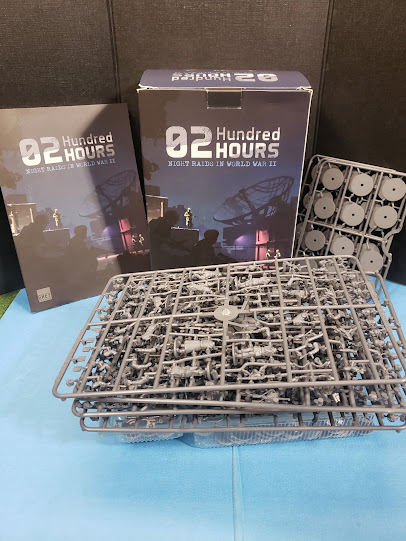 the box with its contents; rulebook, special dice, counters, cards and minis 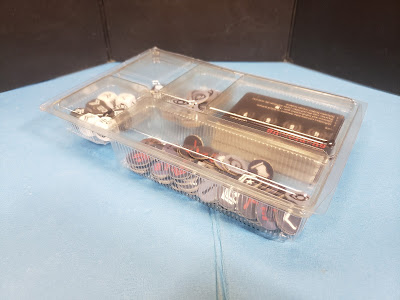 it even has a nifty tray to store the counters, cards and dice in 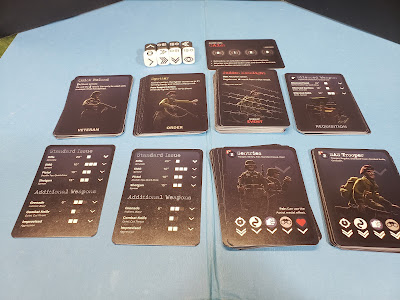 the cards are clearly printed on good-quality stock and have a semi-matte finish
(which makes them easier to read) the dice, though smallish, are solid and roll well 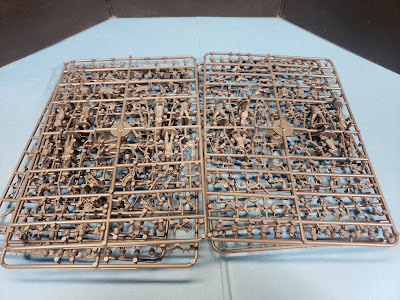 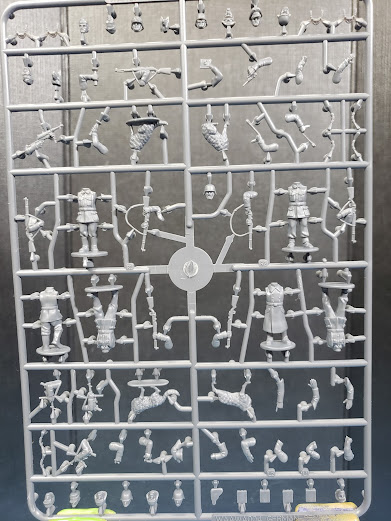 German sprue, side A 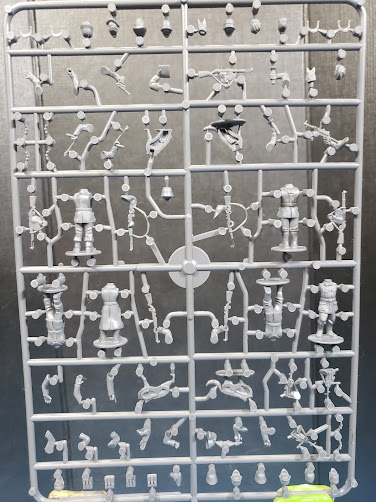 German sprue, side B 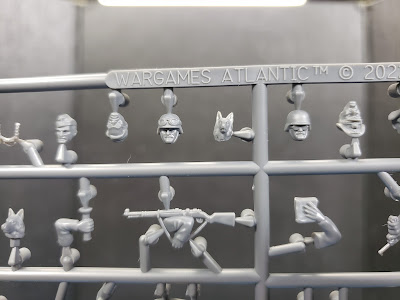 detail is crisp, the faces are different from one another
this being a Wargames Atlantic product there are many more heads than you will need! 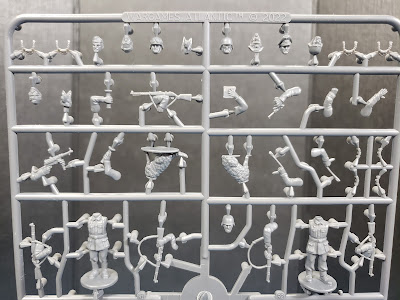 and the dogs actually look like dogs and some of the sentry hands have flashlights! 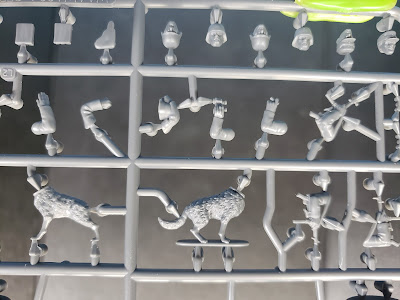 weapons are mostly slung,
these are bored rear-area sentries so that is probably very much spot-on 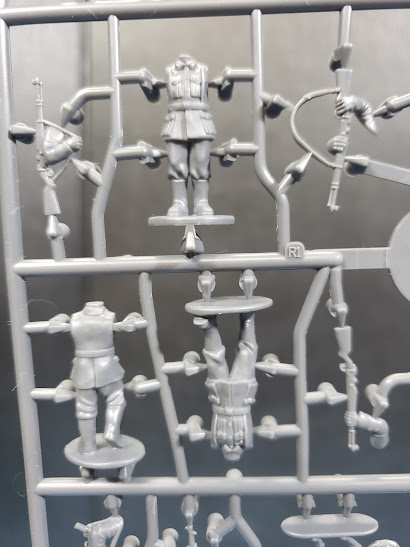 the German troops are posed walking in an unhurried manner 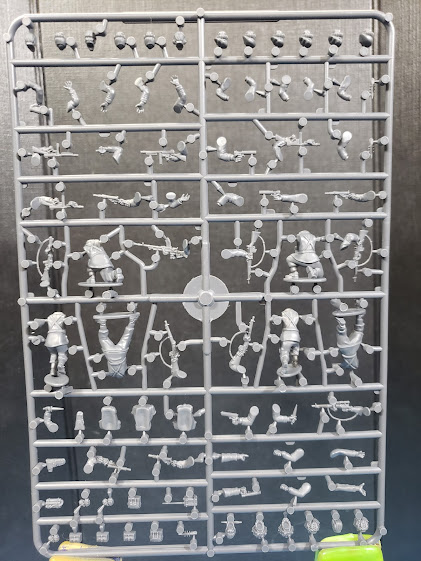 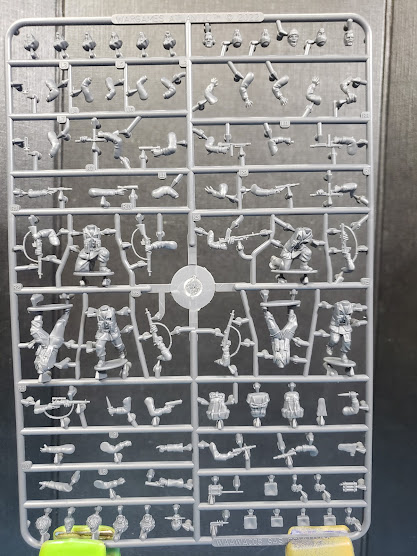 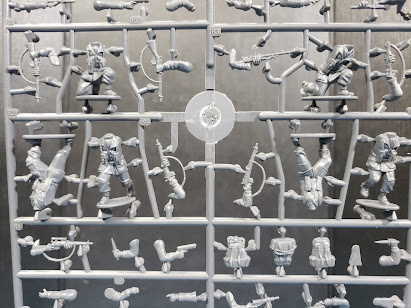 much more actively posed, the draping of the fabrics is very well done 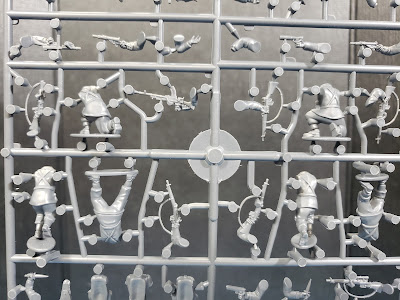 there is a fearsome collection of weraponry:
from the dreaded Fairbairn-Sykes knife to  Tommy guns and rifles 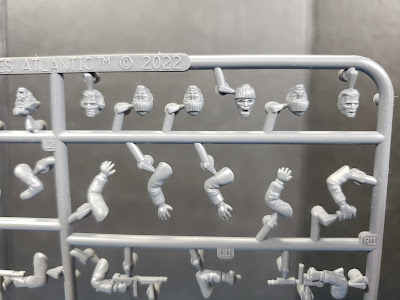 a wide selection of headgear  and many different faces 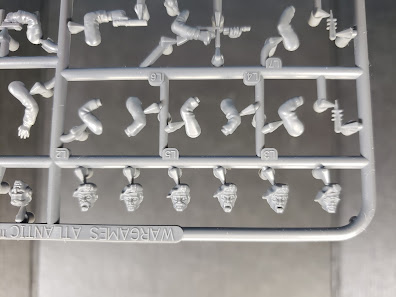 including the ubiquitous beret 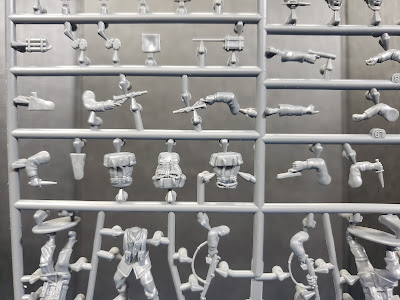 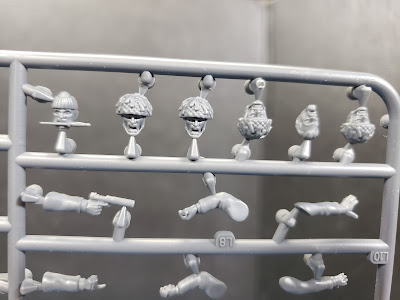 the chap with the knife in his teeth is amusing 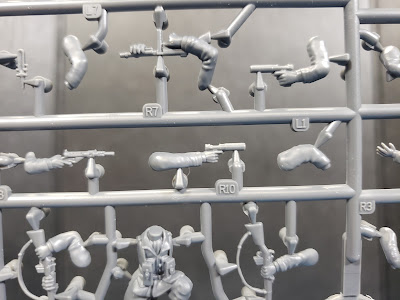 the detail on the weapons is excellent

Having watched several of the videos of games in action I have bumped the minis to the front of the "Build it Now!" queue and I am currently searching for info on S.A.S./ Commando uniform patterns and camouflage. The physical properties of this set alone would recommend the purchase but having seen the game-play I am going to give it a big thumbs-up and Very Highly Recommend to anyone bent on a bit of derring-do in the dark.

I can see nearly endless variations on this theme; SPEC-OPS in Afghanistan, Resistance fighters vs Nazis, Great War trench raids, Iroquois vs Colonist, the limit is the entire span of history!