Pat hosted a game last weekend of PLO vs IDF using Two Fat Lardies "Rock the Casbah" rules; these are clones of the TWaT and B'Maso rules tailored for use in games reflecting the conflict in the Holy Land.

The scenario was straightforward; the IDF needed to get off the other end of the table as fast as was feasible whilst suffering as little casualties as possible. The IDF troops are part of a deep penetration force trying to cut off retreating PLO forces. The PLO force is a scratch force thrown together to delay the IDF as long as they can to allow their compatriots to escape the pincer movement. The PLO have no heavy weapons and only intermittent mortar support, the IDF is an entirely motorised and armored force with helicopter gunship support.

Here we see the table as veiwed by the IDF players, the narrow road runs between the citrus orchards that are such a common feature of the south of Lebanon, the orchards are divided by high stone walls that are too tall for a man to see over and even pose a significant obstacle to tracked vehicles. Click on the photos for a larger view. 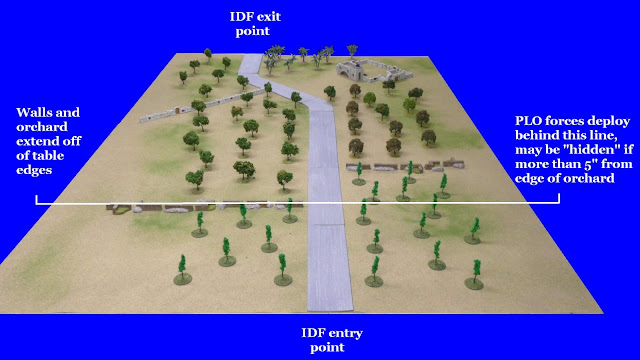 This is the scene from the PLO perspective, a couple of good choke-points but the lack of heavy weapons means the fight will be up-close and bloody, not a PLO speciality. The IDF has good troops that are well-led and mounted in armored vehicles, they are armed to the teeth with automatic weapons. The PLO has five units, four of them assault rifle and RPG armed the last is an LMG. The real crippling factor is the shortage of leaders on the PLO side. 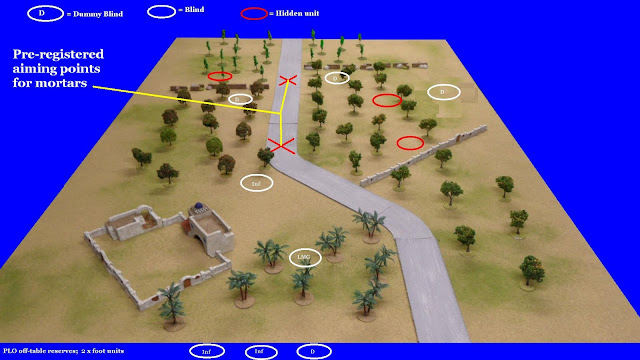 The PLO placed their dummy blinds so as to make the IDF players expect an immediate ambush from both sides of the road, hoping to make them deploy and move with caution. The real units were marked as hidden and placed further from the road so as to be able to react the the IDF deployment. The two pre-registered aiming points for the mortars were placed on the road to create a "box" with dreams of trapping the IDF between them, little did they know just how sporadic the mortar support would be. As usual, Pat put together a fine looking table. I particularly like the walled compound at the northern end of the table. 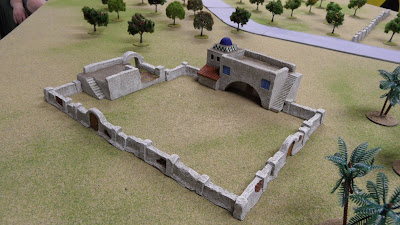 To the surprise and consternation of the PLO team the IDF players promptly spread out from their entry point and deployed using blinds of their own (spotting is difficult for crappy troops like PLO so they faced a situation of being on the defensive but operating blind at the same time). Fortunately for the PLO they rolled well and spotted a Zelda on the road from the RPG team at the far end of the table. Using the tried and true WTF method of reasoning they decided to open fire at extreme range in the hope of hitting the Zelda before it had a chance to open fire. To everyone's shock the round struck home and damaged the Zelda and wounded some of the crew (wounds in Rock the Casbah act as supression or disorder points, they reduce the effectiveness of the unit until they are removed). 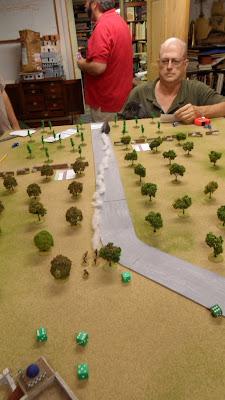 looking south at the target of the RPG shot,
note the IDF blinds moving east through the orchards
and the PLO blinds hunkered down on the near side of the walls

The random unit movement that is the core of the game now granted the PLO all the dreams they ever wanted and allowed them to fire again at the newly spotted M-60 tank; an even more difficult roll was quickly passed and the tank took minor damage. Much cheering was heard from the PLO camp. 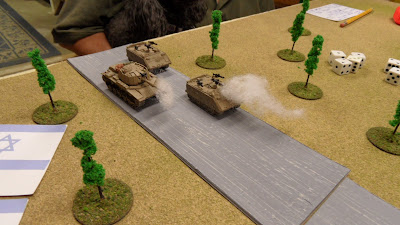 This to be quickly followed by even more rejoicing as the hidden unit nearest the south end of the table was nearly run over by a Zelda moving as a blind (this vehicle was unable to react as it had used all of it "activation points" rushing to its location) they spotted the moving vehicle at point-blank range easily enough and fired an RPG at it.  As luck would have it the projectile struck the Zelda damaging the top-deck LMGs, stripping the vehicle of its on-board firepower. Happily for the IDF the troops inside escaped unscathed, they promptly dismounted and hammered the PLO squad with small-arms fire. 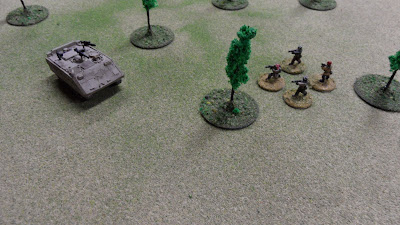 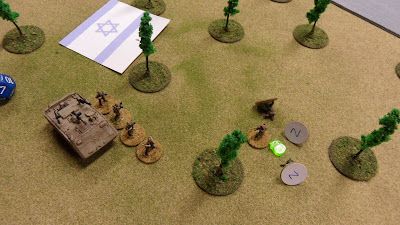 that price glory!
all but one PLO has fallen

As the IDF continued moving down the road the stunningly lucky RPG team at the north end of the table decided to stretch the credibility of random probability and take yet another shot at the IDF armor. A new Zelda had taken over the point position and was thus selected as the target. The Zelda crew had saved an activation point to employ their smoke cannisters just in case they were fired upon﻿, this allowed them to "pop smoke" when they saw the RPG team lining up their shot (the rules allow troops to "save" any or all of their activation points to use to interrupt later enemy actions - a sort of overwatch stance). It did them little good as the RPG team rolled a pair of sixes and another shell slammed home against the luckless IDF armor force. This caused but nominal damage. The thoroughly angered IDF forces finally had an opportunity to open fire on the pesky RPG firing squad which was quickly reduced to a lone figure. 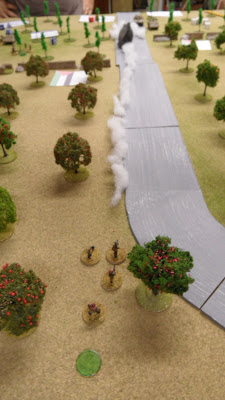 Not to be put off by some rag-tag troops firing missiles at them the IDF doggedly mopped up the hidden unit in the orchard and then proceeded down the road. Along the way they revealed the blinds as dummies and thus were freed from the threat of more RPG attacks, or so they thought. As they pressed northward they encountered the two hidden units west of the road, these disclosed their positions by firing the ever-present RPG at the two lead Zeldas, destroying one and damaging another. This caused the crews to dismount and open fire on the PLO squads. The tank joined in and the losses mounted against the PLO. The PLO had finally gotten mortars and had used them to drop smoke at the northern aming point to cover the retreat of the remains of the improbable RPG team and to allow the LMG team to move to the walled compound. 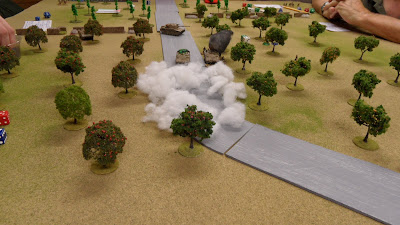 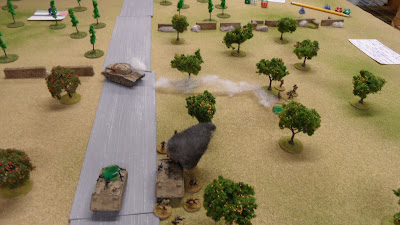 another RPG damages the tank 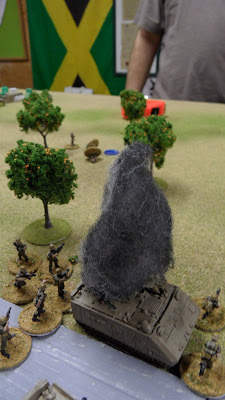 The PLO ambush teams survived long enough to get a second chance at firing their RPG and this time damaged the tanks main gun. In retribution the IDF infantry team demolished the remaining PLO troops. The PLO mortars ranged in with HE only to find that it had no effect on the tracks, it did manage to hit a few of the IDF grunts to no great effect. One Zelda swept through the now vacant eastern orchard while the others on the road recuperated and rearranged troops into the remaining runners. 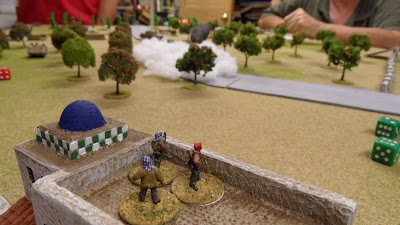 With their troop-loads now sorted out the IDF again moved forward only to find that the PLO had brought on new squads, one had snuck into the walled compound (just in time to see the eastern orchard Zelda scoot past and off toward the north) and another hot-footing it in from the south. Pressed from both the north and south and being pounded by mortar rounds the IDF remembered their mission and again began moving northward. The platoon commander leading from atop his APC (there was not enough room to load everyone inside the two remaining APCs so he chose to do the heroic thing and take the position of greatest risk). Fire was exchanged between the PLO in the compound and the passing IDF armor, but the gods of random chance decided to even the odds and the PLO scored no more hits. As the IDF raced northward the helicopter support showed up and took the compound under fire. 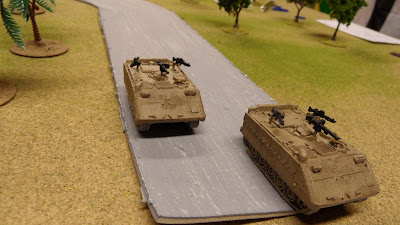 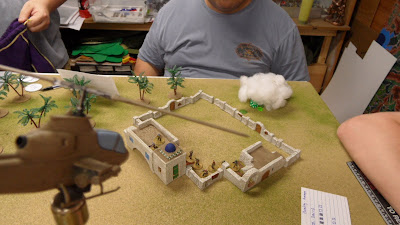 A Cobra gunship takes the compound under fire

This was another fun game that explored another dimension of the Two Fat Lardies game system. I am interested in playing a WWII skirmish game involving US Marines vs Japanese troops in the island-hopping campaign of the Pacific war. The blinds, hidden movement and random order of movement seem to create the uncontrolled nature of skirmish conflict.