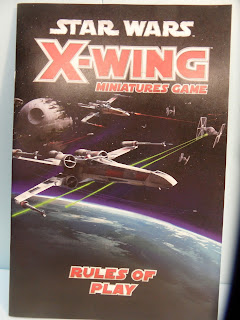 Justice&Rule came by a while back with a ton of these beautifully painted models of the Classic Star Wars ships (not those horrid things associated with the Part I/II/III tragedy, the REAL Star Wars stuff) and a set of rules. I have always had mixed feeling about playing 3D games on a flat table but have been able to work past it if the rules were fast and fun (Wings of War/Wings of Glory, Battlefleet Gothic and the Check Your 6 series). The tiny size of the rulebook meant that the rules would likely be easy enough to understand, even for a wargaming dinosaur like me.

Play is very much like Wings of War without the need to plan three moves in advance, each turn you choose the maneuver you are going to execute and indicate it by setting the ship-specific "move indicator". These and neat, very well produced discs that operate like the base of a Heroclix figure, you simply dial up the move and lay the indicator face-down behind your ship. These are all flipped at the same time. Each ship the executes its move in order of lowest skill to highest, shooting is then undertaken but this time the order is reversed, the best pilots shoot first and on down the line with damage occurring right away (so if you are a poor pilot you may be shot out of the sky before you get a chance to take your shot, rather realistic). Movement is conducted using the supplied movement arcs (much like the cards in Wings of War the model is placed in contact with them and then moved to its new location) that correspond to the moves indicated on the movement indicator. All this is far simpler than it sounds. And Jolly fun to bot! On top of it all the models come pre-painted and are very nicely done. The rest of the components are absolutely top-drawer, thick card and glossy finish all the way. 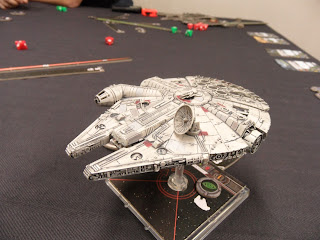 one my all-time favorite spaceships, the Millenium Falcon 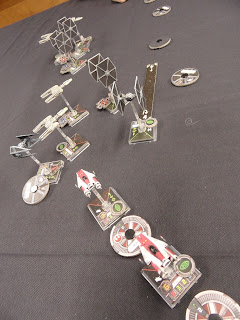 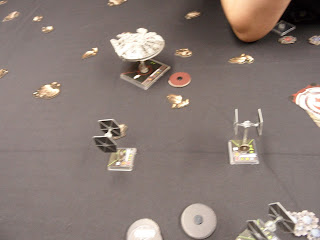 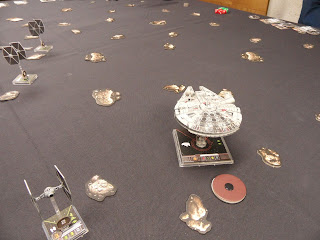 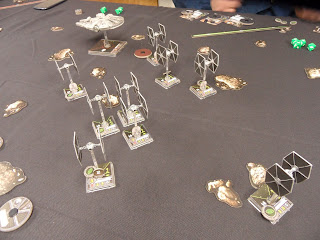 If you like your classic Star Wars and want a fun, fast-playing game this is certainly something you should look at. Recommended.
Posted by Anton Ryzbak at 2:45 PM