We re-join the game as the IDF blinds come onto the table (for those not familiar with Two Fat Lardies rules; units are represented on the game table by "blinds" -a sort of generic marker- until an enemy unit identifies them by use of the spotting rules, this helps avoid the "thousand-meter tall general " situation that plagues many rules). For the PLO players this is often the worst part, not knowing if it is a Jeep or a Merkava until you force the blind to reveal, often with disastrous results for the unit forcing the reveal . For the IDF it is worse, you know you are a sitting duck but can doing nothing about it but move forward, scanning every window, hoping to spot enemy activity......... 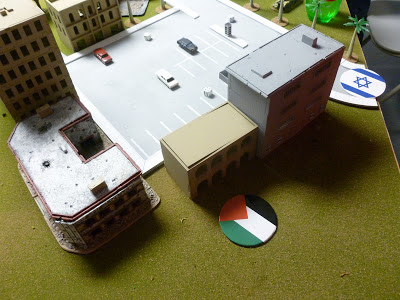 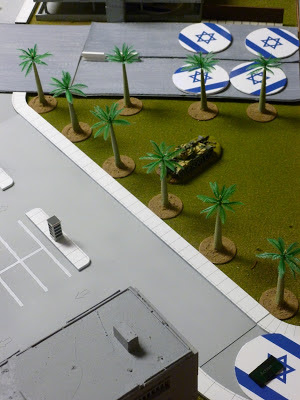 while a large force rumbles up the main highway into town 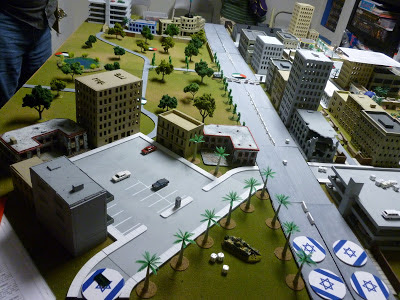 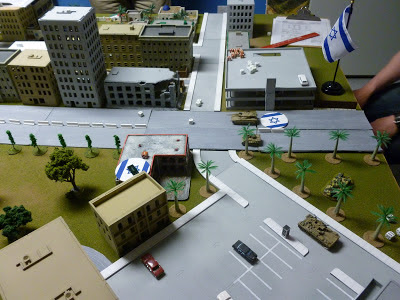 some frantic spotting by hidden PLO units reveal the bad news,
a Merkava in the lead with a Vulcan mini-gun armed M-163 in attendance, other IDF units escape detection and move into the parking structure and the Hospital administrative building 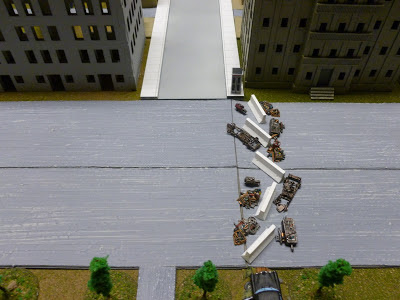 meanwhile the UAV scrutinized the PLO blind at the barricade and found it to be a rumor,
the PLO players learned to hate that little plane by the end of the day 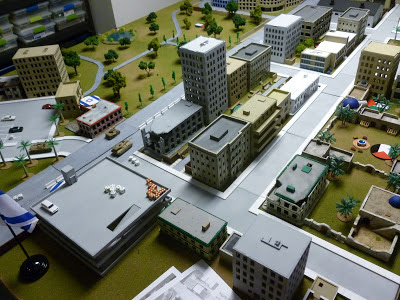 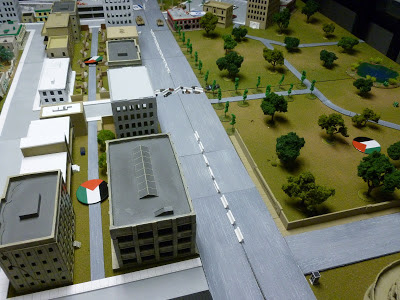 the view from the PLO end of the table, things are going OK so far
the IDF are heading straight at the tank-proof barricade with their tanks 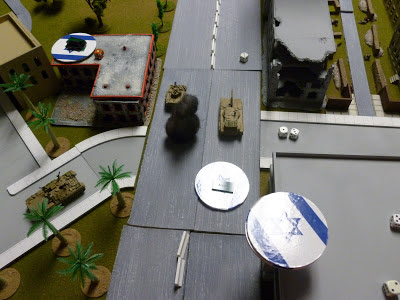 just as the IDF blind gained the rooftop the PLO got some fire-support from its mortar teams,
firing on a pre-registered spot in the intersection this fire did little to slow the IDF advance 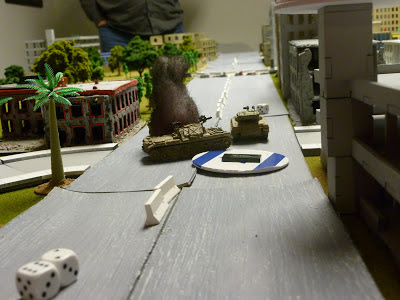 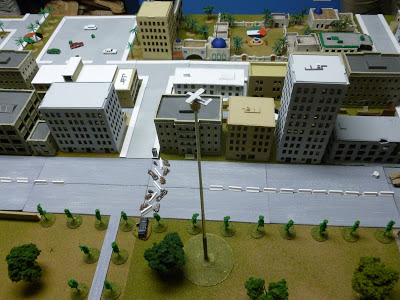 and the drone droned on, spotting blind after blind 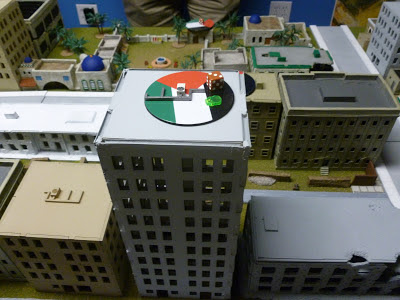 like those PLO guys on the third floor of the high-rise,
being the only known target they rapidly received the attentions of every available IDF unit 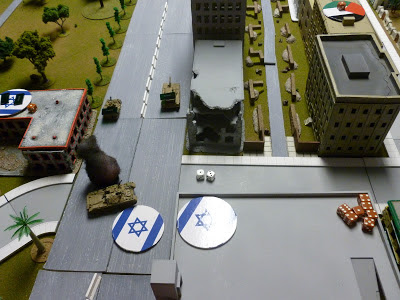 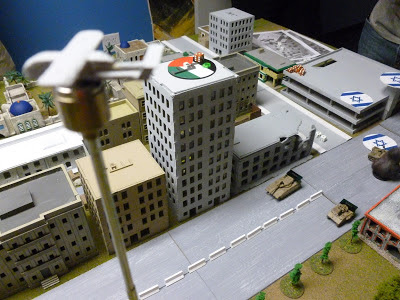 I REALLY started to hate the drone, not because it was so terribly effective,
but largely because there was NOTHING we could do about it, and nowhere to hide 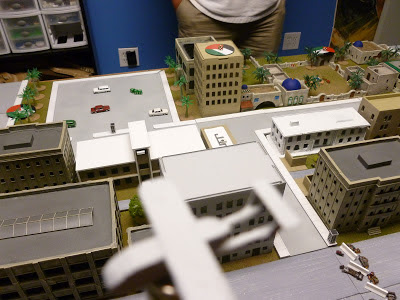 even clear across the table the PLO were being spotted,
they were reduced to furtive dashes between buildings 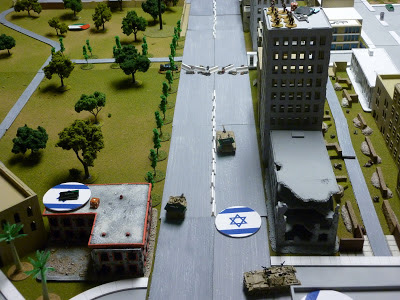 the Merkava advanced, ignoring the PLO above
while the M163 paused and gave them a blast of mini-gun fire 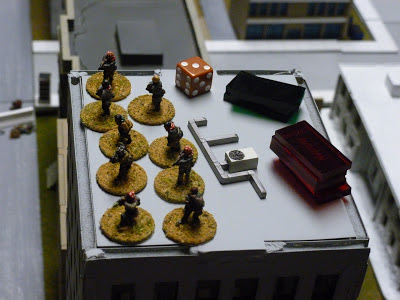 "taking a hit for the team" got new meaning that day,
but the PLO troops gamely stood their ground to return fire 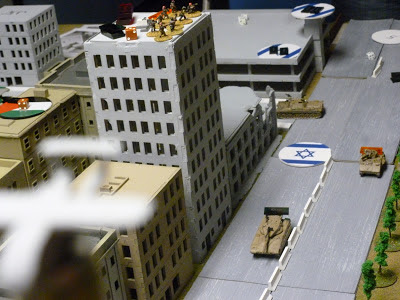 this turned into a deadly-earnest, but horribly lopsided,
firefight between the M163 and the PLO RPG team
until a lucky RPG hit forced the M163 to retire 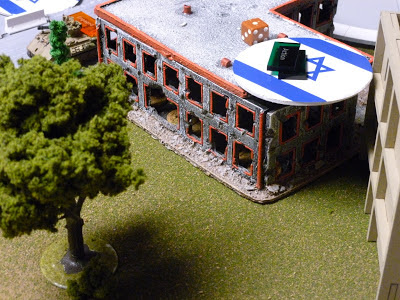 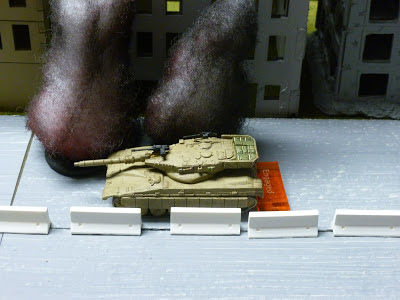 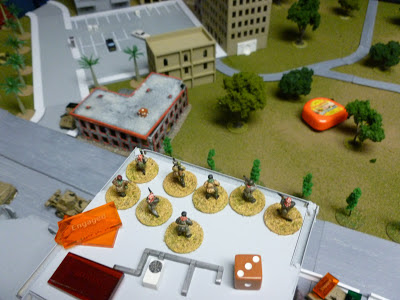 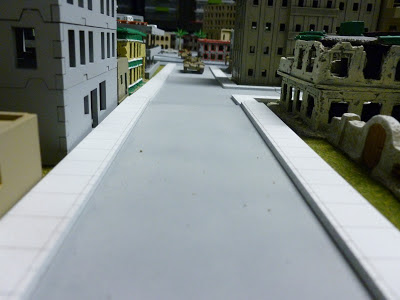 what dangers await here?
the Nagmashot contemplates a dash through the Old Town

Things were getting serious now. The PLO had managed to reveal most of the IDF blinds at small cost to themselves. The problem was this; what did they have that could slow down the IDF advance? From the Israeli point of view their advance had been slowed and they had not yet located the main body of the enemy forces.

Stay tuned for the next installment; Part III:   Engagement!
Posted by Anton Ryzbak at 1:19 AM