For once the Earthlings make the move!  (by the way this is the Housemartin reporting)


So this time we are trying some rule modifications and some newly finished figures.  I decided to get the foot troops finished off so this action sees only a couple of the Martian walkers and A LOT of foot troops.  Namely this will have Martian drones and Lobototons fights swarms of motorcycles and cavalry.  The Humans have Mexicans, Texas Rangers and Apaches initially, the US army will arrive later.  (we only had four players show up, Where were you Tom and Thomas?)


Here are the briefings for all the sides.


The Martians are just minding their business trying to lay low in the desert.  Their order are to hold the power node and destroy any monkey boys that show up.  However the Martians and the Apaches have a "live and let live" arrangement in place so they are not to be killed.


The Apaches have decided that the Martians might represent some emissary from the "spirit in the sky" so they are not going to fight with them as long as the Martians leave the Apaches alone (they have enough enemies).  The Apaches are offended by the Westerners use of alcohol on their horses, do not get along with the Texicans well, and HATE the Mexicans.  However, this is the 20th Century and the Apaches have reached an "accord" with the U.S. army.  The 'Mythologizing' of Native American warriors (now that they have lost) has begun and as long as the Army does not see them actively helping the Martians all is well for this to continue.


The Mexicans heard about the power Nodes from the Americans and decided to try and get involved.  The Mexicans can not get into any trouble with the American Army, but the Texicans (if the army is not around) and Apaches (filthy animals) are fair game for a bit of butchery.  They do not know what is going on, but would love to be the ones who end up with the Power Node.


The Texicans found the Power Node and do not know what it is, but when they reported the node, the Army wants to mount an operation to try and capture the thing.  So here are the Texicans guiding the Army to their target.  The Texicans do not like the Mexicans and really do not like the Apaches, but the job at hand is the Martians. 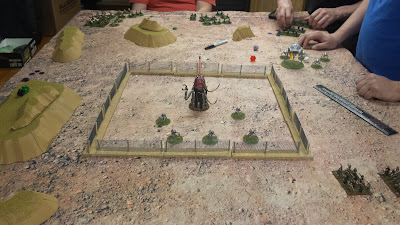 The other new figure in the game is a Martian power node.  This is located in the center of the table and surrounded by a laser fence system.  In this case the Martians are simply sitting around gathering solar power to send off to the general uses of the invasion.  These power nodes are located around the world and can also repair damaged vehicles. 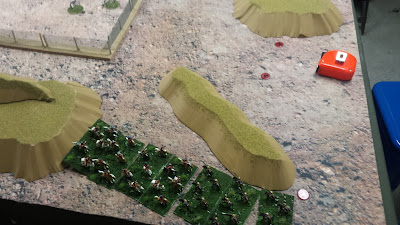 Here we see the Apache and Mexican cavalry groups prior to set up. 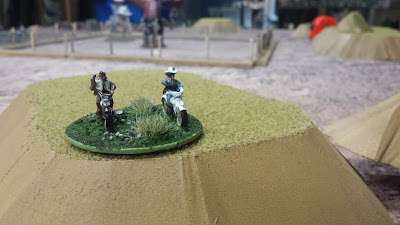 I could not resist myself as I painted the Texas Rangers and painted up their commander as the Classic American 1950's TV show "The Lone Ranger" and his faithful friend Tonto.  I even managed to get a mask on him! 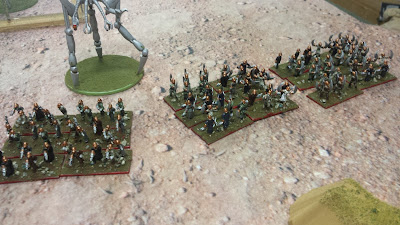 I kind of went overboard and bought some extra Lobototons (it was a good deal).  The batch on the left are the 'blasters' equipped with a gun.  The group in the middle and the one on the right are both 'slicers' equipped with grafted on blades. 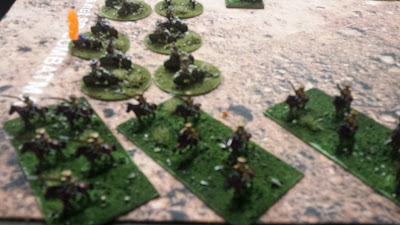 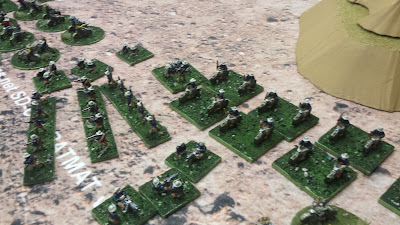 The picture is from later in the battle when the U.S. troops arrived.  For variety sake they are painted as Spanish American War/Phillipino Insurrection era American troops and I plan to use them as Marines or State militia/national guard.  The motor cycles are in the back, Heavy Machine guns in the front, the infantry are behind them and some light mortars further back with some drones in the way back. 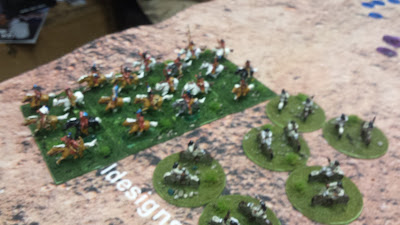 Here is a close up of the Apaches.  They get an extra stand of Cavalry. 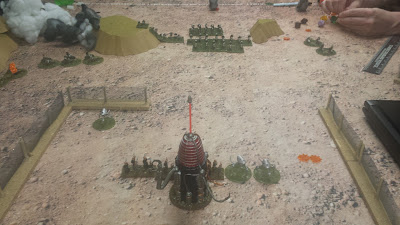 These pictures show the Martian set up inside the compound. 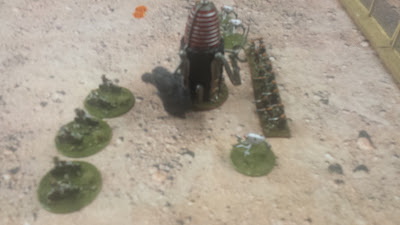 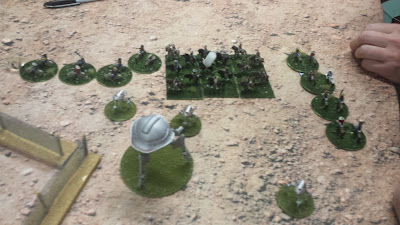 After a few turns of movement as blips, the Texas rangers started their engines and raced toward the fence line.  The martians responded by having their forces outside the fence (a slaver tripod and most of the drones) 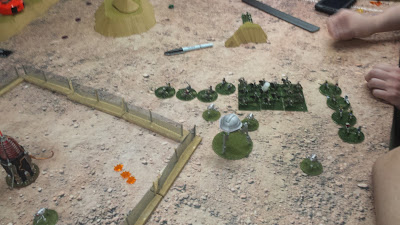 Honest Dan and Justice and Rule began a swirling fight that ranged over about a third of the board.  Due to HOT dice Honest Dan got the better of things and began wearing down the Martian forces. 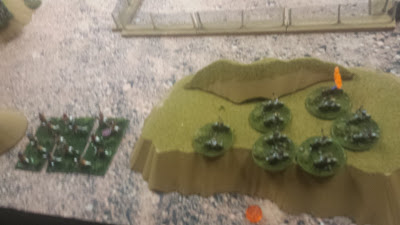 Meanwhile the Apaches (Garrie) and the Mexicans (Anton) climbed into the proverbial "phonebooth" and proceeded to have a knife fight.  The Apaches first exposed all of the Mexican blinds then started attacking the Mexican Federales (The Apache orders were to destroy everyone else's cavalry as the Apaches are offended by the western trick of getting the horses drunk so they will approach the Martians, and also to minimize casualties one out of two is not too bad is it?) 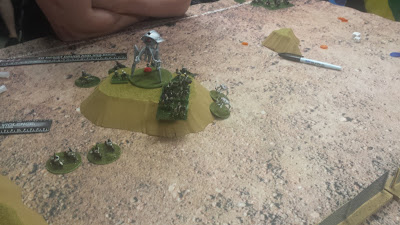 The swirling battle between the Texicans and the Martians culminated with the violent explosion of the Slaver tripod which destroyed the last of its drones and most of the Texican troops as they were too close to the Slaver.  The only thing that survived was the a few stands of motorcycles which had been dynamiting the laser fencing to prepare the way for the Army assault.  The moment before the explosion is above and the moment after below. 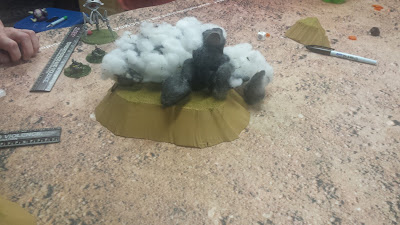 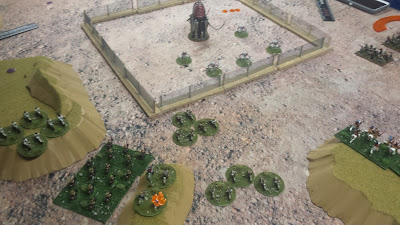 Meanwhile Martian Reinforcements arrived in the form of a Scout tripod which had been patrolling in the area.  The Scout walked in sweeping away motorcycles and trying to defend the power node. 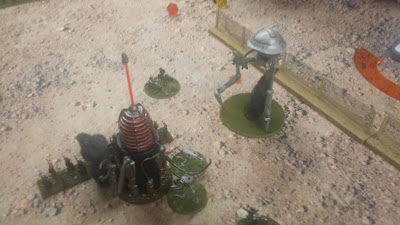 However, (as seems to happen very frequently in this game) a lucky shot from the Lone Ranger (the last stand of the Texicans) cracked the armor and destroyed the tripod. 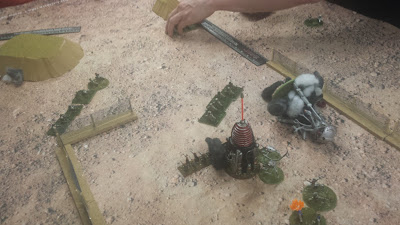 As the Americans massed up their infantry for the final push, Justice and Rule conceded the game. 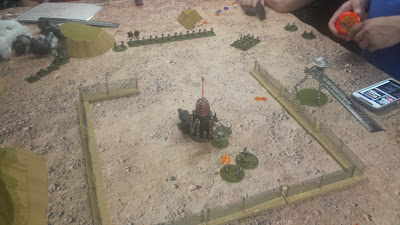 So everyone seemed to have a great time.  Everyone took their briefings and ran with them.  Odd dice rolling always seems to have a hand in the game play, but it is just for fun (perhaps a campaign in the future) so all is well that ends well.