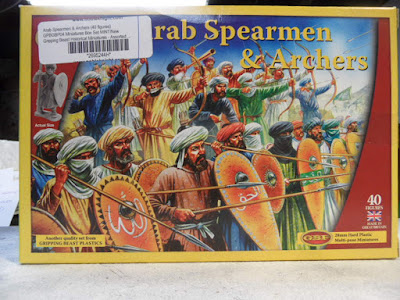 It has been ages since I did a figure review and I know this isn't a particularly new subject. This is mostly because I have toned down my purchases to try (emphasis on try) to lower the height of the mountain of unfinished projects in my basement. I have been pounding away at the Lace Wars Project but I was starting to feel that itch, the desire to be distracted. Enter my old buddy The Housemartin, he is working on a project himself and doesn't care for the fiddly process of assembling plastic miniatures. The Housemartin has known me since we were both teenagers and he knows my tendency to love any new and different project. A few well-placed comments later and I found that I had not only agreed to assemble his minis for him, I had agreed to modify some of them to have muskets and then paint them.

Enough of my ramblings and on to the review and build. Gripping Beast Plastics specialize in Dark Ages subjects and have produced other kits in the period. All of GBP products that I have seen are quite nice so I was excited to open the box and get to work. At the top of the page you see the cover art, which provides a good idea of how colorful these troops can be.Below you see the rear of the box with more painting and assembly ideas. 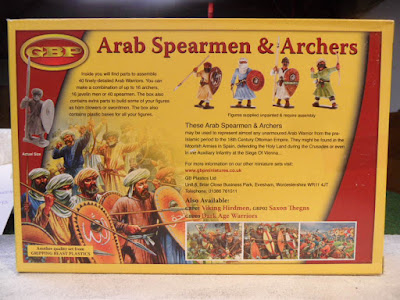 Inside the box we find eight sprues each with the parts to assemble five figures as spearmen, swordsmen or archers (although not enough parts to build all of the figures as any one type, which may be off-putting to some people) as well as the requisite sprue of bases. 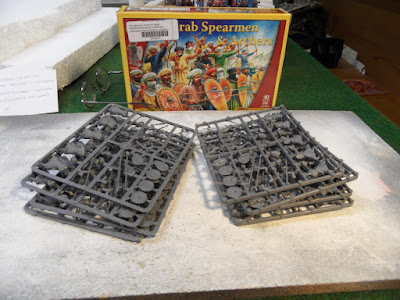 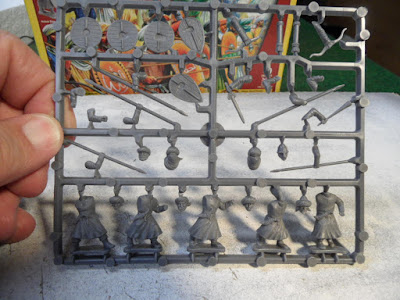 side A of the sprue 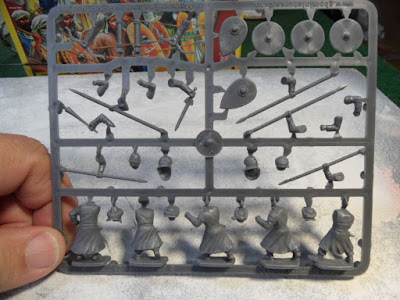 side B of the same 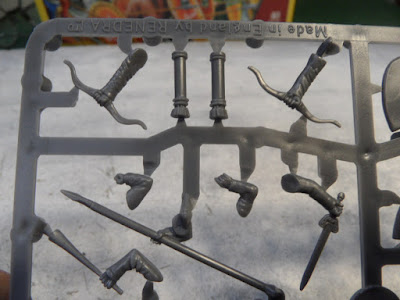 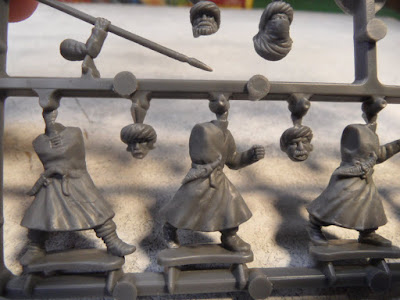 and some solid active poses ,
and a good selection of characterful faces 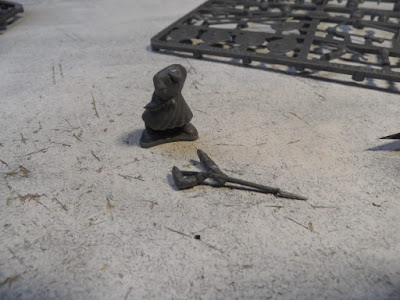 and now to the real work at hand; Wargames Factory Lace Wars arms and musket (their WSS Infantry set is a wonderful source of spare parts) it took a little trimming to get these to fit 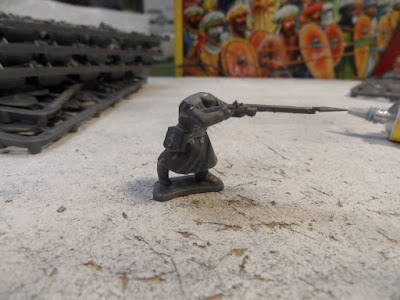 once the chest had been trimmed to accept the arms in a forward-reaching position things went together just fine, a dab of old-fashioned tube cement helps hide the small gaps that remained 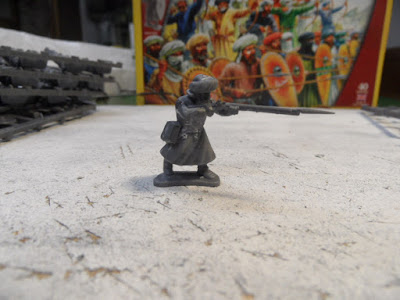 when I added the head it looked almost perfect, the pose seemed natural and the head lined up perfectly with the barrel of the gun. I had carved away the dagger in the figure's belt earlier and attached a cartridge box to his hip in its place 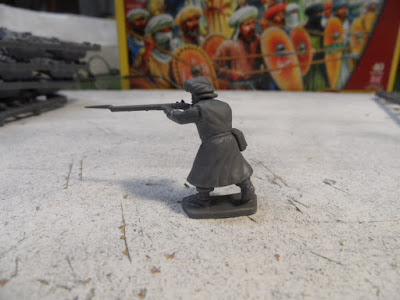 just a small gap at the shoulder to fill 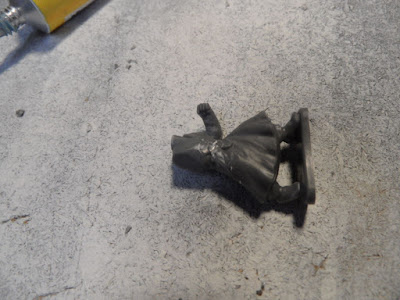 there are five different bodies in the Gripping Beast kit
so I decided to try a different pose
once again, he loses his belt dagger to make room for a cartridge box 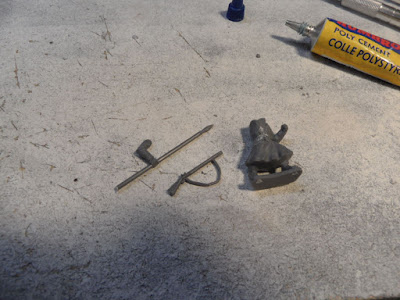 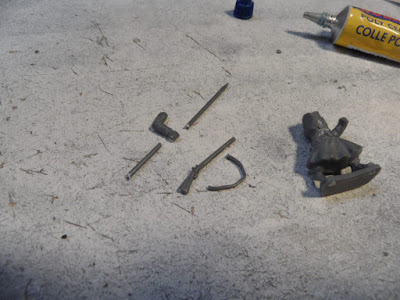 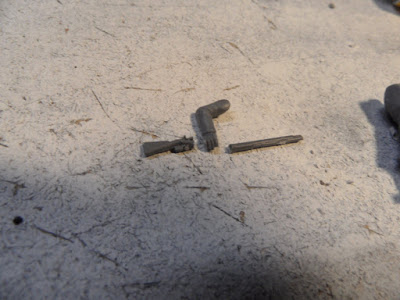 then I carefully cut the musket in half 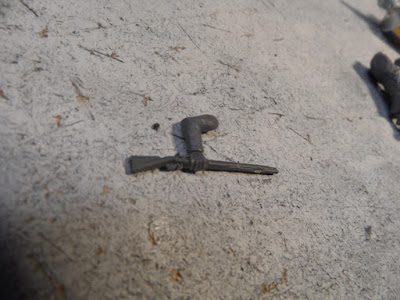 and attached it to where the spear was, careful checking as the glue dried made sure that the gun stayed straight and lined up correctly, this is one of the main reasons that I love plastic minis there is simply no way that a metal model would stand up to use after such surgery, plastics are solid as soon as the glue dries 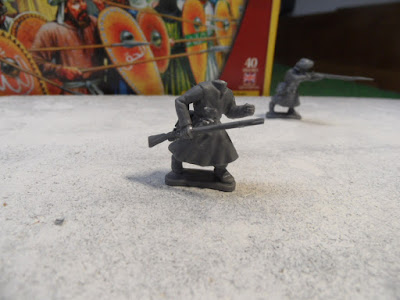 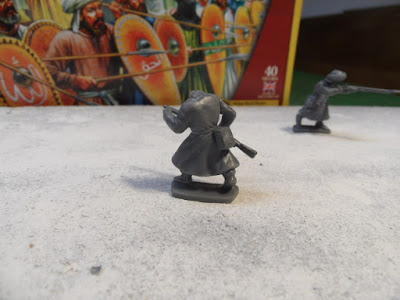 hurrying to the next bit of cover to take aim.....
I'm thinking of adding a ram-rod to the empty left hand 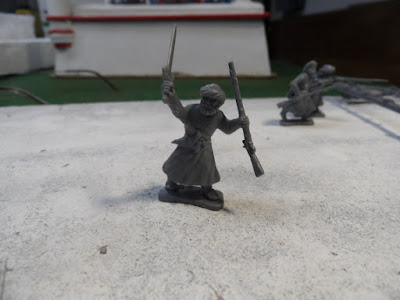 every unit needs some wacko shouting orders and waving a sword around so I made this guy; the sword arm is straight out of the box and the musket was added to his empty left hand using the technique shown above 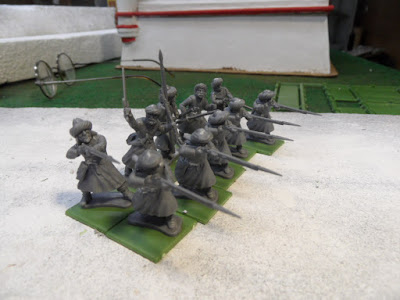 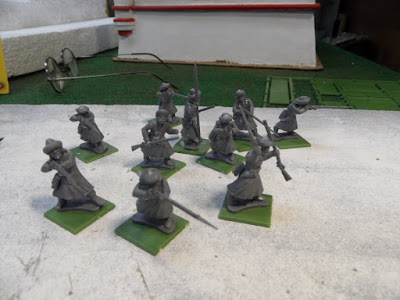 but their natural status is a cloud of skirmishers 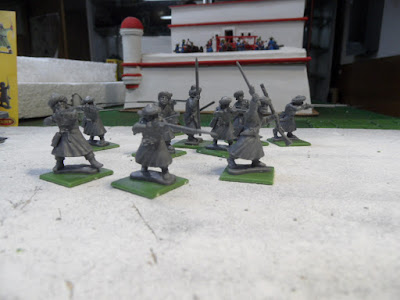 I really like the Gripping Beast miniatures; they are simple, solid models cast in a soft easily worked plastic with excellent detail. The Housemartin has me conned into building and painting some other foot and a unit of cavalry so you will be seeing more of these guys pretty soon.

I highly recommend this set (and any other Gripping Beast plastics).

END NOTE: anyone wishing to undertake such a conversion and not wanting to spend a fortune on the Warlord Games re-issue of the old Wargames factory War of Spanish Succession infantry  just send me an email at daftrica89@yahoo.com (put "WSS musket" in the subject line) I have a limited supply of left-over parts from my Lace Wars Project and I will happily mail them to you.
Posted by Anton Ryzbak at 11:07 AM