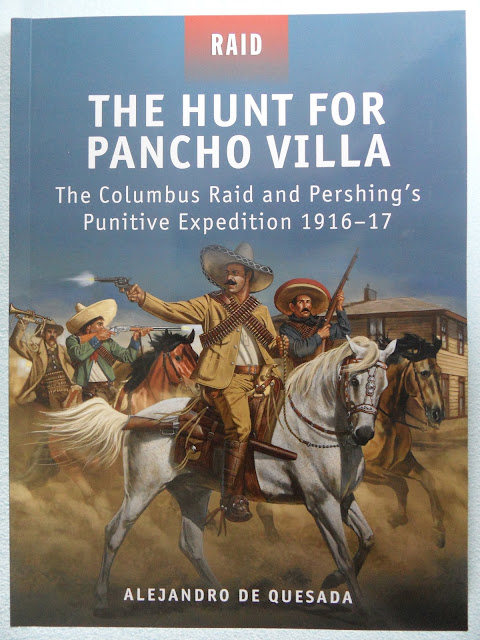 
I have run hot and cold on the Raid series from Osprey as I am simply not interested in most of the subjects. This one is quite different; I have always had a soft-spot for this little conflict (probably since I saw that B-Western - starry Telly Savals - Vendetta) and have also had the pleasure of speaking at length with two people whose fathers were members of the Punitive Expedition. This book lays out the events in a fairly even-handed way after spending (and very well spent) a few pages setting the scene with pertinent background information.

The text is scattered with crisp and clear period photos (a good many which are new to me) and features some current color shots of the locations as they stand now, the battle maps are excellent (but not credited, which is a shame, the person behind the work should get kudos)  and the artwork is first-class (again uncredited, but at least they list the artists in the inside cover).

On the downside the horrible maps that seem to be a recurring feature of the Raid and Campaign series have appeared again. My contacts with the American Southwest and Northern Mexico have been decidedly limited but I can assure you that it is not a vast lime-green plain that spreads between two pale-blue oceans. Why Opsrey wastes time, ink and an entire page on such rubbish is beyond me. When recounting military operations the terrain is a critical issue for both sides, why would anyone think that a map that consists of an outline of the coasts with a few dots for cities and some squiggly line for roads is an adequate representation of a theatre of operations is utterly beyond me. Worst of all there is another equally bad map that takes up most of an entire page later in the book.  On the other hand they have done away with the pestilential chronology that has eaten up so many pages in other Osprey books by notating important events in the margin of the page to which it refers. This is an excellent feature and makes using the book as a reference much easier. It should be applied to all Osprey products.

As a primer this is a very good way to gain an understanding of a much talked about but little understood event. The bibliography is good, but leans heavily on English-language sources. This could be used to set up an interesting short campaign, but you will have to get hold of some decent maps before you start.

Very Highly Recommended (except for those crappy maps!),   John
Posted by Anton Ryzbak at 3:05 PM