At this rate I will never get these done. While building a Dragoon unit I was once again bitten by the figure modification bug. No longer happy with just changing a pose slightly I started cutting up the arms and hands that are provided, searching through other kits for arm in different positions and generally burning through a ton of time coming up with new and different poses for the figures. In the end I have a unit of Dragoons, no two in the same pose, but still a unit of Dragoons.  I think the next unit will all be posed exactly the same, just to move things along a bit faster. 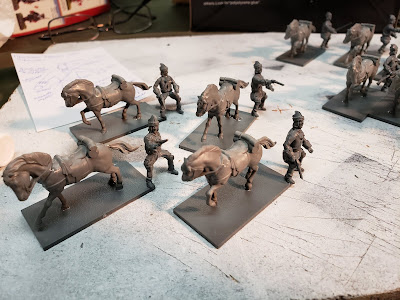 pistoleers; all but one have had significant surgery 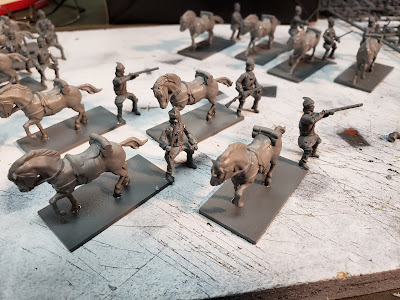 musketeers; I nicked the firing position arms from an Infantry box
and used the standard-bearer's left arm to grasp the musket for the other two 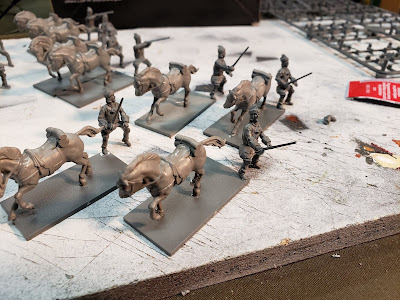 swordsmen; I had to have a few of these guys just to keep Stew happy,
they look less than confident because they are dragoons not real cavalry
and they doubt that the odds favor them

These are French Dragoons and will be painted either green with yellow facings or yellow with bright red facings......I haven't made up my mind just yet. I might also pirate a few figures from an infantry set and build the dismounted version of these lads, time will tell.
Posted by Anton Ryzbak at 1:59 AM