Strange things on the telly, is that a pink T-72? 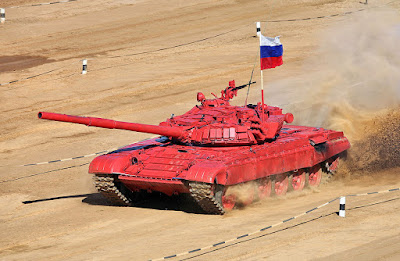 With an hour to kill and feeling to lazy to descend into the workshop or get a book to read I found myself channel-surfing. Flicking listlessly through the channels I suddenly found a title that tickled my fancy "Tank Biathlon". I figured I would watch it just to pass the time. As I watched it I was stunned by wide difference of results from over a dozen different teams all driving the same tank, a Russian T-72B3 (except that China drove their own  Type 96A). Skills included driving, main gun, coaxial MG and pintle mounted AAMG.

These were the very best tank crews all from countries that operated the T-72 as part of their arsenal so the difference wasn't from lack of familiarity. I spent some time thinking about the huge gap between the performance of the "very best" crews from these different countries (the Kuwaiti team apparently managed to forget to downshift when climbing the hill and stalled their tank) and then considered just how wide a gap would exist between these elite crews and the average soldiers. You can find the video on Youtube

Intrigued by such goings-on I dug around and found that NATO has been doing pretty much the same thing with the Strong Europe Tank Challenge (major fail in the marketable program title department!) which you can see here.

Now I think that my rules should include such "ace" crews in some way. I begin to understand such skilled warriors as Wittman and Carius.
Posted by Anton Ryzbak at 7:36 PM