To the Blue Foam Beyond.....World War One trenches in 20mm UPDATED

Have you ever had one of the those moments when you say something and then think twice as soon as the words leave your mouth?  That sort of thing happens to me more than I would care to admit. My current situation is the result of one such moment; during a game Joe and I were talking about one of my favorite periods, The First World War, he stated that he was currently painting 20mm figures for the war and, aware that I had quite a collection of First War minis in 20mm, asked about a certain model. At that point I said that if he was going to paint the minis Iwould build the terrain (I very much prefer building terrain to painting). I had made many similar offers in the past (even going so far as to give the  minis to other players if they would undertake to paint them and bring to games) with very few takers. I thought I was safe.

Well, in a few weeks Joe showed up at another game with a box of painted British soldiers and four Mark IV tanks. I knew I was had and the next day went to Lowes and bought a couple of pack of foam insulation to start on the terrain. The very next day Joe showed up again with a pile of blue polyfoam insulation off-cuts from a job that his company is working on, these were destined for the dumpster when Joe rescued them. Swiftly casting aside the white styrofoam I began to arrange the peices on my game table to see how they fit. I quickly found an arrangement that covered the table but still allowed for some variety, the stage was set. 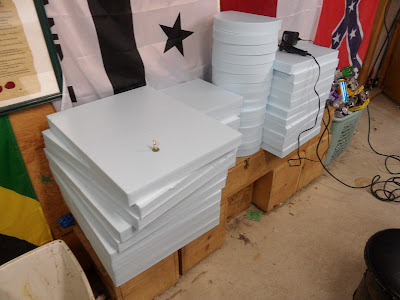 there really is quite a lot of the foam 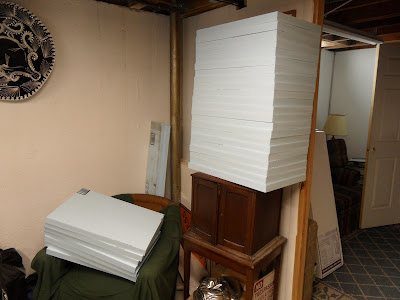 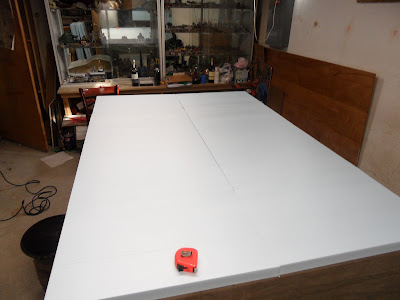 this nicely covers the table, split down the middle,
with 15"x24" sections on both ends
while there are two 24"x48" sections of "No Man's Land" in between 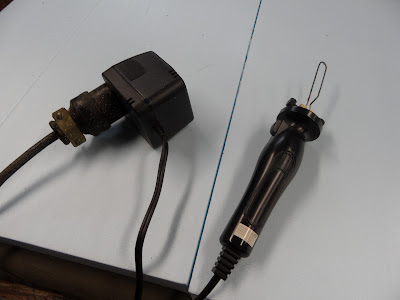 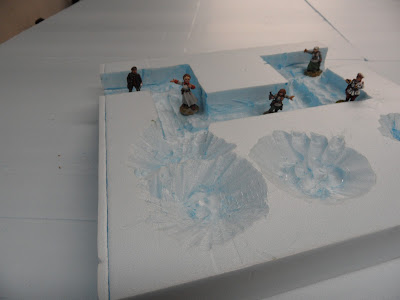 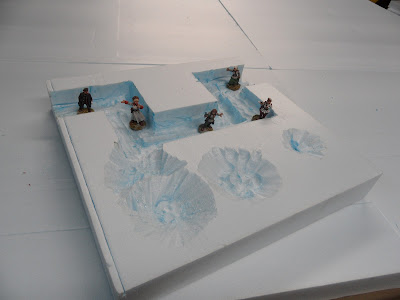 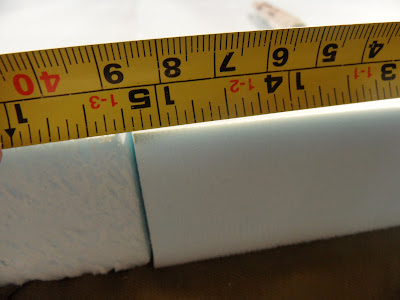 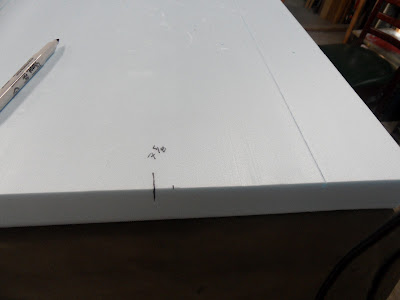 but my math skills were up to it 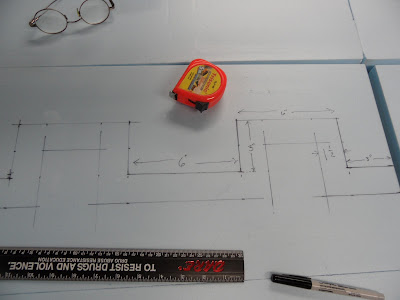 I quickly laid out a German style trench line,
those drafting classes in high school are finally paying dividends 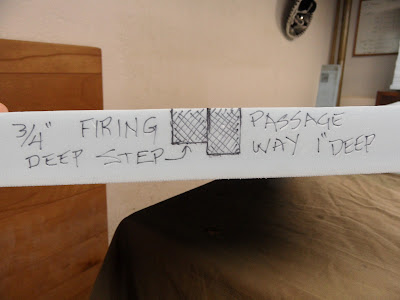 but the problem was how to cut  the trench profile with my cutter,
I had run into problems making the test sample as the tip of the cutter is rounded 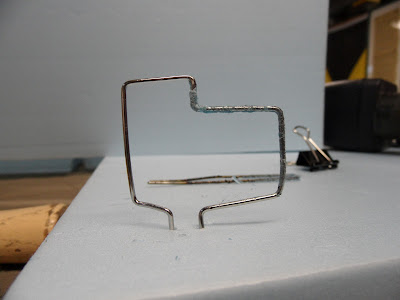 so I made my own out of a large paperclip 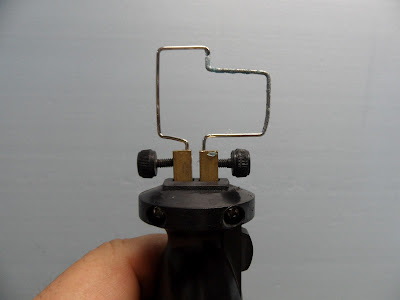 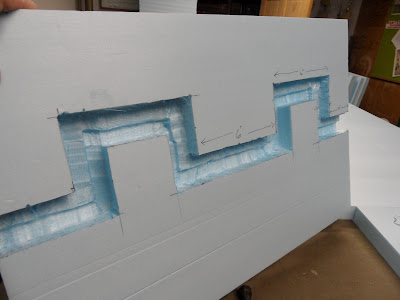 but in the end things turned out OK 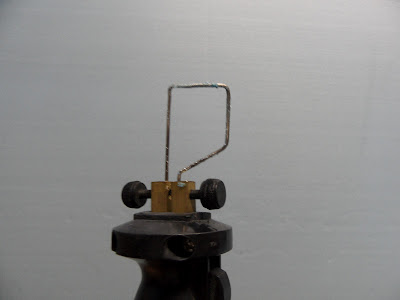 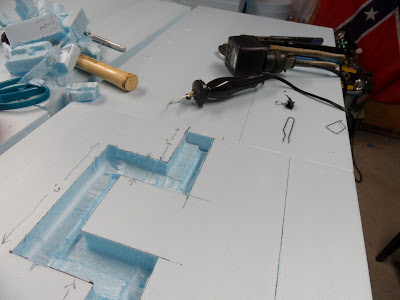 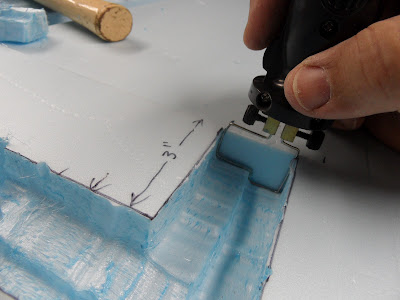 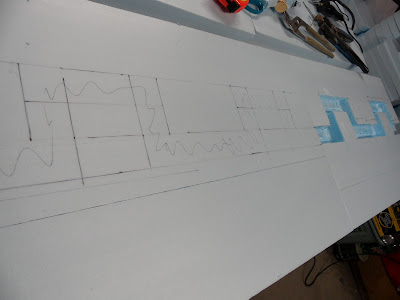 a third panel quickly was sketched out, layout got easier with practice 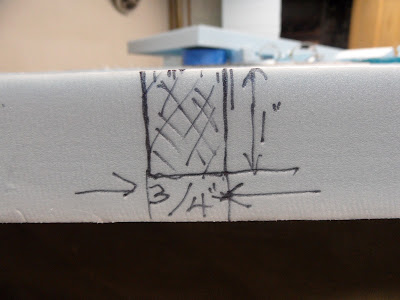 communication trenches had no firing step 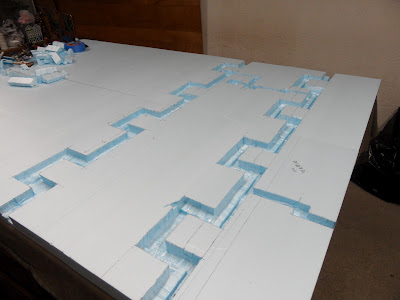 four panels laid out together,
I will probably make at least two more to add variety 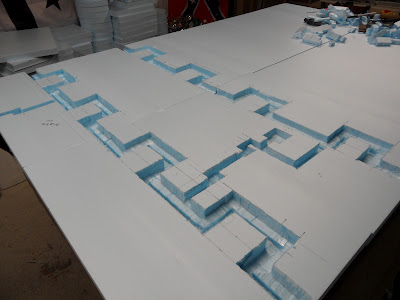 I made an MG pit and added more communication trenches 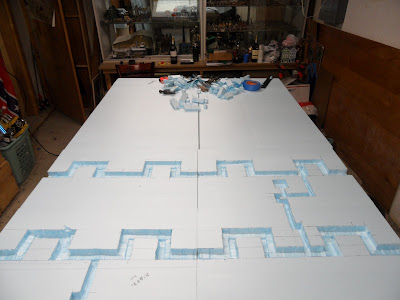 step one finished, now I need to get started on the shell holes 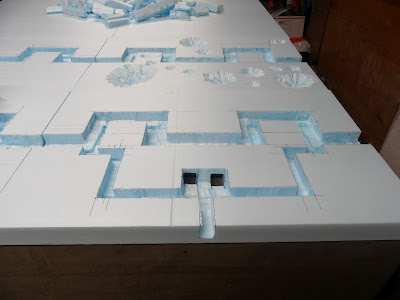 I had some extra time this afternoon so I made two more panels,
one has a deep bunker the other is just a section of trench 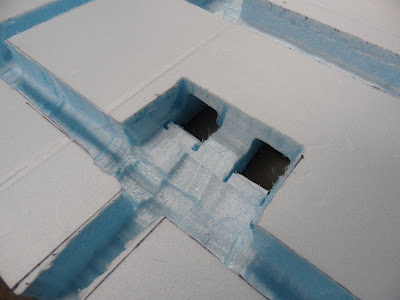 the bunker passageways go entirely through the panel 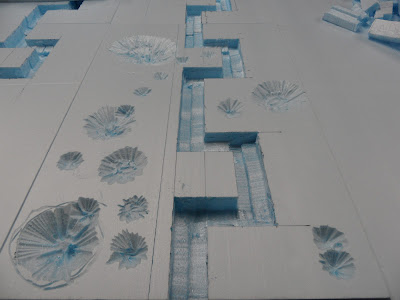 the new panel also got the shell hole treatment, no quite happy with it yet,
needs more holes but I have to leave the surface playable
All-in-all this was easier than I had thought it would be. I am now faced with cutting several dozen shell holes into the foam. I am certain that the harder task will be to figure out how to make the shells holes line up in a way that leaves the panels geomorphic without having odd empty strips along the join lines. I also need to get some good shots of British First War trenches, I understand they were far less formal than the German ones. If anyone knows of good pictoral sources please add it in the comments section.
Posted by Anton Ryzbak at 12:20 PM

New comments are not allowed.