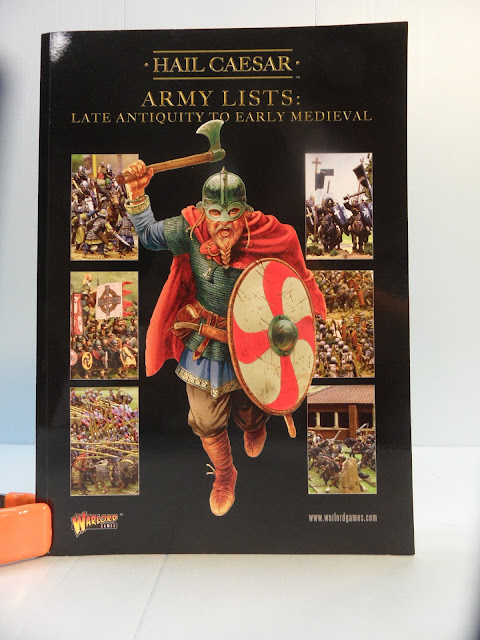 I had mixed feelings about the idea of the release of army lists for the Hail Caesar rules, the rules sem to have been written with a complete disregard of competitive gaming and now they were releasing lists. Humph!

I am pleased to say I was wrong, I can't imagine why anyone would try to run a tournament type game using these rules but these lists will probably not appeal to that mind-set anyways. What we have here is a set of army lists with troop-types and special rules (and the unavoidable points) for the period of the third century AD through the thirteenth century AD.

The physical presentation is up to the usual high standard of Warlord Games products with a slick, sturdy card cover and thick glossy pages loaded with pictures of superbly painted minis.The sixty lists are arranged in chronological order and presented in an easily understood way with the balance of troops stated first and then the names and stats of each troop listed below with the applicable special rules noted. This makes assembling an army a fairly easy process, although some understanding of the rules is needed to ensure that the player makes the right choices.

The lists present the historic troops balance of the prototype army and set parameters for how many and what type of troops may be included. They do this in a unit-by-unit manner (none of the old-school accounting nonsense of 12 X EHC@17points ea) with certain options available to some troop types. They allow the player to assemble an army with some wiggle-room but ensure that whatever army is put onto the game table will look and act like its historical original.

I am sure somebody will have disagreements with the lists as it looks that they will create none of the winners/losers that some lists present, or that their favorite troop-type is not the "God of Battle" that they wish, so be it. What the lists will provide is the opportunity to use historical armies with their appropriate opponents using the special rules that the team that wrote the rules consider to be correct. For those less historically pure they will allow your later Roman Legions to face off against Early Hungarians in a fun game that will at least be balanced.

Recommended to any Hail Caesar player seeking guidance on his next model army.   John