And finally; Something different

The Housemartin long ago learned that if you leave things on my workbench they might just catch my eye and end up painted. Exactly such a thing happened last night. Long ago I assembled some Gripping Beast plastic Arab Cavalry for T.H. and (despite repeated reminders) he has failed to take them home and paint them. I had spent an hour or so cleaning up my newly aquired western town buildings when I got the itch to pick up a paintbrush (mind you, this doesn't happen often so I never let the urge pass). I cast around for something primed and ready to go and my eye caught on the cavalry. They are delightful figures so I did some quick research and got started. A couple of hours later I had this: 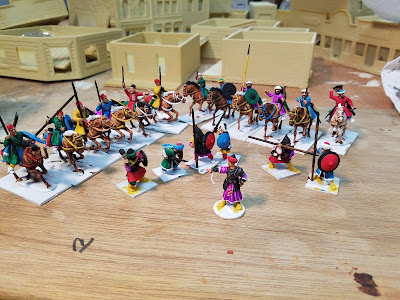 a few infantry crept into the process as well

They have another couple of hours to go before they are ready for the tabletop. It was fun painting something that wasn't uniform for a change. Combined with the Arab foot that I did a while back T.H. has the basis for a Saga or Pikeman's Lament force.
Posted by Anton Ryzbak at 12:23 PM