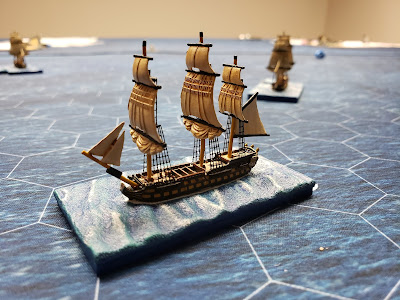 as always with R.U.P.s games, the models were beautiful

Rich Uncle Pat (R.U.P. henceforth) invited us all to his new house to play a game of Close Action. Set in the period of the American Revolutionary War this game featured those all-time nautical heavyweights; Spain and Portugal. To get an idea of just how lowly they were consider this; on a scale of A through G (A being the best) my Spanish sailors entered the game as "E" rated, the far more ferocious Portuguese began as "D" or "C" rated sailors. Truly a battle of the naval midgets of the time. It does make for a much more interesting game as managing your crews morale becomes a serious consideration (and you lose more Victory Points for a ship striking that you would if it just ran away). Let us see how events unfolded. 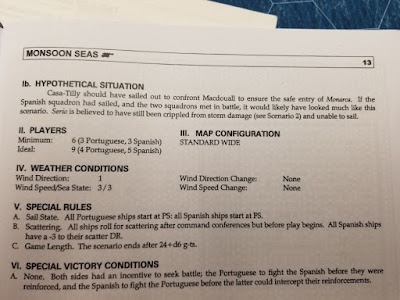 the scenario from the rulebook 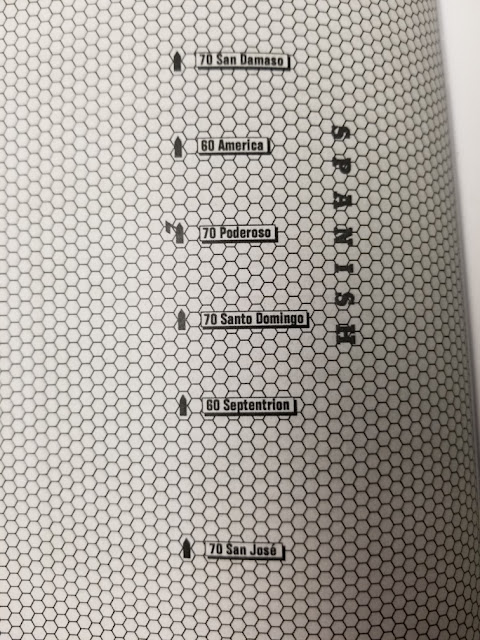 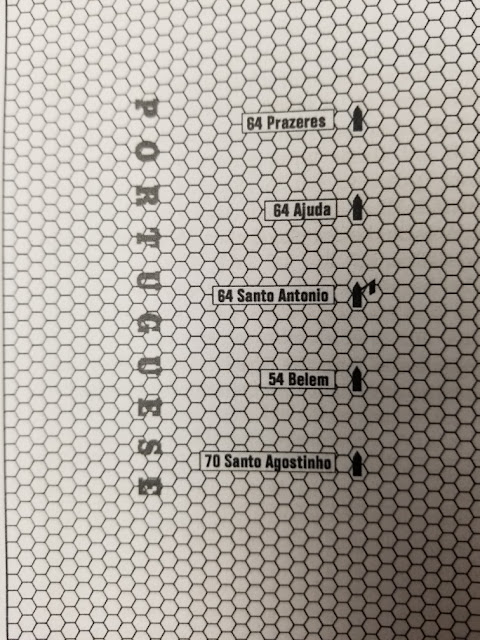 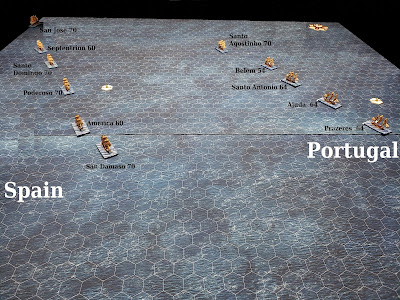 even with the scatter (which simulates pre-battle maneuvering)
things looked rather tidy at the start, the Portuguese began with the weather gauge and more sails set (poor crews take longer to do thing such as set and lower sails so the Spanish started at battle sail) 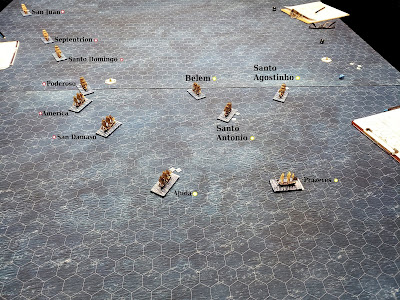 our Spanish plan was to fall off to windward as we tried to close the gaps in out line, the Portuguese opted for a far more aggressive approach as they turned to crush our lead three vessels
(yellow dots are Portuguese, red Spanish) 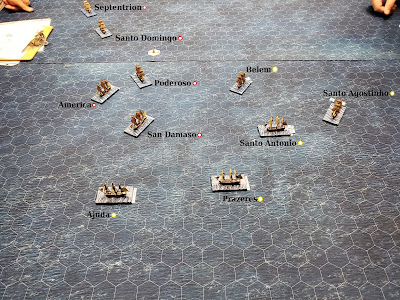 the faster Portuguese ships quickly turn the end of the Spanish line forcing us to curl to starboard to avoid being raked, the Ajuda began its circumnavigation of the Spanish fleet that would see it trade broadsides with nearly every Spanish vessel 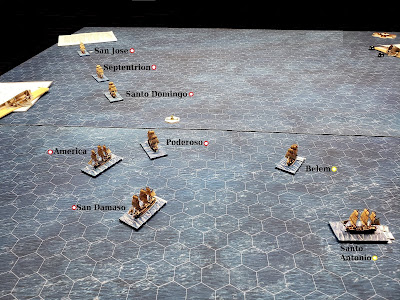 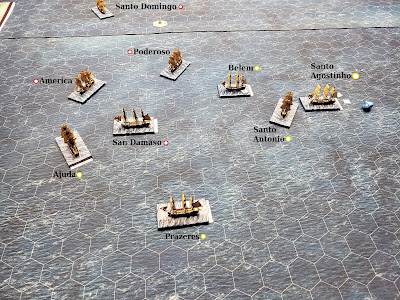 the San Damaso was quickly being surrounded by the swift Portuguese fleet,
the America and Poderoso gamely broke with orders to try to save her
the Ajuda raked the bow of the San Damaso
while the two Santos (rear of the Portuguese formation) began the first of several near-collision moves (collisions and fouling are disastrous under these rules) 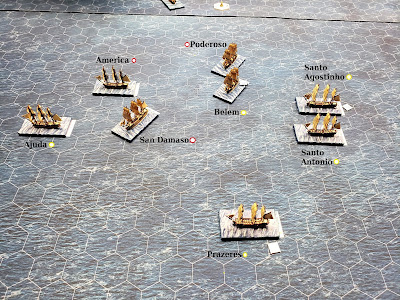 with help now at hand the San Damaso turned to close with the Prazeres
as the America sought battle with the Ajuda and the tiny Belem brazenly took on the Poderoso,
the Belem would spend most of the game in the center of things leading a strangely charmed life 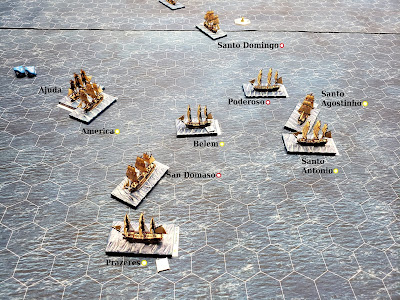 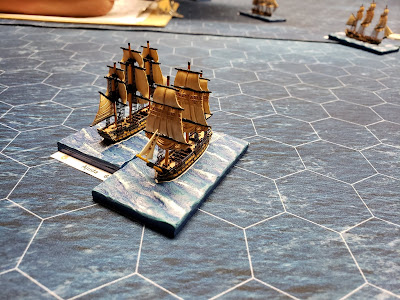 a close-up of the exchange between the Ajuda and America
I plan on asking R.U.P. to do a tutorial on his painting technique, these models are delightful 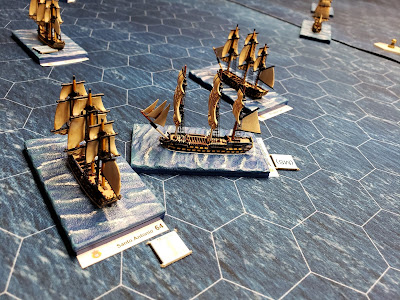 you can almost hear the swearing on the quarterdecks,
the game does not allow conversation between players on matters of tactics,
very limited signalling is allowed and then only at the end of movement
collisions between friends is a real risk 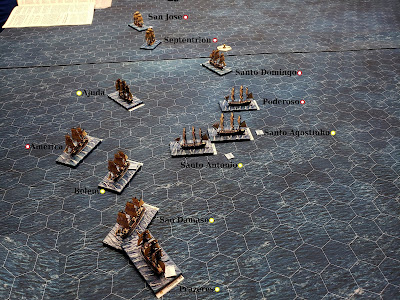 in the far distance the rest of the Spanish fleet finally joins the battle as the Ajuda speeds off looking for new friends to play with, the Santo Agostinho traded shots with Poderoso, the America fired at the Belem and got as good as she gave, at the bottom of the frame we see the San Damaso getting rammed (unintentionally) by the Prazeres which allowed her to bow-rake the Portuguese ship while taking no fire in return, the ships did not foul but the Prazeres took significant sail damage 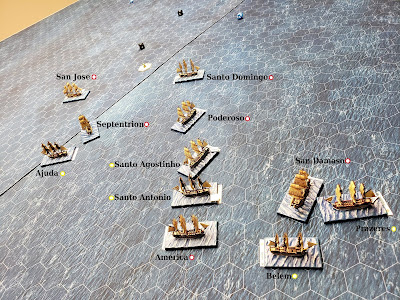 with the San Damaso now stationary the Belem raced over and delivered a bow-rake, the America traded shots with the Santo Antonio while the Poderoso contined to fire at the Santo Agostinho and the Ajuda fired upon the Septentrion 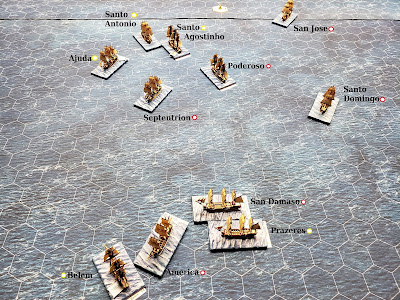 as the Belem reversed course to deliver another bow-rake on the San Damaso the America cut in and  suffered the damage instead, at the same time the America delivered a bow-rake to the Prazeres while the Prazeres and the San Damaso pummeled each other at point-blank range,
in the distance the Ajuda and the Septentrion blazed away at one another
the Santo Antonio has reversed course to return to the fight
and the San Jose and Santo Domingo begin to close with the action 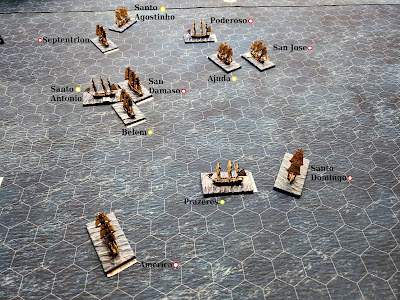 the Prazeres had to loose its sheets to avoid running into the America so ended up stationary again and getting stern-raked by the Santo Domingo while the now bloodied San Damaso moved away looking for safer quarters,while fleeing from the relentless Belem she found herself in a position to deliver a stern-rake to the Santo Antonio, in the distance the Ajuda was exchanging fire with the San Jose and found herself being stern-raked by the Poderoso, the Septentrion got a bow-rake in against the battered and burning Santo Agostinho 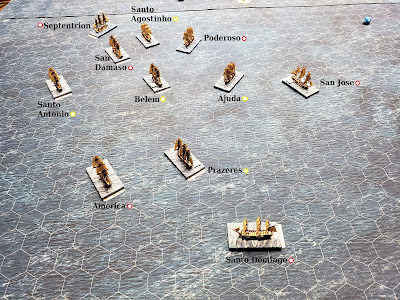 suddenly there was break in the close action and all the ships were sailing free,
the America fired at the Prazeres and got fire in return as the Santo Domingo fired ineffectually at the Prazeres stern, the San Damaso, still dogged by the persistent Belem and, with a crew on the brink of striking the colors, was fired on by the Santo Antonio and the flaming Santo Agostinho the San Damaso fired at the Santo Agostinho as did the Septentrion and the Poderoso
on the right the San Jose and the Ajuda parted ways but exchanged one last bout of fire 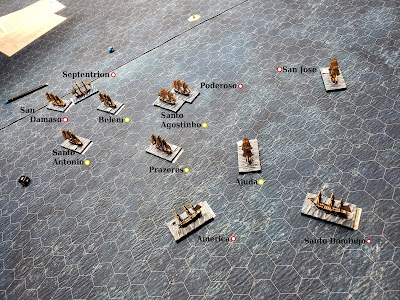 as the Santo Domingo, the San Jose and the America all turned to get back in the fray the Ajuda found herself torn between a bow-rake on the Santo Domingo or a stern-rake on the America, the America fired at the rapidly departing Prazeres, the Poderoso and the now fiercely burning Santo Agostinho battered each other at short range, in the distance the Septentrion bow-raked the Belem  as the San Damaso bent on extra sail in an effort to escape before she struck colors


At this point the Portuguese Admiral gave the signal to break off the action due to the battered condition of his ships. The Spanish gave a collective sigh of relief as they were all-to-well-aware of the ruinous condition of their own vessels. After-action assessment of Victory Points gave the Spanish a narrowly winning draw. The rules gave a fast-playing game with plenty of nautical meat for ship fanatics among us to chew on. The manner in which crew performance degrades as their morale falls is important and means that the commander has to try to manage his ship like an organization of men rather than a robotic entity. I found the game very satisfying (particularly as I finally managed to wrap my head around hex-based movement and didn't run into anybody this game).
Posted by Anton Ryzbak at 8:27 AM