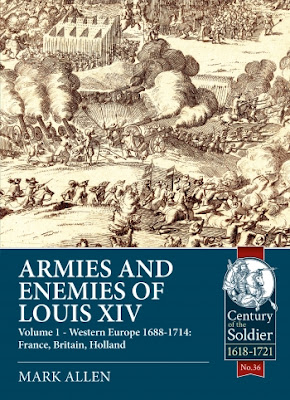 I was instantly familiar with the contents of this book as it was published i a long-running series of articles in Wargames Illustrated Magazine between 1990 and 2003. Frankly I was overjoyed as this saves me the trouble of recovering the back copies and finding the relevant articles in my depository of magazines (it also saves me the lost time of sitting and reading off-topic articles on the adjoining pages!). This isn't a book for a casual read, it is set up as a reference volume and is so densely packed with information that there is no room for florid text. The book concentrates on the equipment, dress and organization of the three armies in the title.

Allen opens with a very brief description of the chronology of the War of the Grand Alliance with some notes as to the changes in methods of war that conflict saw. He then dives into the Dutch army covering its organization down to the structure of individual companies. Their dress and equipment are explored and then the roll-call of each regiment (along with the changes of command over time) with notes to the color illustrations. The illustrations may not be to the liking of some. They are drawn in a primitive, almost child-like manner, but they convey all of the details of the uniforms and provide good color references. Anyone seeking to paint a miniature army will find a flood-tide of data here.

Next the army of Britain is given a similar examination with attendant references to color plates before the French army is addressed. Here Allen breaks down the chapter into two different section; the first on the army of the Nine Years War then, in the second section, the army of the War of Spanish Succession. The Royal Troops get the lions share of the work as they had, by far, the most complex and detailed uniforms. The line troops, in their rather more pain clothes, get proper coverage but the illustrations are smaller and less detailed.

Throughout the book great attention is given to flags and standards. This being an era of lax uniform distinctions and numerous and colorful flags the intense coverage allows a gamer to populate his battlefield with many colorful flags (I also avoided painting a few regiments because their flags were just to wild to try painting!).

The physical properties of the book are standard Helion quality. Thick card covers embrace a tightly bound 164 pages of top-quality glossy paper. The text is clearly displayed and the color illustrations are true to the originals. A sturdy volume in all.