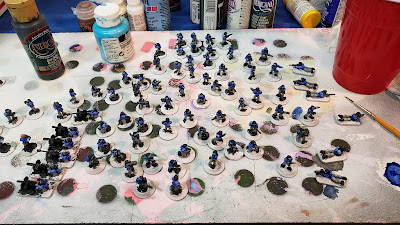 From time to time I fall victim to my mouth's tendency to say stupid things. Things like, "I could paint some of those minis for you". Next thing I know I'm painting a bunch of (very cool) figures for somebody else in the gaming group. But the mind-numbing tedium of painting hundred of tiny boots on half as many tiny figures leaves the mind to ponder the cosmos in an unfettered state. While viewing the state of reality in this enhanced level of consciousness my mind turned to the issue of galleases, particularly the scratch-building thereof. A strange thing to be considering, you say.......well I have a fairly strange mind, I reply.

The upshot of this was that (for me at least)the greatest stumbling block was making and positioning hundreds of tiny oars, a hull could be knocked together in nearly no time at all, masts and rigging a slightly longer time; but oars! Oh, those miserable oars! I thought of their symmetry, I though of their size, I thought of their parallelness (is that even a word?). As despair darkened my thoughts a tiny glimmer appeared in the back corner of my head. An Image of symmetry, an image of size, an image of parallelness. A comb. A cheap plastic comb. The kind that men carried when (unlike today) grooming was something that was done on a regular basis. With that epiphany I secured a pair of cheap combs, some balsa and a sturdy pair of heavy-duty shears; the adventure had begun! 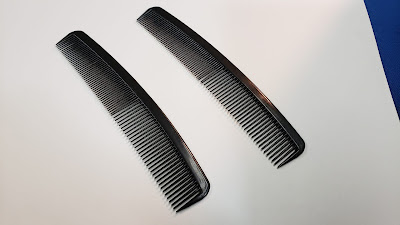 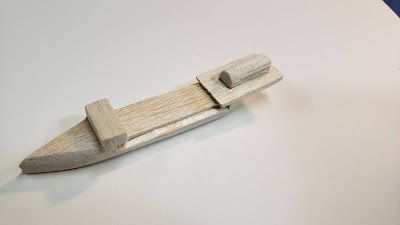 a few random bits of balsa, an Xacto knife and
some sandpaper provided this hull for the experiment 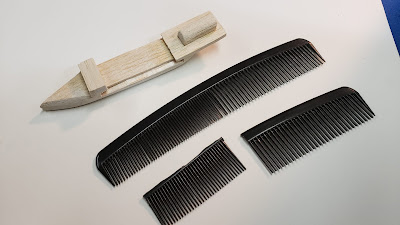 this is where those heavy-duty shears come into play, you have to cut the
fine teeth away from the rest of the comb, trimming the backstrap was the hardest part 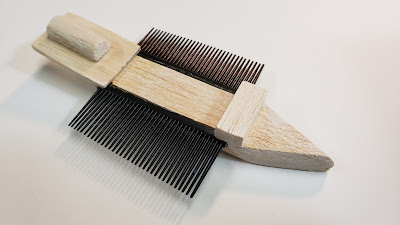 then just pop them into the slot in the side of the hull,
a couple of dots of hot-glue are probably in order

Frankly, I am surprised at how well this worked. I threw the hull together in a few minutes using my (faulty) memory as my guide so there is likely some work needs doing there. This certainly seems to solve the oars issue. Now all that is left is figuring our how to make all the other little bits and bobs on a 1/350 scale boat, that might just slow things down a bit.
Posted by Anton Ryzbak at 2:31 AM