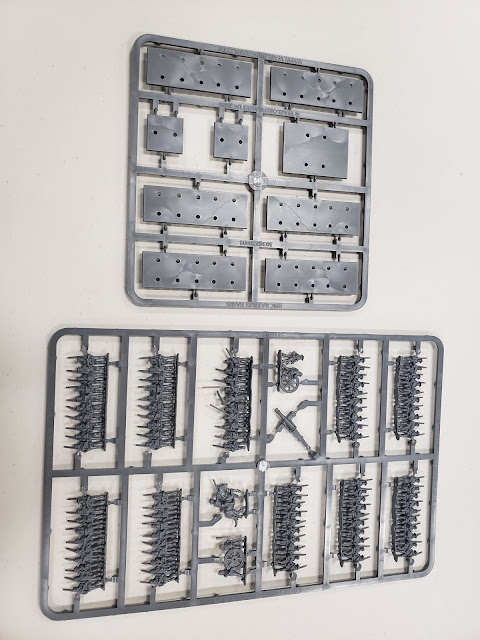 beautifully cast in a strong gray plastic
When I picked up my copy of Wargames Illustrated from my local Brick&Mortar I found sealed in the bag a sprue of the new 13.5mm (?) size ACW minis from Warlord. I had heard of these and was interested in how a "block casting" of figures would appear in the flesh. Honestly I'm impressed, the figures are grouped together well, the casting and detail work is excellent and the idea of being able to crank out large number of troops in easy to handle blocks is very appealing. In effect they have reproduced in plastic the Paperboys cut-out soldiers (minus all that folding, gluing and scissors!)

Frankly I'm puzzled, this is clearly the result of a lot of thought and work on the part of the sculptor and the casting company so why on God's earth would you make them in 13.5mm????? Warlord has gotten into a rut of making off-scale games but when you are bringing an innovative product into a VERY well established period the last thing that you want to be is the odd-man-out. This product won't penetrate the 18mm, 15mm, 12mm or 10mm markets; ACW is already over-served for sizes/scales. If the accompanying rules are a breakthrough players will just use existing armies. I can't see gamers pitching huge existing collections just on a whim because the minis are nice.

So this is a Hit and a Miss; a Hit on the quality and innovation and a Miss on trying to carve out some weird niche market in an already overcrowded scene. 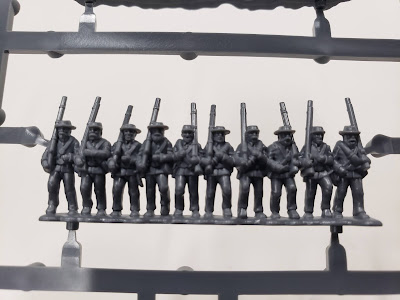 the detail is superb, the troops are at close-order drill and look the part 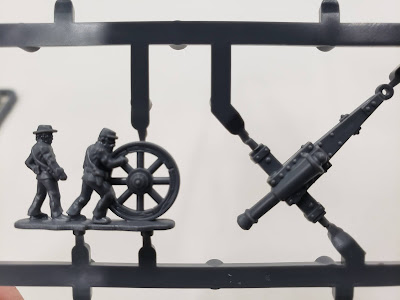 the breakdown of parts for the cannon is brilliant 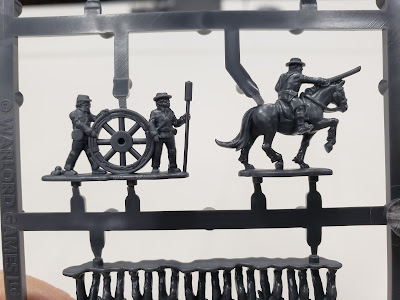 the casting is nearly perfection, no flash and I had to look carefully to see the mold-lines 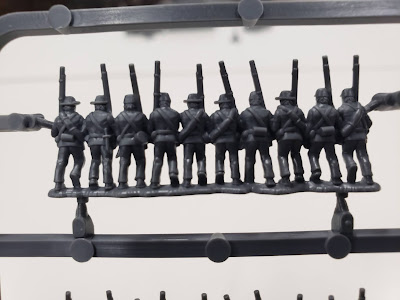 even the back of the figures are crisply detailed

If Warlord had brought these out in any established scale they would have had a breakthrough level concept. No more fiddling with basing hundreds of tiny figures, never again having to deal with the corner figures on base getting bent inward (and eventually snapping off) by clumsy-fingered friends, significantly lower cost-per-figure and a great-looking product. Once again Warlord's fetish for odd sizes/scales has taken something that could have been a real asset and turned it into a likeable but awkward anomaly.

Very Nice, but unless you are just starting out and are going to be playing against another newby who is also starting from scratch this seems to be a dead-end.