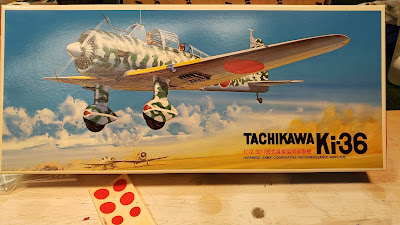 the classic old Japanese kits always had such cool box-art

After the trauma of the Airfix BV 141 I needed something simple to restore my sense of balance. I entered The Vault and randomly selected a kit (knowing that it was unlikely that any of them could be worse than the nightmare that the BV 141 kit had been) and found myself with this tiny plane as my next project. Funny how different a model can be. Both kits were of single-engine multi-place recon/light bombers and as kits and aircraft they were about as far apart as is possible. the KI-36 was a simple aircraft  of conventional design; the kit was straightforward, well-designed, finely-detailed and the parts fit perfectly. What a relief!

The real KI-36 was an army cooperation/recon/light bomber that performed satisfactorily but was outclassed as time went on. It served out its years flying over the "safer" Chinese front. A short Wiki can be found here. 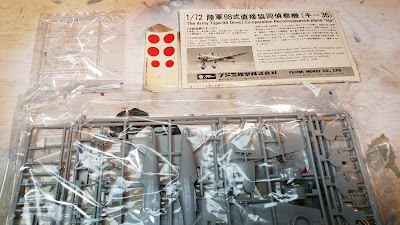 and they packaged things so nicely too 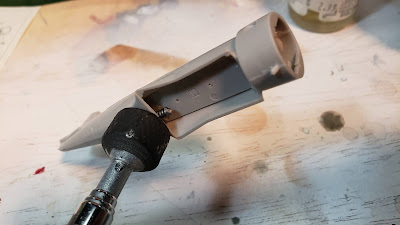 the parts fit was excellent, barely and sanding needed
I used the magnetic flying stand to hold my steel plug in place as the super glue dried 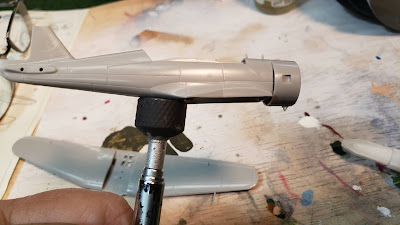 a small plane, it reminds my of an AT-6 Texan 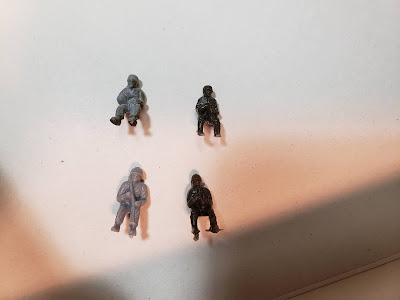 Japanese kits rarely provide pilot figures and my spares box was empty
so I was forced to convert some WW2 infantry  passenger figures into crewmen,
bottom is the starting figure, above is after some "reworking" 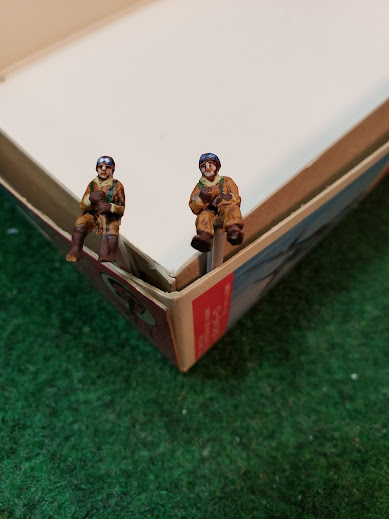 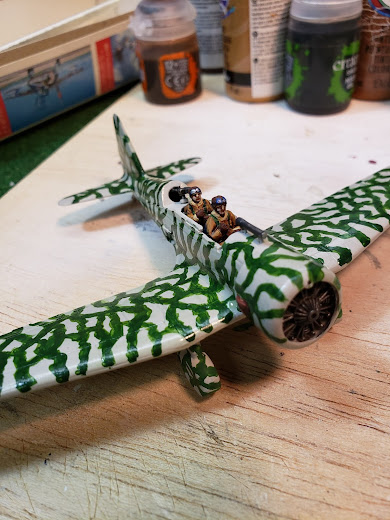 more trimming and they actually fit into the model 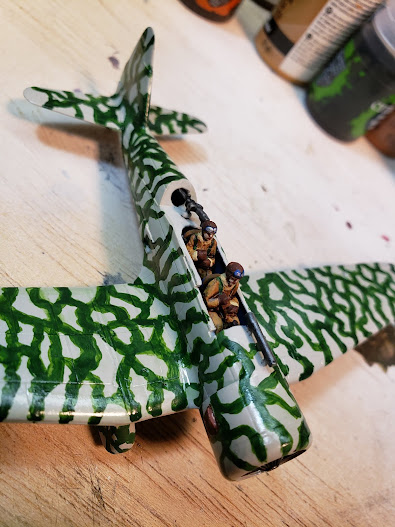 just barely, I had to trim them even more when I tried the canopy for size 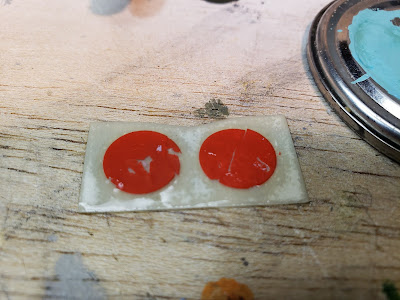 when will I learn? just because they look OK doesn't mean they will work that way
new policy is to coat ALL decals with Micro Liquid Decal Film 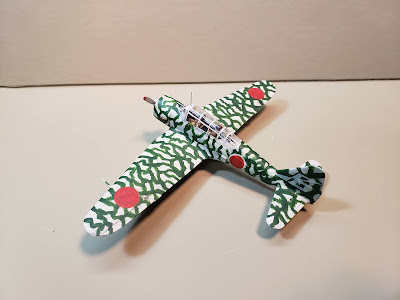 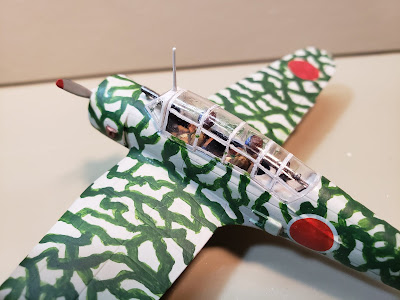 lots of glass, now I wish I had waited on better pilot fogures 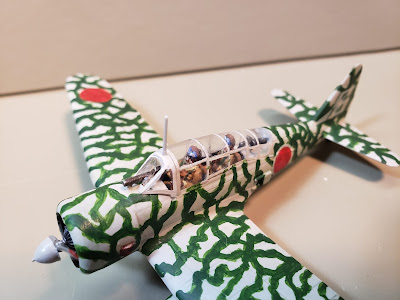 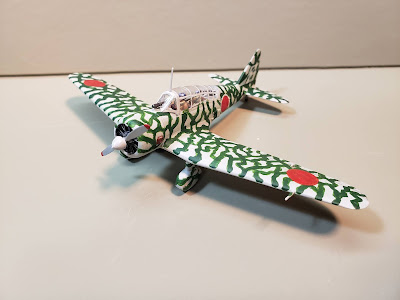 this aircraft really does remind me of an AT-6 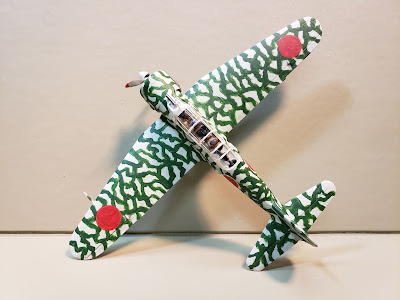 aside from the crazy paint job this was a joy to build,
just the therapy I needed after the BV 141! 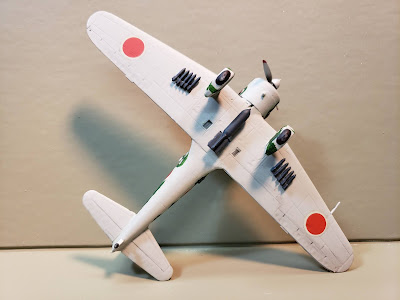 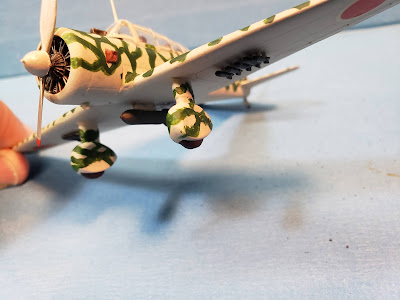 and there is the real reason I picked this kit up in the first place; spats! 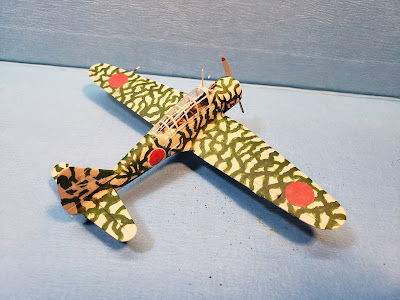 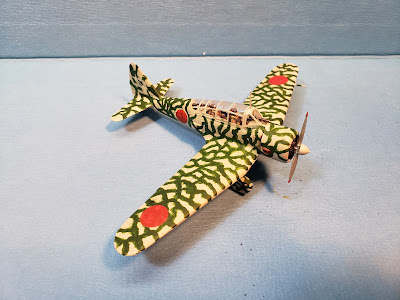 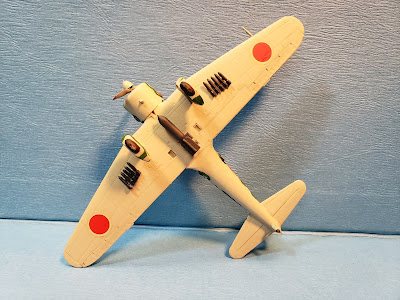 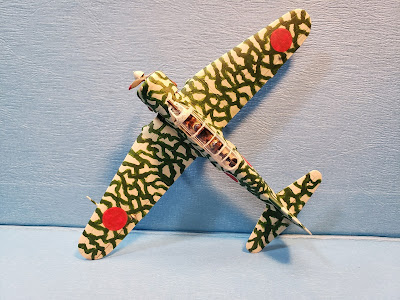 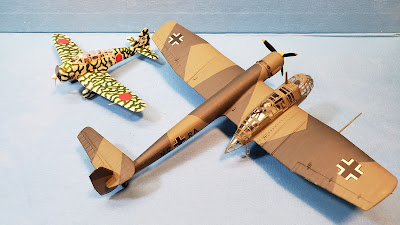 do you think that the guys at Blohm & Voss were overthinking it just a bit?
I think that I will take a break from airplanes for a bit. I feel the itch of a scratch-building project coming on; maybe a ship or some outlandish terrain.
Posted by Anton Ryzbak at 4:11 PM