What is that THING!?! 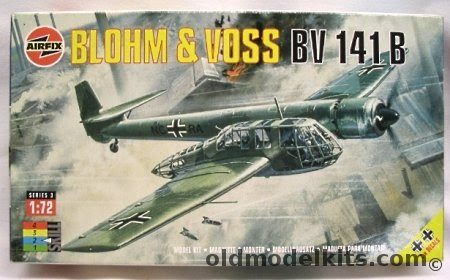 mine was all marked up with sale stickers
so I borrowed one from the web
oldmodelkits.com has a wonderful selection by the way
There are certain things that are so unsettling that they make you look again to be certain that what you thought you saw really WAS what you saw. This abomination  (and a lot of other Blohm & Voss aircraft) is exactly one such thing. Looking a great deal like a bug that got caught in a window fan or perhaps something assembled with spare JU-88 parts this bizarre addition to the annals of flight is the product of B&V's habit of building asymmetric aircraft. It seems like they were trying to prove a point of style; but all it got them was a series of rejected ideas. A fuller description of the development and use of this odd bird can be found on Wikipedia.  I do have to think that the strutting little Nazi in his smartly turned-out uniform had nothing like this in mind when he wrote the specifications of a single-engine, multi-seat reconnaissance plane (doubtless he had something much more mundanely functional like a Henschel HS 126). One look at this aircraft would be enough to pop the monocle right out of your eye!
But enough about the plane, what about the kit? Frankly, it is horrible. First released in 1971 it shows it's age; huge rivets, thick plastic that is badly warped, poor parts fit, thick glass (and this bird has a lot of glass) and thick, stiff decals that are off-register (and after forty years are a medium amber color). Not one of Aifix's high points!
I won't bore you with the build; it involved a load of swearing, clamps, rubber bands and more swearing with a bunch of sanding and filing thrown in as well. I will simply say that it was a challenging model to assemble. 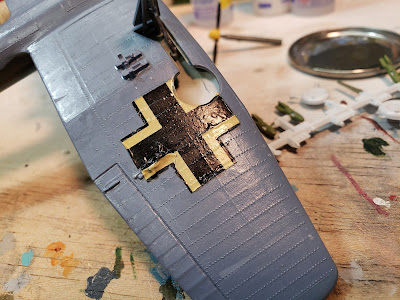 the decals were old, yellowed, and nearly as thick as the backing paper 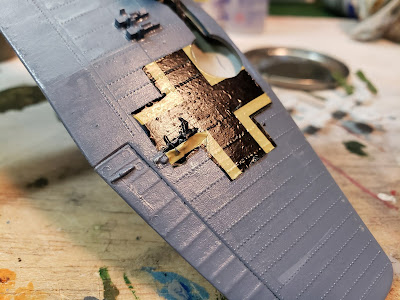 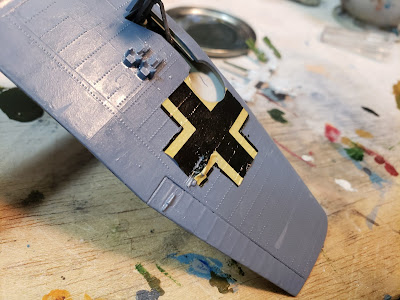 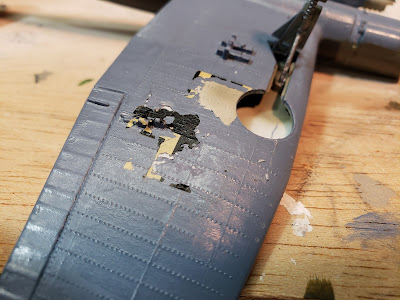 so I gave up and used the old "Scotch-tape lift" which left half the decal
still doggedly hanging on to the wing while the other half took the paint
off down to the primer, an unscheduled flight almost took place at this point
I was too far into this kit to quit now so I plugged on and cleaned it up,
after a repaint I dug around and found an old MPC JU-88 kit that I could
borrow some decals from and used those 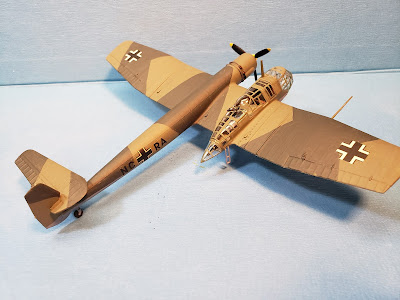 an abominable kit of a hideous aircraft,
this thing was so ugly that it deserved to be shot down 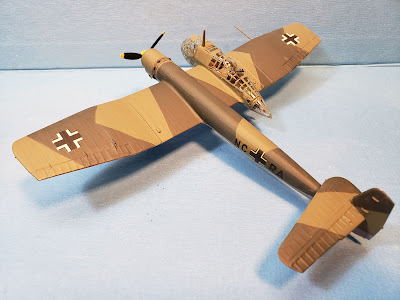 but it is the flagship of my "What Were They Thinking?" collection 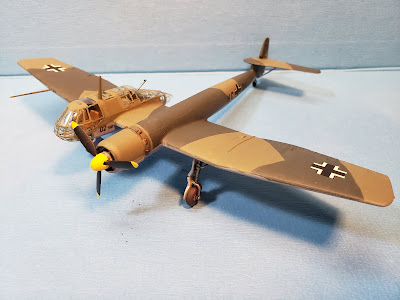 if you were to encounter this thing in combat you would ask yourself
"How can it be flying? half the plane has been shot away!" 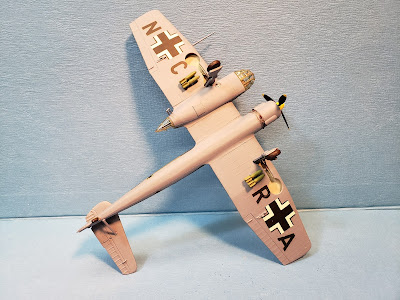 I built this one as a "shelf-sitter",
nobody wants to play a slow, poorly armed and unmaneuverable recon plane in a wargame 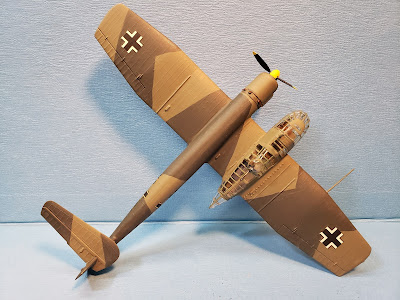 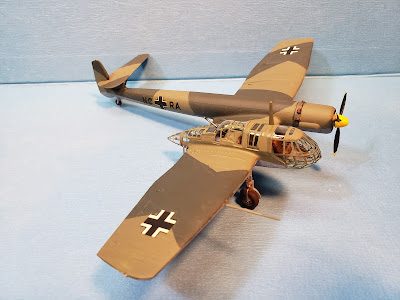 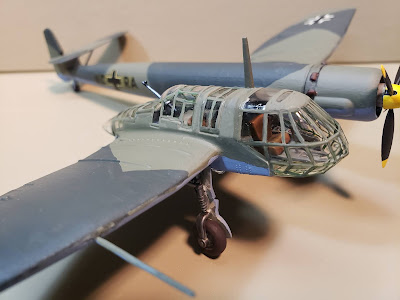 thank goodness for Future floor wax,
there is a lot of glass on this bird and it was hazy and dull
the Future put a shine on it! 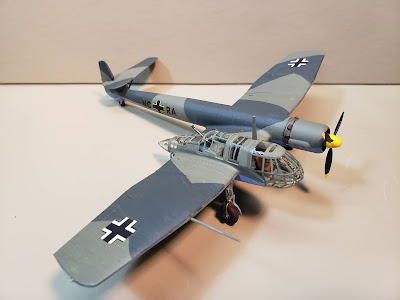 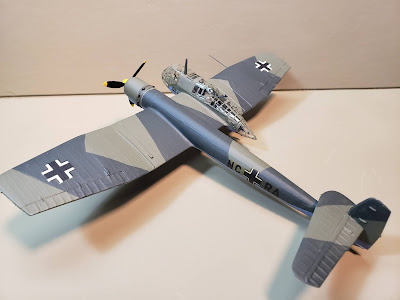 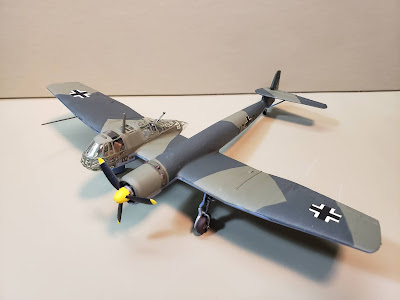 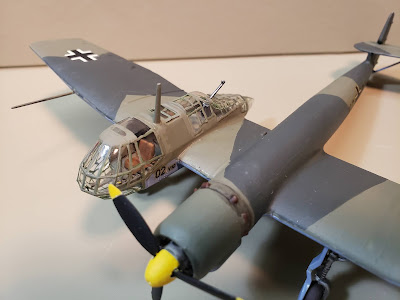 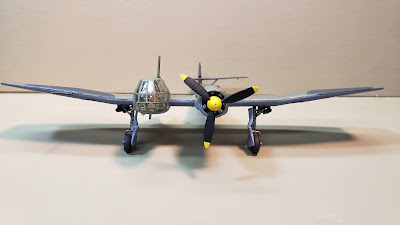 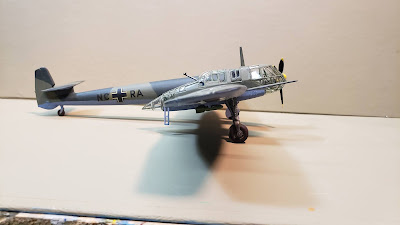 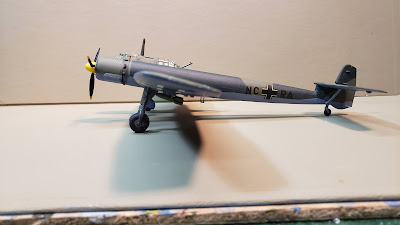 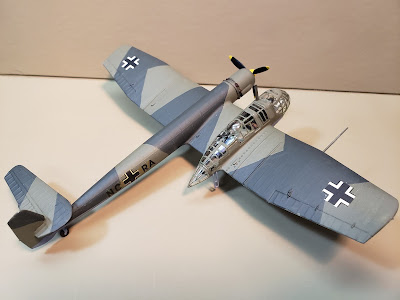 If you are a wargamer looking to add some recon to your collection run out and get the Matchbox HS-126 of the FW 189 , if you are a modeller looking for a challenge there is a beautiful kit in 1/48th scale from HobbyBoss, if you are a masochist looking to punish yourself then you might just want to run down a copy of this monster. A bad kit of a painfully unattractive airplane, avoid it if you can!
Posted by Anton Ryzbak at 9:33 AM