And now for something completely different..........

A couple of years ago Pat ran a Gorka-Morka campaign (free rules here) for quite a while. We had a blast clobbering each other's gangs while searching for scrap metal on the blasted landscape of the planet Gorka-Morka. Everybody else ran an Ork gang, but being a contrarian I chose to use a Grot mob. This had its advantages, for starters I had eight members when everybody else had four or five, Grot stuff is cheap and they have some interesting special rules. The downside is that they have limited improvement potential and that they die easily.

The backstory on the Grot mobs is that they are runaways from the oppression inherent in the system of Ork rule, which is (of course) the strongest rules. Particularly distressing (to the Grots that is) is their exclusion from boarding the great spaceship that the Orks are building to carry The Wahhh to other planets. These runaways have organized a collective society a long distance from the main Ork settlement and now are running a competing scrap collection operation. As they are styled on a Marxist model I chose to mimic the Russians and named all of my Grots after Communist Party members (well, the ones that mattered at least, members of the Proletariat only got numbers.....they died too quickly to merit names) .

Having agreed to the campaign I found that there was a serious shortage of models of Grots (the game having gone out of production years ago) and I had to dig around a bit to find them. The Grot vehicles were also nearly impossible to find and, when found, ridiculously expensive. Not wanting to spend a lot of money on what was an amusement I decided to model my own. As my Grot mob grew more numerous the models got bigger and bigger until the Great Land Cruiser was launched (impressive as it was it still crashed or blew up nearly every game). 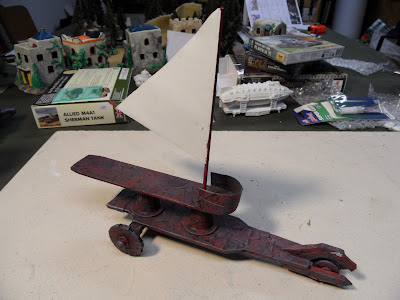 perhaps the best model of the lot was the first, the Sand Skate,
it was sleek, small, and seemed to lead a charmed life (never having been blown up) 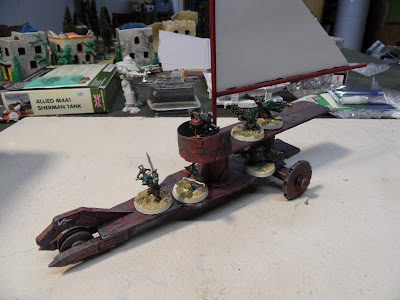 the Skate was designed to carry my entire eight man mob

Despite frequent and signiifcant casualties the mob kept getting bigger and I needed a larger vehicle and so the the Sand Snake was built. It was still wind-powered but it was nuch larger and could hold the entire mob and still hade a few spots open. A terrifying face was painted on the front and armored sheilds built along the sides to protect the crew. The Grots were much pleased. 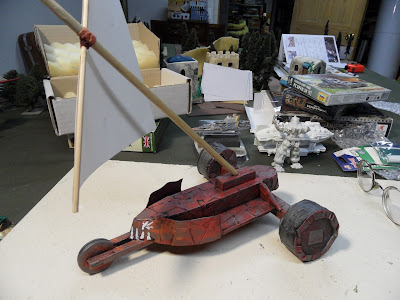 it was a beast compared to the Skate 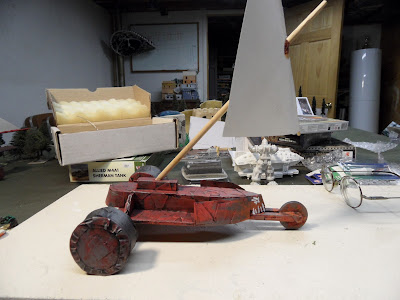 the great width allowed many more seats and provided good stability,
very aggressive styling too, not that the Orks were frightened 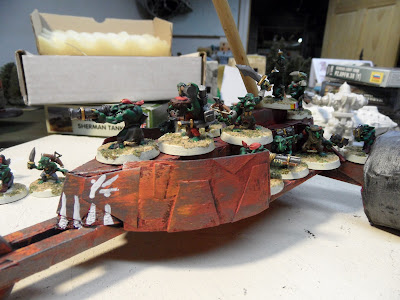 A desire to escape from the inconsistencies of wind power led me to build the Great Land Cruiser, that and the fact that the mob had once again exceeded the capacity of their ride. It also gave employment to the Grots that lacked ranged weapons (or any worthwhile ballistic skill) as they were employed sweating away at the crankshaft to drive it forward. The Great Leader now was riding in style. 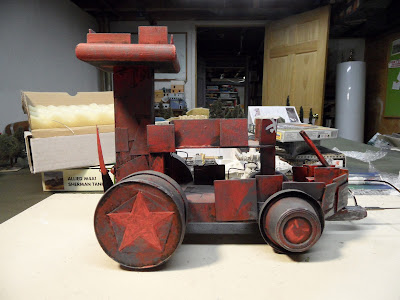 the vast bulk of the Cruiser is readily apparent 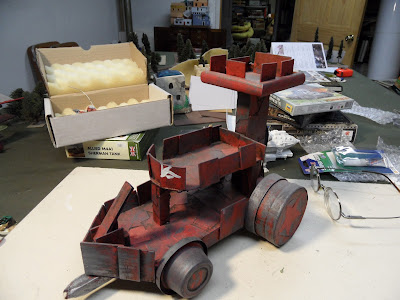 it towers over the battlefield 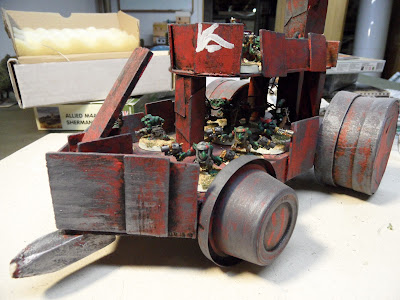 the lower decks teem with the sweating masses of the proletariat 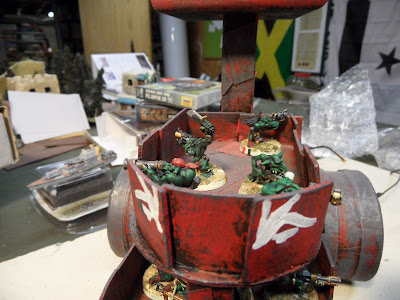 while the upper deck is reserved for the Red Guards 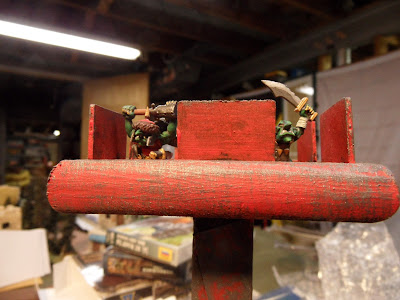 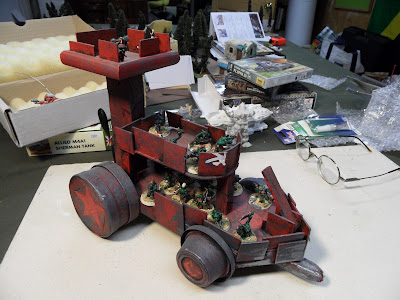 the Cruiser is a perfect metaphor for Grot society

I organized my troops into unit based on how combat effective they were. At first my mob was pretty much the same, I had a leader and a number two, the rest were basic Grots, half with Shootas and the rest with crossbows. As time passed and some Grots gained experience (while others died or were too crippled to carry on) divisions began to appear. This caused me to reorganize my force into two grades; Red Guards (who were better at shooting and hand to hand) and the Proletariat (who were really just there to do the grunt work). The Red Guards got the better equipment as more was expected of them when the fight began. This seemed to work well for a while until a few Grots really took off (well, mostly, they managed to avoid dying and got more experience than the rest) so I established the Assault Guards as a sort of creme de la creme of Grotty fighters. These brave souls were given armor,guns, grenades and shields and were expected to bear the brunt of every encounter. 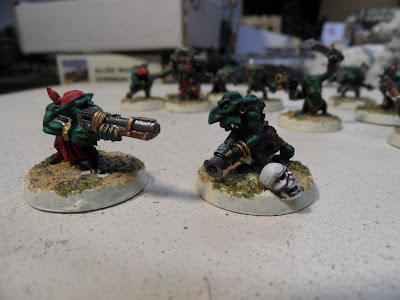 I have always like GW's grots, the whimsical maliciousness amused me
I added details like skulls to my best hand to hand fighters
so I could spot them more easily on the table 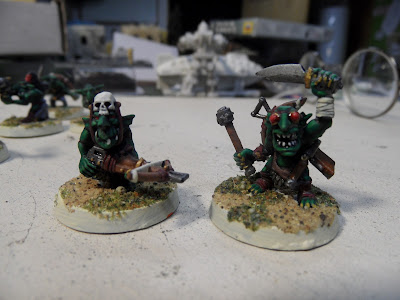 some Grots seemed indestructible,
these two fellows are survivors from my original list,
there are but two more such heroes 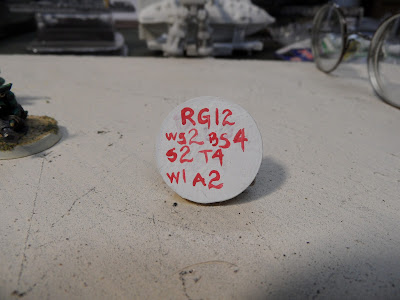 when dealing with mobs as large as fourteen figures I needed a way of keeping track of their stats so I took to painting their ID# and stats on the bottom of the bases;
this is Red Guard #12 he shoots well and is tough (for a Grot) so just barely gains the promotion
Posted by Anton Ryzbak at 1:46 PM