The day after the Great Hospital Raid the Rhodesians decided that the ZANLA guerrillas had gotten completely out of hand and, rather than relying on the local Constabulary, they called in the big guns; The Rhodesdian Light Infantry. This crack force of highly-trained, ultra motivated and very well equipped troops were deployed to reduce the level of rebel activity in the area. The mission was to recover the hostages (the ZANLAs had been collecting them over the past week or so), discover and destroy the rebel supply base, detach the rebels from sympathetic villagers, and kill or capture as many guerrillas as possible. The R.L.I. took that lengthy list in stride and mover swiftly into action.

Below we find the area of operations, this zone is known to be thick with ZANLA troops and there is evidence that the villagers are actively supporting the rebels. 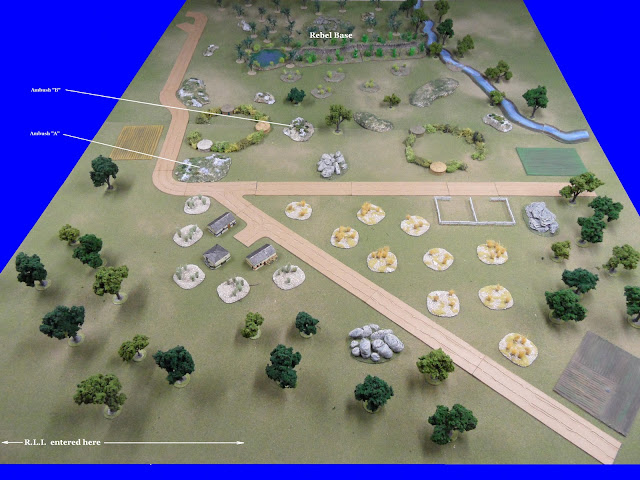 north is at the bottom of this view 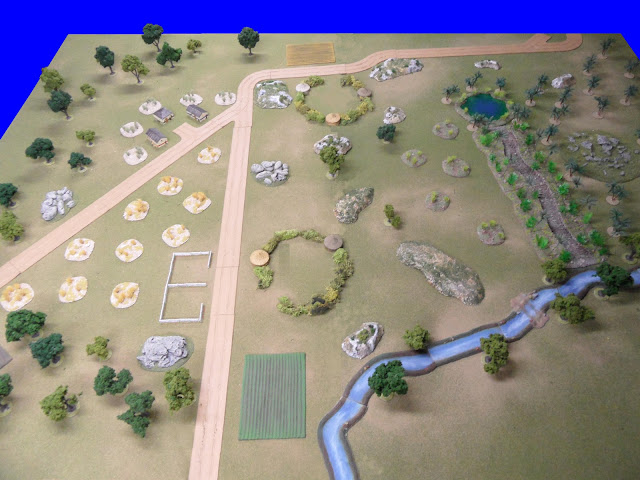 north is to the left of this view

The ZANLA players were tasked with defending their center of operations, which was hidden in the dried up river bed and the rocky ground near the southern edge of the table, they were told that there had been a fair amount of Rhodesian activity in response to the raid the day before and were expecting a counter-attack. The problem being that they had little idea where it might come from. Thus they deployed in an all-around defense, the level of success that this strategy met with will be shortly seen. Several local boys were recruited to act as look-outs, appearing to be innocent shepherds or farmers. The ZANLAs were allowed two ambushes and could place most of their units as "hidden" rather than as on Blinds (this being their home-turf and all). After much hand wringing and discussion the troops were deployed.

The R.L.I. swept in from the north, taking advantage of their superb training and drill they moved swiftly to their assigned positions and fanned out across the battlefield. 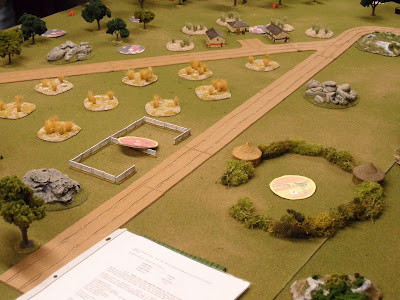 the R.L.I. blinds sweep in from the north as the ZANLA blinds await the onslaught 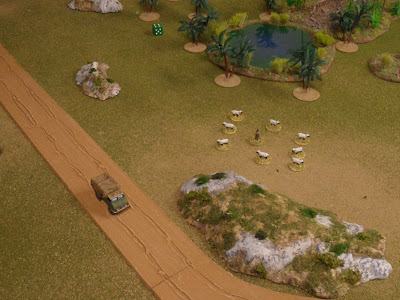 suddenly from the south-east a truck rumbled into the area,
this was carefully observed by the "shepherd" as it passed 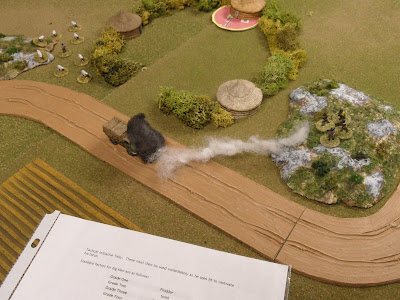 unfortunately the ZANLAs in ambush "A" got excited and fired their RPG,
particularly unfortunate for the poor delivery man 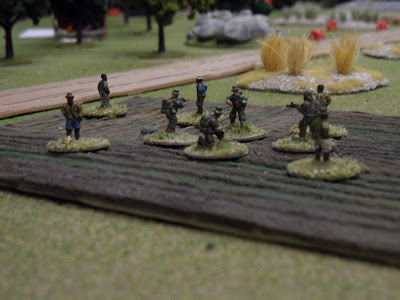 meanwhile, on the other flank, the R.L.I. were investigating some suspicious farmers 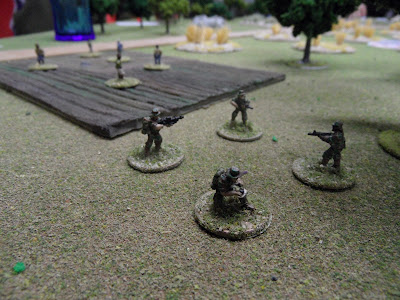 finding nothing actionable they moved on,
using a highly unconventional method of covering each others back 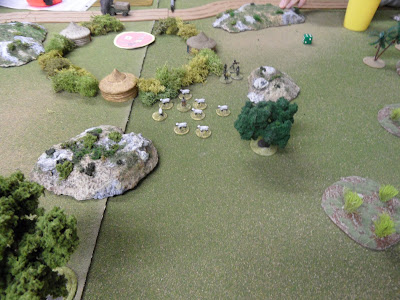 fearing the retribution of the rapidly advancing R.L.I. the RPG crew fled behind the village
causing the shepherd to try to find a less hazardous area to graze his flock 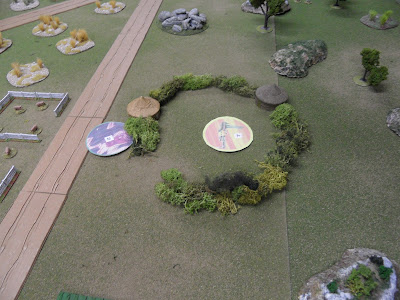 an R.L.I. blind trying to sniff out a ZANLA blind,
this is one of the beauties of the Two Fat Lardies system;
both players were acting with realistic caution,
knowing there was something there but unsure what it was 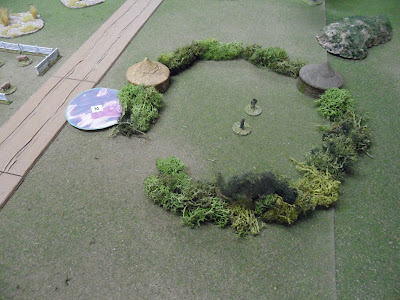 it turned out to be some villagers 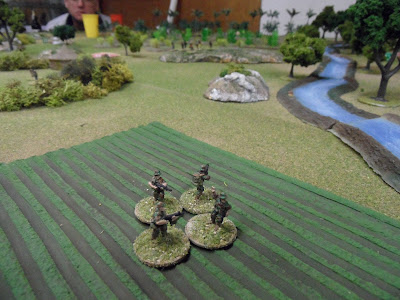 the western squad began to draw fire from the ZANLAs on a distant hilltop,
no casualties, little effect 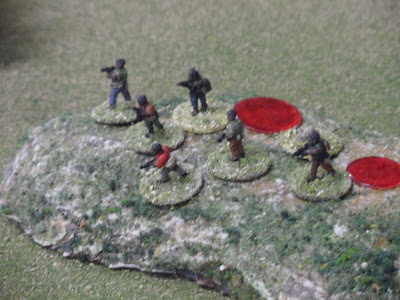 the return fire had a more noticeable effect 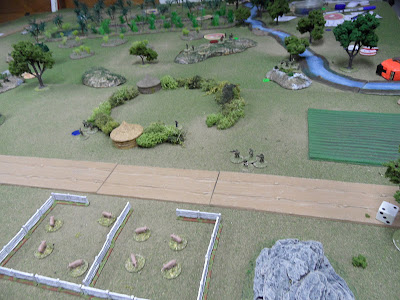 the western R.L.I. squad occupied a small hill as the support squad moved toward the center
to reduce the ZANLA second ambush (an LMG) in ambush position "B" 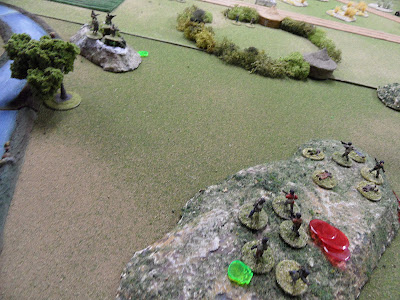 despite the addition of a second ZANLA squad the fight was still very much in the R.L.I.'s favor 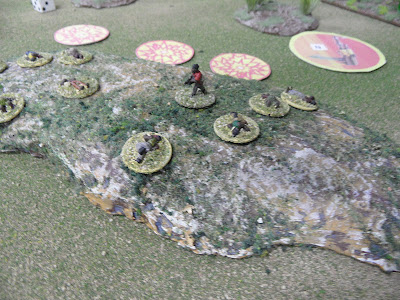 soon there was but one lone hero left 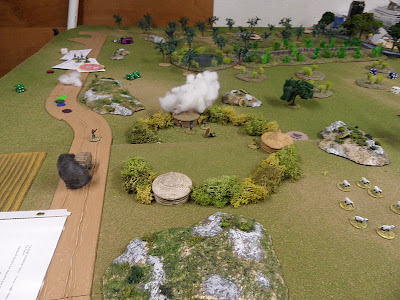 when sweeping the eastern village the R.L.I. encountered enemy fire,
it was quickly dealt with 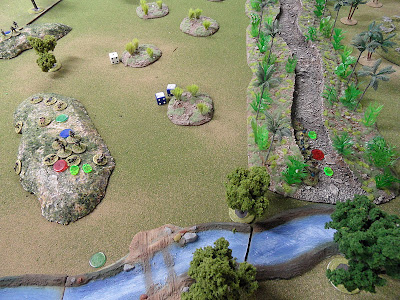 a desperate last stand by the remaining ZANLA squad tried to cover the withdrawal of the supplies and prisoners but largely resulted in additional casualties as the R.L.I. squads moved in for the kill

At the risk of sounding lie a broken record (dating myself, I am there) I really like the way these rules play. The random movement sequence and distance keeps thing "up in the air" and adds to the sense of chaos. The use of extra "dummy' blinds (one of the ZANLA blinds was a herd of pigs) keeps players from using the helicopter vision that so many games fall victim to.

A fun and very good-looking game, thanks Pat!
Posted by Anton Ryzbak at 9:24 PM