OK, I confess; I am a book junkie. I have tons of books on subjects military from prehistory to the Second World War. I have a particular soft-spot for Osprey publications (I still have one or two that I got "back in the day" when they didn't have numbers, from the Squadron Shop, it is priced at $1.95 US, my how the dollar has fallen) and have aquired a good many over the years.

The Men-at-Arms series has been a stand-out feature over the decades, I think that I have all of their WW2 and earlier issues. Three of the newest releases were of particular interest to me as they covered small and relatively obsure campaigns; #471 Armies of the Adowa Campaign, #472 Armies of the Irish Rebellion 1798 and #474 The Chaco War 1932-35. All of these off the beaten path subjects peaked my interest and I picked them up from Michigan Toy Soldier as soon as they were placed on display. They also fall into an odd place in the Osprey pantheon, sort of a campaign book, sort of a uniforn guide but not enough of either. I wish that Osprey would start an "Obscure History" series that combines both aspects in a format like their Essential Histories series.

Note, all of the pictures are photographs of the items that I have purchased for my own use, I accept no commission, donation or gratutiy on any item I review and purchase all items over the counter at retail prices. If Osprey objects to my use of the images or my reveiw of their products they are free to contact me by e-mail at daftrica 89 at yahoo dot com. The pictures are used to illustrate my reveiw and no infringement of copyright is intended. 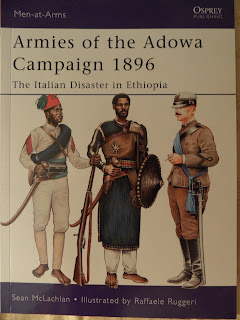 the art-work is up to the usual superb standard

This campaign is little-known in the Anglosphere for several reasons; first there hasn't been a cool movie about it, second it isn't about stalwart redcoats dodging disaster while gunning down spear-armed people with Martini-Henrys, third it was a defeat of a European Power by a native people (who played dirty by getting guns of their own!!!), fourth the Euros were Italians, and fifth the whole Empire thing is frowned upon by the mainstream of history buffs. Given all that I was taken aback that Osprey had undertaken to publish this work. I can also say that I am very happy they did so.

There is the ever-so-annoying timeline bit at the beginning but that is short (it was a short campaign) and it is quickly followed by an easy-reading synopsis of the the campaign that is reasonably even-handed and touched on most of the significant events. The text is peppered with superb black and white photos of combatants of both sides and a marvelous array of heavily mustachioed Italians (anybody who knows me is well aware of my interest in the mustache as an indicator of military prowess, sideburns well they are a different matter entirely).

The author has taken the time and trouble to photograph parts of the battlefield himself and did a very good job, it is clear that he understands the black-and-white medium and has taken photos that show very well that way. There are also a couple of good clear maps (like the one pictured below)  that set the stage and make following the progress battle easier. If you are of a mind to play colonials but wish to engage in something more balanced than the rifle-armed troopers gunning down native peoples armed with Iron-Age weapons this should tickle your fancy. I Very Highly Recommend this book to any follower of warfare in the late 19th Century. 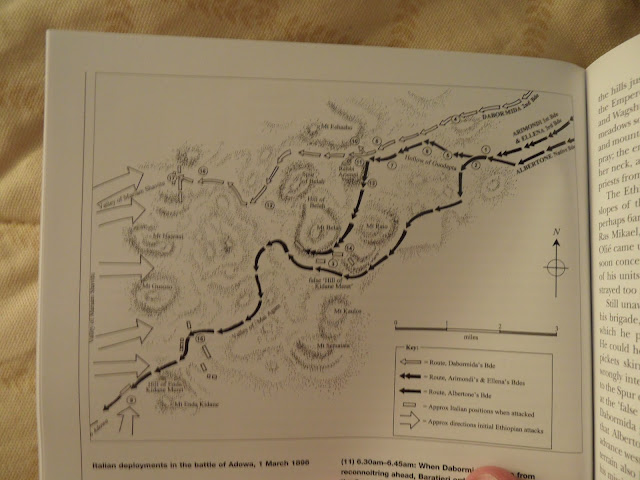 I love maps that use hachuring instead of terrain lines, they capture the period feel


The other half of my heritage is Irish so when I saw the next title, #472 Armies of the Irish Rebellion 1798,  I was well and truly excited. 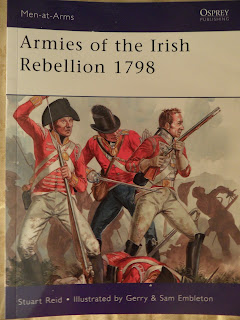 more of the superlative Osprey artwork

What I found inside was a bit of a let-down I must sadly say. Possessed of two sorry maps that show no detail whatsoever the text often makes references to places that fail to appear on either of the maps; this might work for a well-travelled Irishman who can see the land in his mind's eye but for the rest of us it is confusing and frustrating. I ended up reading the text with an old-fashioned atlas opened to Ireland just so I could orient myself. 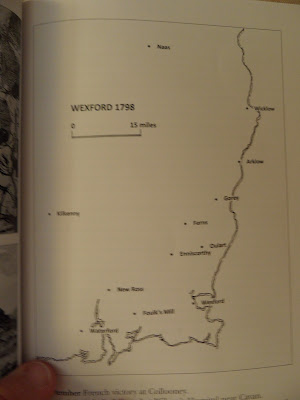 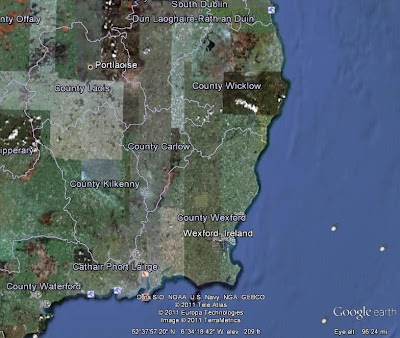 There is the obligatory chronology that uses up almost two full pages (of a 48 page book). This is a fixture of Opsreys that has always bothered me, is it really that hard to understand that events occurring in May of 1798 take place prior to events in October of the same year? I can almost understand it if the book spans the B.C./A.D. split, but otherwise, it is simply a waste of my money.

Fortunately the text makes great strides at redeeming this volume, they handle the narrative in a fairly even-handed manner and examine the dress of the combatants in detail. The illustrations are up to the standard expected of the Osprey brand. The period illustrations are largely from British publications and depict the Irish as violent, drunken brutes that look like monkeys (which is pretty close to what the average Brit thought of their neighbors at the time). They DO provide a good look at the clothing worn by the common folk at the time. If you are interested in the period this is a good place to start. It also has a decent bibliography. Highly Recommended.


The next title caught my eye as I had once lost a bet on the war involved, this war saw the first use of tanks in combat in the Americas (aside from MacArthur running over unarmed Bonus Army protestors-but that wasn't really a combat situation)  #474 The Chaco War 1932-35 was fought between Paraguay and Bolivia over land that was assumed to have oil deposits. The area called the Chaco had some poorly defined borders and until oil was discovered few cared for it as it is a dry and unpleasant land. 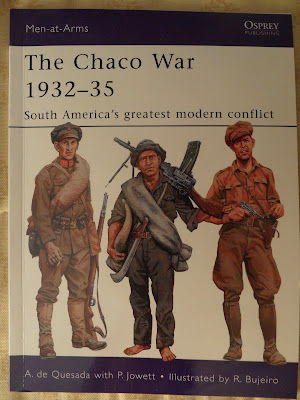 the artwork is delightfully atmospheric 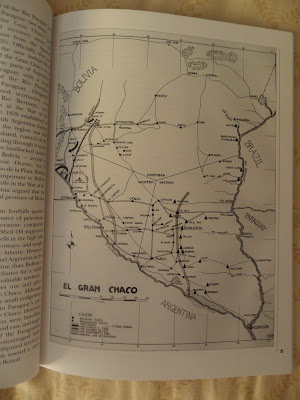 if you can't improve on an old map, just use it,
all of the locations named iin the text appear on this map

The campaign is dealt with in a clear and forthright manner and is easily followed on the period map that is used to illustrate the campaign, this gives a nice touch to the book as it is drawn in a style reminiscent of the era. Period photographs liberally fill the pages giving the reader an understanding of how the troops really looked in the feild while the color illustrations provide insight into the more formal uniforms that were intended to be worn.The uniforms are described in adequate detail to make it possible ﻿for a modeller or wargamer to find figures for the armies and are illustrated with artwork that captures the style of the era, it looks almost as if they were drawn from photos. They remind me of the Mollo drawings for his Armies of WW1 book. Very good indeed. If you are interested in South American conflicts, or just history generally, this is an excellent little book. Very Highly Recommended.
Posted by Anton Ryzbak at 1:57 PM