Goodies That I Got For Christmas

I have a wonderful daughter-in-law. She got me two very interesting books for Christmas this year, they embrace two of my favorite historical themes. First they both cover conflicts of extreme obscurity. Second, they cover Pre-Dreadnought naval conflicts. Needless to say I was excited the moment I saw them.

Taking them in chronological order I will look at the  Sino-French Naval War 1884-1885 by Piotr Olender, published by Mushroom Model Publications out of the U.K. ISBN 978-83-61421-53-5. This covers the "almost" war that lead to France taking over Indochina (and thus to the U.S. involvement in the Viet Nam War eighty years later) from the decadent Chinese Empire. It gives an overview of the conflict to place the naval operations into perspective but keeps to the main focus of the narrative firmly on the naval operations. The book provides complete fleet lists and data on each vessel. Heavily illustrated with period drawings, photos, scale drawings of some of the ships and perspective sketches it will fire the imagination. I found the modern maps left a bit to be desired but I am very demanding that way. Lots of material for wargaming, highly recommended. 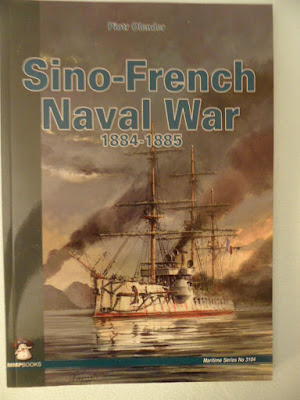 Next is a much thicker book covering the Sino-Japanese Naval War 1894-1895 same author and publisher, ISBN 978-83-63678-30-2. Following the same format the author ably provides a background to the tensions that started the war, a rough sketch of the land forces and a more detailed understanding of the opposing navies. Given that the conflict involved near-neighbors and actions all around the Korean peninsula, the Yellow Sea and as far afield as Taiwan this volume shows the important interplay between land forces and naval actions and gives context to otherwise seemingly pointless actions. The Chinese had made significant efforts since being embarrassed by the French a decade earlier but they were still fighting an uphill battle against a technologically superior force imbued with a more effective military attitude. Even more photos, drawings and maps than the last book this volume fills the hand and delights the eye. Lots of scale drawings and a complete list of ship data round out an impressive work. a goldmine of wargaming ideas here. Highly recommended. 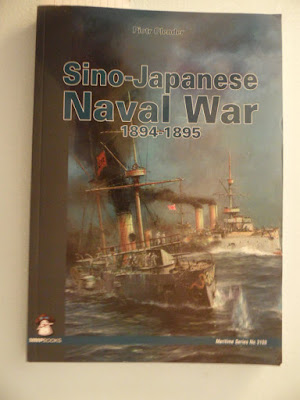