Continuing efforts to fill those hills.

Onwards to the first of the more flat topped buildings.  These buildings do have a slope to their roofs so I will have to puzzle over how to correct that, but herewith the Coaching Inn and Two story house with balcony.  I also tried saving these pictures as 'medium' instead of 'original' so maybe that will deal with the photo size issues. 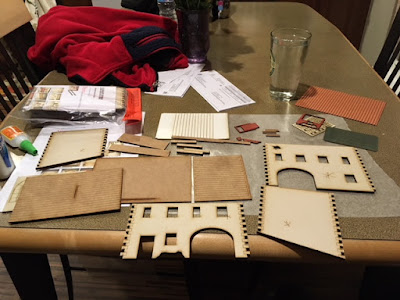 Here is the Coaching Inn right out of the bag.  This one has a very innovating design element, so you have something to look forward to as you read further. 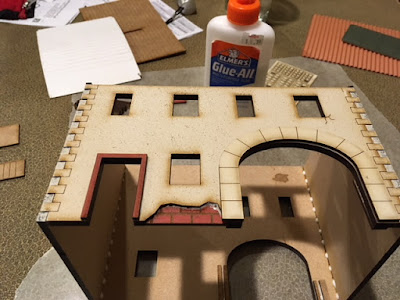 The first two steps are to glue in the brick widgets designed to show lower class buildings that have lost some of their stucco due to poor maintenance.  It is accomplished by leaving a hole in the main wall and gluing in a separate piece that looks like exposed bricks.  Then glue the four walls together.  I have shown the results of both here. 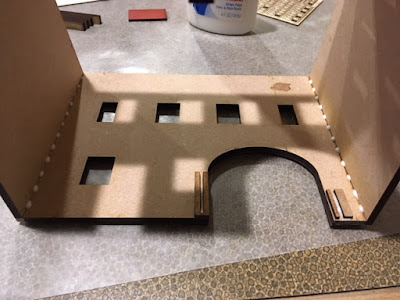 The next step is to glue in these four 'u-shaped' brackets which are needed for the design feature I teased earlier.  Naturally the company only shipped me three of the brackets so I needed to improvise a fourth which can be seen in the lower right of this photo. 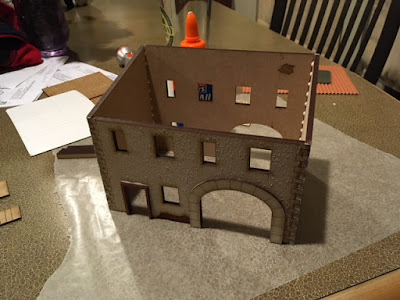 Next a brick façade has to be glued on to the front and back of a 'tunnel' through the building.  This was a common event in Roman buildings as developers would often build and connect two buildings and such an expedience allowed small street traffic to still get through while further accommodations were added for Rome's ever burgeoning population. 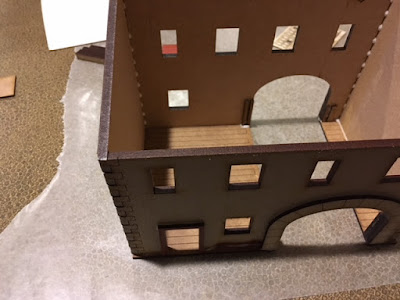 Here I have glued the floors into place. 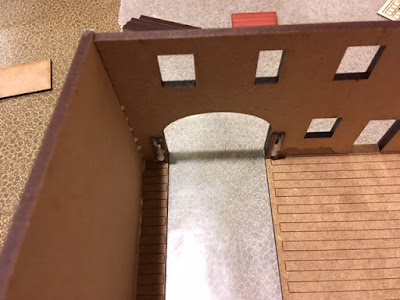 A bead of glue is added in the u shaped brackets. 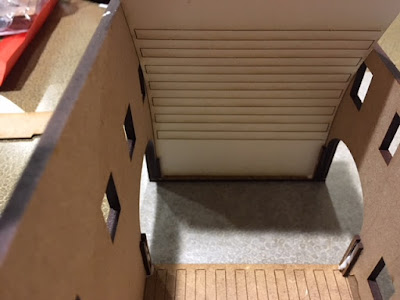 A very ingenious simulation of the tunnel through the building is created by a prepared piece of cardboard that has been scored, but not cut through as shown above.  These scorings allow the cardboard to bend well and the u shaped brackets secure the ends of the cardboard to hold it in shape. 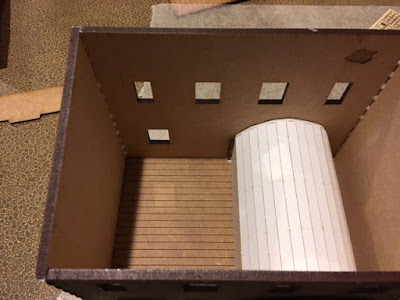 Here we see the finished tunnel from inside the building. 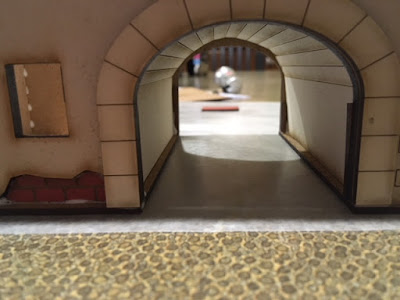 And here we see the tunnel from the front of the building.  It is not perfect, but my improvisation is probably the cause.  Well that and their failure to send me the proper number of the unique pieces! 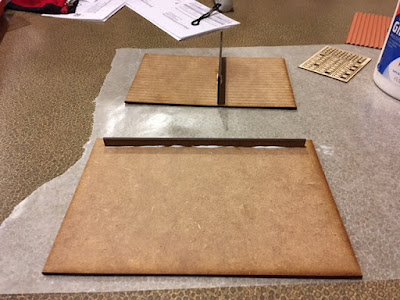 From there the standard gluing in some cross pieces.  In the second floor, floor at top the wall allows for easy movement of the removable floor.  At the bottom the cross bar is on the bottom of the roof support for the 'flat' roof.  The actual tiles will be glued on the other side that that piece of mdf keeps the roof from sliding off the building when in place. 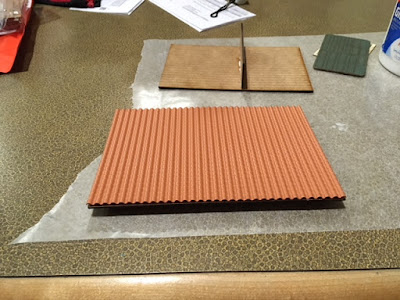 Here the tile roof is just a large sheet of the plastic.  Once again glued in place using Gorilla Glue and Elmers. 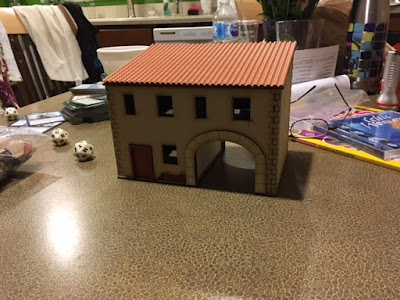 Here we have a finished picture from the front.


Next I am on to the Two Story house with flat roof and balcony. 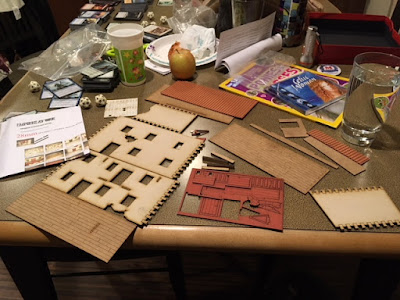 Here is the contents out of the bag.  It looks complicated, but builds easy. 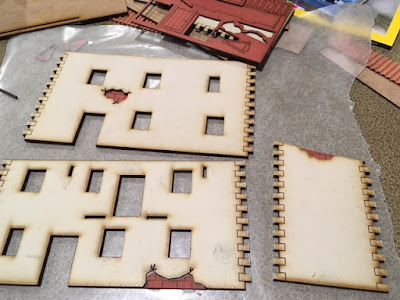 First thing up is gluing in the exposed brick. 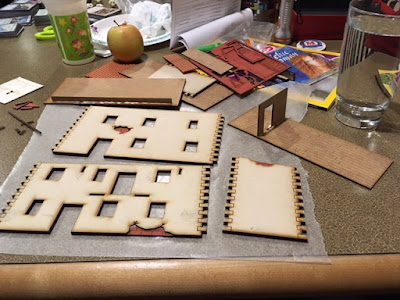 While that dries I went out of order and glued the roof brace and second floor wall in place. 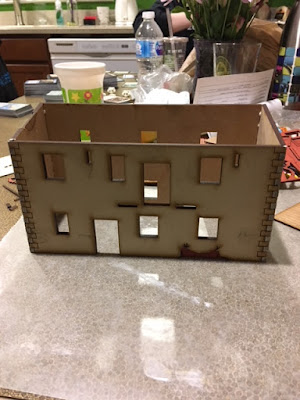 Next step is to glue the walls together. 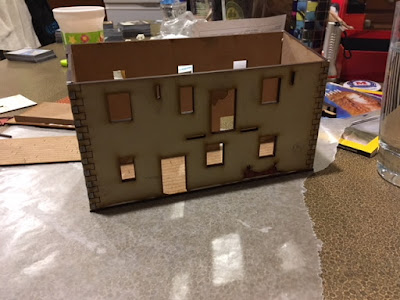 Glue the floor in place. 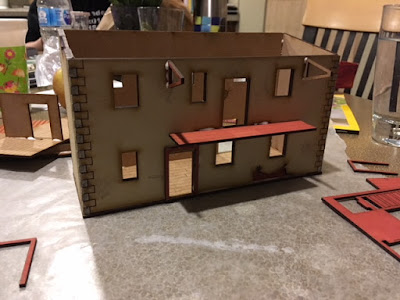 Next glue the Balcony floor, balcony awning, and door frames in place.  I will have to see how this one holds up.  The other buildings with a balcony had a single large tongue of wood that went in below the balcony door.  This one has two small slots in the wall for the balcony to be glued into. 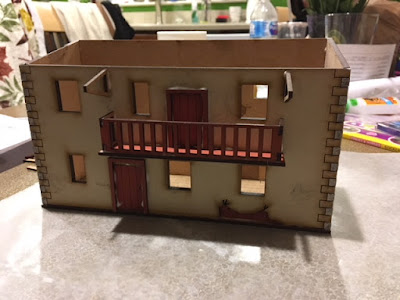 Next the balcony railing and doors are glued in place.  All of this companies doors and frames are a bit off.  Either the frame is too big for the doorway, or it is too small.  As long as you remember to put the smaller door on the balcony the doors fit fine, but the frames are always off.  The problem does not show in these photos as I am slightly above the door frames. 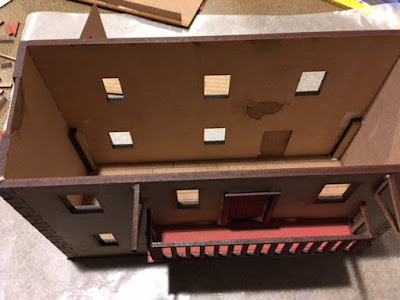 Nearing the end, the posts that hold up the second floor have to be glued in.  I learned on the tavern to try the floor in the space first and see how it fits.  If the fit is good then no care need be taken, but if the floor is too small for the space then the supports may require repositioning. 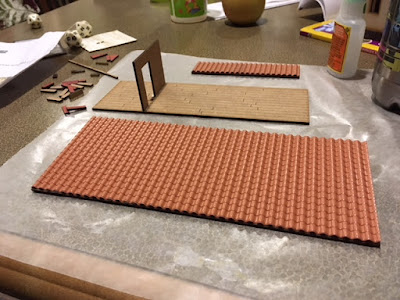 Lastly, all the plastic roof tiles need to be glued down.  I find that these flat roof sections do not glue down well unassisted.  Therefore I learned to turn the roof over and weight down the bottom of the roof support.  I leave this overnight to make sure the glue sets up well. 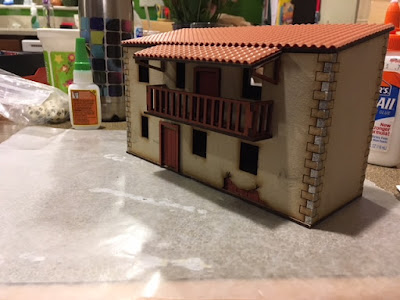 The next morning you have a finished house, front view. 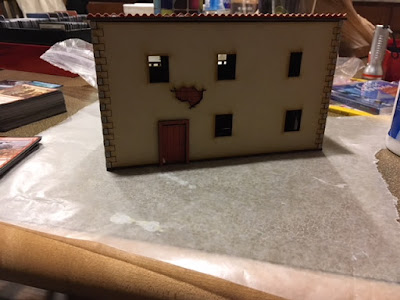 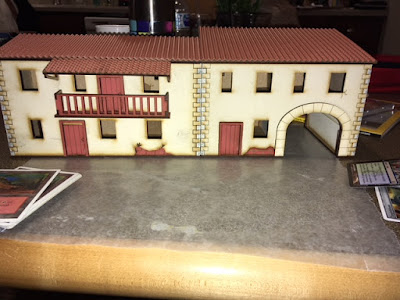 Side by side view of both building from the front with the flash to ensure a good view. 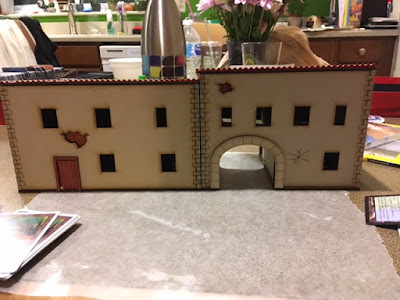 And finally a side by side view from the back.


These are much more the sort of thing that middling to poorer Romans lived in.  I am very happy with these kits.  The next building is two of the same thing a building that closely resembles one uncovered at Pompeii.  So one more post on Empires at War buildings once those are done.
Then I am off to the forum and Amphitheater sets from Sarissa.
Posted by The Housemartin at 5:31 PM